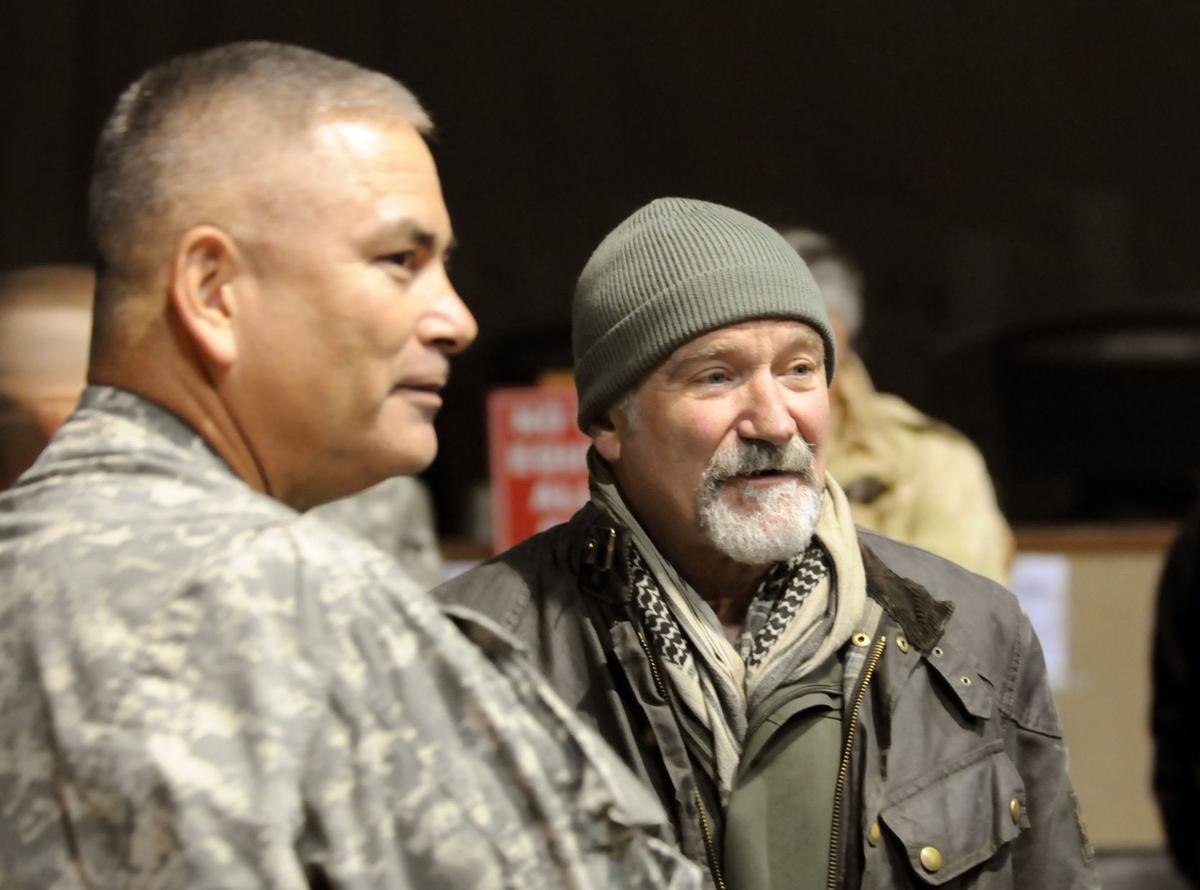 Actor-comedian Robin Williams, right, with U.S. Army Maj. Gen John F. Campbell, Combined Joint Task Force 101 and Regional Command East commander, before the 2010 USO Holiday Tour at Bagram Air Field, in Afghanistan. Members of the armed forces have long held special affection for Williams, 63, who died Monday after hanging himself in his San Francisco Bay Area home. Williams never served in the military, but he was a tireless participant in USO shows. 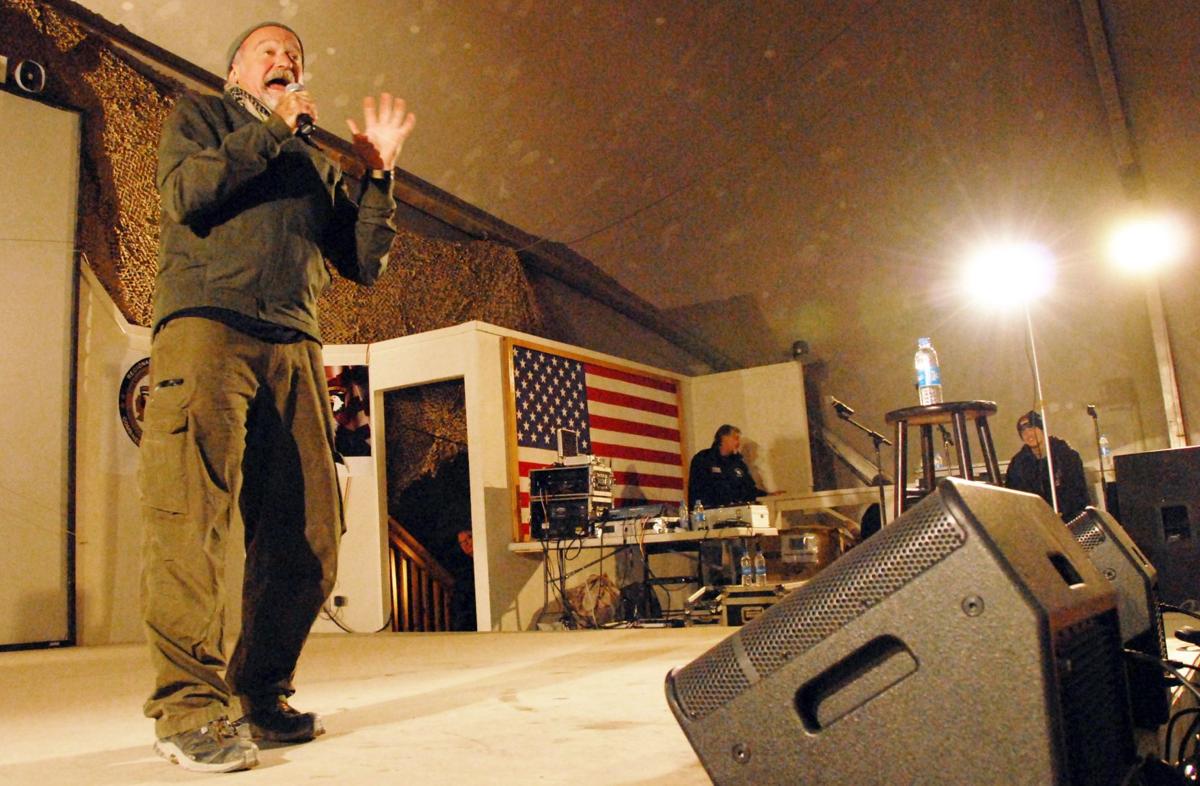 Actor-comedian Robin Williams, right, with U.S. Army Maj. Gen John F. Campbell, Combined Joint Task Force 101 and Regional Command East commander, before the 2010 USO Holiday Tour at Bagram Air Field, in Afghanistan. Members of the armed forces have long held special affection for Williams, 63, who died Monday after hanging himself in his San Francisco Bay Area home. Williams never served in the military, but he was a tireless participant in USO shows.

SAN RAFAEL, Calif. — Although police have now revealed how Robin Williams committed suicide, the Oscar-winning actor’s fans, friends and even family continue to struggle to understand why someone who spread so much joy throughout the world could find so little in his own life that he decided to stop living.

Williams, who made no secret of his decades-long struggles with depression and substance abuse, killed himself by fashioning a noose out of a belt and hanging himself, authorities said Tuesday.

The frenetic funnyman who starred in such films as “Mrs. Doubtfire,” “Good Will Hunting” and “Good Morning, Vietnam,” had announced only last month that he was re-entering a 12-step program to get his life back on track after months of nonstop work. His publicist confirmed after he died that he had been suffering in recent weeks from a serious case of depression.

Still, even family members were caught off-guard when his body was found in his San Francisco Bay Area home Monday morning.

“I’ll never, ever understand how he could be loved so deeply and not find it in his heart to stay,” his 25-year-old daughter, Zelda Williams, said in a poignant statement released Tuesday.

“He was always warm, even in his darkest moments,” she noted, adding she last saw her father when he recently celebrated his 63rd birthday. It was a day, Williams recalled, that she and her two brothers spent “sharing gifts and laughter” with their father.

Marin County Sheriff’s Lt. Keith Boyd said Williams was last seen alive by his wife, Susan Schneider, who went to bed around 10 p.m. Sunday. She awoke the next morning and left the couple’s Tiburon home, thinking he was asleep somewhere else in the house.

When he didn’t answer a knock on the door a short time later, his personal assistant found him dead in a bedroom. A pocketknife was nearby and Williams also had superficial cuts on his wrists.

Boyd said all evidence indicates the actor committed suicide by hanging himself. A final ruling will be announced after toxicology reports and interviews with witnesses are complete.

The lieutenant declined to say if a suicide note was found.

“We still have people we want to speak with so there is some information we’re going to withhold,” he said.

Like Williams’ family members, fellow actors and comedians were devastated by the news.

“I never could have expected this ending to his life and to ours with him,” said Chevy Chase who noted that he, too, suffers from depression.

But, Chase added, “I cannot believe this. I am overwhelmed with grief.”

The circumstances of the death do not help explain what motivated Williams, suicide experts said. Understanding that would require a detailed “psychological autopsy” that includes the review of medical and other records, and interviews with family and friends.

These experts stressed that suicide rarely is triggered by a single factor, such as depression or substance abuse. Typically there are at least two such influences, often compounded by acute stress, such as from financial hardship or troubled personal relationships.

“We know from decades of research that there are numerous factors that contribute to suicide risk,” said Michelle Cornette, executive director of the American Association of Suicidology.

Word that the actor had killed himself also left neighbors stunned and grief-stricken in the quiet, waterfront neighborhood of Tiburon, where Williams was a popular figure.

“I’m shocked. I loved him. I loved his sense of humor. I loved the spontaneity of his life,” neighbor Johanna Dunning said of Williams, who was often seen riding his bicycle through the neighborhood or stopping to joke with kids.

Makeshift memorials of flowers and notes popped up around the country including on his star on the Hollywood Walk of Fame, at his home and outside the house in Boulder, Colorado, where the sitcom “Mork & Mindy” was set.

People also gathered to remember Williams at a bench in Boston’s Public Garden where he filmed a scene for “Good Will Hunting,” the film that won him an Academy Award.

Ben Affleck, a co-star and co-writer on that movie, was among the legions of friends and fans who shared tributes online.

“Robin had a ton of love & did so much for so many. He made Matt & my dreams come true,” Affleck said of himself and fellow co-star and co-writer Matt Damon.

“What do you owe a guy who does that?” Affleck asked on Twitter. “Everything.”

Williams’ family asked that his fans remember him as the kind-hearted man that he was.

“Yesterday, I lost my father and a best friend and the world got a little grayer,” his son Zak Williams said in a statement. “I will carry his heart with me every day. I would ask those that loved him to remember him by being as gentle, kind, and generous as he would be. Seek to bring joy to the world as he sought.”