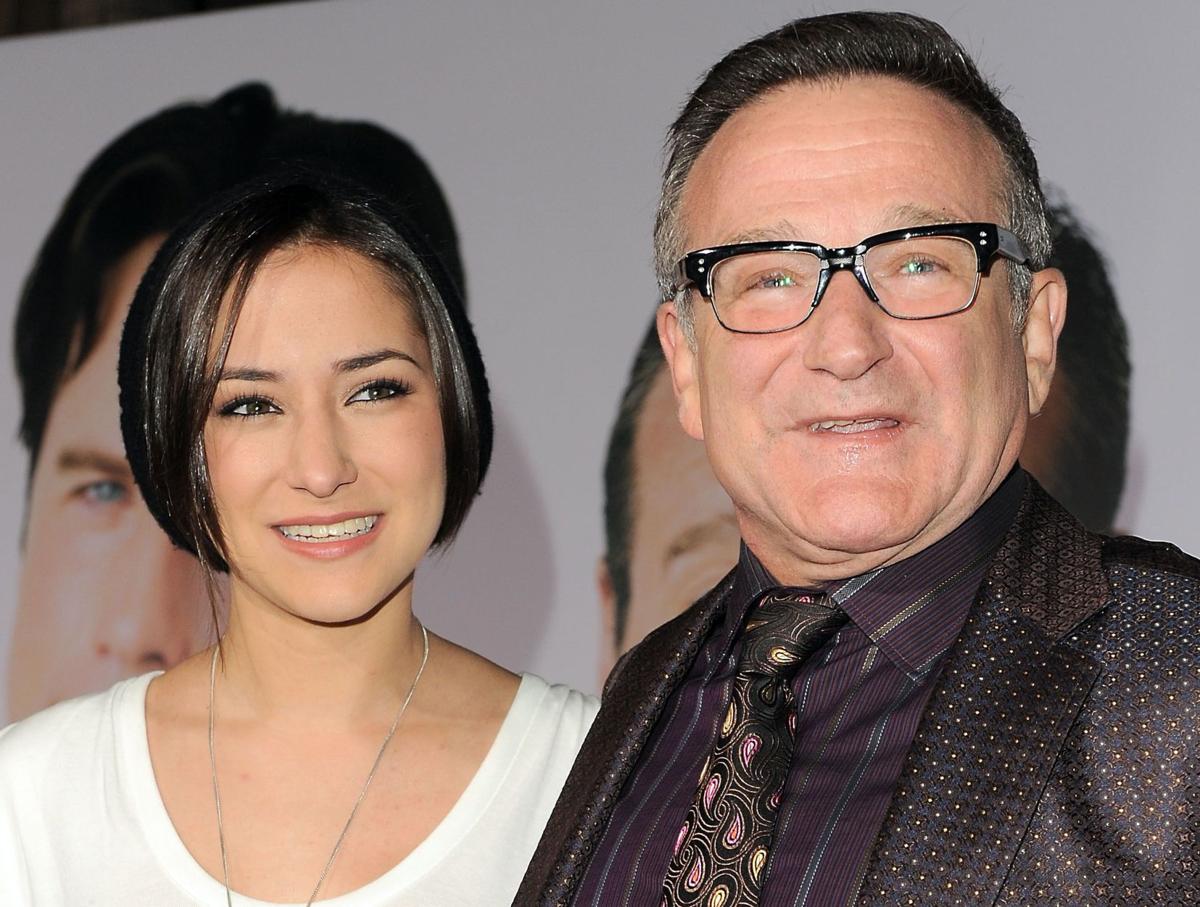 Actor-comedian Robin Williams performs his stand-up show, “Weapons of Self Destruction,” at Town Hall in New York in 2009. 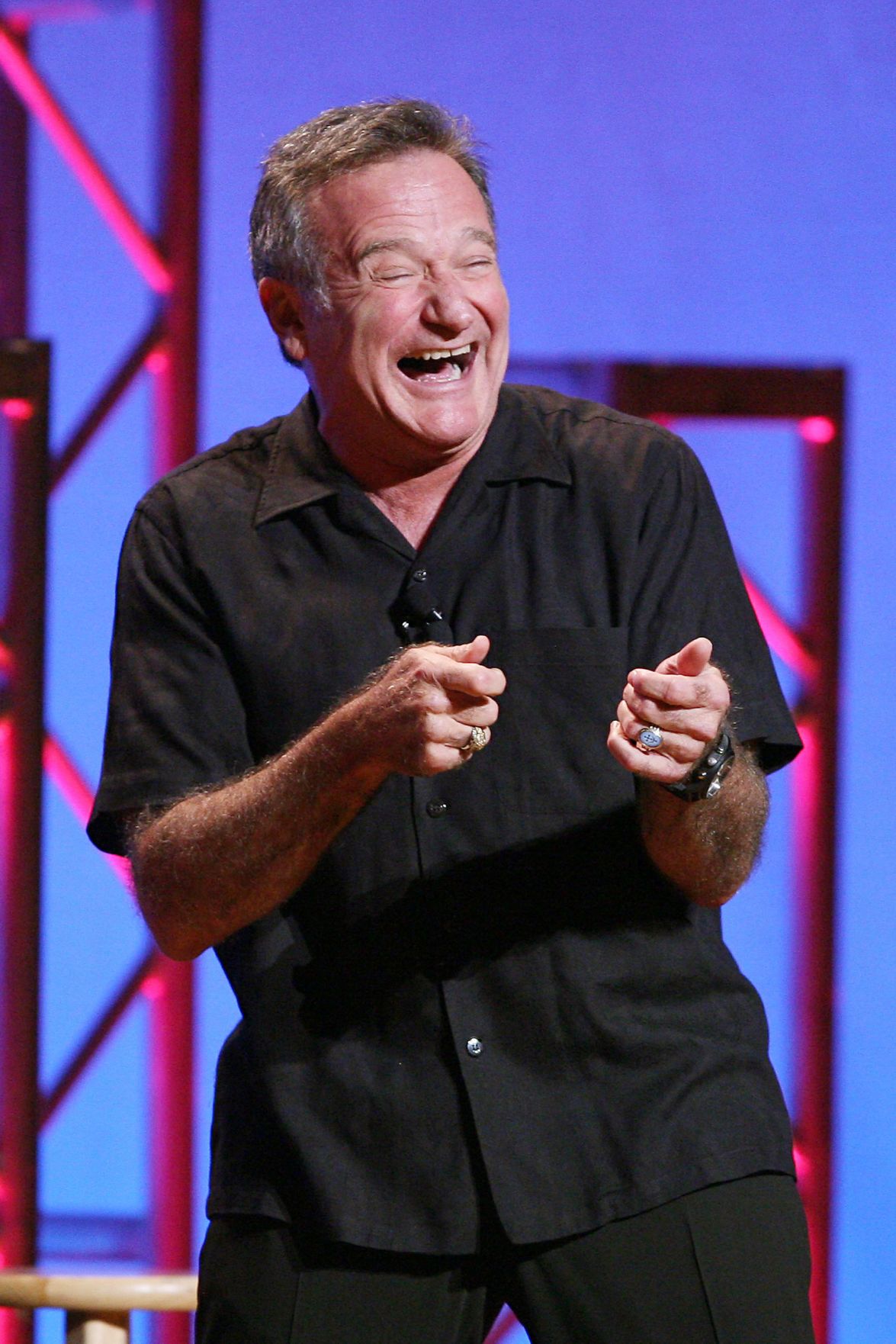 Zelda Williams, left, is pictured with her father, Robin William,s at the premiere of “Old Dogs,” in Los Angeles in 2009. Robin Williams died of an apparent suicide Monday. The magnitude of the shock over Williams' death has been matched only by the outpouring of grief for his loss. “I'll never, ever understand how he could be loved so deeply and not find it in his heart to stay,” said Zelda Williams, 25. “He was always warm, even in his darkest moments.”

Actor-comedian Robin Williams performs his stand-up show, “Weapons of Self Destruction,” at Town Hall in New York in 2009.

Zelda Williams, left, is pictured with her father, Robin William,s at the premiere of “Old Dogs,” in Los Angeles in 2009. Robin Williams died of an apparent suicide Monday. The magnitude of the shock over Williams' death has been matched only by the outpouring of grief for his loss. “I'll never, ever understand how he could be loved so deeply and not find it in his heart to stay,” said Zelda Williams, 25. “He was always warm, even in his darkest moments.”

Every writer fears the blank page. Every comedian dreads silence at the end of a punch line. Every creative soul quivers at the prospect of brush touching canvas or fingers reaching for keyboards and finding – nothing.

In all the tributes to the propulsive force of genius that was Robin Williams, in all the helpful pivots from a celebrity’s suicide to the larger issue of depression that cripples millions, we may have forgotten one obvious thing about him. Williams was a showman – perhaps the most vulnerable of public people. And in the digital age, when trolls can make a piñata of even the most gifted performers, the pressure on those on stage or in the arena has never been greater. Nor has the arc from triumph to tragedy been shorter.

In 2008, Williams was trying out new material at the Showbox in Seattle, a small venue. He was coming off a string of mediocre movies and unkind reviews, and was trying to dig his way out of a career hole. That night he did the work of 12 comedians, all the manic flights, the voices, the riffs, sweating through his shirt and gulping bottled water like a marathon runner. He was Springsteen in encore, Michael Jordan in double overtime.

Afterward, in his cramped dressing room, he appeared deflated, exhausted, spent and, as is often said of famous people when you meet them in real life, smaller than his screen self. We complimented him on the new stuff – he had killed, leaving the room in tears of laughter. “Really?” he asked in schoolboy hunger for a pat on the head. “Did you really like it?”

On stage, he owned the room. Backstage, he was lonely and needy and a little out of breath; laughter was his oxygen. Two years later, in a podcast interview with the comedian Marc Maron, he offered another glimpse of the pressure to create and remain fresh. “You bottom out,” he said. “People say, ‘You have an Academy Award.’ The Academy Award lasted about a week, then one week later people are going, ‘Hey, Mork.’ ”

Williams needed those nights in Seattle (he donated all the proceeds to a food bank, without making a fuss of it), because artists need room to fail. But I’m not sure that our era, in which everything is exposed, shared and composted in less time than it takes a cup of coffee to go cold, allows for these creative resuscitations anymore.

Look at the most savage reaction to Williams’s death. Rush Limbaugh said the suicide “fits a certain picture, or a certain image that the left has.” He said later he was talking about the “liberal media,” but he was doing what he always does: Finding the most heartless thing to say about a situation that requires a teaspoon of genuine empathy. On the Glenn Beck website for “The Blaze,” the hate flowed. “The way I look at it, that’s one less Hollywood lib-prog donor and voter,” one reader wrote in the comments. There were many others in the same vein. Harassment from Internet trolls forced the comedian’s daughter, Zelda Williams, to shut down her social media sites “maybe forever.”

We’ll never know if the bullies with public forums could drive Williams, who was 63, to severe depression. So much of chronic melancholy has more to do with clinical issues of the brain than immediate slights. And if Williams was indeed suffering from early stages of Parkinson’s disease, as his wife, Susan Schneider, announced Thursday, he could have sensed a coming diminishment of his talents.

Life events can trigger a downward episode. And Williams, as an artist, was highly sensitive to nuances of success or failure, and the accelerated cycles of those two sides in the 21st century.

He once said he heard “a little voice saying, ‘You’re garbage, you’re nothing.’” He did a riff, comic with a ring of haunting truth, about his GPS steering him over the Golden Gate Bridge. “I said: ‘Why? Have you seen my movies lately?’”

Ernest Hemingway, often called the greatest writer of the 20th century, realized that creativity has its own land mines. “That terrible mood of depression of whether it’s any good or not is known as the artist’s reward,” he said. Hemingway was emotionally wounded by the negative reviews of a novel published in 1950, “Across the River and Into the Trees.”

Were he around today, a tortured, possibly medicated Hemingway would probably be hiding under his boat in Cuba. He would certainly hope, as all creative types do, that the well would never run dry. But he might find the pressure to do something original too much in the modern age.

My plea here is for people to give the needed space to artists and performers to fail every now and then, and to understand how exposed someone feels when trying something new. The trolls, the Twitter executioners and the like should save their savagery for those who are famous for being famous.

“You’re only given one little spark of madness,” Williams said. “You mustn’t lose it.” Finding the strength to keep the spark from going dark, as it turns out, was probably the great struggle of his life.

Williams was a showman – perhaps the most vulnerable of public people.