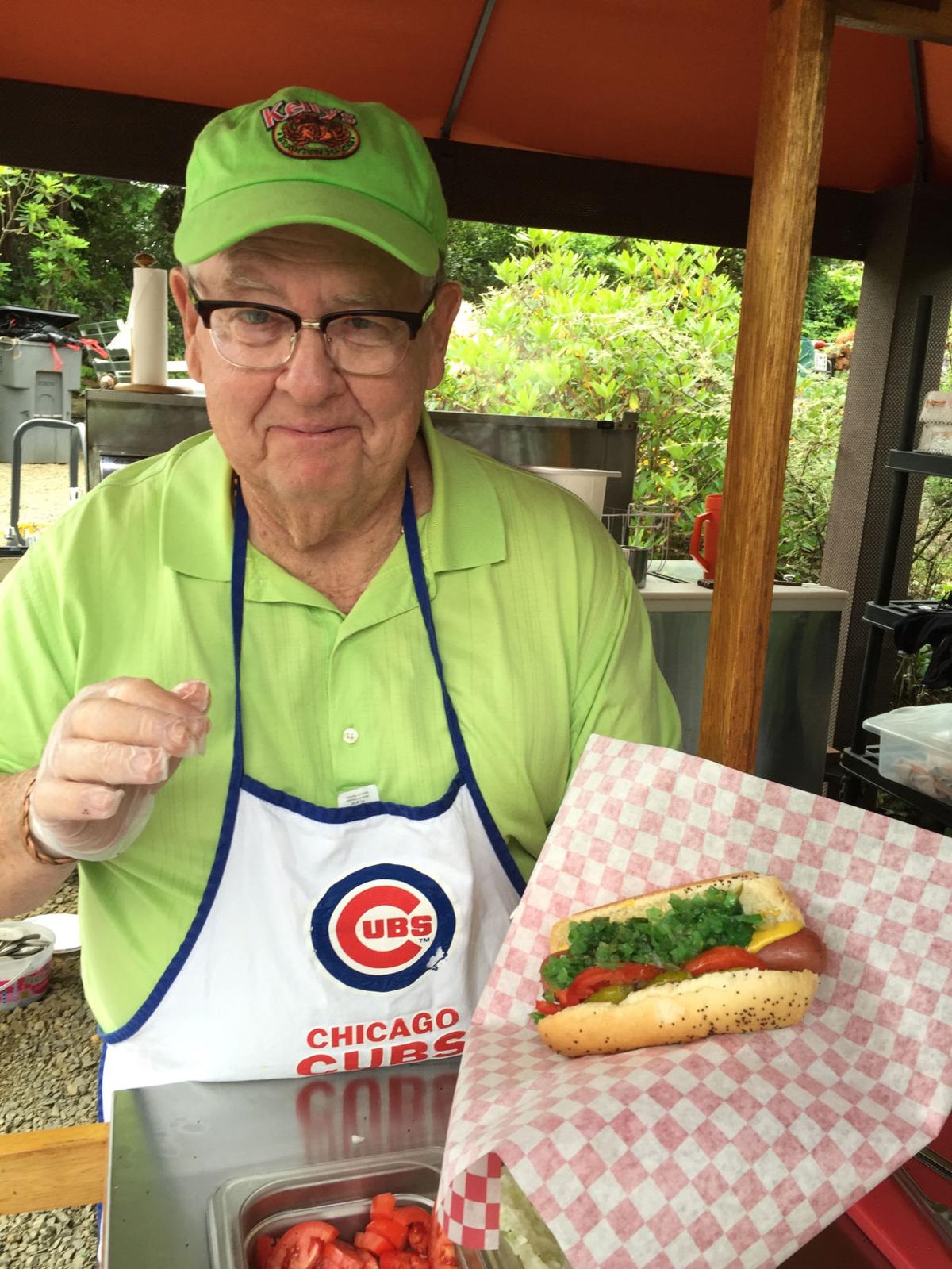 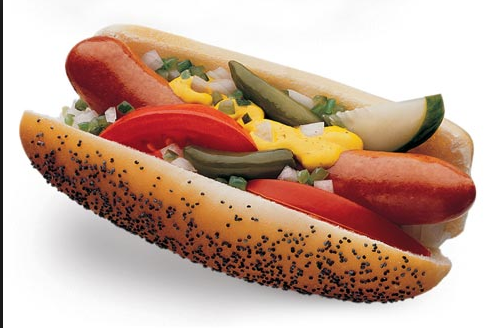 Jim Mudd knows his Chicago dogs: Vienna all-beef frank, sesame seed bun, sliced tomatoes, pickle strips and even the secret ingredient: celery salt. I know this because I once had a Chicago dog party with these same ingredients, ordered direct from Vienna Beef Products and delivered to my home in dry ice. I fired up the Weber gas grill and cooked them to perfection, spiked with fork tines to let the dogs breathe and the juices sizzle, slightly blackened to perfection.

Let’s put it this way: it was a huge hit, even vegans slammed them down — albeit without the frank.

One of the guests was headed to Club Fed for a federal crime — a Ponzi scheme in which he netted a paltry $2 million. Little did we know at that event as he chugged down dog after dog that this, he felt, was his last meal before his departure. I had purchased about 72 hot dogs and 24 Polish sausages (a misnomer, really, fatter than the hot dogs, but not a Polish kielbasa as many know it) — and thought I would have enough for the 22 guests. Our felonious friend, however, devoured the hot dogs with such gusto that other guests started complaining they weren’t “getting enough Polish.”

He ended up, I think, eating about eight of the dogs and four of the Polish. Considering that he wouldn’t be eating any more for three to five years was some solace, I liked to think I gave him something to look back on as he served his time.

Chicago dogs can do that to people. As a kid in the suburbs of Chicago I was a veteran of Stash’s Place, a pioneer of the genre. These were different than the flat-dogs you would get at the Woolworth’s counter on a buttered bun. Instead, the buns were soft without being too bready, the sport peppers sharp and biting and a little too risqué for a 10-year-old, and the Polish sausage serving as a template for all hot dogs to come.

Since that time I order Chicago dogs wherever I see that signature sign.

In New York they just didn’t get it. I don’t think they ever knew how to do a Chicago dog, and I scoured the five boroughs and suburbs. I think their allegiance to the “dirty water” dog — served in a Sabrett steam wagon, slathered with sauerkraut and mustard — was just too great.

In Los Angeles, friends told me Pinks was the place to go for most dog-lovers (“Number one in California”), but frankly, they didn’t really wow me. Yes, I liked the room on Sunset, with the old train motif, but no, it wasn’t a Chicago dog. They could do Philly Cheesesteaks like they make in Philadelphia at Great Western on Venice Boulevard, but the Chicago dog was not an option.

My son, Sam, took me to Zach’s Shack on Hawthorne in Portland. Their Chicago dog is excellent. Nick’s Coney Island makes “good dogs,” Sam tells me, but while they say they do Chicago dogs on their site, “the ingredients are wrong. Zach’s is legit.”

I think Tsunami Dog in Seaside serves the best frank in town, but while you can get the “Kite-Flyer,” “Highway 101” and “The Bonfire,” the Chi-town connection is lacking. So that brings me to some good news for the local hot-dog purist.

Jim Mudd has dedicated himself to the Chicago dog. That’s all he sells at Mudd Dog Stand in Manzanita. Set back in a courtyard on Laneda near the beach, Mudd celebrates the Chicago dog with devotion, manning the cart as his wife Lynn pitches in.

It would be enough for Mudd to stand proud as the Sears Tower of hot dogs carts, but he’s got an even loftier side. Mudd is a board member and co-founder of the Mudd Nick Foundation, a charitable organization for kids.

Arts and humanities, science, technology, engineering and math, higher education and careers, camps, literacy, sports, community, children with special needs and talented and gifted — all are supported by the foundation, whose programs are described as “learning experiences that stimulate children to aspire to their greatest potential and pursue their dreams.”

Mudd and Doug Nicholson, friends since their days at Oregon State University, decided to start a coed golf tournament in 1990, which they christened the Mudd Nick Invitational.

In 2006, the Mudd Nick Foundation was formed as a 501(c)(3) nonprofit and a board of nine directors was selected to develop a mission.

Over the last nine years, more than $1 million has been raised to support 30 to 50 programs every year.

A former Bridgestone executive, Mudd and his family “moved all over the coast.”

“When we retired, we came out here,” he said. “This was my parents’ home. Since this is the last chapter of my life, I thought what can I do to help? I thought we could open a hot-dog stand, a Chicago-deal like I’ve eaten all my life, and we’d draw people in and we’d talk about the Mudd Nick Foundation.”

It worked. The hot dogs draw people in, and Mudd spreads the word. With international visitors to the coast, Mudd has attracted donations from people around the world. “It’s been a great ride,” he said.

The Mudd Nick Foundation celebrates its 27th annual fundraiser in September. The pre-golf tournament dinner takes place Sept. 16, followed by the foundation’s annual charity golf tournament at Manzanita Golf Course. The annual dinner will be held the next day. They probably won’t be serving hot dogs.