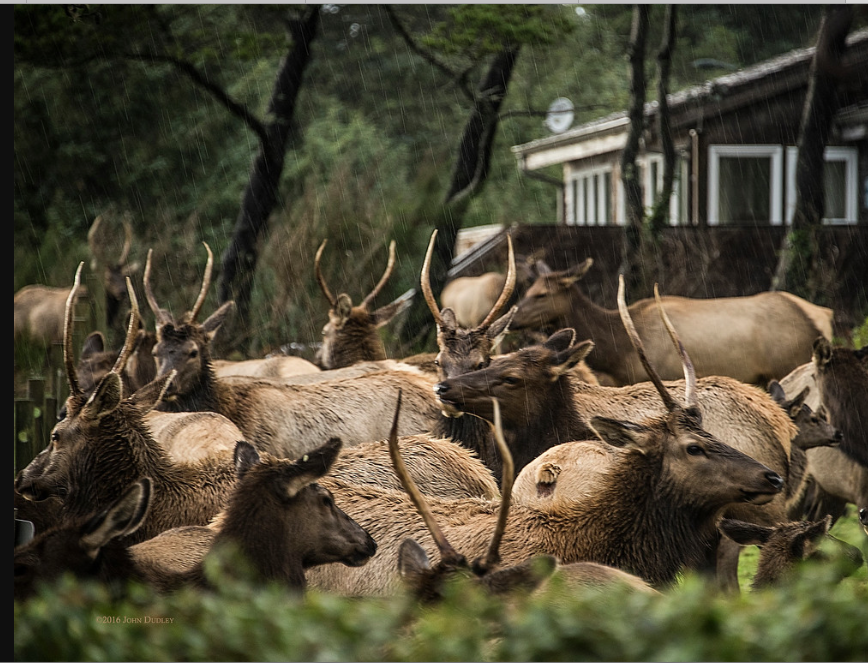 Elk in a Gearhart backyard. 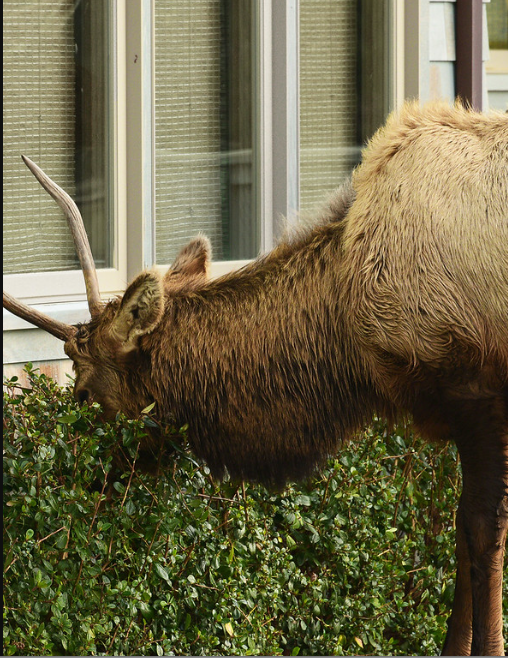 This elk dines on some Gearhart shrubbery.

Elk in a Gearhart backyard.

This elk dines on some Gearhart shrubbery.

In a few short years they’ve become a symbol of Gearhart.

“It just is unbelievable,” Gearhart’s Ellie Ludy told reporter Brenna Visser. Having an elk herd wander through town is a bonus Ludy didn’t expect when she moved to the coast about a year ago. “I knew there would be elk, but I didn’t know they would come into your yard!”

But for others, the elk have become more of a nuisance and even a threat. Golf course professionals, homeowners and landscapers have considered everything: gates, fences, trapping and transport, reintroducing natural predators — even birth control.

Now the city is chronicling elk-human encounters in an effort to quantify the extent of the problem, to provide safety for residents and limit damages to property owners. The comments are posted on the city’s blog site and offer a stark and seemingly endless series of dangerous incidents.

“As we tried to pack up and leave last Monday afternoon, we found ourselves surrounded by elk who clearly did not mind our looking but did not want us encroaching on their space,” a resident posted. “Five were on Ocean Avenue feet from the back of my jeep and 40 or more on our west lawn.”

At the city’s January City Council meeting, local resident and ham radio operator Dana Gandy told the city elk destroyed approximately $1,000 worth of emergency communications and antennas and equipment in his backyard. An antenna mast approximately 45 feet tall was snapped in half; cabling and guy wires were destroyed.

Forrest Goodling, groundskeeper at Gearhart Golf Links, reported $5,000 damage to a newly seeded putting green in a Dec. 22 blog post. Goodling and area golf course crews have been struggling with damage — and potential risk — for years.

In July, golf course officials staged decoy coyotes — models of the predators intended to deter the elk — something of a last-ditch move to find a peaceful resolution to this hoofed invasion.

“We’ve been working on getting the elk removed, the herd size reduced for years now,” golfer Russ Earl said, recounting meetings with four different levels of the Department of Fish and Wildlife.

Gearhart’s Gay Jacobsen told the city in a December blog post: “We were practically held captive for two days as a herd of 75 elk took over our street, backyard and front yard decimating vegetation, ruining turf and breaking our sprinkler heads. … They had no fear of us and were huge.”

Drivers and pedestrians alike find themselves surrounded by the herd, pets are threatened and their owners intimidated.

“I must leave the house with caution,” wrote South Ocean resident Susan Workman.

In a blog post, Ian Goldspink said he was “real close to being in the herd” as he drove down Pacific Way.

“They certainly are majestic and exciting, but they are a bit too fearless of us and too close,” wrote Bill Bennetts of South Ocean Avenue. “They are starting to make seagulls seem attractive.”

It’s easy to see the appeal of the elk, a rare creature in most places, recovered after near depletion. From 1905 in the Peninsula, no elk were legally hunted until 1933. Aware of the elk situation, President Theodore Roosevelt set aside 615,000 acres as Mount Olympus National Monument in 1909 for the expressed purpose of providing a reserve for Roosevelt elk. A bounty was placed on cougars, the natural predator of elk.

Today, Roosevelt elk proliferate without predators and in Gearhart are protected within the city limits from rifles or archers. They migrate near the estuary and on any given Sunday, depending on their grazing habits, out-of-towners can be seen parked along the roadway or by the high school for a glimpse.

“The elk are a pain, but the tourists love them,” wrote Gearhart’s John Green in a blog comment. “Maybe a little too much at times.”

Over the summer, the city received reports of aggressive elk — bulls can weigh 900 pounds and cows clear 800 pounds — along Pacific Way, G Street and beach trails. One report was of an elk threatening an unleashed dog and its owner. The dog was unharmed, but the owner and another person were understandably frightened, police said. Visitors were advised to keep dogs leashed during elk calving season.

Not only are people frightened, but elk are suffering in some cases. In November residents were distressed after seeing elk encumbered by a tomato cage and a volleyball net, enough so to contact the Department of Fish and Wildlife to find a remedy.

Photographer John Dudley, whose home on Little Beach overlooks the estuary, said answers will be complicated for no other reason than the fact that emotions run high on both sides of the issue. Anything proposed at the local level would likely face a long period of scrutiny by state and maybe even federal agencies.

“I have watched and photographed the herd for over 10 years and have seen them at least quadruple in numbers,” Dudley said. “I like elk and I like humans, but no one should believe that living together is not fraught with danger to both species.”

At the city’s first meeting of the year, councilors once again sought solutions.

“I remember a number of years ago it was, ‘Look at the elk who are visiting our city,’” City Attorney Peter Watts said. “Now the reports we are getting are very different, as well the number of elk and size of the herd.”

Mayor Matt Brown, who as a PGA professional at the Highlands Golf Course has first-hand experience with the issue, said the city will forward feedback to Fish and Wildlife as it comes in.

A letter addressed to Fish and Wildlife went out in the mail Jan. 10. “The city of Gearhart would like to request more information on how to best protect the citizens’ safety and what can be done so no one is injured or killed by these animals,” Brown wrote.

Matt Brown hopes it will build awareness of the conflicts public safety issues such as elk-caused traffic accidents, elk-to-human contact and elk-to-pet contact.

“We really haven’t had a way to document things,” Brown said. “Specific incidents haven’t been documented. Now they are.”