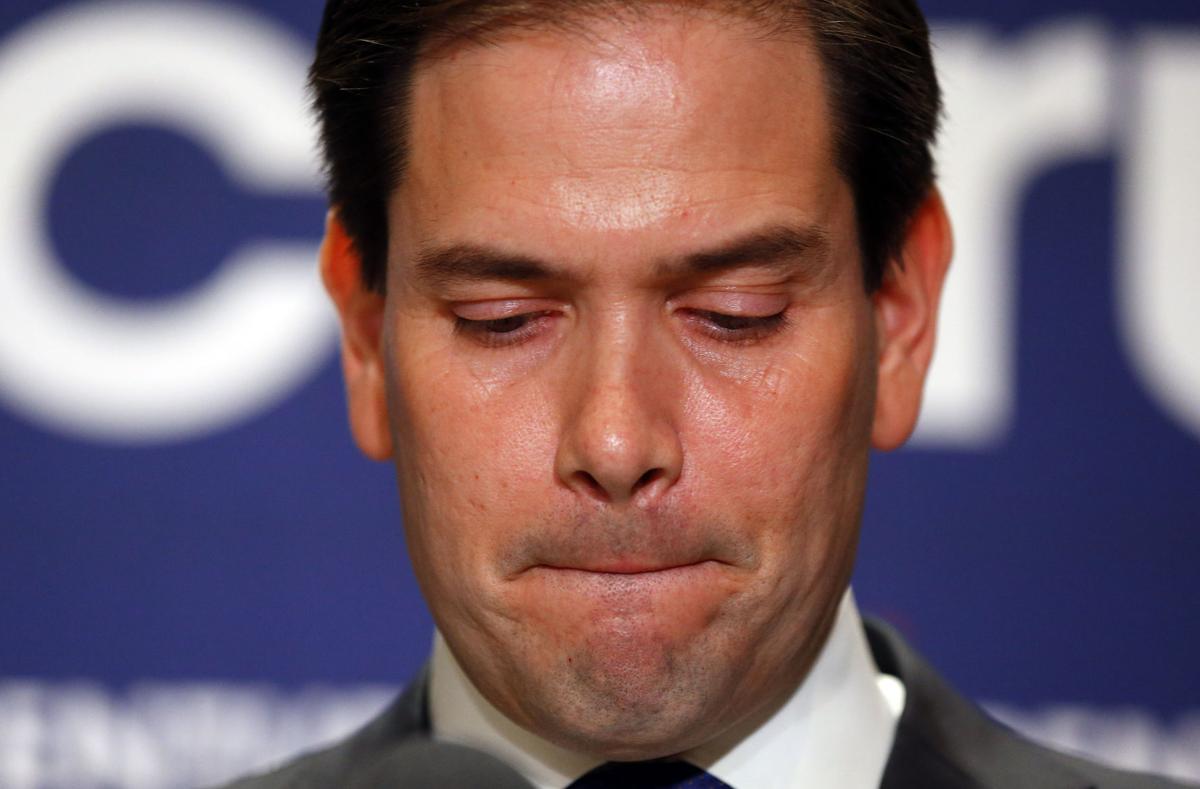 Republican presidential candidate Sen. Marco Rubio, R-Fla., speaks during a Republican primary night celebration rally at Florida International University in Miami, Fla., Tuesday. Rubio is ending his campaign for the Republican nomination for president after a humiliating loss in his home state of Florida. 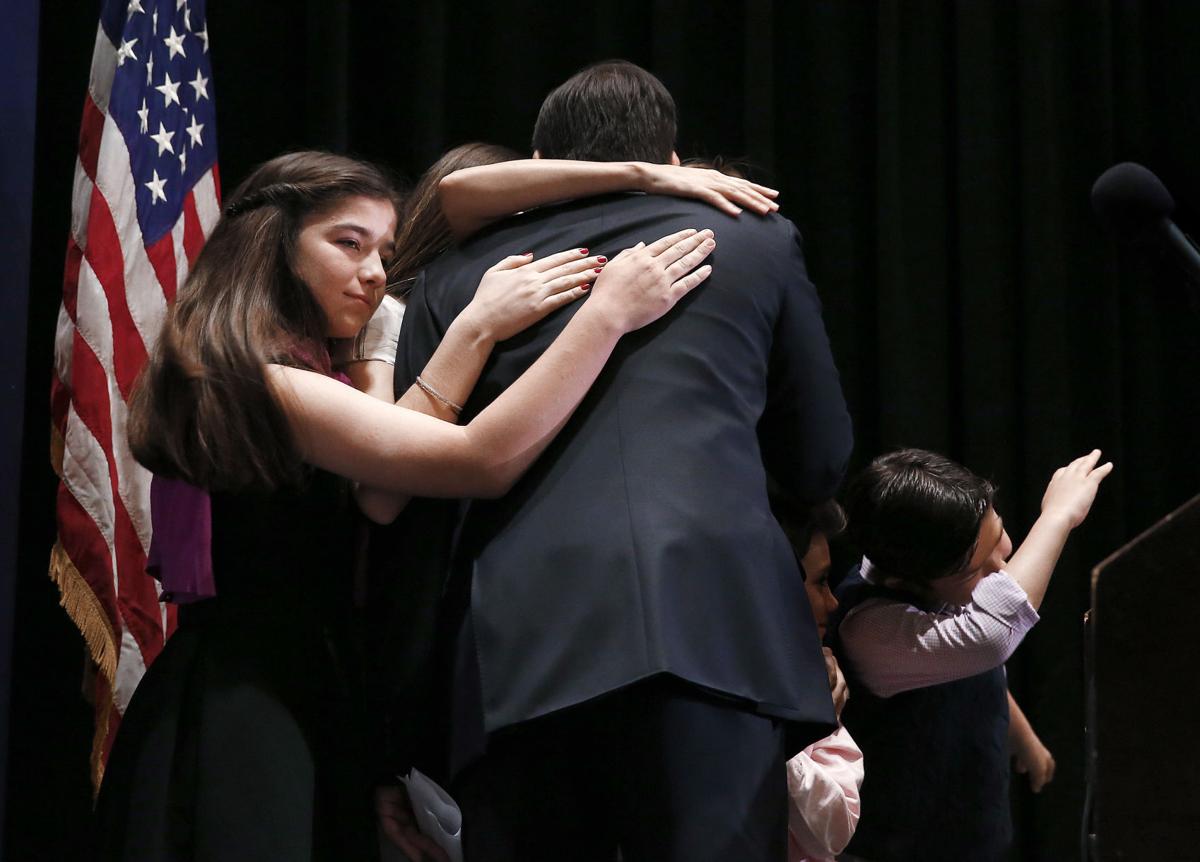 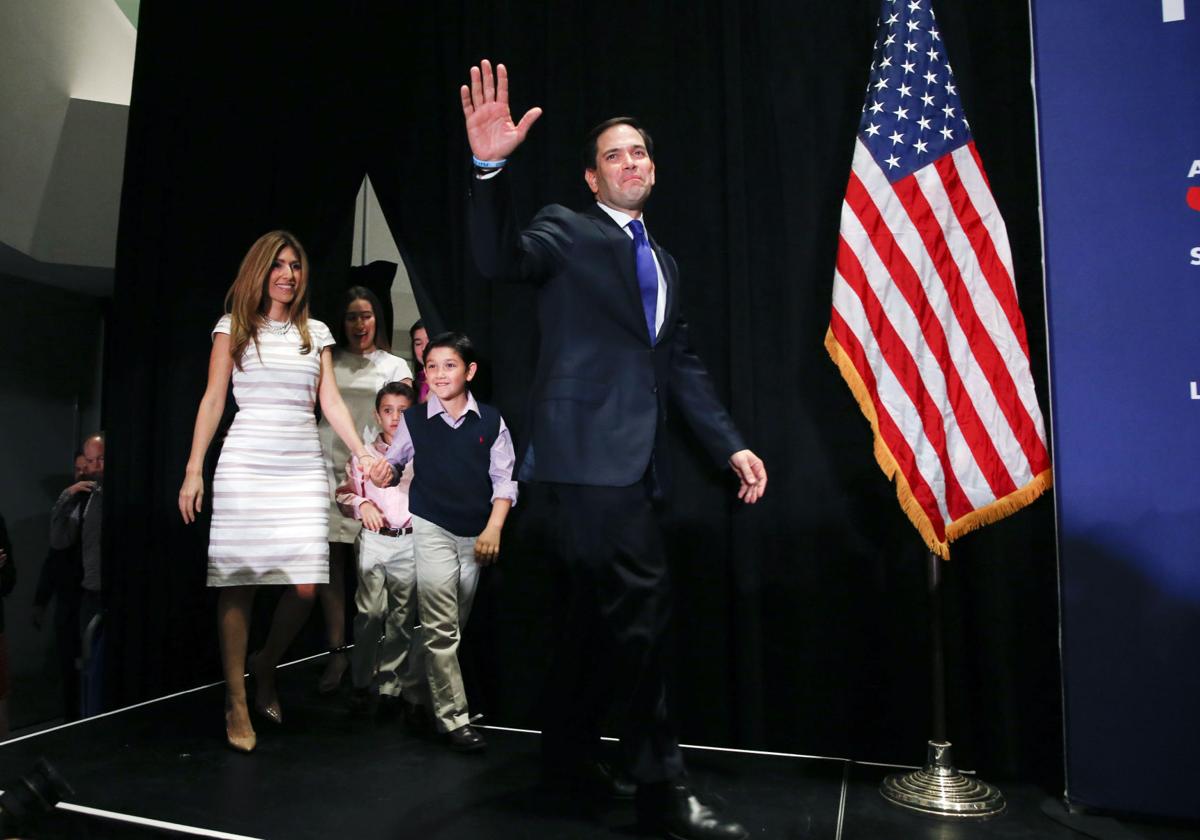 Republican presidential candidate Sen. Marco Rubio, R-Fla., waves during a Republican primary night rally at Florida International University in Miami, Fla., Tuesday. Rubio is ending his campaign for the Republican nomination for president after a humiliating loss in his home state of Florida.

Republican presidential candidate Sen. Marco Rubio, R-Fla., speaks during a Republican primary night celebration rally at Florida International University in Miami, Fla., Tuesday. Rubio is ending his campaign for the Republican nomination for president after a humiliating loss in his home state of Florida.

Republican presidential candidate Sen. Marco Rubio, R-Fla., waves during a Republican primary night rally at Florida International University in Miami, Fla., Tuesday. Rubio is ending his campaign for the Republican nomination for president after a humiliating loss in his home state of Florida.

Even in the last limping years of his deeply unpopular administration, George W. Bush was still popular with Republican voters.

After Barack Obama took office, Bush’s image popped up in anti-Obama iconography, with a cheeky “miss me yet?” attached.

And as his presidency receded, Bush’s favorable ratings floated upward, rising above Obama’s and Hillary Clinton’s as the 2016 campaign got underway.

These numbers were no doubt present in Jeb Bush’s consciousness when he made his fateful and destructive decision to run for president. But they were also clearly part of Marco Rubio’s read on the Republican Party, which ultimately led him to last night’s campaign-ending defeat: Even more than George W. Bush’s own brother, Rubio tried to make himself an heir to Bushism, and to build a bridge between the last Republican administration and the one that he aspired to lead.

Rubio’s defeat, like most in politics, had many causes: a weak ground game, a media strategy that was overwhelmed by Donald Trump’s cable-TV dominance, a persona and positioning that made him a second choice all over the map but a winner hardly anywhere, a youthful mien in a “hard man for hard times” election, and of course that one dreadful New Hampshire debate.

But in purely ideological terms, what primary voters were rejecting when they rejected him was the political synthesis of George W. Bush.

In domestic politics, that synthesis had four pillars: a sincere social conservatism rooted in a personal narrative of faith; a center-hugging “compassionate conservatism” on issues related to poverty and education; the pursuit of comprehensive immigration reform as a means to win Latinos for the GOP; and large across-the-board tax cuts to placate the party’s donors and supply-side wing.

In foreign policy, Bushism began with the promise of restraint but ultimately came to mean hawkishness shot through with Wilsonian idealism, a vision of a crusading America whose interests and values were perfectly aligned.

From his arrival in Washington, Rubio seemed intent on imitating this combination of ideas. He associated himself with neoconservative foreign policy proposals and personnel. He became the face of comprehensive immigration reform, take three. He wooed a rising generation of evangelical and Catholic activists. He filled out a domestic policy portfolio with “reform conservative” ideas on welfare reform, health care, higher education and family-friendly tax policy. And then to make sure nobody accused him of being some sort of redistributionist squish, he attached those ideas to a sweeping capital gains and corporate tax cut.

Politically it was by no means a crazy strategy. For all his blunders, George W. Bush is still the only Republican candidate for president to win the popular vote in the last 25 years, and the only figure to successfully unite and lead a fractious party. Parts of Bushism look more optimistic, inclusive and economically relevant than either the angrier Tea Party message that Rubio piggybacked on in his 2010 Senate campaign or the generic “Mr. Republican” messages that John McCain and Mitt Romney lost with in 2008 and 2012.

And with the Middle East in flames, Russia increasingly aggressive and the Islamic State camped out in Iraq and Syria, you can see why many conservative elites imagined that Americans — and Republican primary voters, especially — might want a more hawkish, even Bushian successor to Barack Obama.

But alas for Rubio, it turned out that Republicans didn’t want any of this.

They didn’t want comprehensive immigration reform, which shouldn’t have been surprising because they hadn’t wanted it when Bush was president, either; it was an idea that had hung around and hung around without ever finding a conservative constituency outside Washington.

They didn’t want an optimistic, next-generation version of social conservatism, preferring either Ted Cruz’s old-time religion or Donald Trump as the church’s heathen bodyguard in a post-Christian landscape.

They didn’t care about the size of Rubio’s tax cut, because all the candidates were promising a big tax cut, they were all equally implausible, and voters — even conservative voters — just aren’t as tax-obsessed as they were in the Reaganite glory days.

They did want, perhaps, a different domestic policy than the uncreative platform Romney had offered, one that promised less to the wealthy and more to the working class. But Rubio’s halfhearted reform conservatism was outbid and overwhelmed by Trump’s brassy promises to renegotiate trade deals, slap on tariffs, leave entitlements untouched and bring back the jobs of 1965.

And they did want a kind of hawkishness — but not a Wilsonian hawkishness, in service to an ambitious grand strategy to stabilize or remake the Middle East. No, they wanted a Jacksonian hawkishness, one that promised to rain destruction on our enemies without the mess of nation building.

These desires don’t add up to a new Republican synthesis, and the candidates who have catered to them more successfully haven’t devised one. Trump’s populist, illiberal Jacksonianism can’t unite the party the way Bush once did, and Cruz’s hard-edge social and economic conservatism probably can’t win the median voter the way Bushism did twice (well, once plus a close second).

But they do add up to the desire for a new synthesis, and an understanding that whatever the Republican Party needs now, it can’t just be what worked for Bush and Karl Rove until Iraq went sour and Wall Street melted down.

At times, Rubio’s biography, his youth and his eloquence seemed to make him the natural candidate for a party in search of What Comes Next. And in certain ways he was victimized by a conservative electorate that fears the future, that wants any “new” synthesis to simply recreate the glories of a vanished American past.

But he was also a victim of his own fateful look backward, his assumption that what worked for the last Republican president could be made to work again. It didn’t, it couldn’t, and it probably won’t be tried again: Whoever wins the nomination in 2016, George W. Bush has gone down to defeat.

Whoever wins the nomination in 2016, George W. Bush has gone down to defeat.