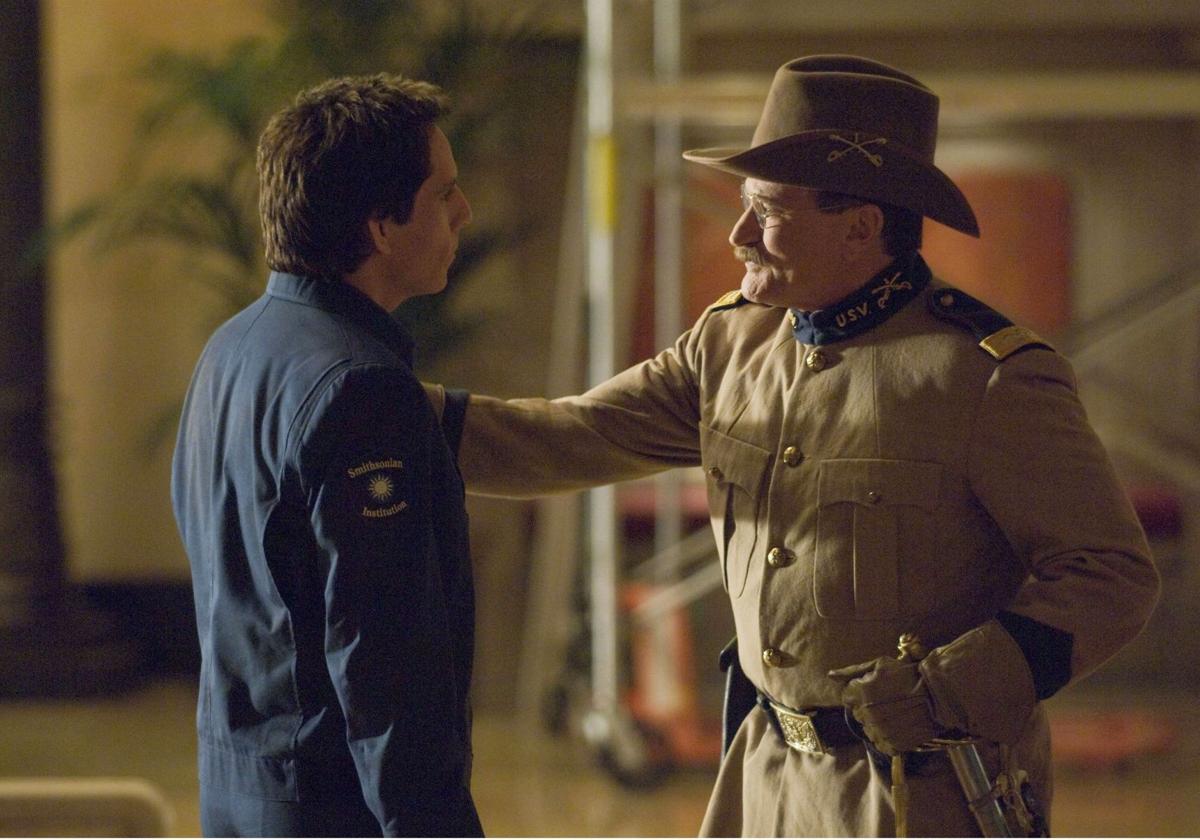 Teddy Roosevelt, portrayed by Robin Williams, right, and Larry Daley, portrayed by Ben Stiller are shown in a scene from, “Night at the Museum: Battle of the Smithsonian.” Williams, whose free-form comedy and adept impressions dazzled audiences for decades, died Monday. 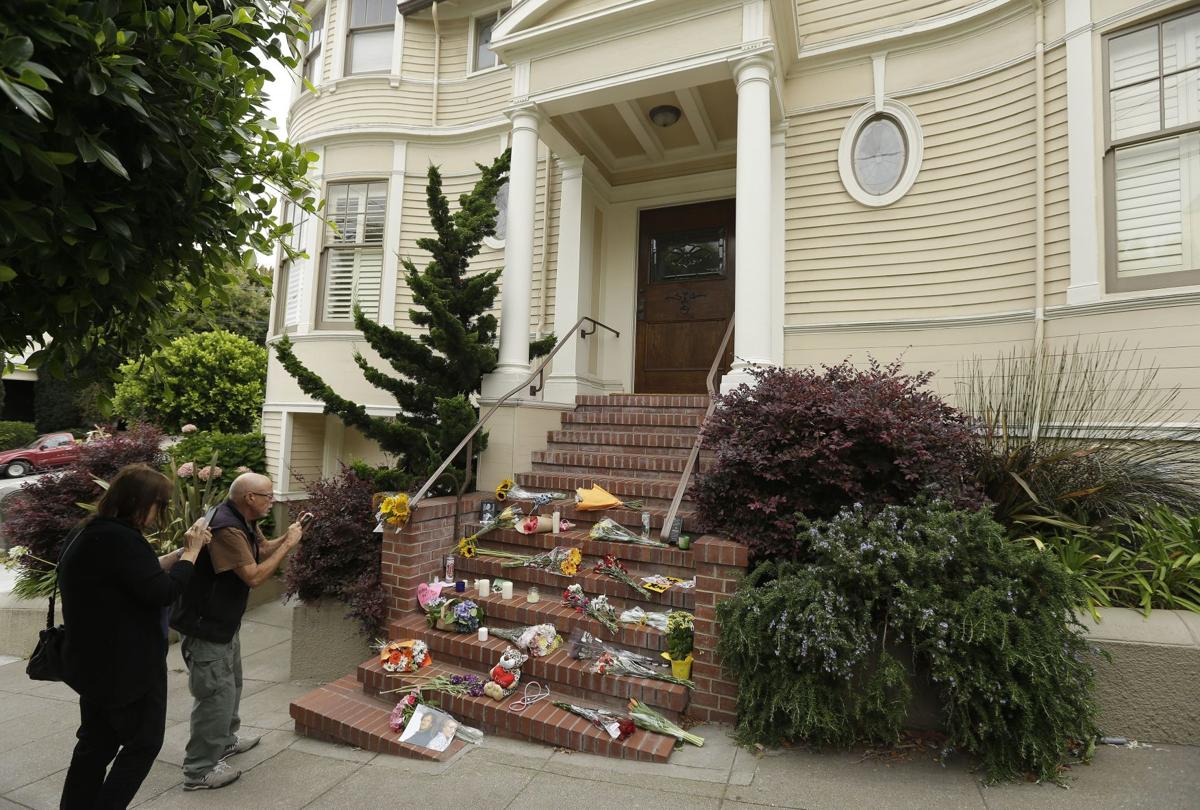 People photograph mementos that have been left on the steps of a residence in San Francisco. The location was used in the filming of the Robin Williams' film “Mrs. Doubtfire.” Sheriff's officials say Williams committed suicide by hanging himself at his home in Tiburon, outside San Francisco.

Teddy Roosevelt, portrayed by Robin Williams, right, and Larry Daley, portrayed by Ben Stiller are shown in a scene from, “Night at the Museum: Battle of the Smithsonian.” Williams, whose free-form comedy and adept impressions dazzled audiences for decades, died Monday.

People photograph mementos that have been left on the steps of a residence in San Francisco. The location was used in the filming of the Robin Williams' film “Mrs. Doubtfire.” Sheriff's officials say Williams committed suicide by hanging himself at his home in Tiburon, outside San Francisco.

WASHINGTON — I talked to Robin Williams once, about breasts.

In 1993, when he played a prim British nanny in “Mrs. Doubtfire,” I went to interview him at his Pacific Heights house.

“It’s great to be this blue-mouthed old lady hitting on somebody,” he said, in his character’s soft Scottish burr, “opening your blouse and saying, ‘What about these? Behold my dirty pillows, my fun bags. Come nurse at the fountain of bliss.’”

He was 42 then, wearing his Popeye outfit, a blue-striped T-shirt and black baggy jeans. Surrounded by kids, a rabbit and an iguana, we talked about everything from John Belushi to his father, a stern Ford Motor Co. executive.

I couldn’t wait to play the tape for Kelly, who doubled over in laughter.

The woman who always does her homework, the woman who resigned as president of Wellesley College’s Young Republicans over the Vietnam War, made that vote without even bothering to read the National Intelligence Estimate and its skimpy evidence.

It was obvious in real time that the Bush crew was arbitrarily switching countries, blaming 9/11 on Saddam so they’d get more vivid vengeance targets and a chance to shake up the Middle East chessboard, and that officials were shamelessly making up the threat as they went along.

For me to believe that Hillary would be a good president, I would need to feel that she had learned something from that deadly, globe-shattering vote – a calculated attempt to be tough and show that, as a Democratic woman, she was not afraid to use power.

With the diplomatic finesse of a wrecking ball, the former diplomat gave an interview to Jeffrey Goldberg, a hawk, of The Atlantic – a calculated attempt to be tough and show that, as a Democratic woman, she’s not afraid to use power.

Channeling her pal John McCain, she took a cheap shot at President Obama when his approval rating on foreign policy had dropped to 36 percent, calling him a wimp just as he was preparing for airstrikes against the Islamic State militant group.

As one Democrat noted, citing the callous Clintonian principle that unpopular things make foolish investments: “If Obama was at 63 instead of 36, she’d be happy to be Robin to his Batman.”

It’s not that she’s too old, despite nasty cracks on conservative websites like the Washington Free Beacon. It’s that she’s too old-think, thrusting herself forward as a hawk at a time when hawks – in the season of Elizabeth Warren and Rand Paul – aren’t so cool. Americans are sick of the idea that we should plunge in and plant our flag in the ground and work out the details later. It’s a complicated world, where you cross the border from Syria to Iraq and your allies are the enemy.

Hillary booed the president and said that, as secretary of state, she had wanted to do more to help the Syrian rebels. She said that Obama’s “failure” in Syria led to the rise of the Islamic State and sniped about Obama’s slogan: “Great nations need organizing principles, and ‘Don’t do stupid stuff’ is not an organizing principle.”

Saying you can’t live by slogans is rich, coming from someone whose husband’s presidency was built on “It’s the economy, stupid.”

Besides, a Times article by Tim Arango and Eric Schmitt demonstrated that “at every turn” the rise of the Islamic State’s self-styled caliph, Abu Bakr al-Baghdadi, had been shaped by the United States’ involvement in Iraq, putting the ball of blame back in Hillary’s court.

David Axelrod tartly tweeted: “Just to clarify: ‘Don’t do stupid stuff’ means stuff like occupying Iraq in the first place, which was a tragically bad decision.”

Hillary may know that she seemed unseemly. She called Obama to assert that she wasn’t attacking him, trying to avoid an awkward encounter when they both attend a Vernon Jordan party Wednesday night at the Martha’s Vineyard golf course where the president has been relaxing while the world explodes.

After buoying Hillary, Obama is learning the truth of another unofficial slogan in politics: “The Clintons will be there when they need you.”