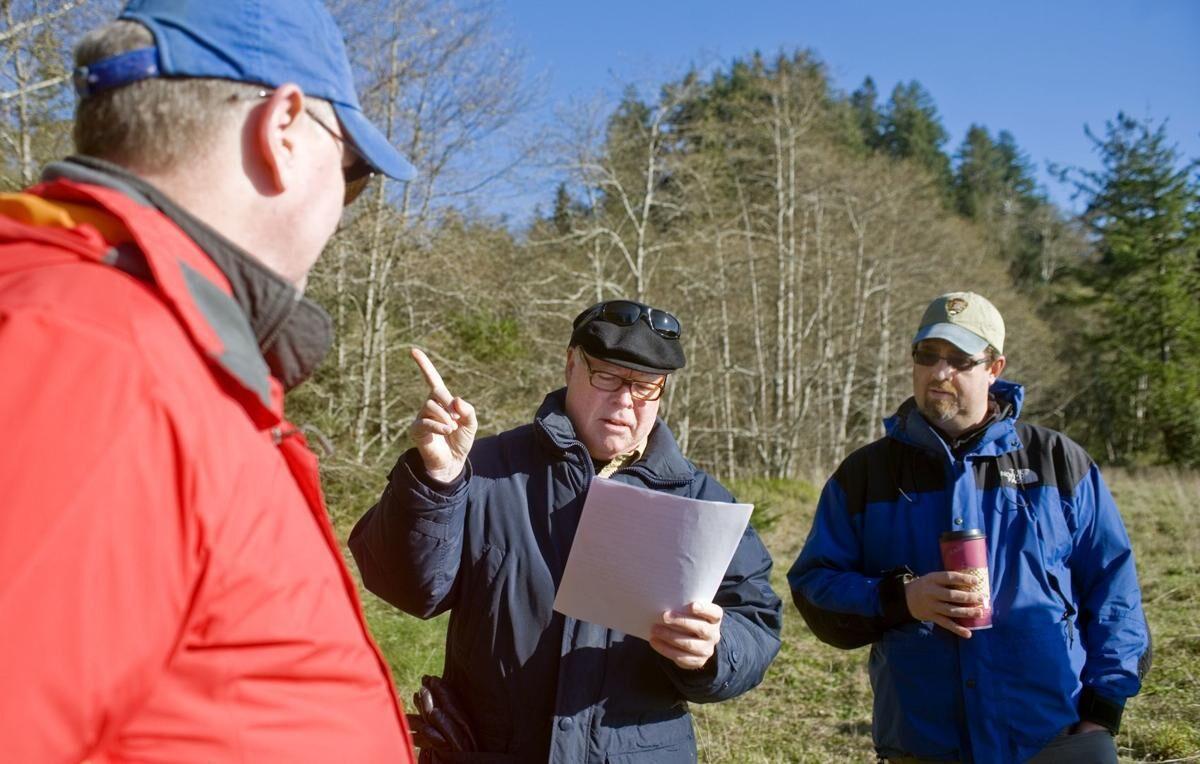 Although they’re taking a break this year because of the pandemic, a local group has established a tradition of marking the anniversary of Lewis and Clark’s arrival in the Columbia River estuary. In this photo from 2014, Steve Forrester, of The Astorian, points up toward Cliff Point while reading aloud from the journal of Capt. William Clark to Matt Winters, of the Chinook Observer, left, and Scott Tucker, then-superintendent of Lewis and Clark National Historical Park. 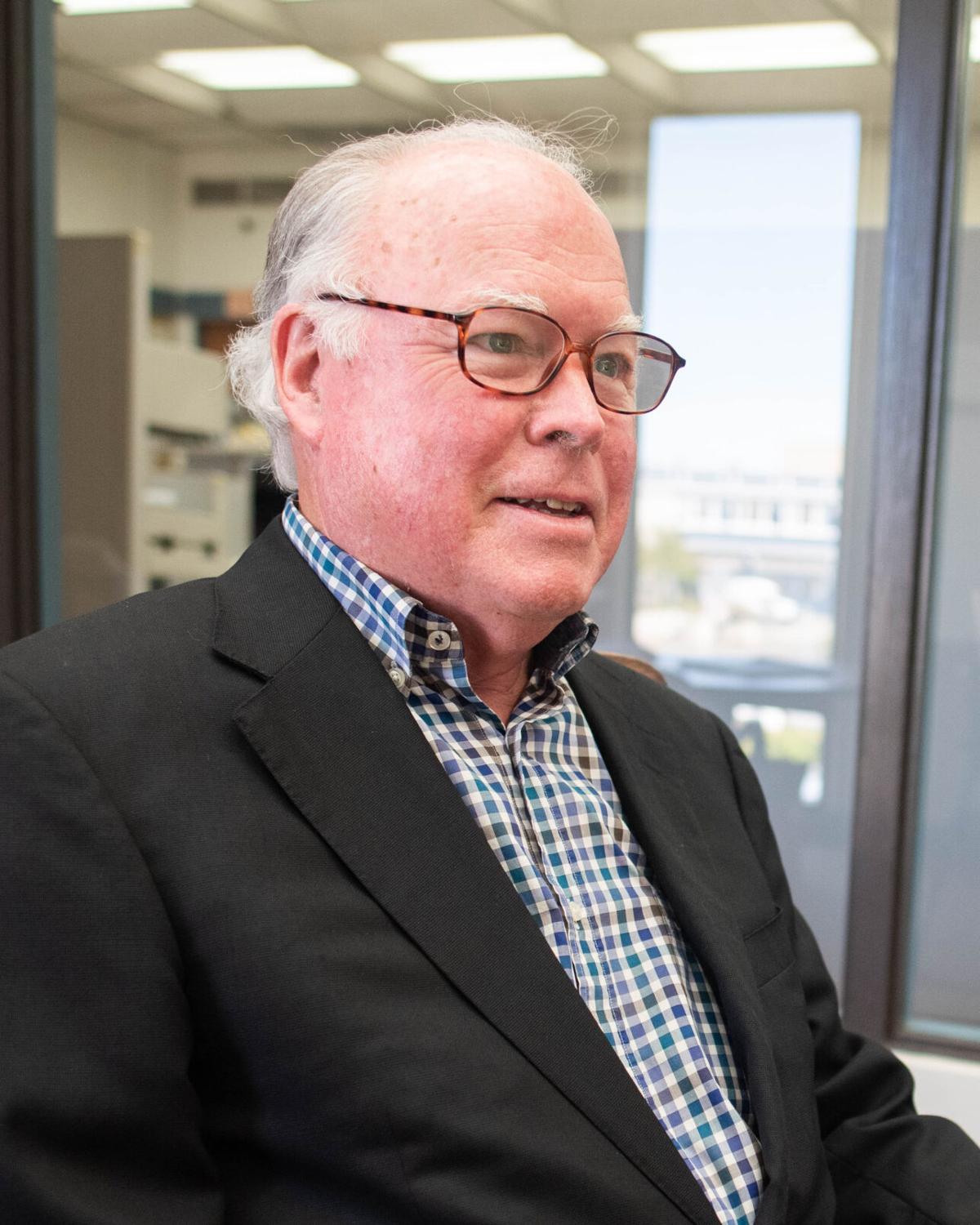 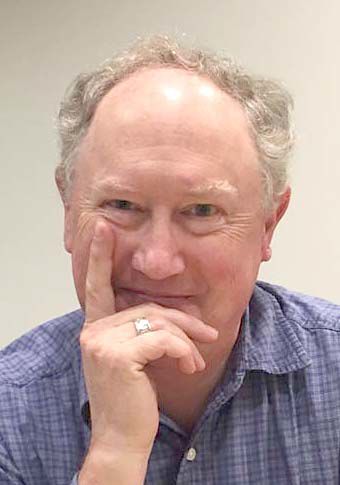 One of America’s great adventures attained its goal this month when Lewis and Clark’s canoes came down the Columbia River, arriving at a fateful location on what is now Washington’s southern boundary.

From Nov. 10 to Nov. 15, 1805, the explorers struggled to overcome one of the expedition’s most perilous obstacles, a river headland they named Point Distress and which we know as Point Ellice, the Astoria Bridge’s northern terminus.

History has touched our region many times, but never with such meaning as the anniversary we all should recall each November. The explorers’ four months at the mouth of the Columbia River were largely ignored until about 16 years ago.

On the advent of the bicentennial of President Thomas Jefferson’s commissioning this transcontinental research trek, local historian Rex Ziak set out to do justice to the expedition’s time at the mouth. Ziak’s work — published in The Astorian and the Chinook Observer and in his book “In Full View” — caught the attention of Congressmen Norm Dicks and Brian Baird, who led a drive to add Washington sites to what became the Lewis and Clark National Historical Park.

The rest of us nonhistorians learned about Dismal Nitch — a location on the Washington shore, east of the Astoria Bridge. That was where a terrifying storm system threatened the explorers and trapped them on an exposed riverbank for endless sodden days. Nearly out of food and with their clothing in shreds, they were helped by Chinook traders who navigated the roiling river with ease, delivering a cargo of salmon for sale and some degree of hope.

Reflecting on how we may identify with the explorers, Jon Burpee, the park’s superintendent, writes: “Of all the experiences that you can find here at the far end of the Lewis and Clark trail, I think that standing on the north shore of the Columbia, in a driving rain, helps you understand the challenges faced by the Corps of Discovery in November 1805.

“That south wind bites deep into well-dressed modern people. For the Corps, in clothing that was quickly rotting away in the extreme weather, this was a trying time. Standing along that shore, it is hard to imagine a more dismal time in the Corps’ story. They were cold, wet and miserable and not at all equipped to deal with the challenges.”

For some five years, a group of us went to the suspected site of Dismal Nitch at this time. Led by local historian Jim Sayce, we read from the Lewis and Clark journals. In truth, there are two suspected Dismal Nitch sites — one identified by Ziak and another identified by Sayce. Each avidly defends his own theory, but in truth Pacific County’s entire Columbia shoreline is a zone of national importance. The precise location of any one site pales in comparison to the enormous drama of the expedition’s struggles and eventual triumph.

The Corps of Discovery’s adventures on the north shore of the Columbia were far more dramatic than what happened at Fort Clatsop. Burpee reflects: “What I find most interesting in this part of the journals is that William Clark’s words point to the fact that they truly were in a different land. On Nov. 11, 1805 after two unsuccessful attempts to continue in their canoes through the rough swells on the river, he was amazed at the ability of five Indians who very successfully navigated the river in a small canoe. He wrote, ‘Those Indians are Certainly the best Canoe navigaters I ever Saw.’”

It remains a subject of ongoing shame in our region — and deserves to be one for the nation — that the Chinook and Clatsop people continue to lack formal federal recognition as a living tribe or tribes. They did not move on or die out in the aftermath of white colonization, but endure today as many families scattered throughout the lower Columbia communities and the wider world. Lewis and Clark simply could not have succeeded without Indian help.

Dayton Duncan, who was Ken Burns’ co-author of his Lewis and Clark production, captured a raw deal when he spoke at Fort Clatsop during the bicentennial of the Corps’ arrival here. Duncan noted that when Lewis and Clark’s men and Sacagawea emerged from the Rockies starving, it was the Nez Perce who saved them with nourishment. “And how did we thank them?” asked Duncan.

The Chinook might note that at least the Nez Perce have a 770,000-acre reservation of their own and all the other advantages that come with official federal status.

Writing in the New Yorker earlier this month, Philip Deloria noted a grim comparison. Reviewing a new book on the Shawnee leader Tecumseh and his brother, Deloria made a point about what many have called America’s “original sin of slavery.” In essence, Deloria says that the genocide of Native Americans ranks in that same category.

In this time of Black Lives Matter, our continent’s original inhabitants are right in asserting that they, too, richly deserve long overdue acknowledgment of full citizenship and human rights in a nation that aspires to offer equal protection to all.

Broader awareness of the Lewis and Clark story ebbs and flows in our national consciousness. But it is a saga containing an enduring array of object lessons about where America was then and is now. We can usefully remember the ways in which Native American people welcomed a party of bedraggled foreigners.

Courage and basic human decency are always worthy of celebration.

Steve Forrester, the former editor and publisher of The Astorian, is the president and CEO of EO Media Group. Matt Winters is editor of the Chinook Observer.