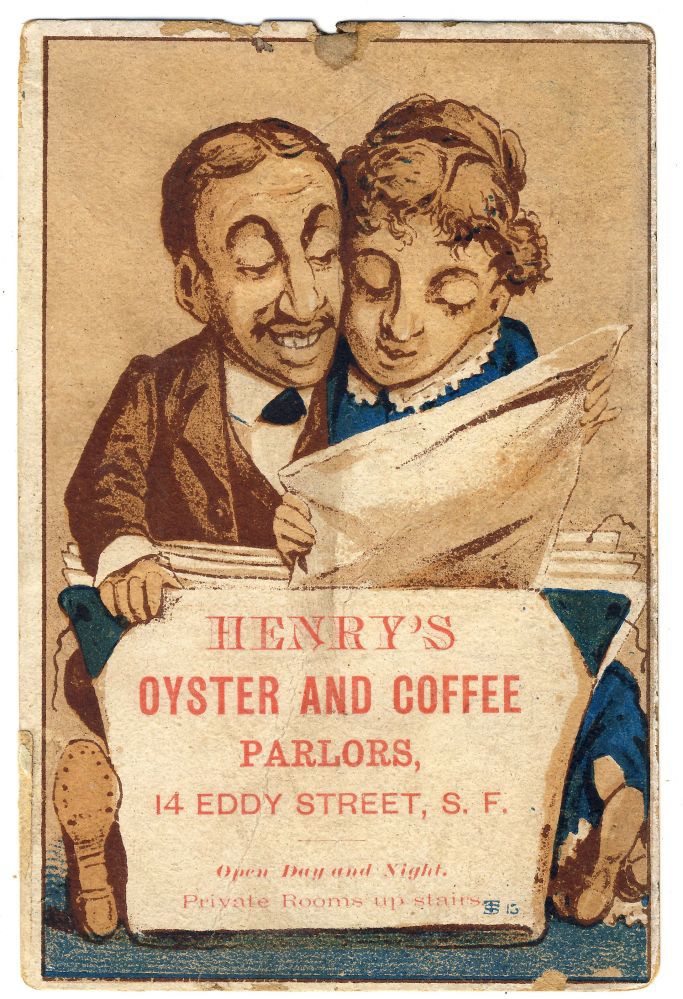 <p>MATT WINTERS COLLECTION "Open day and night" and advertising ÒPrivate rooms up stairs,Ó HenryÕs Oyster and Coffee Parlors in San FranciscoÕs Tenderloin was obviously marketing something more than just seafood and a caffeine fix. A legendary example of the West CoastÕs love-hate relationship with the sex industry, the Tenderloin and other red-light districts like AstoriaÕs Swilltown were simultaneously sordid and vital. Such locales eventually merged into mainstream life. American poet Robert FrostÕs probable birthplace is the very same as HenryÕs ÒParlors.Ó</p> 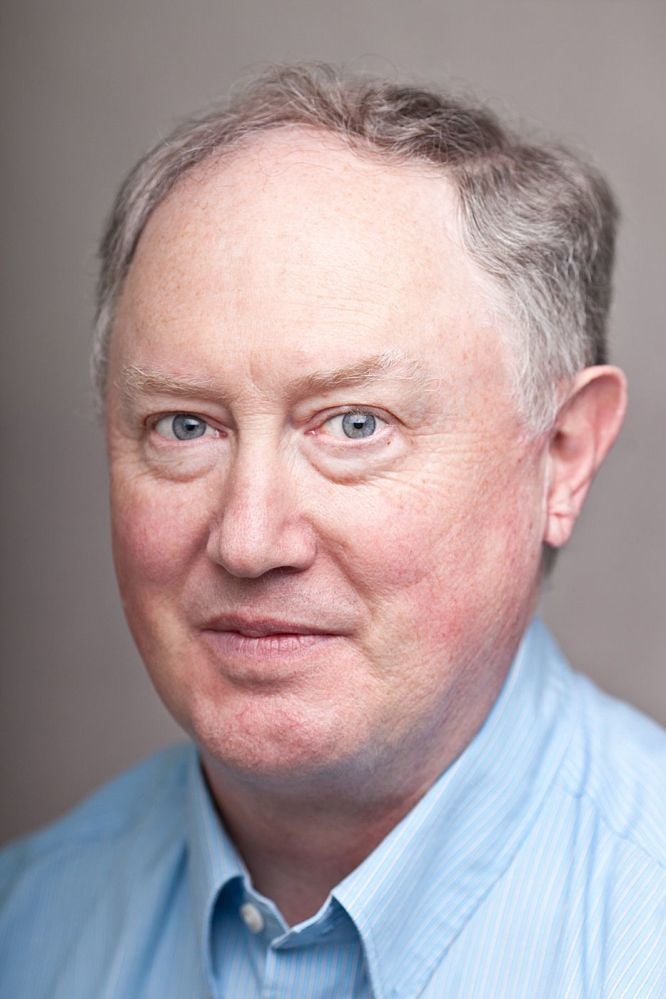 <p>MATT WINTERS COLLECTION "Open day and night" and advertising ÒPrivate rooms up stairs,Ó HenryÕs Oyster and Coffee Parlors in San FranciscoÕs Tenderloin was obviously marketing something more than just seafood and a caffeine fix. A legendary example of the West CoastÕs love-hate relationship with the sex industry, the Tenderloin and other red-light districts like AstoriaÕs Swilltown were simultaneously sordid and vital. Such locales eventually merged into mainstream life. American poet Robert FrostÕs probable birthplace is the very same as HenryÕs ÒParlors.Ó</p>

When my Grandma Lillie Winters was a little girl there at the turn of the last century, Seattle was an open town. At the time, this didnt necessarily mean open to suggestions or open-minded. It emphatically was open for business  of a person-to-person entrepreneurial nature.

Some of this business took the form of $10 monthly payments to corrupt Chief of Police Charles Wappenstein from each of the 500 or so prostitutes in town, part of a pervasive system of graft and vice in an Emerald City tinted green by illicit cash. In a town where Mayor Hiram C. Gill and leading newspaper publisher Alden J. Blethen were ardent supporters of anything-goes capitalism, its no wonder the Klondike Gold Rush perpetuated a frontier boomtown mentality when it came to prostitution.

Seattle was open to rough saloons, brothels and gambling from nearly its earliest days, with the vice industry ostensibly confined to the area south of Yesler Way  the original Skid Row dividing downtown from the port district. Ten years after settlement began, one of Seattles first purpose-built brothels was started near Yesler in 1861 by John Pinnell of San Francisco, who called his establishment Illahee, Chinook Jargon for home place.

Prostitution reached its high-water mark in the city about a century ago with construction of the Worlds Largest Bordello, a 500-crib corporate-scale structure in the Beacon Hill area  far south of the working-class residential area where my family lived above Lake Washington. Leave it to Seattle to over-commercialize even flesh-peddling to a Boeing or Starbucks-like level ...

But the good people of Seattle were exhausted with such overt official criminality. Particularly after Washingtons sensible women got the right to vote in 1910, the industry was driven underground. The super-brothels story ended in 1951 when a B-50 Superfortress bomber crashed into it, killing 11. It had since been converted into cheap apartments.

Seattle was far from alone in the American West in turning a blind eye toward prostitution. A fascinating book on the subject, Hells Belles, by Clark Secrest, mines voluminous notebooks kept by early police Detective Sam Howe of Denver. Containing unique personal and official details about front-line sex workers, Howes records bring to life the sorry circumstances that led women into the business. They are largely the same as today: Alcoholism, drug addiction, lack of any other economic opportunities, physical and emotional abuse by the men in their lives.

There also clearly were elements of choice in many of these career decisions, while the industry as a whole was favorably regarded by civic officials as economic development and a tourist attraction.

The ongoing permissive attitude exhibited by Denvers police and politicians toward prostitution confirmed that, indeed, commercial sex was good for both the city and legitimate business, Secrest writes regarding the late-1870s. Social historian Ruth Rosen goes into more detail: Although prostitutes were prevailingly characterized as outcasts with no place in society, in actuality they held an important place and served vital social functions. Economically, prostitution was a source of income to the police, to procurers, madams, doctors, politicians, and liquor interests.

But in that pre-penicillin area, a Denver physician estimated that Probably every third man who reaches the age of 25 has acquired in these places constitutional syphilis, which he then transmitted to his spouse. Health risks were even worse for prostitutes themselves, who all too often led existences of operatic-like tragedy.

Believing herself deserted after her husband and another woman disappeared from their Oregon-bound wagon train, one ordinary young housewife hiked to the city and abandoned herself to the sex trade. Thoroughly debauched months later, she discovered her husband hadnt left her  his skeletal remains were found near the wagon trail, where he had been murdered by bandits or Indians. She brought her life to a swift conclusion.

Portland and Astoria were on the leading edge of the sex trade in Oregon, both in pioneer times and during militarization associated with the world wars. In her 2006 book Oregon Disasters, Rachel Dresbeck writes, Astorias brothel district was called Swilltown, and it was alluring and spicy as anything in the Old West, since drinking, gambling, and prostitution were well tolerated by the city fathers as long as liquor licenses for the saloons brought in plenty of revenue. Swilltown, predictably, was located near the working waterfront in the lower part of town, apparently centered on Bond Street. Not for nothing was Astoria called by the Oregonian the wickedest place on earth. Takes one to know one, Portland.

Brothels were still an issue in my home county in Wyoming in the 1960s, where the Blue Goose carried on a thriving business under cover of a bus-stop cafe. Sheriff Peewee McDougall told our young crusading County Attorney Gerry Spence, They aint hurtin nothin ... kind of a tradition in the county. The town mayor told him, That house has been there a hunnert years. Why, its just like Mount Rushmore or somethin. And its the only industry Shoshoni has. Spence closed it down anyway, but somehow managed to get re-elected. Knowing him later in life, I doubt he would have chosen to get on a high horse about a business that continues still, despite best intentions.

A large part of prostitutions sordidness springs from mainstream societys desire to pretend it doesnt exist, consigning its workers to hidden lives of exploitation and criminality. It is tempting to wonder whether the Pacific Northwest shouldnt start remodeling our laws based upon Western Europes liberality on this issue, as we have with regard to other social matters. Grandma would be horrified to read me saying such a thing.

But as a wise U.S. Supreme Court justice once said, Sunshine is the best disinfectant.

Matt Winters is editor of the Chinook Observer and Coast River Business Journal.