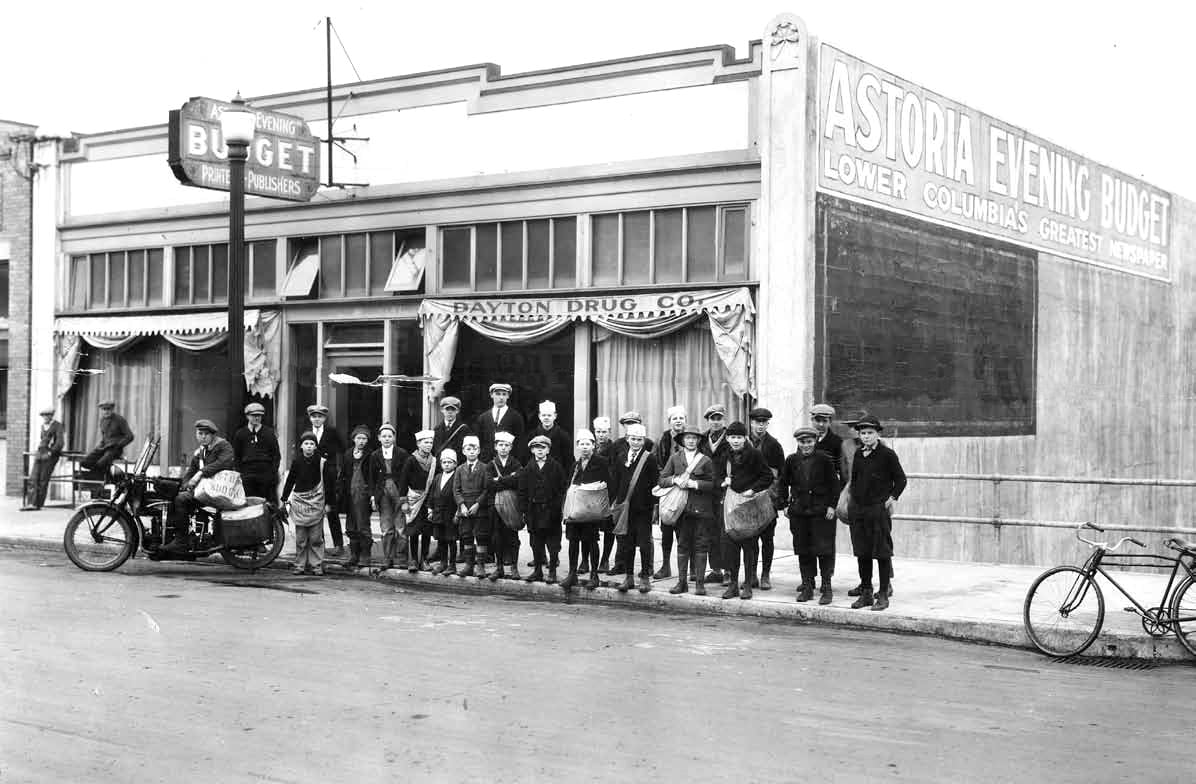 'Newsies' or paper boys for the Astoria Evening Budget. In 1930 the two leading newspapers in Astoria merged. The paper was renamed the Evening Astorian-Budget.

On the morning of Tuesday, July 1, 1873, a crowd milled at the corner of 10th and Commercial streets until Tri-Weekly Astorian Publisher DeWitt Clinton Ireland threw open his office doors and started selling papers.

The book "The Astorian" by Roger Tetlow reports that the city's first newspaper since 1866 sold out by noon that day — and Ireland said he wished he had printed more than 500 copies.

Business? You could say it was booming.

That four-page issue of the Tri-Weekly Astorian established a tradition that celebrates its 129th "birthday" July 1.

The news of the day was presented differently in 1873. Headlines, when they were used, were in small type and confined to one column, as were the stories. Small news briefs, sometimes no more than a sentence long, were front-page news and had to share space with classified advertising.

These excerpts are taken from the pages of the first issue:

• "Capt. George Flavel, who has been to California overseeing work on the barkentine Jane A. Falkinburg for a month past, is expected home to-day."

• "OUT OF SORTS – For the want of certain letters in the alphabet which the type founders neglected to send with the bulk of the type ordered, much that we wished to say to-day in the first issue of the ASTORIAN is necessarily omitted."

• A yearly subscription to the four-page paper, published on Tuesdays, Thursdays and Saturdays, cost only $5. Ads cost $1.50 per square per month.

With no education beyond age 12, Ireland learned the newspaper trade as an apprentice in South Bend, Ind. At 19, he founded his first paper in Mishawaka, Ind.

The daily glory lasted just over a month. Faced with low profits, Ireland was forced to cut publication to weekly status June 19, 1876.

To raise financial stability, the company branched out, printing salmon canning labels. In another year — on June 2, 1877 — the paper went daily again.

In 1881, Ireland sold the paper to John F. Halloran and Pitman W. Parker. The paper would change hands several times until 1930, when it merged with the Astoria Evening Budget, a separate paper founded in 1893 by Oscar W. Dunbar and John Gratke.

In more than 140 years, the Astorian — be it Morning, Evening, Budget, Tri-Weekly or Daily — has changed. News used to come to the remote city of Astoria by horse and buggy; now, computers and satellite links transmit news from around the world. Gone forever are the days of hand-engraved and hand-set type and pictures; our journalists use computers and smartphones to write and edit local stories, compose headlines and design pages.

However, some things never change. The names and places in the articles and advertisements from that July 1, 1873 issue are familiar. Gearhart, Van Dusen, and Flavel can be found in the Astorian today.

The Astorian has been under the leadership of the Aldrich-Forrester family for nine decades. In 1968, Michael Forrester became editor; three years later he was named editor-publisher. In 1973, when the Astorian-Budget Publishing Company merged with the East Oregonian Publishing Company (now EO Media Group), Michael Forrester became editor of the East Oregonian in Pendleton and his father, J.W. Forrester, who had been at Pendleton, was appointed editor of The Daily Astorian.

In 1988, J.W. Forrester retired and his son, Steve Forrester, assumed the post.

Steve Forrester added the publisher role to that of editor in 2000.

Managing editor Derrick DePledge was promoted to editor in August 2019.

1922 Astoria fire destroyed both the Morning Astorian and Evening Budget buildings. Astorian resumed printing three days later at The Toveri (Finnish) newspaper in town. Budget was printed for a while by the Seaside Signal.

1960 Name changed from Astorian-Budget to The Daily Astorian.

1970 Paper moved into new building at 10th and Exchange, and an offset web press was installed.

2010 Goss Community press is retired and replaced with a newer model with expanded page and color capacity.

2012 Publishes first edition of Our Coast magazine and launches DiscoverOurCoast.com

2019  The Daily Astorian again becomes the Astorian, publishing Tuesday, Thursday and Saturday.  Derrick DePledge promoted to editor of the Astorian.