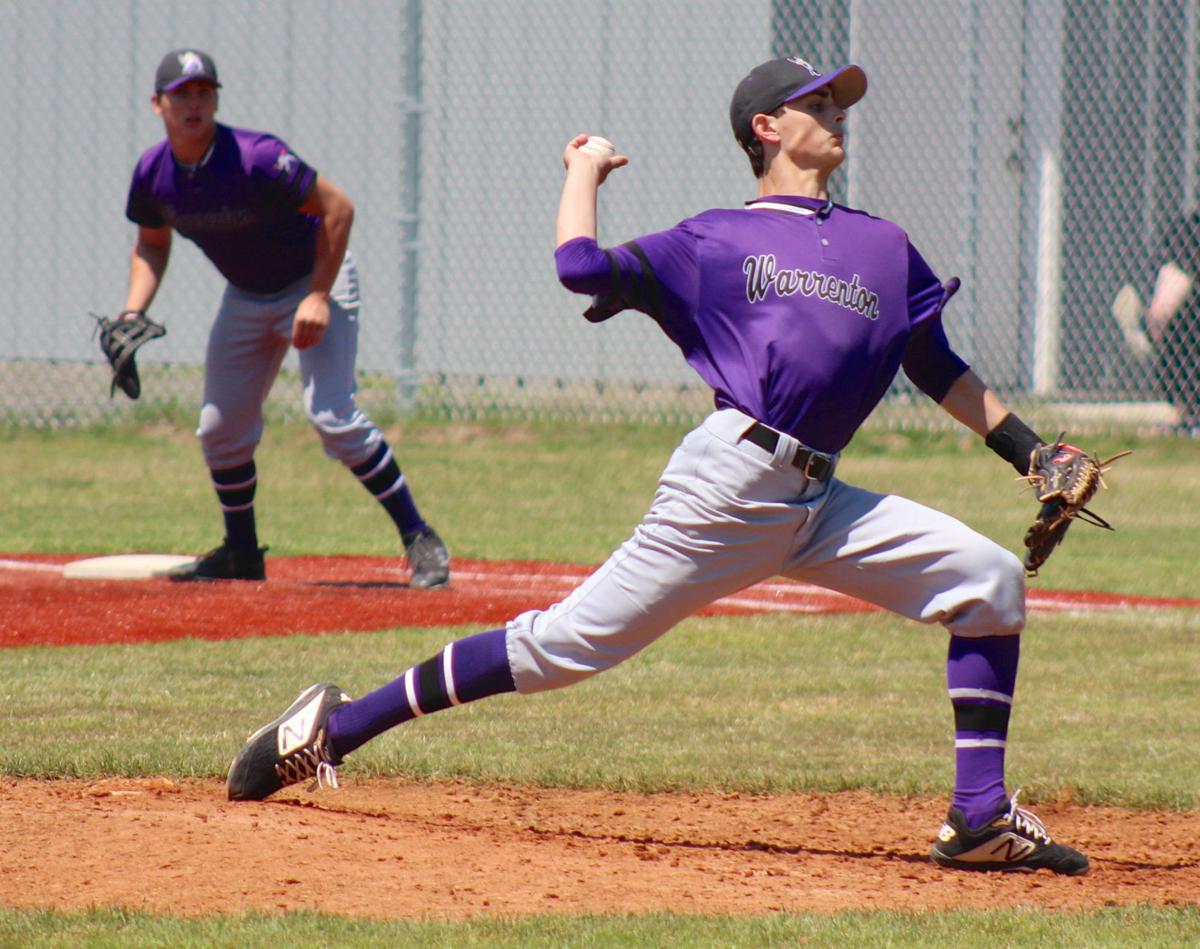 Warrenton pitcher Austin Little struck out five and kept Churchill scoreless over the final six innings of the Warriors’ victory in Game 1. 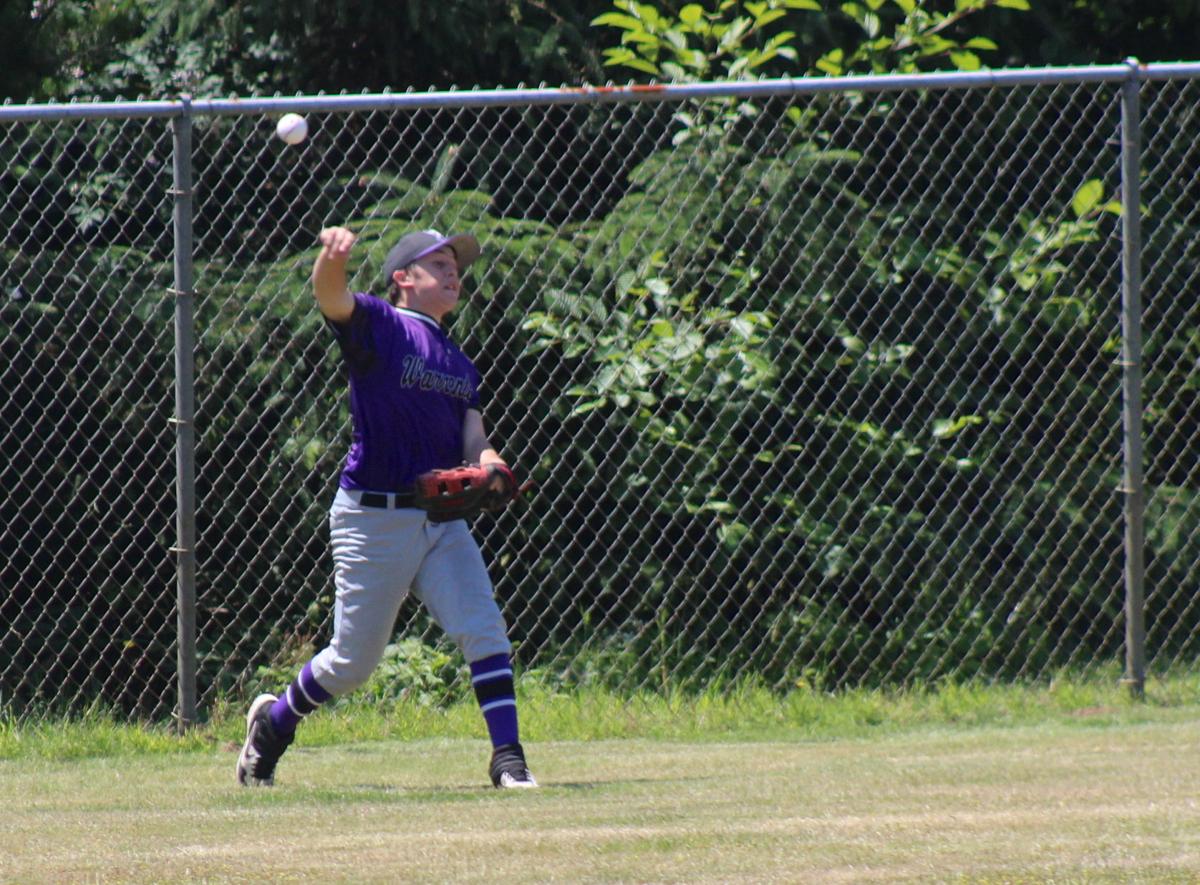 Warrenton outfielder Ryan Hoagland makes a throw back to the infield following a Churchill base hit.

Warrenton pitcher Austin Little struck out five and kept Churchill scoreless over the final six innings of the Warriors’ victory in Game 1.

Warrenton outfielder Ryan Hoagland makes a throw back to the infield following a Churchill base hit.

WARRENTON — The Warrenton summer baseball team improved its record to 9-2-1 over the weekend, with four more wins as part of the Warrenton Challenge at Huddleston Field.

The Warriors highlighted the three-day tourney with a doubleheader split Sunday with Class 5A Churchill, with a 5-1 victory followed by a 4-2 loss to the Lancers, a 5A quarterfinalist in last year’s state playoffs.

Warrenton only had three hits, but with Little’s pitching and a solid defense, that’s all the Warriors needed.

A near-meltdown by the Lancers in the first inning didn’t hurt.

The Warriors scored five runs on four walks, two hit batters, a pair of errors and a pickoff attempt that helped Warrenton score a run.

Both teams were scoreless over the final six innings.

Warrenton grabbed a 1-0 lead in Game 2, as Gabe Breitmeyer sprinted home on a ground ball by Ryan Hoagland.

But that would be the only Warrior run until the sixth inning, while Churchill scored twice in the second inning, and a two-run homer by Dylan Carson made it 4-1 in the third.

A big-time quarterback prospect for the Lancers, Carson also had a double and hit the ball hard in every at-bat.

After a scoreless fourth and fifth, the Warriors loaded the bases with no outs in the bottom of the sixth.

Hoagland’s single to shallow left scored Jake Morrow, but Warrenton’s potentially big inning came to a quick end. One baserunner was thrown out at the plate on a passed ball, and starting pitcher Bryson Estrella struck out the next two batters to end the inning.

The Warriors brought the tying and game-winning run to the plate in the bottom of the seventh, but Churchill reliever Cho Tofte struck out the side to end the game.

“Looking at the big picture, we went 2-1 against two very good 5A programs,” said Warrenton coach Lennie Wolfe. “They may be young and they may have lost some seniors, but for a tiny 3A school like we are, I’m very pleased with where we’re at.

“Yes, we’re disappointed because we didn’t get the sweep, but when we’re disappointed at losing to a 5A state playoff team, we have to keep it in perspective about where the program’s at,” he said. “We’re young too, but that only means we’ve got lots of room for improvement before next March.”

Warrenton did not play Saturday, after opening the tournament with two wins Friday — a 2-1 decision over Neah-Kah-Nie and a 4-1 victory over Crescent Valley.

Warrenton had just three hits in the opener against the Pirates, in which the Warriors trailed 1-1 after five innings.

The Warriors tied the game in the bottom of the sixth, then won it in the seventh on a walk-off wild pitch.

Devin Jackson pitched a complete-game, three-hitter against Crescent Valley, striking out eight. He needed just 76 pitches to complete the game.

Offensively, the Warriors had just four hits. Warrenton’s Austin Little had a combined four hits in the two Friday games.