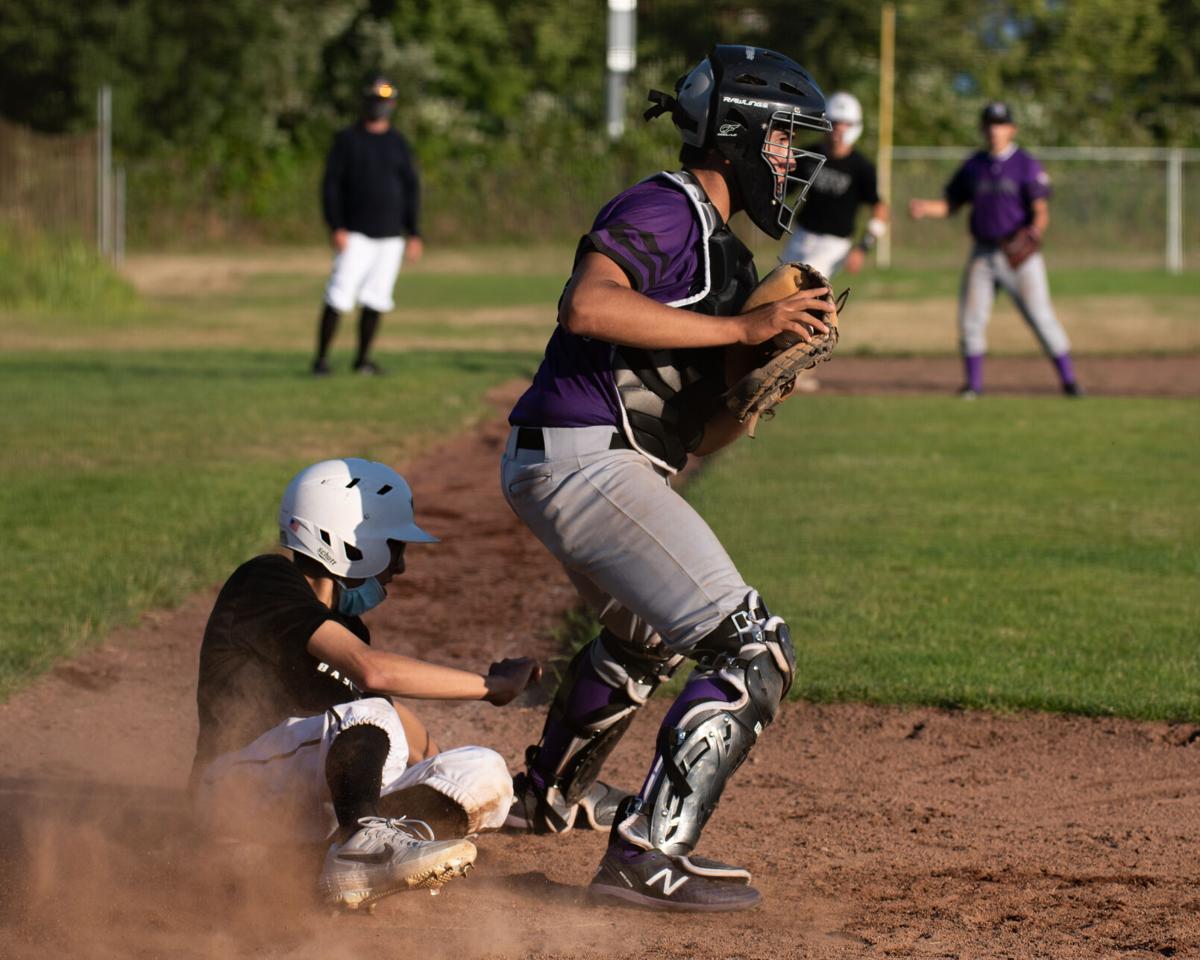 Warrenton’s catcher Duane Falls looks for another play after getting an out at home plate. 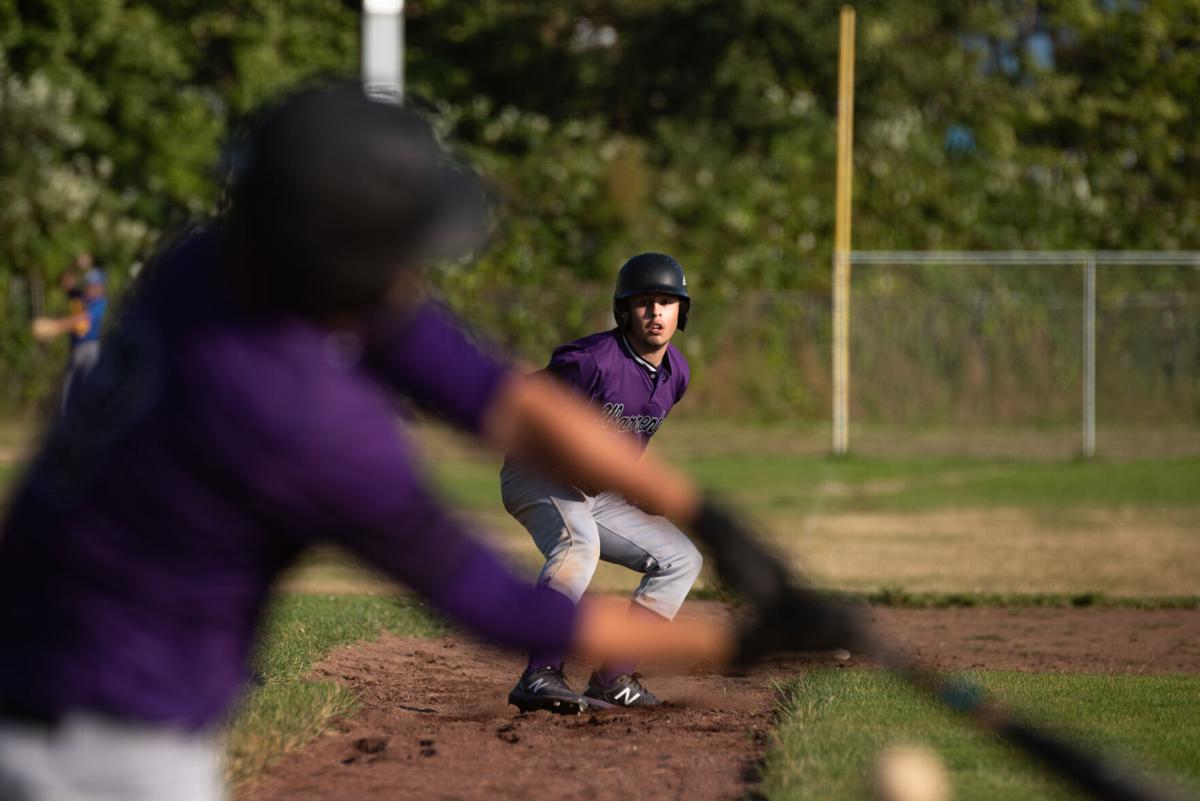 Warrenton's Ryan Hoagland leads off from third base as a teammate makes contact with a pitch.

Warrenton’s catcher Duane Falls looks for another play after getting an out at home plate.

Warrenton's Ryan Hoagland leads off from third base as a teammate makes contact with a pitch.

The most exciting game of the summer had the cars at Ernie Aiken Field honking Thursday night, when Astoria Ford rallied from a 7-2 deficit to start the bottom of the seventh inning for an 8-7 win over Warrenton.

Neah-Kah-Nie followed with a 14-5 win over the Warriors in the second game, and the Fishermen scored a 9-8 victory over Knappa to cap the Junior State baseball triple header.

After Warrenton scored four runs in the top of the first inning — highlighted by back-to-back RBI doubles by Falls and Atwood — Moore took the mound in the second inning, and retired nine straight over three innings.

The Warriors tacked on two runs in the fifth, as Talon McGrorty was hit by a pitch, then eventually scored on a wild pitch.

Josh Earls drew a walk, advanced to third on a single by Ryan Hoagland then scored on an errant throw.

Falls pitched five innings for Warrenton, struck out eight and walked five, and also picked two runners off first base.

Trailing 7-2, the Astoria Ford bats finally heated up in the bottom of the seventh.

Aiden Giles led off with a single to right, Dylan Carlson was hit by a pitch, Tony Tumbarello singled to right and Gunnar Olson drew a bases-loaded walk to force in the first run.

After a pitching change, Karson Hawkins doubled to the fence in right field, bringing in two more runs.

Moore had a ground rule double to deep left center to score Olson and Hawkins, tying the game at 7-7.

Bo Williams drew a walk to put runners at first and second with no outs, and Sven Johnson wasted no time in ending it, with a line drive to center scoring Moore with the walk-off, game-winning run.

“It took us six innings to wake up, but the boys never gave up,” said Astoria Ford coach Tyler Lyngstad. “I am extremely proud of the effort today.”

Warrenton had to turn right around and play one of the hottest teams in the region this summer, the Neah-Kah-Nie Pirates.

With previous wins this summer over Astoria Ford and Knappa (including a 13-0 victory over Astoria Ford two days earlier, and a 7-0 win over Knappa), the Pirates built an 8-2 lead over Warrenton after four innings, then ended the game with six runs in the fifth (plus the two-hour time limit) for a 14-5 win.

Falls had three of Warrenton’s six hits, with a double.

The Warriors entered the day with just 10 players, including two incoming eighth graders, and finished their second game with nine, when outfielder Hordie Bodden Bodden left with a slight injury.

“Our youth really showed today,” said Warrenton coach Lennie Wolfe. “It was the first time our young pitchers had an off-day, and we didn’t exactly help ourselves in the field (with eight errors in the loss to Neah-Kah-Nie). But we just lost a doubleheader, and even with the youth we have, we’re still 7-3 for the summer, so I can’t really complain.”

Warrenton is scheduled to play additional games Monday and Wednesday at Aiken Field.

Astoria Ford had to rally again in the nightcap against Knappa, ultimately a 9-8 win for the Fishermen.

Down 3-0 early, Astoria tied the game in the fourth, only to have the Loggers score three more runs in the fifth for a 6-3 advantage.

The Fishermen finally scored all the runs they would need with a six-run sixth inning.

A bases-loaded double by Gunnar Olson tied the game at 6-6 and Tony Tumbarello brought in two more runs with a single.

Trailing 9-6 entering the seventh, the Loggers staged a rally of their own, scoring twice and putting the tying run at third base, before Bo Williams retired the final batter on a ground ball to preserve the win.