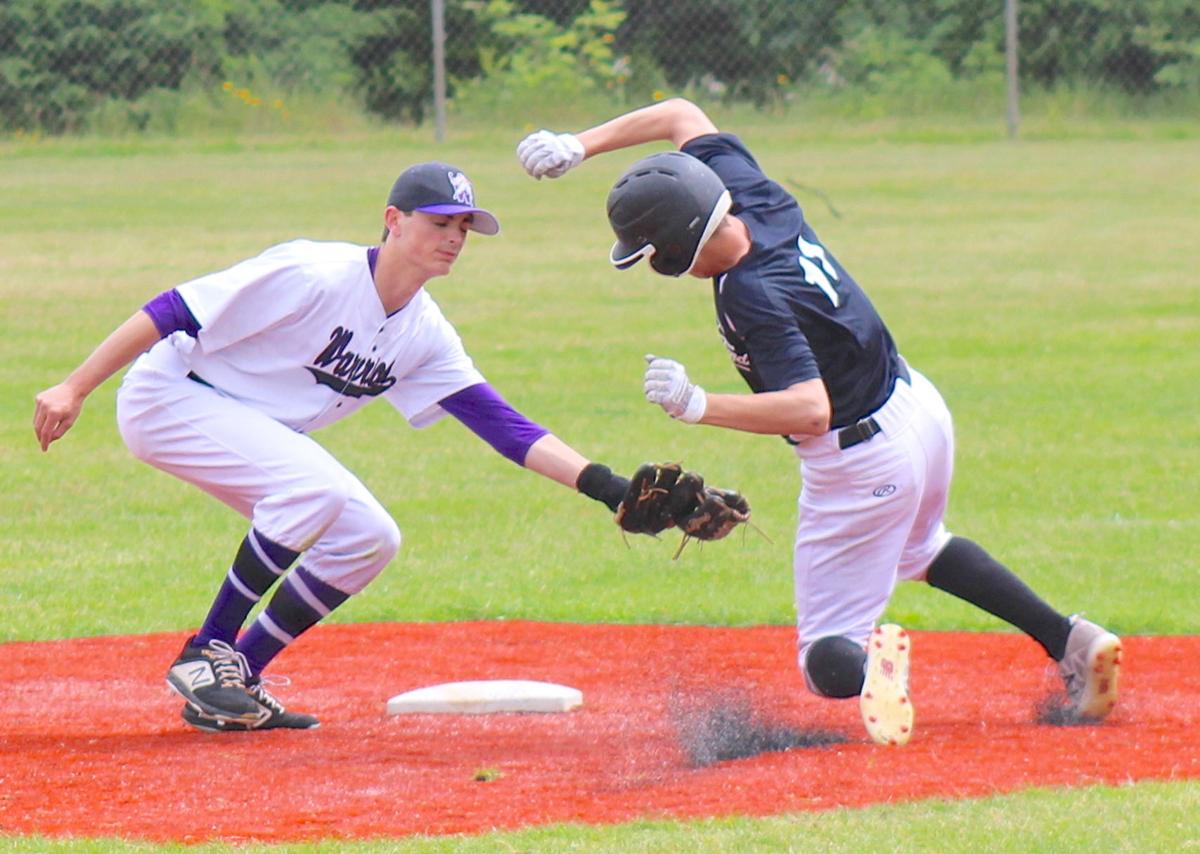 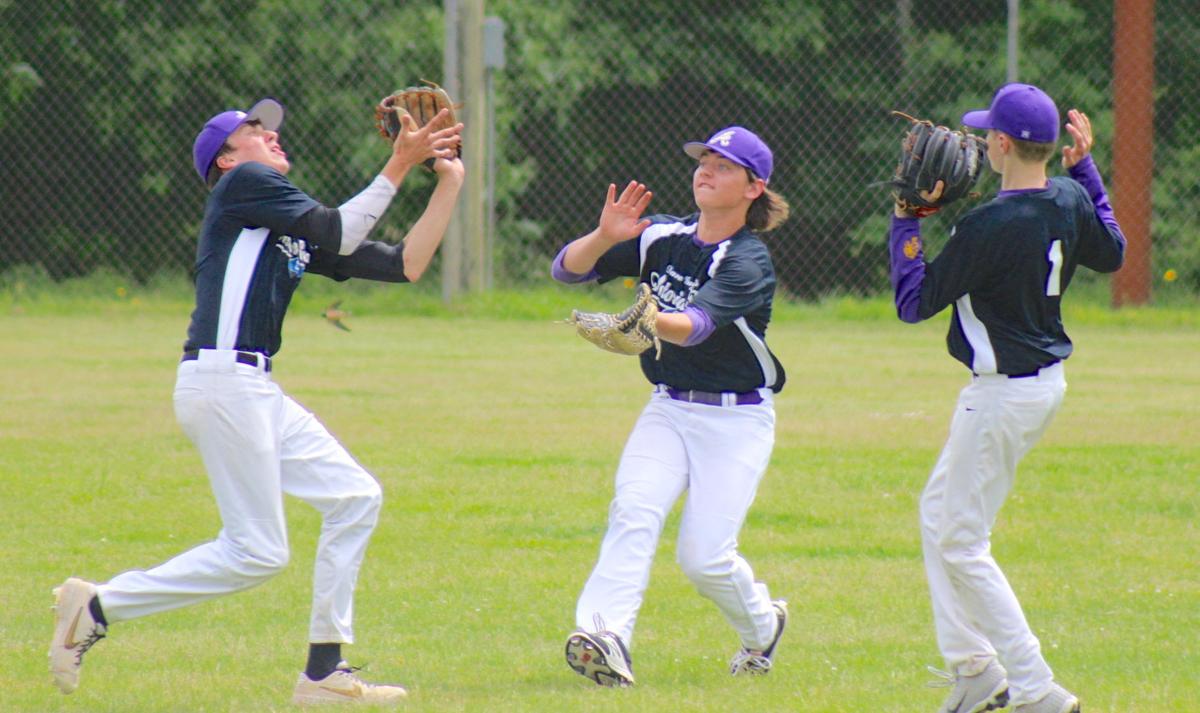 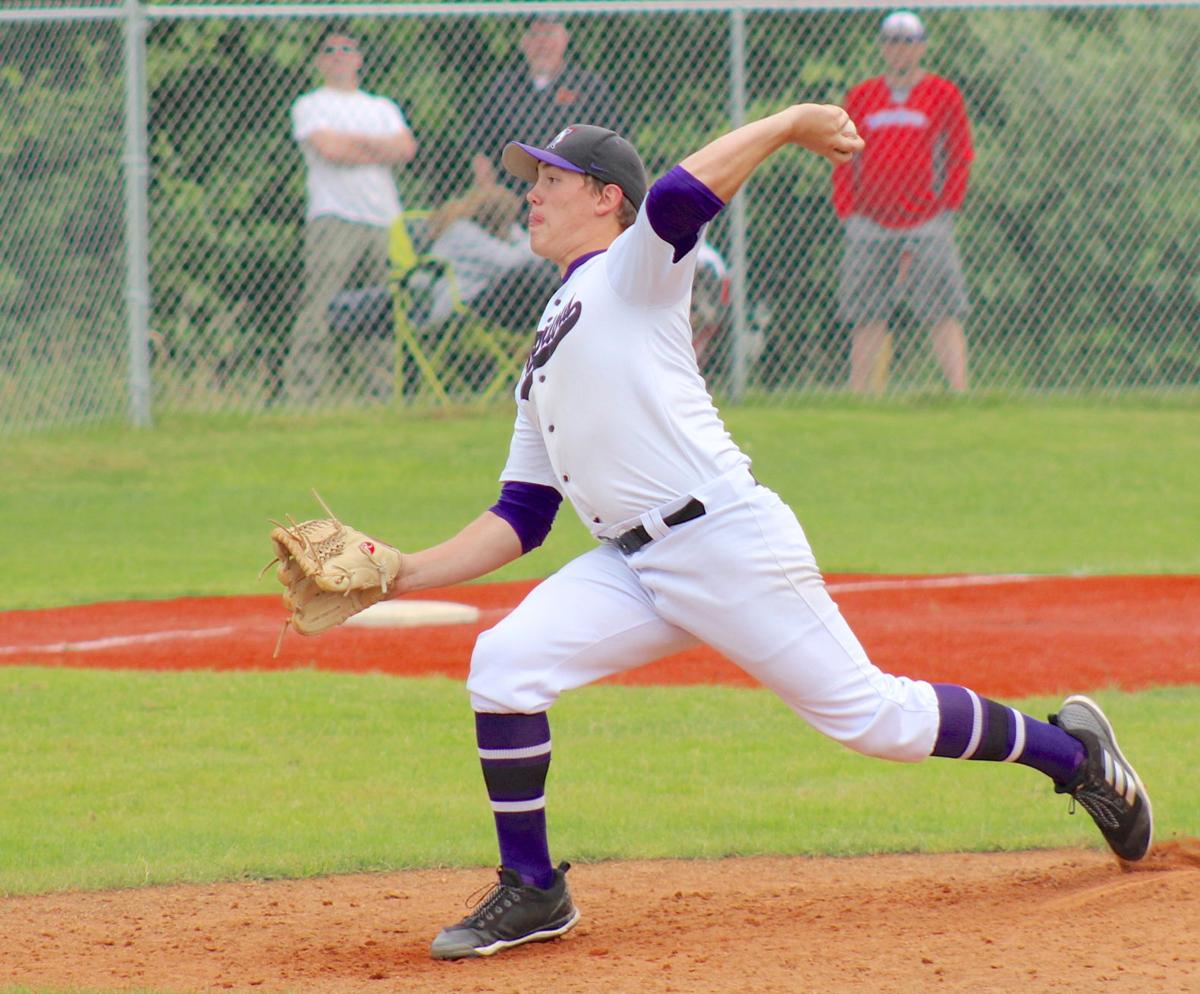 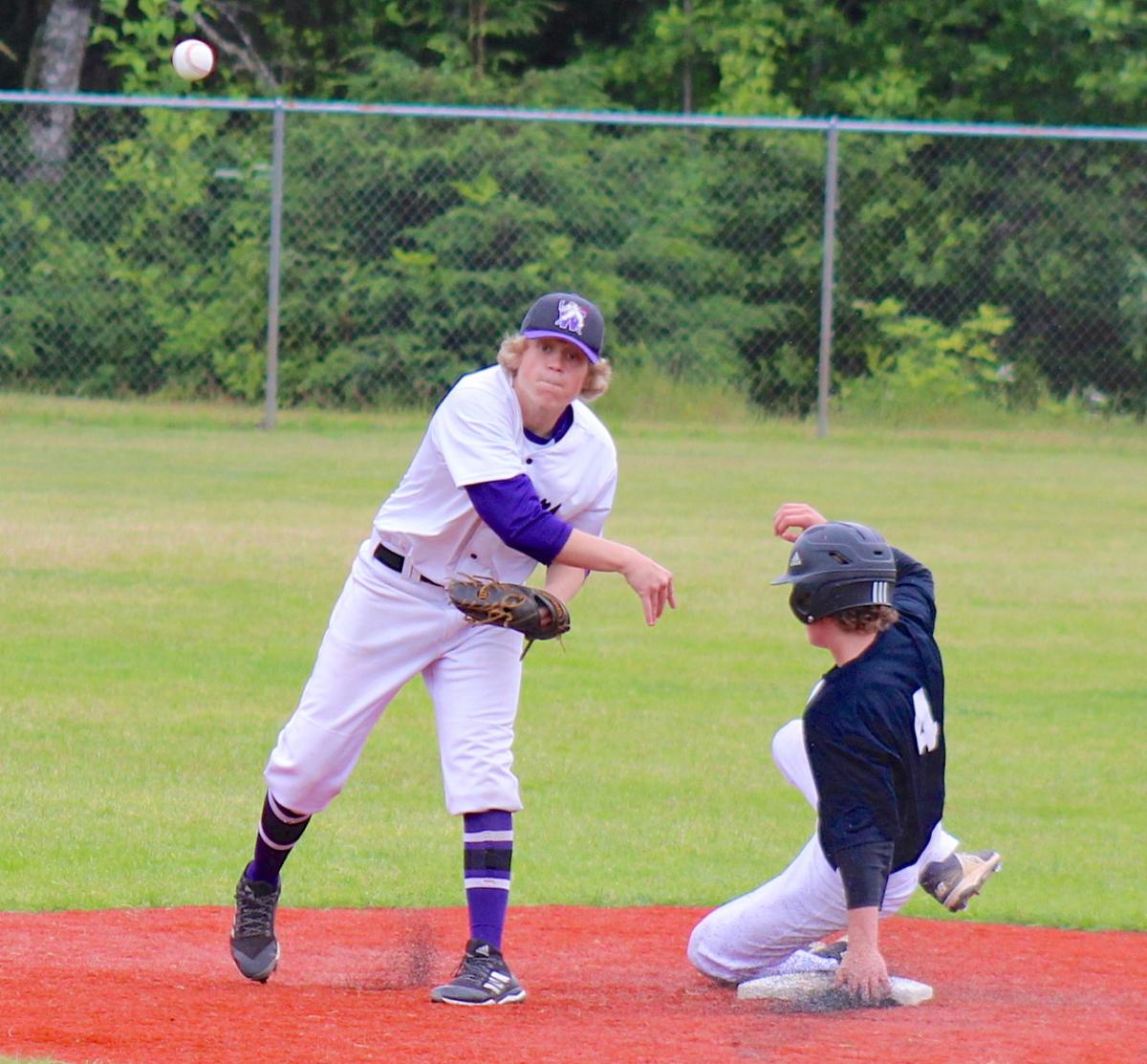 Warrenton second baseman Gabe Breitmeyer throws to first base in hopes of completing a double play, but the throw was not in time. 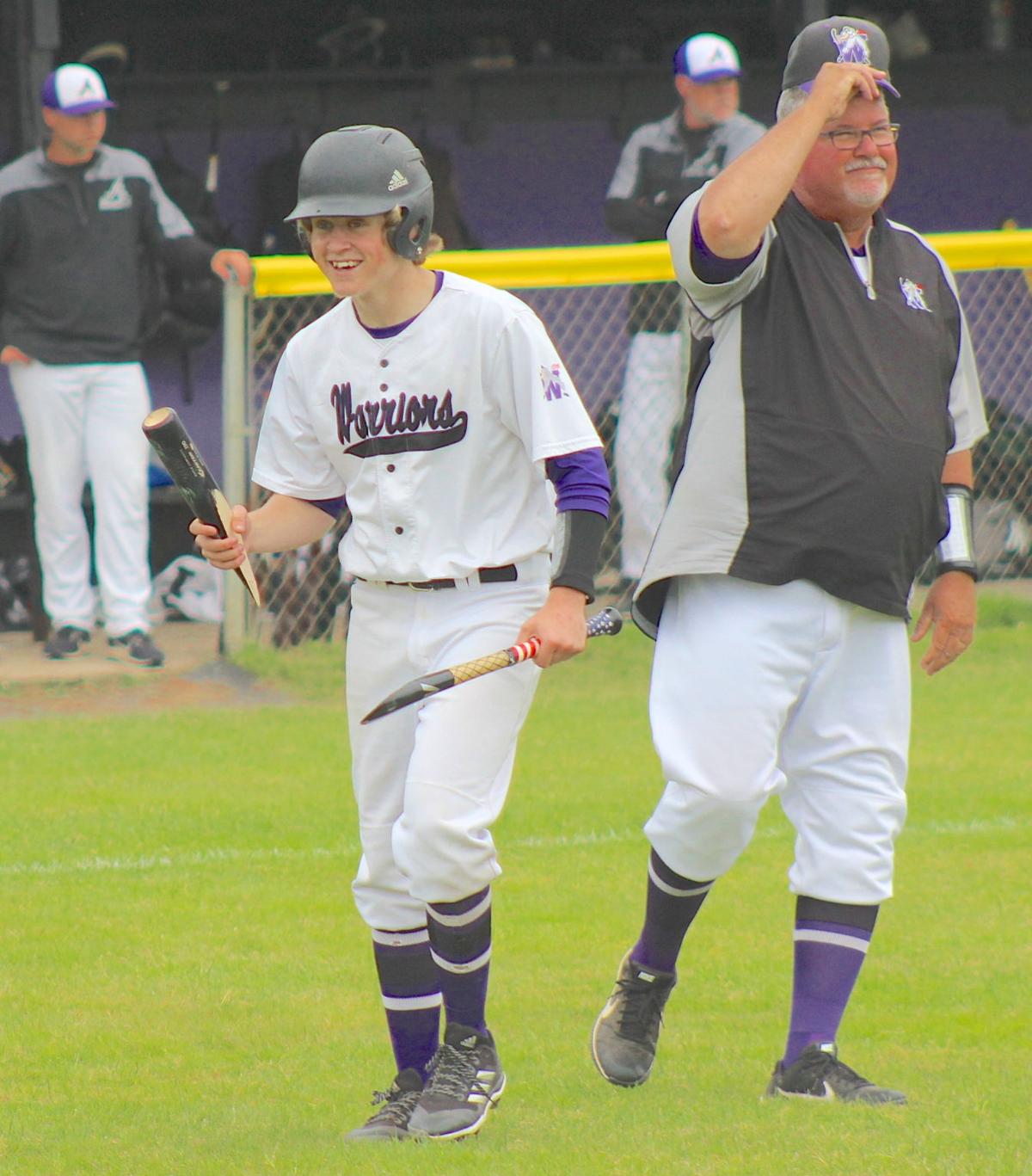 Warrenton coach Lennie Wolfe hands Gabe Breitmeyer the remnants of a broken bat, on a base hit by Duane Falls in Sunday’s game.

Warrenton second baseman Gabe Breitmeyer throws to first base in hopes of completing a double play, but the throw was not in time.

Warrenton coach Lennie Wolfe hands Gabe Breitmeyer the remnants of a broken bat, on a base hit by Duane Falls in Sunday’s game.

The Warriors’ win over the Fishermen was Warrenton’s third straight victory, after a Friday loss to Kennedy, in which Trojan pitcher Josh Valladares tossed six innings of a combined no-hitter to beat the Warriors.

Warrenton bounced back with a pair of 6-5 wins Saturday over Portland Eastside and Tillamook, then played solid defensive baseball Sunday in the victory over Astoria Ford.

“Overall, except for three or four errors against Kennedy, we were sound defensively for the entire weekend,” said Warrenton coach Lennie Wolfe. “Ethan Caldwell made some very nice plays for us (Sunday) at first base, and Devin (Jackson) threw very well. Any time you can get 90 pitches out of a guy, he’s done a good job.”

Austin Little was 2-for-3 and scored twice for Warrenton, which built a 6-1 lead after three innings, highlighted by a two-run single from Ryan Hoagland in the first inning.

Hoagland had two hits and drove in two runs, while teammate Jake Morrow was up to his summer specialty, getting hit by two pitches.

Gabe Breitmeyer had two RBIs for the Warriors, who had eight different players draw walks.

Duane Falls had a broken-bat single in the fifth inning for an 8-2 lead, before the Fishermen scored twice in the top of the sixth on two bases loaded walks.

Jackson was the winning pitcher, allowing six hits with three strikeouts and five walks, before giving way to Morrow with one out in the sixth.

“We ran the bases very well, I was very happy with the pitching and the defense … and we’ve won six out of eight games so far this summer,” Wolfe said.

The Warriors host the Warrenton Challenge next weekend, with visiting teams including Churchill, Crescent Valley, Neah-Kah-Nie and Tillamook.

Prior to Sunday’s final game vs. Warrenton, the Fishermen won two of three games Friday and Saturday, all by one-run margins.

On Friday, Astoria Ford snapped a 2-2 tie with a run in the bottom of the seventh to beat Portland Eastside, 3-2.

The Fishermen had seven hits, two apiece for Adam Feldman and Leo Matthews.

Trailing 2-0, Astoria Ford scored two runs in the bottom of the fifth to tie the game.

In the seventh, Matthews led off with an infield single and took second on a walk to Feldman.

Dylan Rush, who earlier drew a walk and was hit by a pitch, laid down a bunt and Matthews scored on a throw to first for the walk-off winner.

In a Saturday morning pitcher’s duel, Kennedy topped the Fishermen 1-0.

Rush allowed five hits and struck out nine with one walk, but gave up the game’s lone run in the bottom of the third inning.

The Fishermen had just two hits, including a double by Joe Strange.

And just before facing the Warriors on Sunday, the Fishermen gained a little revenge against Kennedy, scoring a 1-0 victory behind a three-hitter by Astoria Ford pitcher Will Eddy.

Strange had another double for one of Astoria Ford’s four hits, while Ryan Stutznegger drove in the only run on two-out, infield single that scored Strange in the bottom of the first inning.

Eddy did the rest from the mound, striking out two with four walks.

Strange and Stutznegger had two hits apiece for Astoria Ford.