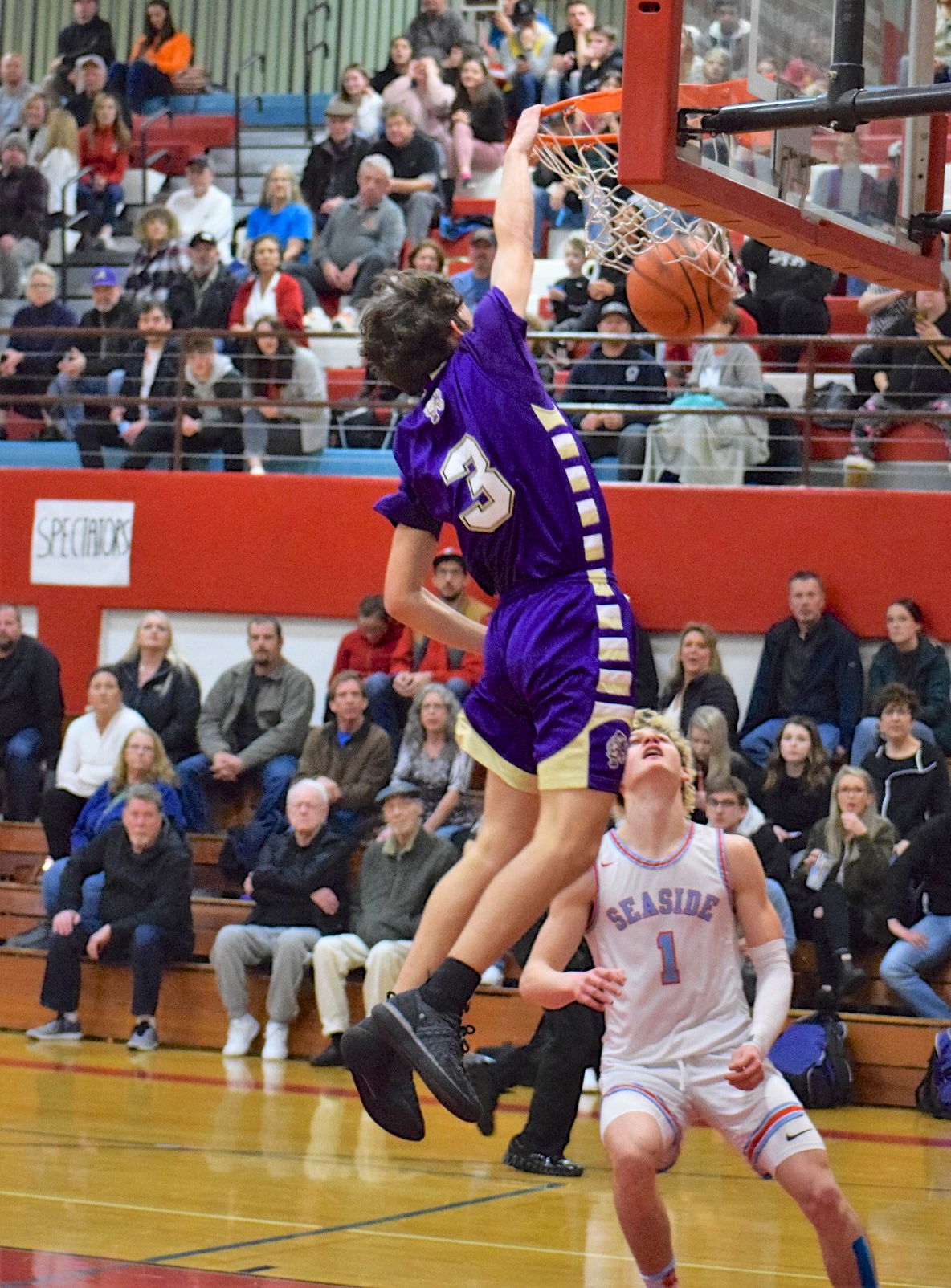 Ryan Stenblom's steal and dunk for Astoria was the highlight of the night in the boys' Clatsop Clash game. 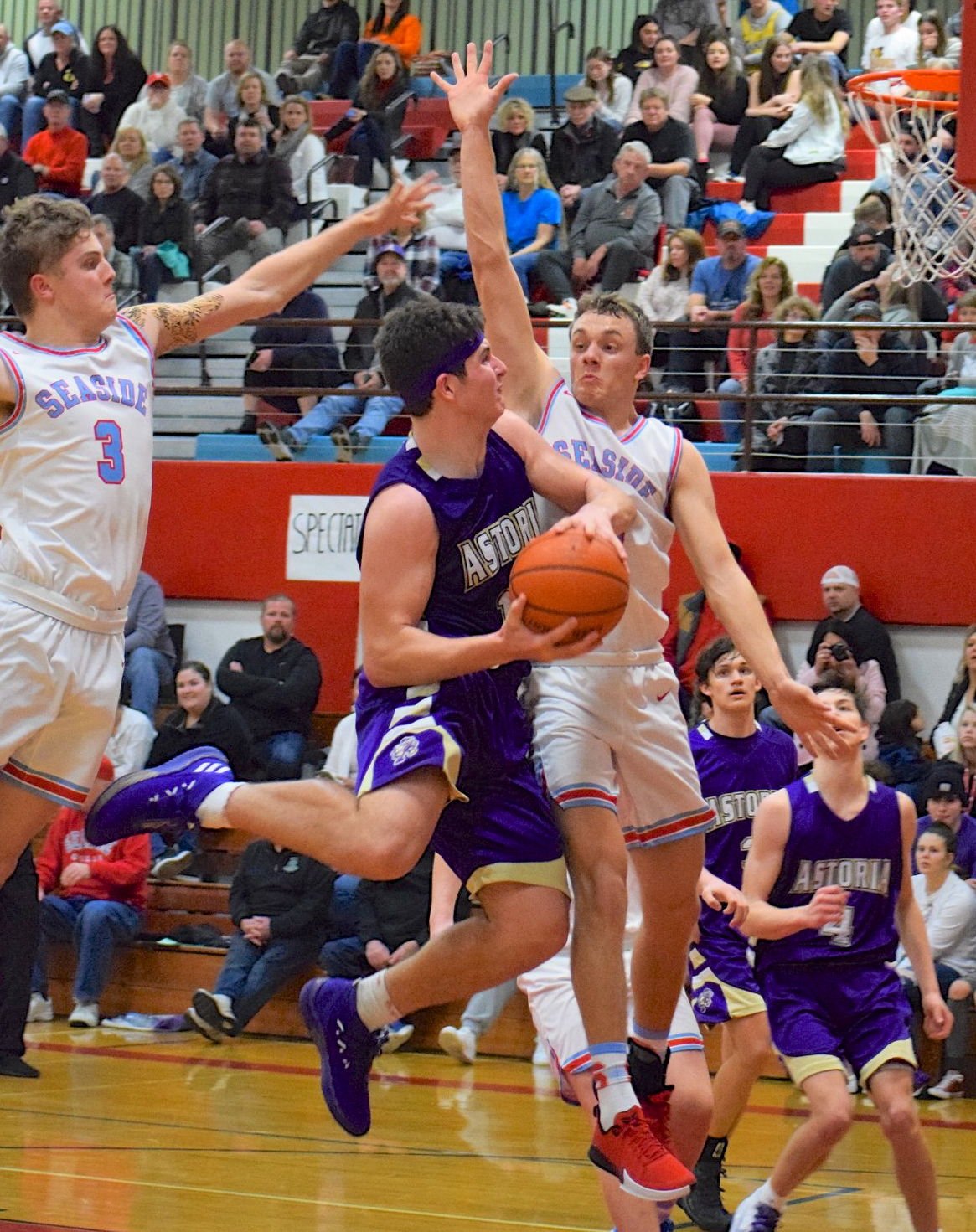 Astoria's Colton McMaster tries to go up against Ryan Hague, right, and Seaside's strong wall of defense in Friday's game. 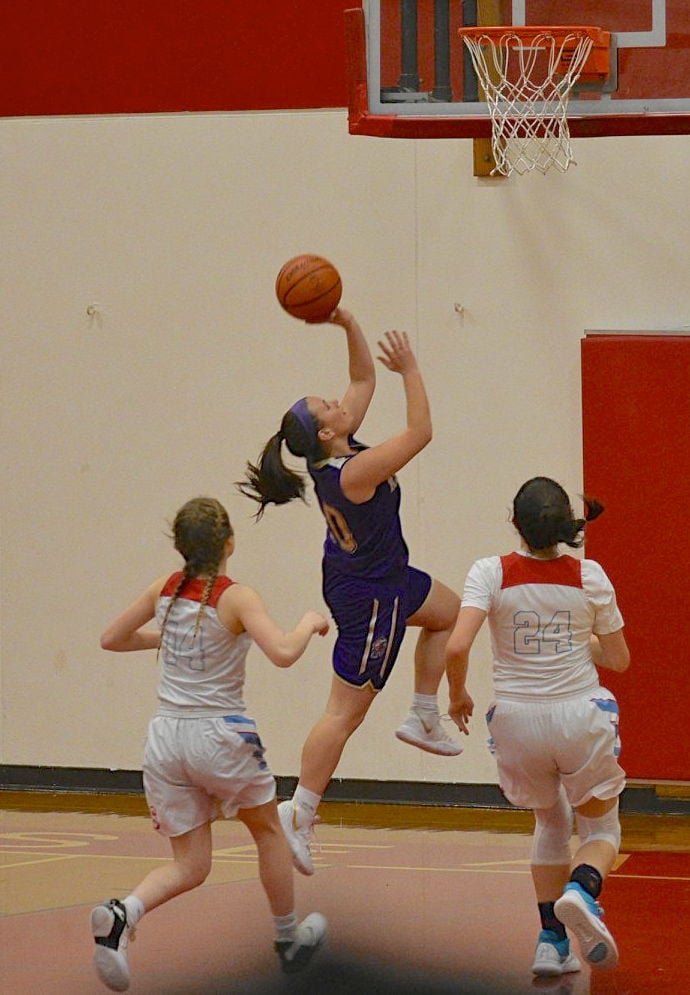 Julia Norris, on her way to scoring two of her 17 points for the Astoria girls. 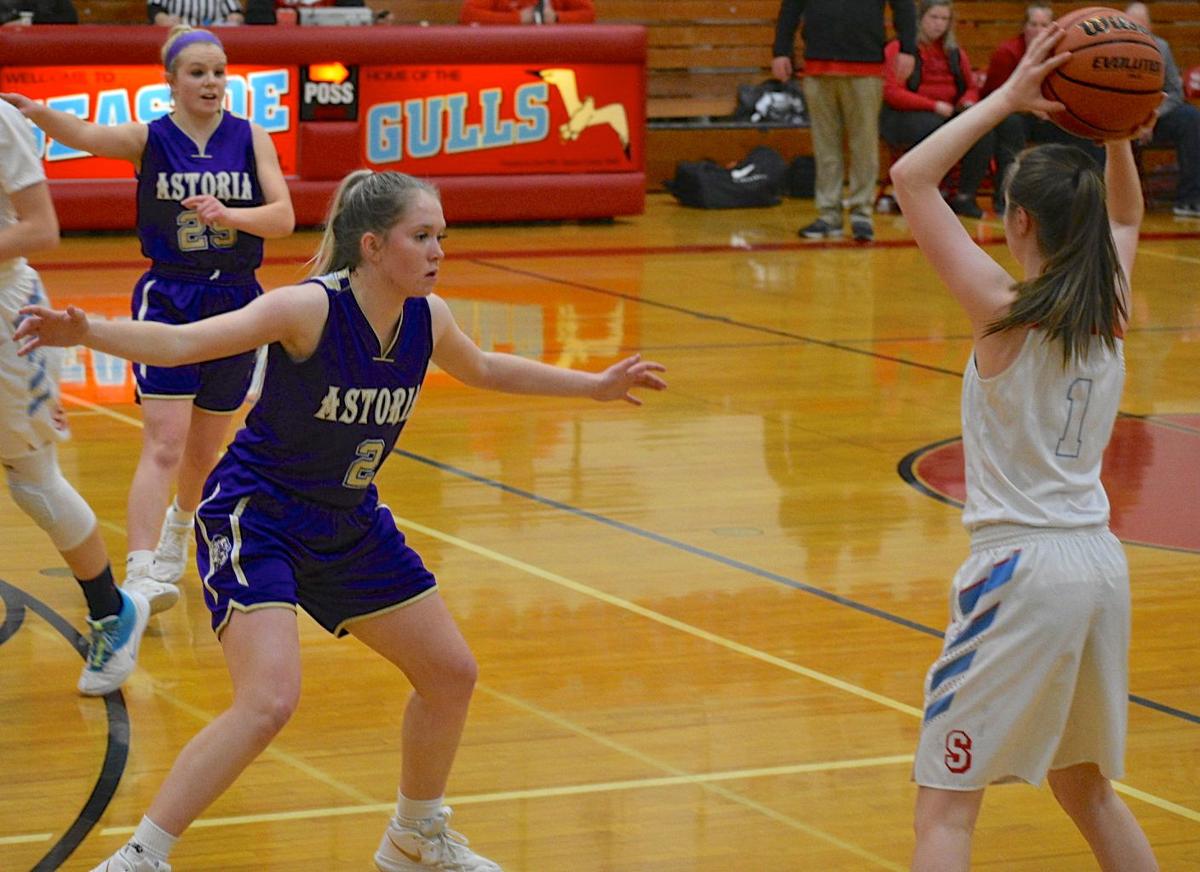 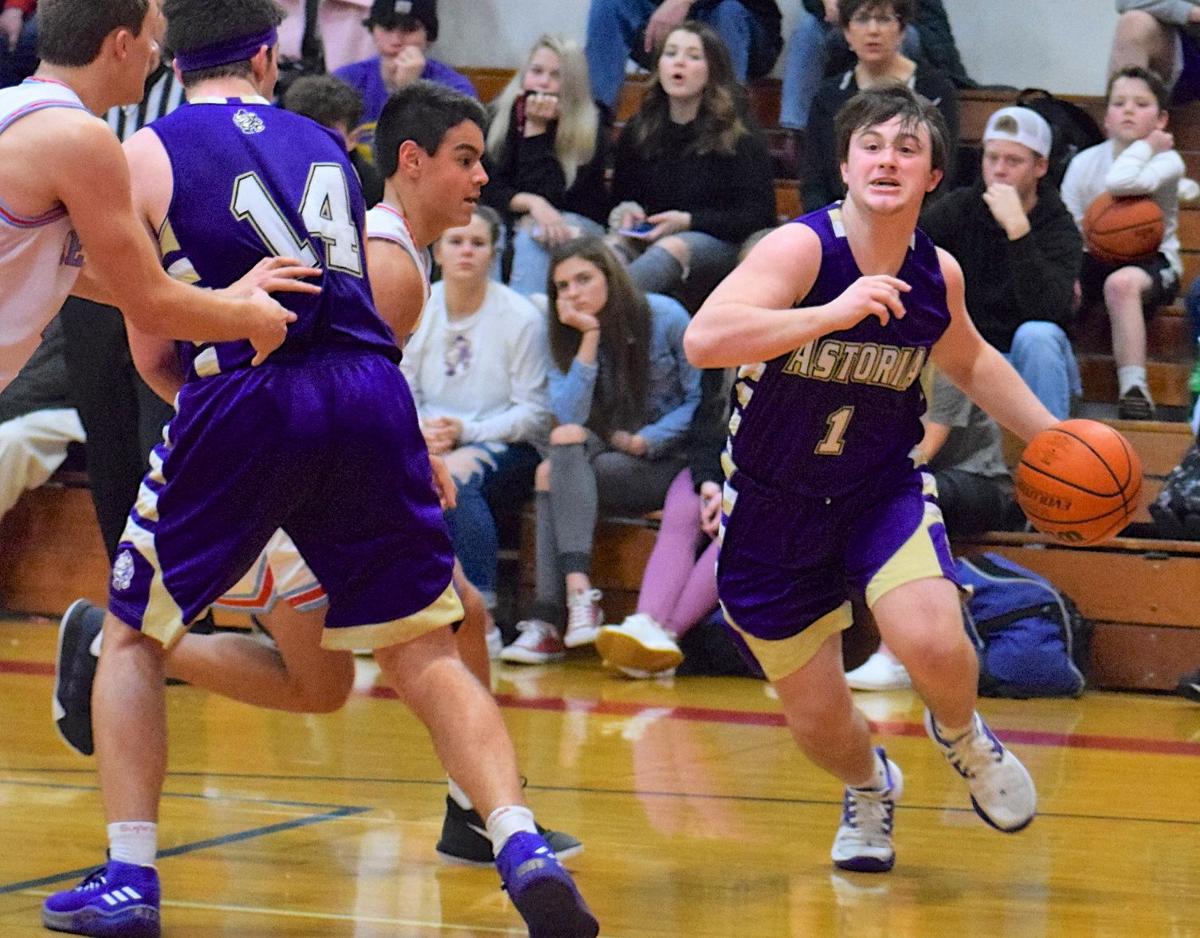 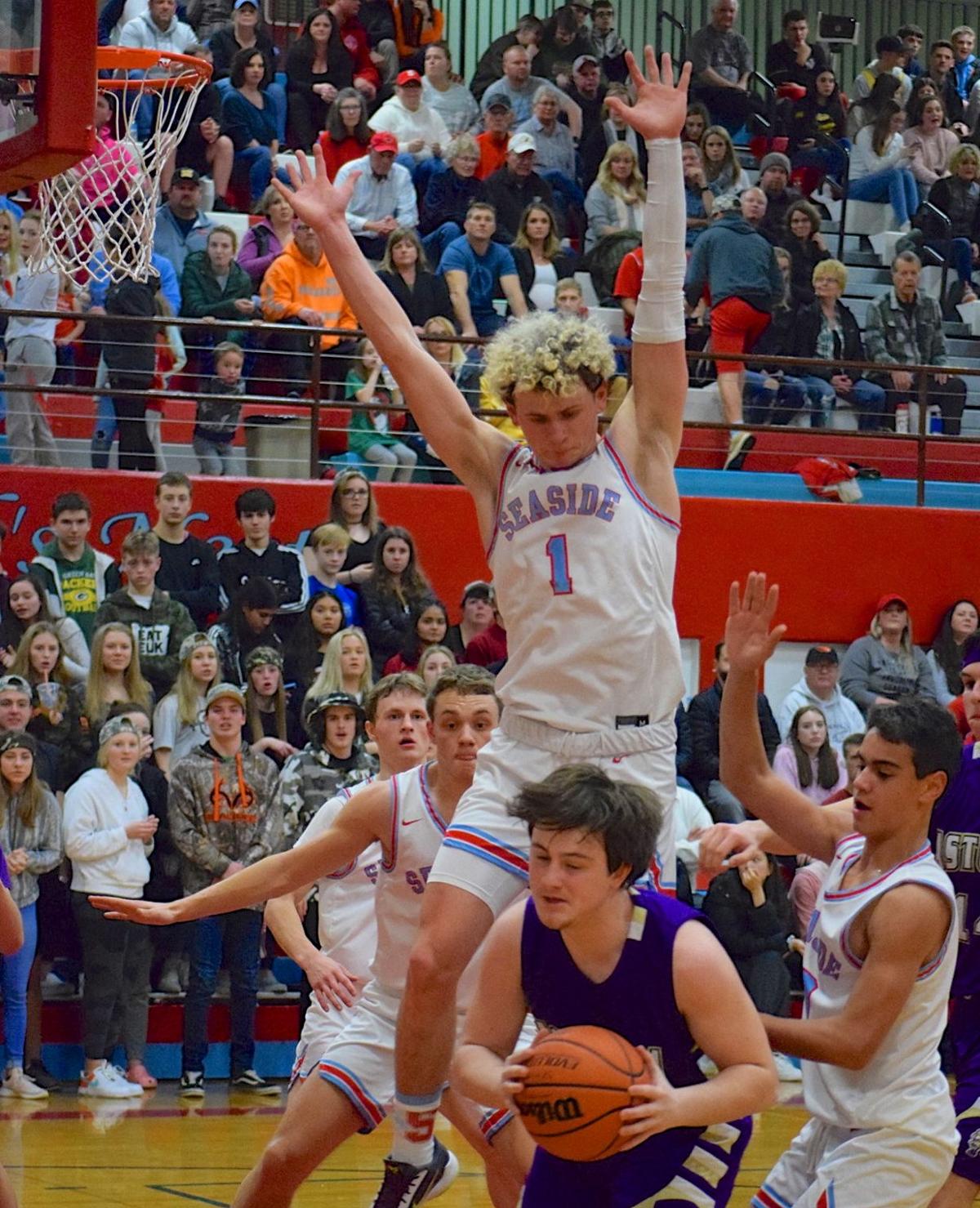 Ryan Stenblom's steal and dunk for Astoria was the highlight of the night in the boys' Clatsop Clash game.

Astoria's Colton McMaster tries to go up against Ryan Hague, right, and Seaside's strong wall of defense in Friday's game.

Julia Norris, on her way to scoring two of her 17 points for the Astoria girls.

SEASIDE — The final Clatsop Clash basketball games of 2019-20 went out with a bang Friday night.

No major upsets, but the four teams at least put on a show for the last Clatsop Clash to be played alongside U.S. Highway 101.

Barring any state playoff meetings between the two schools, the last basketball games between the Fishermen and Gulls at Seaside High School (before it moves to its new campus) played out as expected.

In game one of Friday’s doubleheader, the No. 2-ranked Astoria girls took advantage of one bad quarter for the Lady Gulls in a 49-38 win over Seaside.

And the No. 2-ranked Seaside boys capped the Clash with a non-memorable finish, in a 65-37 victory over Astoria.

The Lady Fishermen and the Seaside boys both have plans on playing for state championships March 14 in Forest Grove, but neither team was at its best Friday night.

The Astoria girls trailed 8-1, missed their first eight shots from the field and committed 22 turnovers; and the Seaside boys missed 20 shots from the 3-point line.

For the most part, Friday’s games will be mostly forgotten by the time the next Clatsop Clash league meeting in Seaside takes place.

Winners of two games straight and fresh off a win at Banks, Seaside was hoping to pull off an upset against Astoria in the girls’ game.

But after jumping out to an 8-1 lead, the Lady Gulls were outscored 24-9 the remainder of the first half, then committed 15 turnovers in the third quarter and trailed 40-25 going into the fourth.

Astoria had 15 turnovers of its own in the second half, and missed 31 shots from the field.

Still, the Lady Fish improved to 5-0 in league play, and can officially lock up the Cowapa title with a win Tuesday at Banks.

Ellisa Blodgett had 13 points and Ruby Douglas added 10 for Seaside, which plays Tuesday at Valley Catholic, while the Fishermen travel to Banks.

“We had to avoid any sustained stretches of turnovers,” said Seaside coach Mike Hawes. “The third quarter it looked like we forgot everything we already had done. We thought we could throw the ball over (Kelsey) Fausett, when clearly we couldn’t.”

But, he said, “we were better through most of the night, as I thought we would. Nice to have Elly (Blodgett) help with some scoring. I think we can beat a lot of teams with that effort, just not Astoria. You can’t have any bad stretches, plus (against a team) that has a lot of offensively-skilled kids.”

In their previous meeting in January, Astoria held first half leads of 16-2 and 20-8 over Seaside, and Fisherman sophomore Colton McMaster scored 35 points. The Gulls made sure that neither happened in the rematch.

Three-pointers by Brayden Johnson and Everest Sibony sparked a 27-5 run, and the Gulls were never threatened after that.

Meanwhile, McMaster was held to six points, while Astoria struggled from the free throw line (7-for-20) and had eight of their 16 turnovers in the second quarter.

Johnson — the high-flying Seagull forward — finished with just five points, all in the first quarter. To pick up the slack, Ryan Hague led the Gulls with 16 points, followed by Beau Johnson with 11 and Sibony with 10 points off the bench.

Despite their 28-point loss, the Fishermen owned the highlight of the night, a steal and breakaway dunk by Ryan Stenblom to open the second half.

McMaster and Xander Marincovich added 3-pointers in a 9-2 run by Astoria to start the third quarter, and drew the Fishermen to within 40-26.

Both teams are on the road Tuesday with Astoria at Banks and Seaside at Valley Catholic.