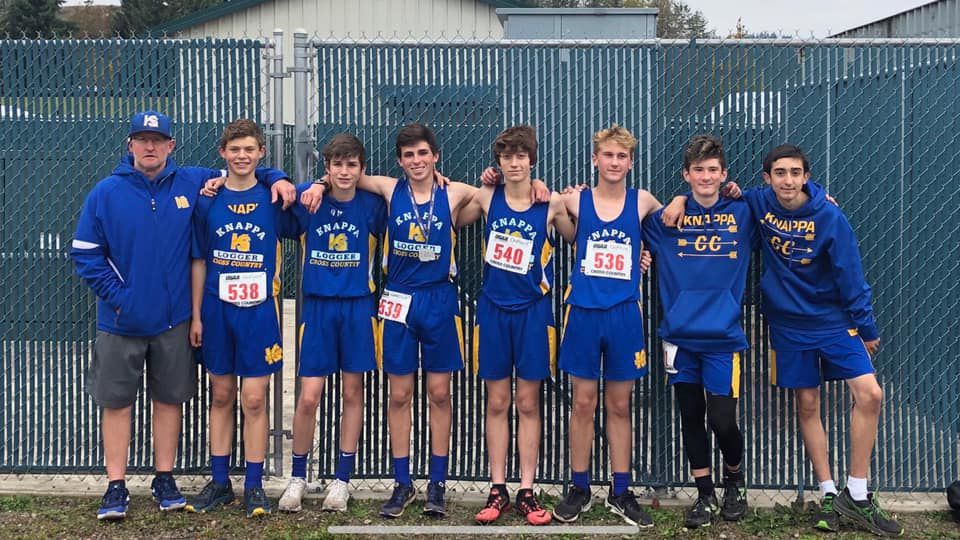 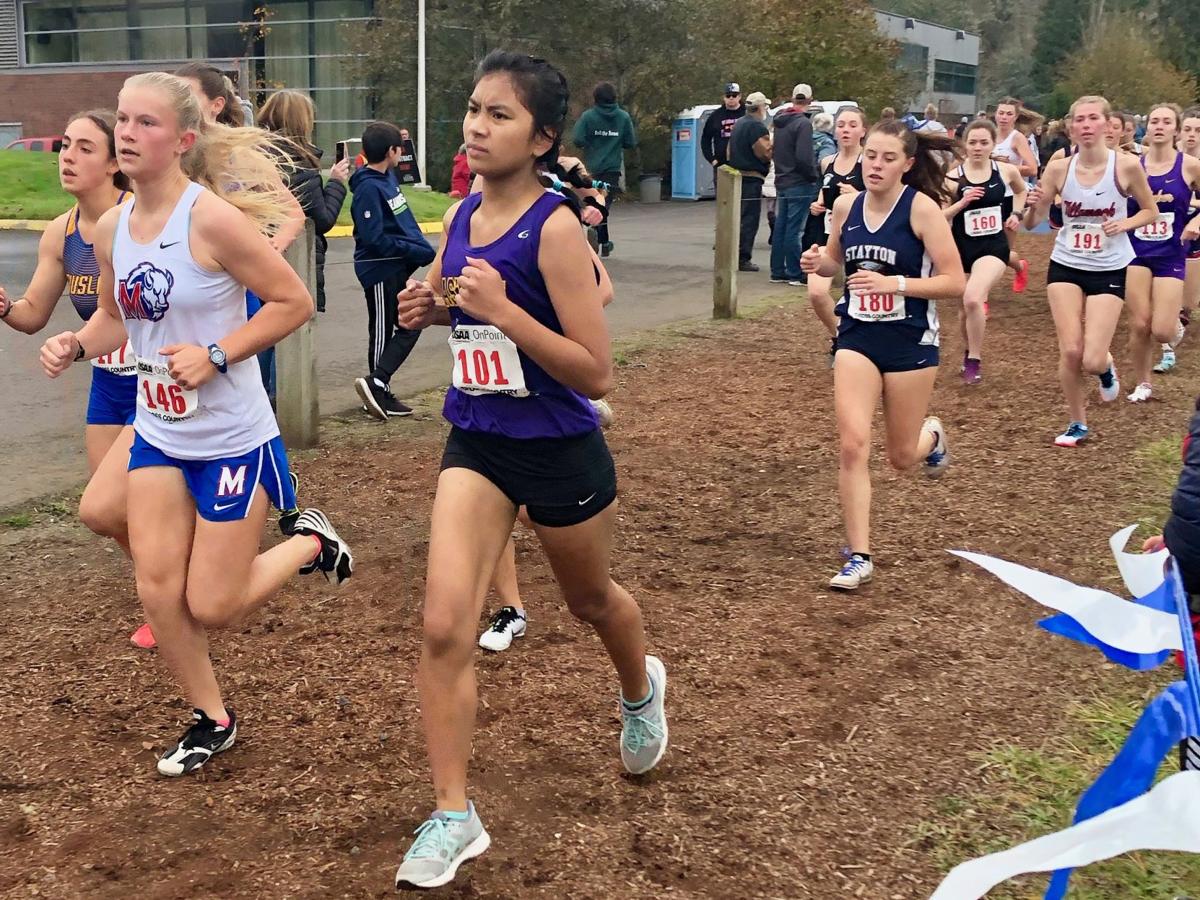 Kolyn Lachica (No. 101) scored key points for the Astoria girls as the fifth runner for the Lady Fishermen in Saturday’s meet.

Kolyn Lachica (No. 101) scored key points for the Astoria girls as the fifth runner for the Lady Fishermen in Saturday’s meet.

EUGENE — Knappa’s Robert Piña-Morton set the pace in Saturday’s OSAA 1A/2A state cross-country championship at Lane Community College, leading for the first 2 miles before fading to finish second, setting a school record of over 40 seconds at 16 minutes, 0.3 seconds and becoming the top finisher in program history in the process.

“He gave everything he had,” Knappa coach Stan Sporseen said. “He tries to dial it back sometimes to save for later but it’s just not in his DNA.”

Piña-Morton was right on track, hitting his goal of running 5:05 miles through the first two, but St. Stephen’s Academy’s Seth Bergeron had more in the tank and separated himself to win the state title by nearly 10 seconds.

“I tried to stay in the front and keep the lead, but he just pulled away from me at the end,” Pina-Morton said.

While disappointed that he couldn’t outlast Bergeron, Piña-Morton ended his cross-county career having set a new standard for Knappa runners. Behind the senior, freshmen Isaiah Rodriguez ran a personal-best 17:28 and Finn Corcoran ran a personal-best 18:20 to finish 25th and 48th.

In total, six of the Loggers’ seven runners clocked personal-bests on Saturday as the team totaled 150 points to finish in sixth place. Knappa finished just two points shy of Glide, which was fifth with 148 points, and a dozen shy of Heppner/Ione, which was fourth with 138 points.

“If you would have asked me at the beginning of the year if we’d be sixth in the state, I would have questioned your sanity,” Sporseen said, laughing.

Sporseen said it’s been “hit or miss” at times whether Knappa’s even able to field an entire team, let alone be within striking distance of bringing home a trophy at state. But while he admits he’s best at getting his runners in shape and inspiring them to run their best, Sporseen said he knows little running strategy and credited the team’s youth for Saturday’s performance.

“They’re so young, they honestly didn’t know any better,” he said.

Sporseen will return five freshmen and said he’s focused on trying to add to the girls program, too. But for now, Saturday serves as a special moment for the Loggers’ program.

Late on Saturday in the 4A races, Astoria’s girls team collected two top 25 finishes and earned 198 points to take eighth place, while John Clement ran a 17:01 and Nikolai Boisvert ran a 17:17 to finish 35th and 43rd in the boys race, respectively.

Both times for Clement and Boisvert were personal-bests by at least 45 seconds.

“They both got out really hard and ran consistent races,” Astoria coach Andrew Fick said. “It’s a huge way to finish the season for both of them.”

While Clement and Boisvert were both pleased with their personal-best times, both are focused on helping lead the entire boys team to state next season.

“We have to figure out how to not die at districts,” Boisevert said. “We want to get the whole team here next year.”

Junior Sophie Long was the top finisher on the girls side after shaking off nerves to run strong on her birthday, taking 23rd in a personal-best 19:59.0. Freshman Ella Zilli wasn’t far behind, running a one-minute personal-best of 20:06.9.

Zilli followed Fick’s advice before the race, focusing on just passing one individual runner at a time.

“I kind of knew that today was the day,” Zilli said. “It was now or never for this year, and so I just went for it and tried to pick people off.”

The team’s effort on Saturday gave them the edge over Klamath Union and La Grande, which finished in ninth and 10th with 200 and 204 points.

“You always want to finish on a high note, so everybody really stepped up and that helped us move up in the team standings,” Fick said.