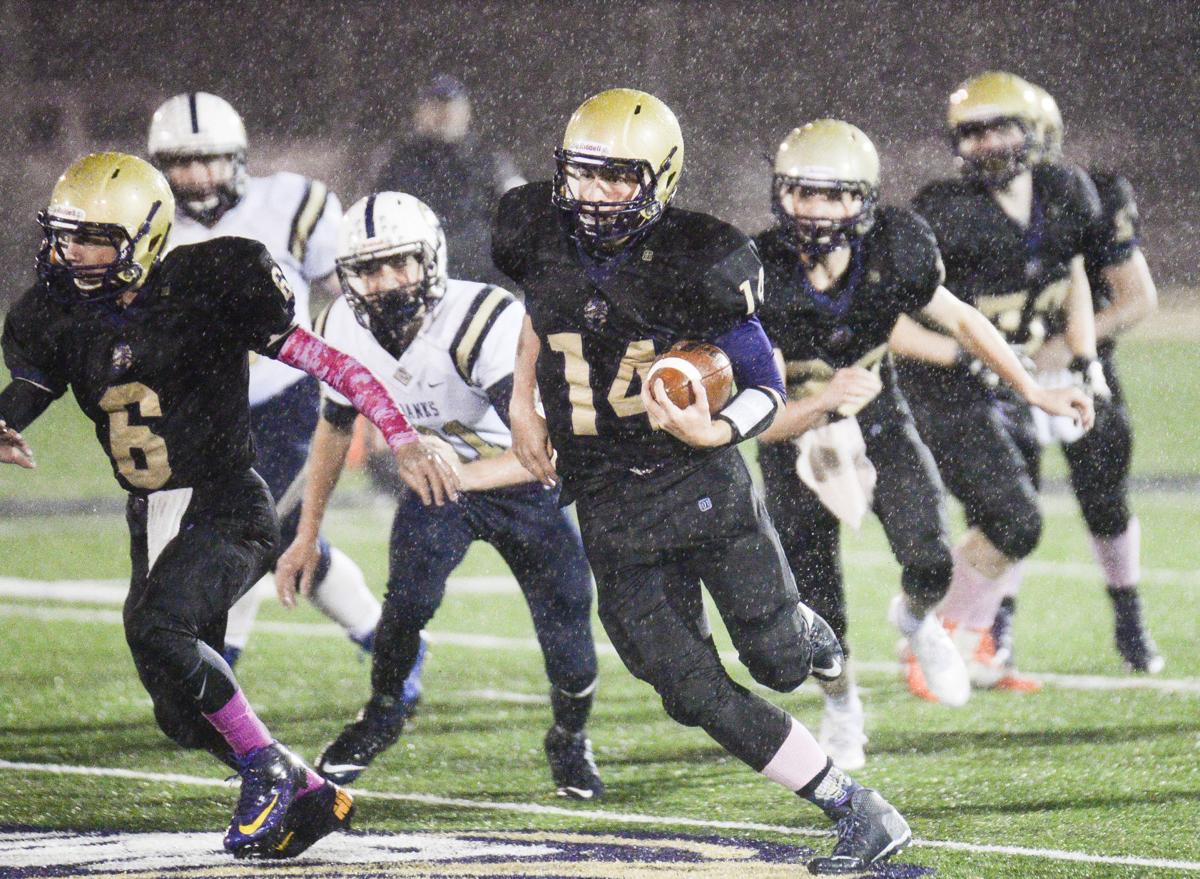 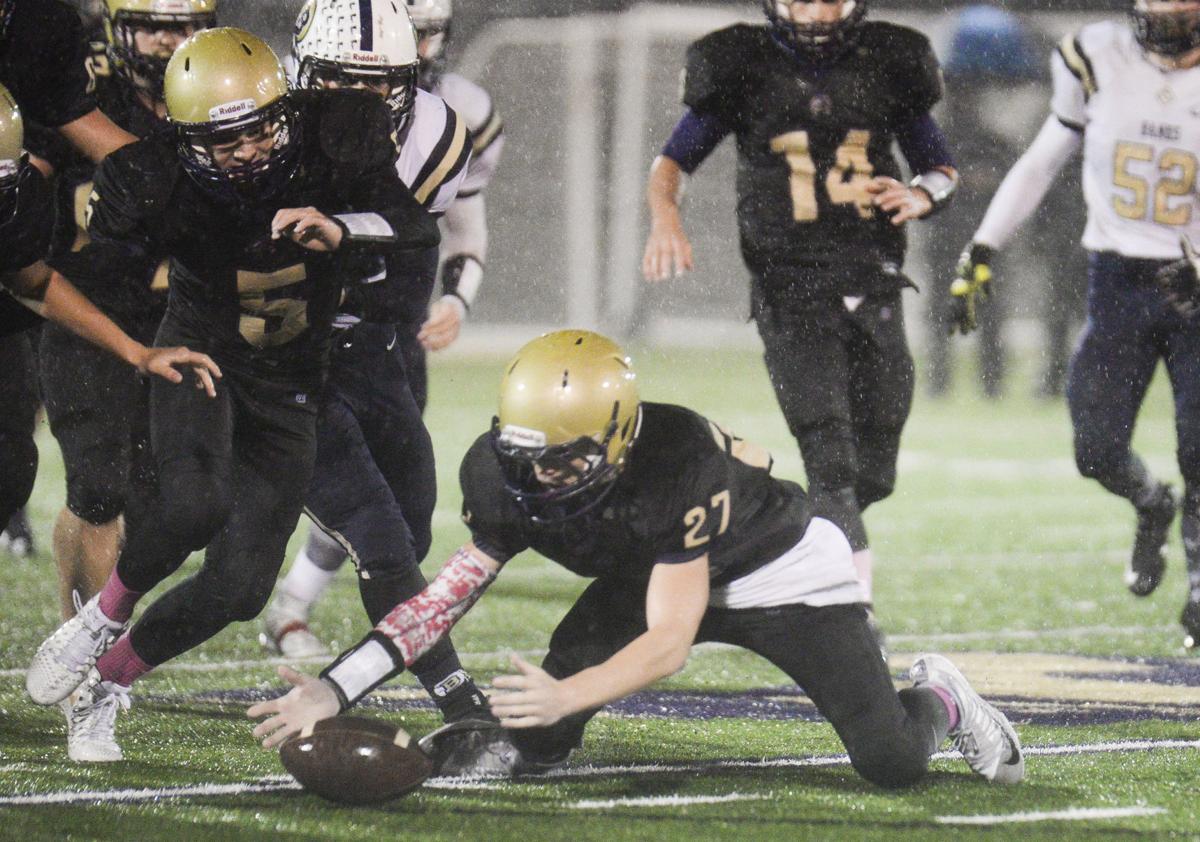 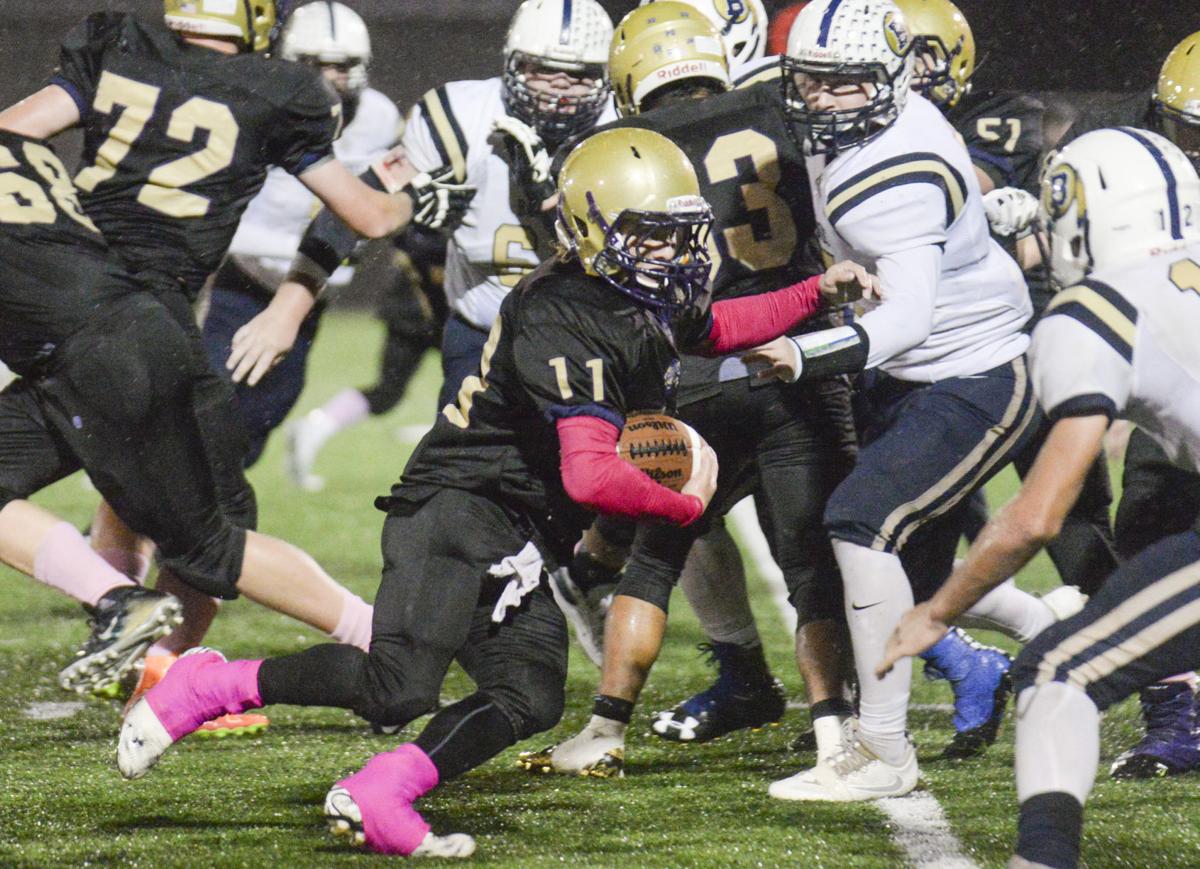 Tyler Ranta makes a run for the Fisherman Thursday at CMH Field. 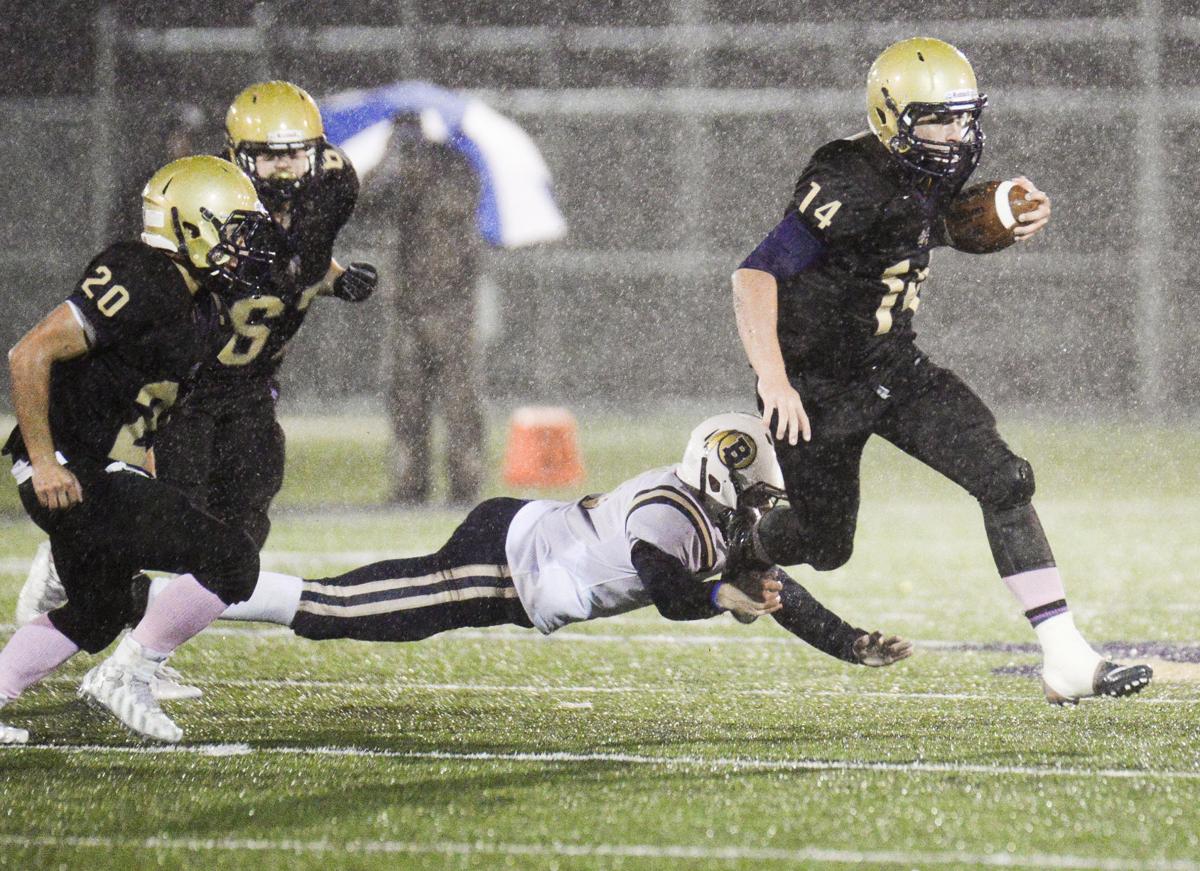 Astoria's Fridtjof Fremstad breaks a tackle during the first quarter against Banks on Thursday. 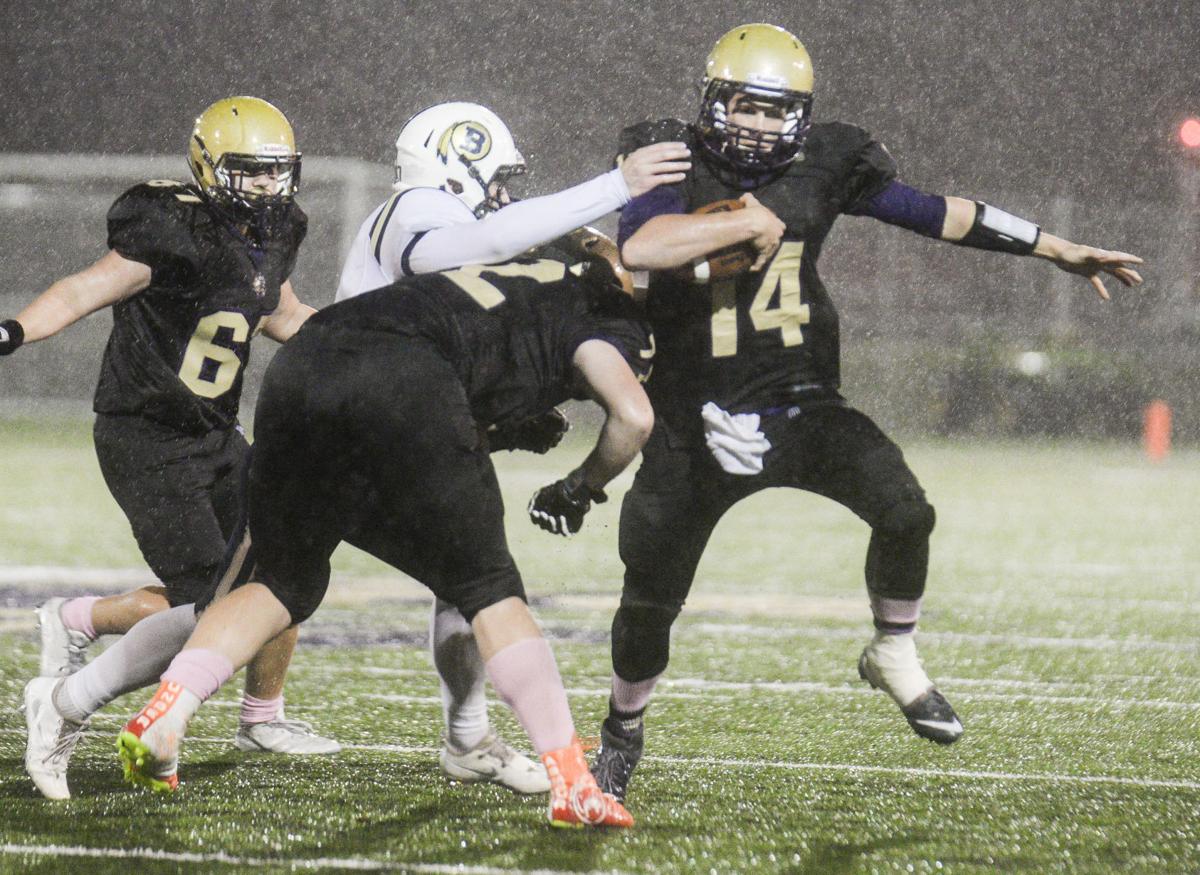 Astoria's Fridtjof Fremstad breaks a tackle as Astoria faces off against Banks on Thursday at CMH Field in Astoria. 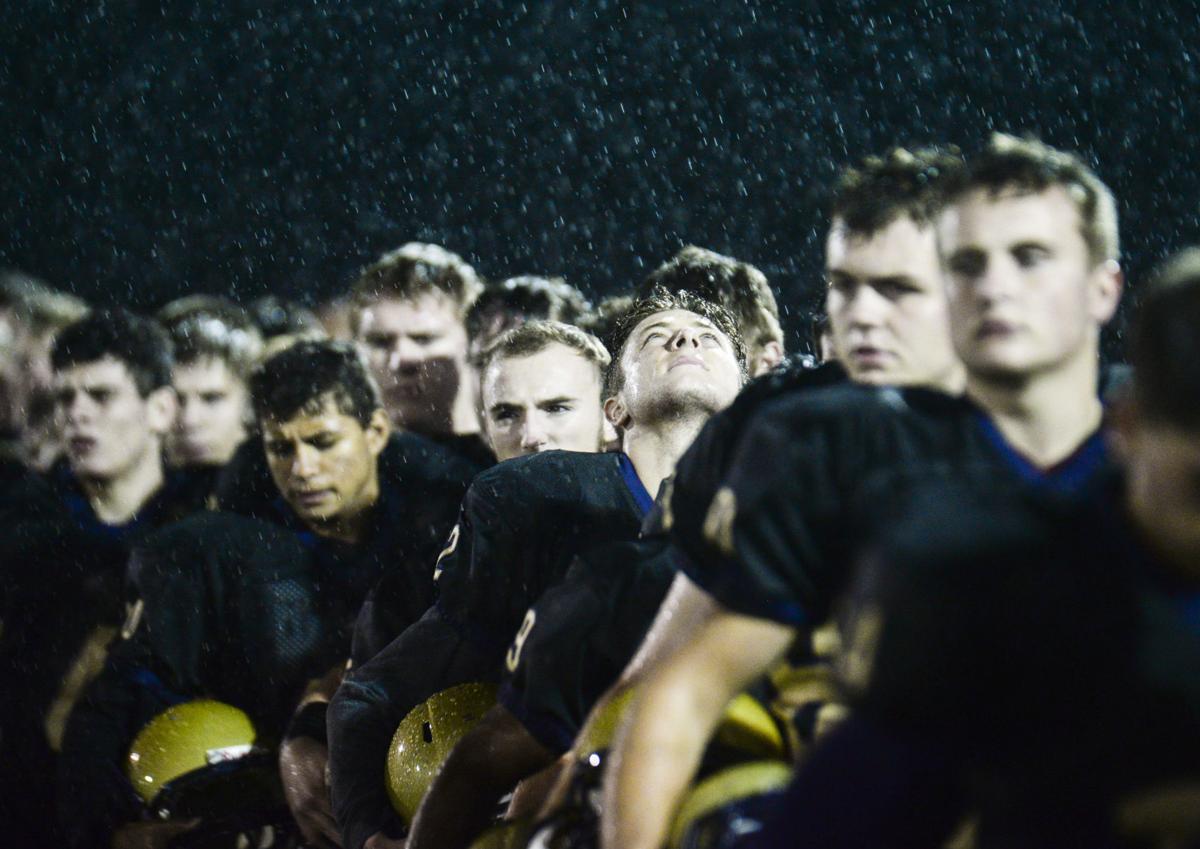 Rain falls as Astoria football players stand at attention for the National Anthem as Astoria faced Banks on Thursday.

Tyler Ranta makes a run for the Fisherman Thursday at CMH Field.

Astoria's Fridtjof Fremstad breaks a tackle during the first quarter against Banks on Thursday.

Astoria's Fridtjof Fremstad breaks a tackle as Astoria faces off against Banks on Thursday at CMH Field in Astoria.

Rain falls as Astoria football players stand at attention for the National Anthem as Astoria faced Banks on Thursday.

What would have been a mud bath at John Warren Field two or three years ago … was more like a fun game of slip ’n’ slide (with wind) Thursday night at CMH Field.

In a driving wind and rain storm, the Astoria football team put the “Fighting” back in Fishermen, with a 22-6 win over Banks.

The Fishermen adapted to the conditions a lot better than the Braves, to clinch at least a share of the Cowapa League championship.

Astoria improves to 4-0 in league play, one game up on the Scappoose Indians, who lost to Valley Catholic Thursday.

The game — and the storm, for that matter — brought back memories of Astoria’s 2008 46-26 win over Banks at John Warren, when Jordan Poyer ran for six touchdowns in a driving rainstorm, a big win on the way to a state championship.

“I was thinking just before kickoff tonight, this game has a little ’08 feel to it,” said Astoria head coach Howard Rub, following Thursday’s win.

With one week left in the regular season, Rub’s team is right where it wants to be. Or close, anyway.

Undefeated in league play, ranked third in the latest state rankings, a six-game win streak and guaranteed at least a share of the league title.

“We’d like to get that No. 1 seed though,” said Rub, which is another thing winning coaches say. “We’d like that all to ourselves.”

A victory over Scappoose next Friday would give the Fishermen their first outright title since 2009.

On a night when running the ball was a little more conducive than throwing it, senior Tyler “Bubba” Lyngstad led the Astoria offense with 65 yards rushing on 15 carries.

Senior Fridtjof Fremstad — the most efficient quarterback at the Class 4A level — completed 6-of-7 passes for 63 yards and a score, with no turnovers.

Fremstad also rushed for a touchdown, and returned an onside kick 45 yards for the final nail in the coffin, after a late touchdown by the Braves.

On the other side of the field, the Braves fumbled five times (lost three), while quarterback Jake Evans completed just 1-of-5 passes for 23 yards.

He also completed one pass to the Fishermen, a late interception by Olaf Englund.

The Emotion Factor was certainly in Astoria’s favor, with Senior Night, and the loss of senior receiver Kyle Strange to a broken leg the week before. Strange watched the game from a wheelchair on the Astoria sidelines.

“With Kyle and Cole (Olson) being out, and Senior Night … there was a lot of emotion,” Rub said. “I thought our guys dealt with the loss of Kyle last week in a good way. We were obviously upset that we were going to lose one of our leaders, our captains and one of our best players.”

Meanwhile, when a player who normally plays guard on offense and wears No. 55 (Lyngstad) leads the team in rushing — that’s a telltale sign of what kind of game it was for the Fishermen.

“When our starting ‘Mike’ backer (middle linebacker) and backup guard is our leading rusher, you absolutely know what kind of night it was,” Rub said.

Offensively, “If you look at what we did in practice all week, we didn’t do much of that during the game,” he said. “Fortunately we were able to move the ball in our old-school T-formation.”

The weather “was still a part of it,” Rub said. “And we ended up winning the turnover battle, which was pretty huge.

“Fritz and Tyler had tremendous games, and you can’t say enough about our offensive and defensive lines. Their main athlete and running back, (Milo) Applebee, is quite a ballplayer, and for the most part we held him in check.”

And on a night when even the shotgun snaps were affected by the wind, Astoria put the first points up on a 31-yard field goal by Andrew Schauermann into a swirling wind, with 6:53 left in the second quarter.

The lights flickered at times and so did the scoreboard, but the power stayed on. The Braves didn’t.

Banks lost a fumble on its first possession; a key holding penalty helped end their second drive; and the Braves fumbled the ball away again on their third and last possession of the first half.

And the Braves picked up in the third quarter right where they left off in the second, as Evans lost a fumble on the second play of the second half.

The Fishermen gave it right back for their only turnover of the night, but the Braves shot themselves in the foot on an attempted quick kick on their next drive.

Evans — who was only 3 yards behind the line of scrimmage — punted the ball straight into the back of one of his linemen.

The ball deflected right back to Evans, who was tackled for a4-yard loss.

After the bungled punt by the Braves, Astoria drove 35 yards in nine plays, capped by Fremstad’s 3-yard TD toss to Ryan Palek.

The Braves went four-and-out on their next series, and the Fishermen basically put the game away with another nine-play, 39-yard scoring drive, with Fremstad diving in from 1 yard.

Banks did not score until a nine-play, 72-yard march late in the fourth quarter.

On the ensuing onside kick, Fremstad fielded the ball on the run, and took it the distance for the final touchdown.

If the power had gone out (it did Thursday night in areas of Clatsop County), “we did actually have a plan to come back tomorrow at 6 p.m. if we lost power,” Rub said. “I’m really glad we did not have to do that.

“Back out at the old stadium, this would have been something in the mud. But it was still pretty fun, even on artificial turf. It was a great night, and a great win for the kids.”

It was also Astoria’s first victory over Banks since 2009.