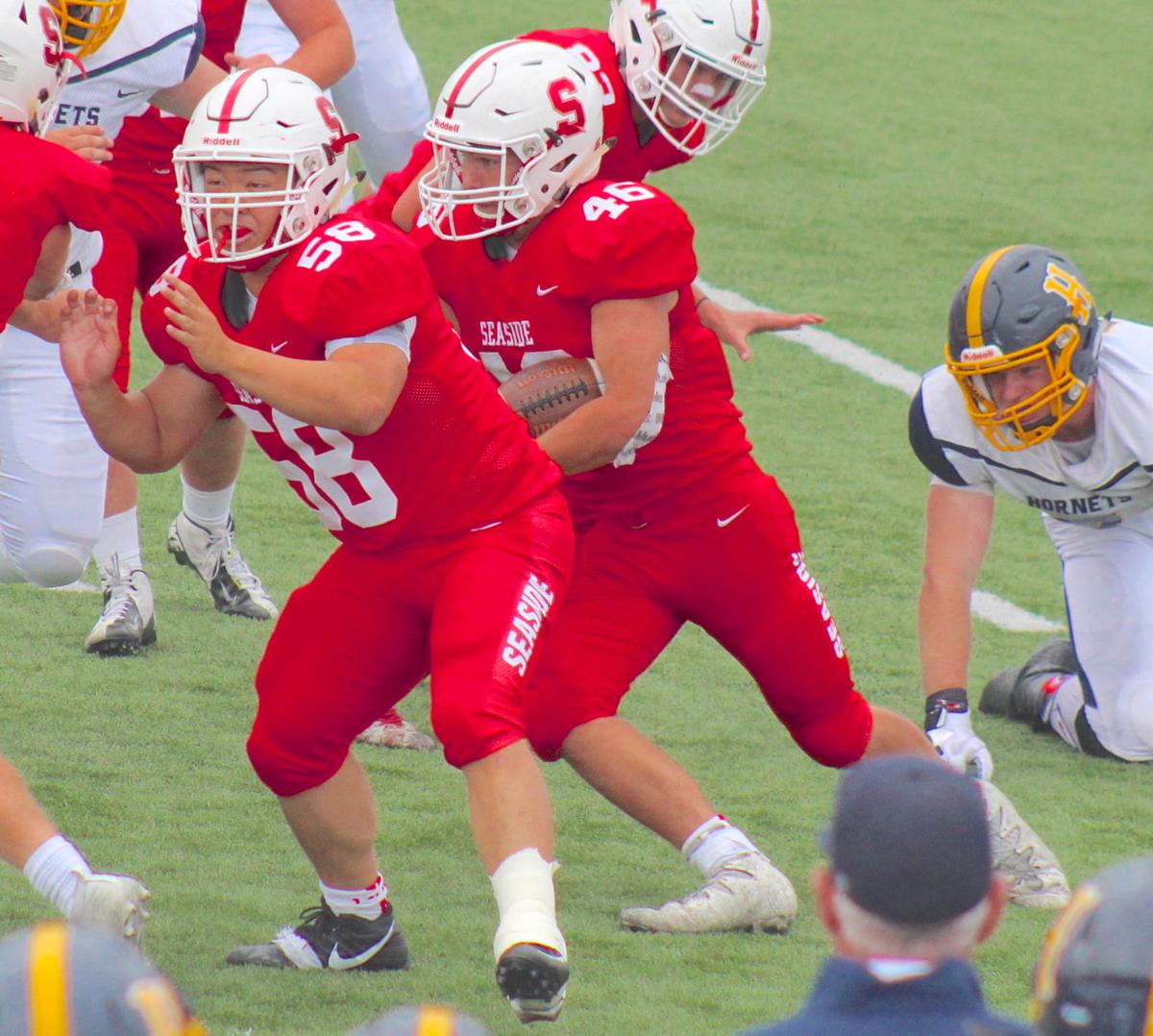 Seaside running back Jake Black (46) follows the blocking of teammate David Toyooka (58) on a first half play in Saturday’s football game. 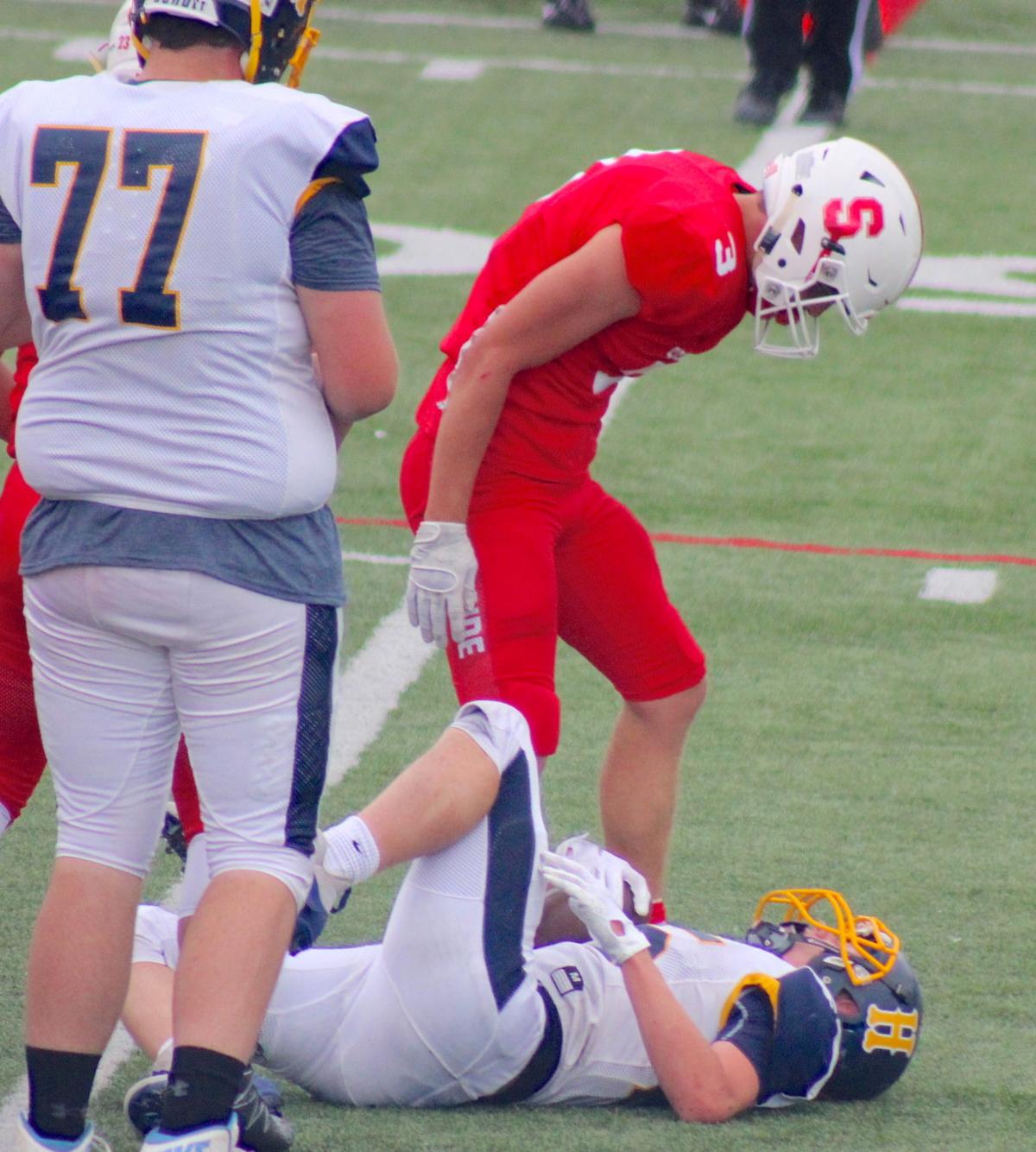 Seaside's Brayden Johnson stands over a Henley ball carrier following a tackle by Johnson in the first quarter. 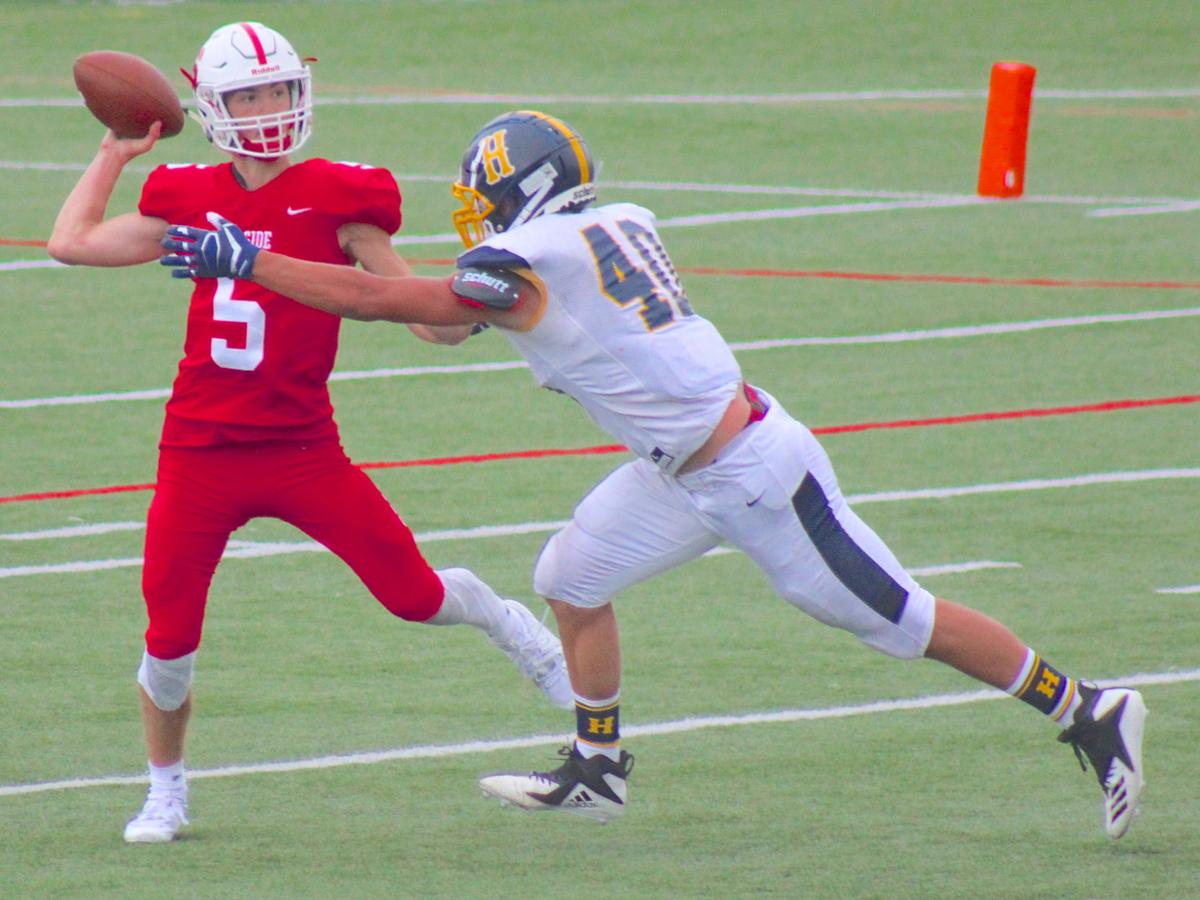 Seaside quarterback Ledger Pugh attempts to get off a pass while Henley's Joe Northcutt applies the defensive pressure. 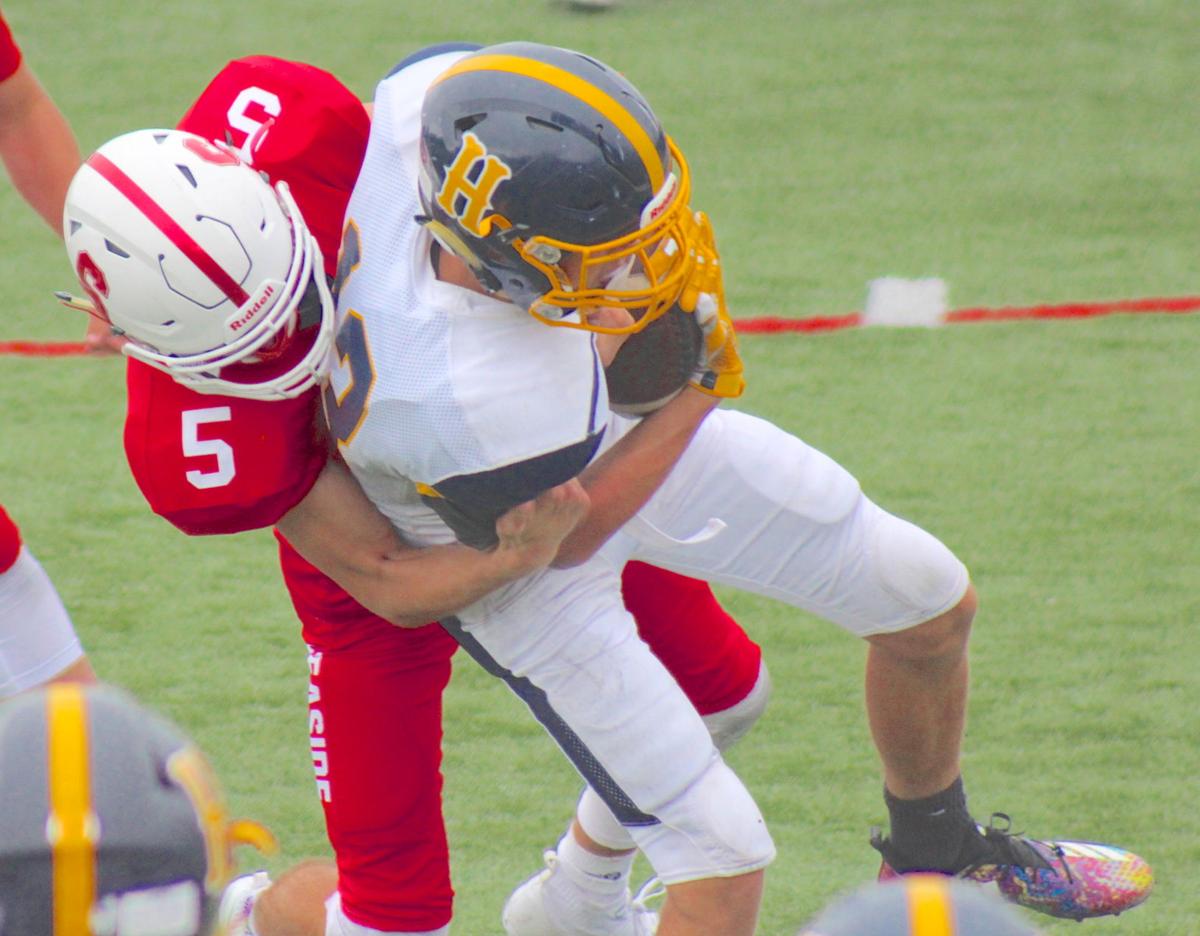 Seaside's Ledger Pugh (5) tackles Sam Dixon of Henley near the sideline in the second half of Saturday's game. 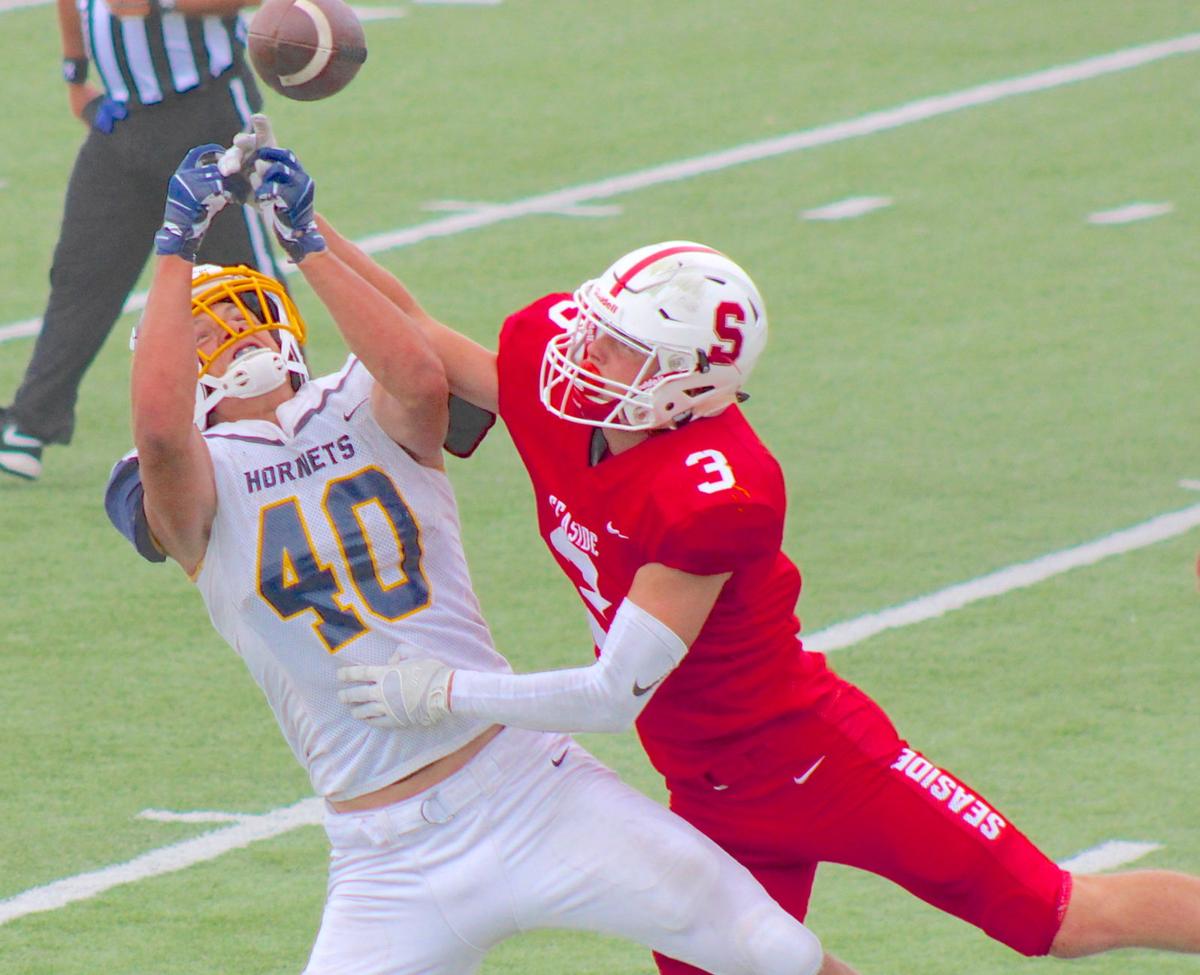 Seaside running back Jake Black (46) follows the blocking of teammate David Toyooka (58) on a first half play in Saturday’s football game.

Seaside's Brayden Johnson stands over a Henley ball carrier following a tackle by Johnson in the first quarter.

Seaside quarterback Ledger Pugh attempts to get off a pass while Henley's Joe Northcutt applies the defensive pressure.

Seaside's Ledger Pugh (5) tackles Sam Dixon of Henley near the sideline in the second half of Saturday's game.

SEASIDE — The Shocker of the Weekend in Oregon 4A football was a Saturday afternoon special at Broadway Field in Seaside.

Making their third trip to Seaside in three years, the Henley Hornets — who lost to the Gulls 55-13 just over a year ago — overcame a 7-0 deficit to post a 14-7 win over Seaside in the 2019 season opener for both teams.

The Gulls were ranked seventh in a preseason coaches poll, while Henley was unranked and coming off a 2-7 season.

The two teams got defensive in Saturday’s battle at Broadway, where the Hornets and Gulls combined for just four first downs over the second and third quarters.

Henley had only five first downs through three quarters (and finished with eight), while Seaside had no first downs in the second period and just one in the third — which set up its only score of the game.

Ledger Pugh’s 45-yard pass to Brayden Johnson gave the Gulls a first-and-goal at the 2-yard line midway through the third quarter, and Jake Black scored from there on the very next play. Kaleb Bartel added the extra point for a seemingly safe 7-0 lead.

But after a completely scoreless first half, the Hornets scored on the very next play from scrimmage, a 62-yard pass from Tim Orr to Braden Lawrie.

The Henley defense answered the call from there, forcing a pair of three-and-out drives on Seaside’s next two possessions.

Henley took the lead on the first play of the fourth quarter, when Orr hit Sam Dixon down the right sideline for a 55-yard touchdown play.

Numerous presnap penalties cost the Gulls yardage on several drives, including Seaside’s first possession of the fourth quarter, which resulted in a missed field goal.

The Hornets managed to take time off the clock with their next drive, giving Seaside just one more offensive possession in the final quarter.

The Gulls reached their own 46-yard line, but could get no further, as the Henley defense stopped Seaside on a fourth-and-10 with a minute remaining.

Henley’s top ball carrier in the first half (13 attempts, 62 yards) and emotional leader, Cameron O’Connor, suffered a concussion on the opening kickoff of the second half and missed the remainder of the game.

Orr — who had just 14 yards passing in the first half (including one to himself for two yards) — was 6-for-8 in the second half for 163 yards. Dixon caught four for 95 as the game’s leading receiver.

Black led the Gulls with 78 yards rushing on 20 carries, while Johnson caught three passes for 87 yards.

Outside of their two losses to Banks last season, the Gulls’ last loss to a team other than the Braves was a 43-39 loss to Henley in the first round of the 2017 state playoffs, also at Broadway Field.