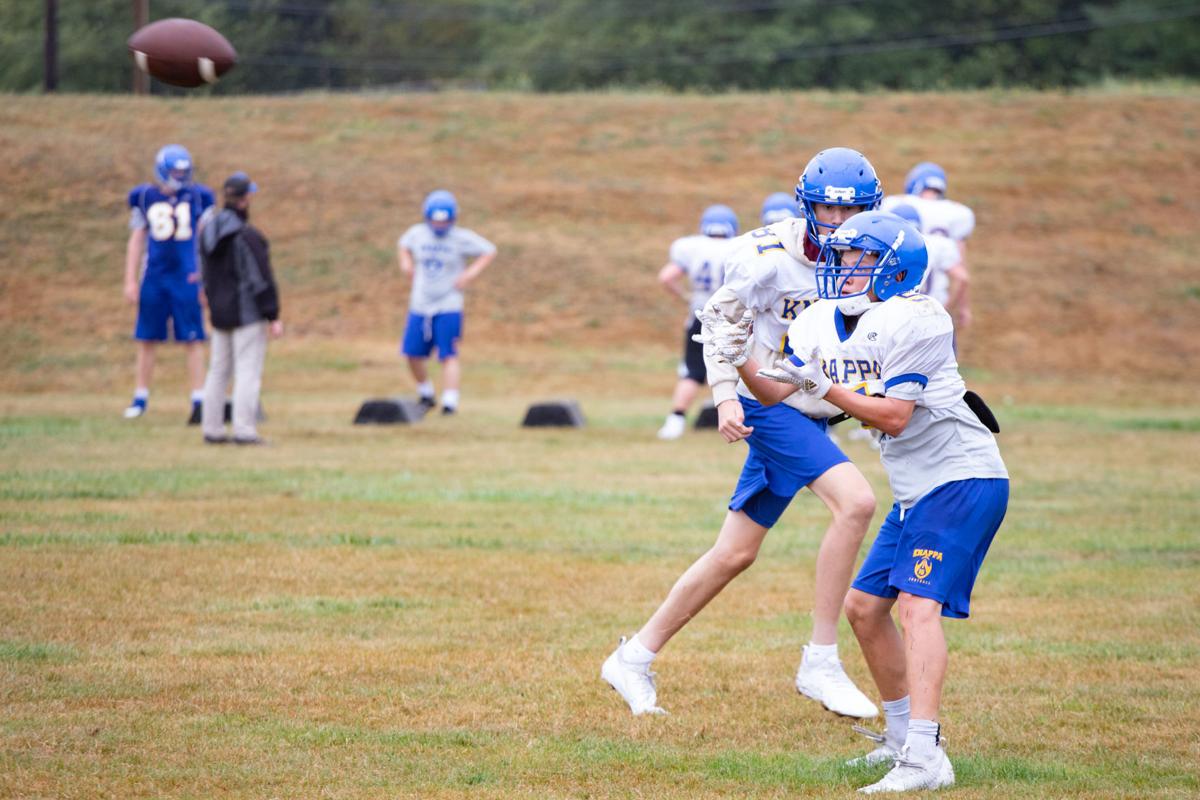 A player prepares to receive a pass during practice. 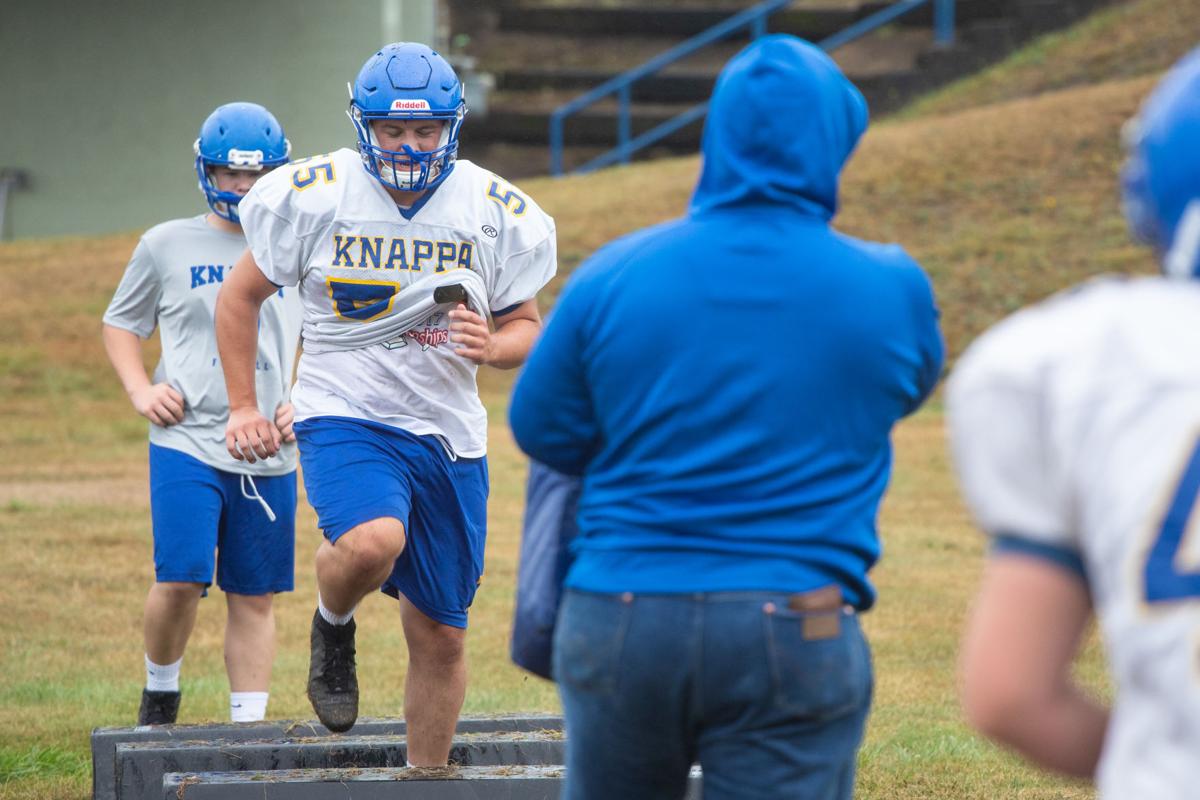 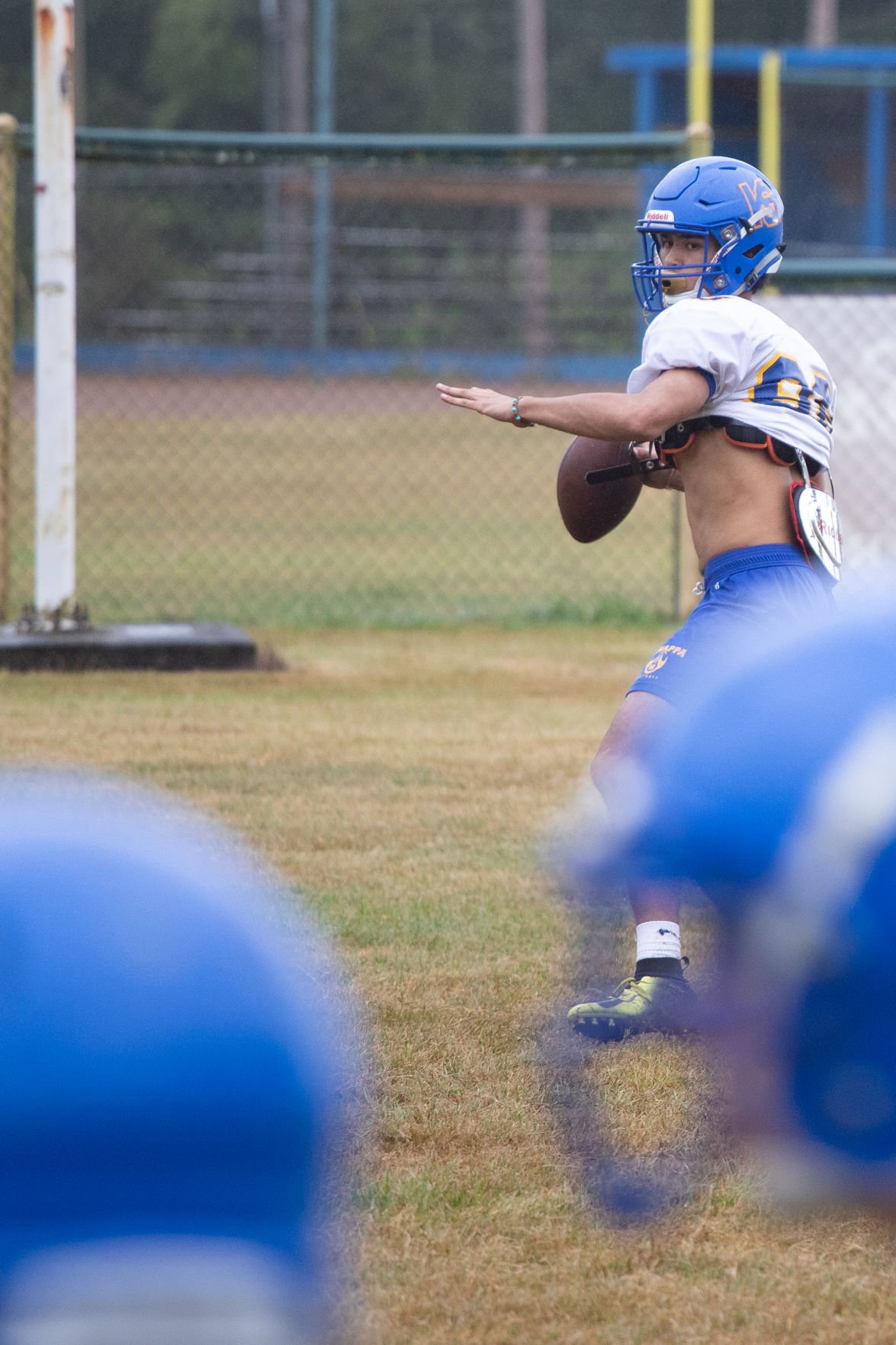 A quarterback sets up to pass while doing offensive drills.

A player prepares to receive a pass during practice.

A quarterback sets up to pass while doing offensive drills.

The 2018 season was just “one of those seasons” for the Knappa football team.

A great league record for the Loggers — 5-1 — but some late-season injuries and their only league loss proved costly.

The Neah-Kah-Nie Pirates scored their first win over the Loggers since 2002.

It turned out to be Knappa's only league defeat of the season, but it was enough. The Pirates went on to capture a rare league title, and eventually lost in the state quarterfinals.

This year, a fresh start. And it could be a Clatsop Clash showdown for the NWL title. The Warrenton Warriors are back for their second year at the 2A level, and they're stocked full of good athletes.

Upriver, the Loggers have reloaded, and are ready to take back what's usually theirs. Knappa has won multiple league titles and missed the state playoffs only once since 2007, advancing to the semifinals five times.

They're ready to make another deep playoff run in 2019, as all-league players return at 14 positions, including three receivers and three linemen.

A baseball injury suffered by senior Eli Takalo last spring has left a question mark at quarterback, but all systems are go everywhere else.

“We are looking forward to being competitive,” said coach Aaron Barendse, entering his eighth year. “We will look a little different. Trying to figure a few things out with the unfortunate injury to Eli. He was really the heart and soul to the team last year and a huge blessing at QB. He's been showing up to weights with the guys and came to kids' camp to help. He's just a solid guy with great leadership skills. He's a guy I want on my sideline no matter what his role is.”

So instead, “We have a few kids that are good enough athletes to fill this position. The challenge will be moving parts to fill the other spots. Our line should be a strong point.

Ryson Patterson (sidelined the second half of the season with an injury) will be back and is very talented.

“Dillon Anderson is a big boy with a ton of potential. He's going to be a solid addition. Andrew Pedersen played center and rotated on defense. He's an undersized line guy that makes up for it with grit and determination.

“Kaleb Roe was a big surprise last season. He is very smart and plays tough. He's a very good D-line guy that will help on 'O' as well.

“We have some younger kids that will get in the mix to give guys a break here and there. I'm looking forward to seeing our big boys work this year.”

The skill position players, meanwhile, “are just that, very skilled,” he said. “We have size, speed and good experience. Kanai Philip is an all-state player that's probably at the top of the list in the state for 2A receivers. He's been working his tail off in the weight room.

“Cameron Miethe will see a lot of time at running back. He'll play defensive back and outside backer as well.”

“Joe Ramvick is a very fast, athletic guy that has an unbelievable motor. Joe is an all-state caliber player on defense as a linebacker. He just flat flys around.

“Spencer Teague is an all-league player at middle linebacker and has great hands and speed. Very solid player. Devin Hoover is a long kid with good hands and good speed. He's a good safety as well as receiver.

“Tanner Jackson is just a sophomore, but has put a lot of time in this offseason and has shown huge strides. He'll be in the mixed rotation at receiver as well as defensive back.”

Johnny Lenhard “has turned into a bigger, physical guy. Last year as a freshman he stepped up and played O-line in our playoff game to help the team, as we had four starters out with injury. Johnny is a linebacker that loves to be physical.”

And “Mark Miller will see some time in multiple roles. Good athlete that has a big upside. We have some younger skill kids that will get into the mix and help us out for sure.”

Prediction: Doesn't matter who wins the NWL title — expect both Knappa and Warrenton to make deep runs into the state playoffs. A state championship match between the Loggers and Warriors would be a dream Clatsop Clash.