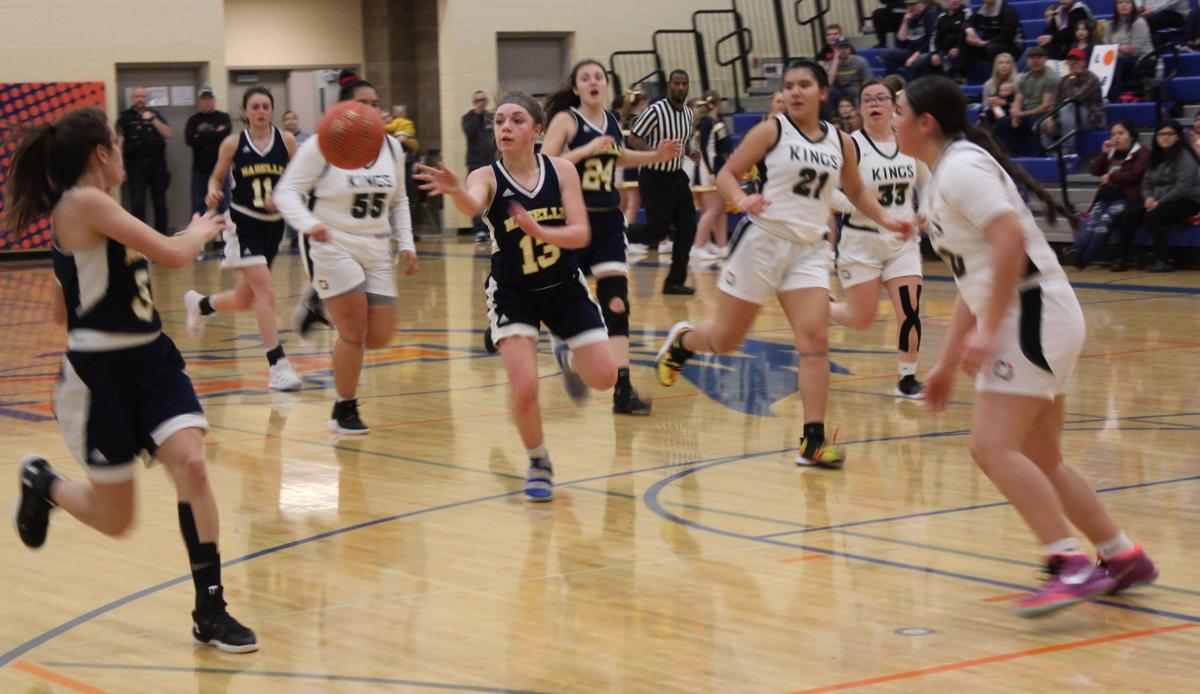 Bella Colombo (13) was joint high scorer with 13 and a key on-court leader of her team as Naselle defeated the Muckleshoot Tribal School Friday 43-39 to advance to the WIAA state championships. Here the freshman passes to sophomore Echo Cenci (3). Behind them are freshmen Lauren Katyrniuk (11), who also scored 13 points, and Delaney Kragerud (24). 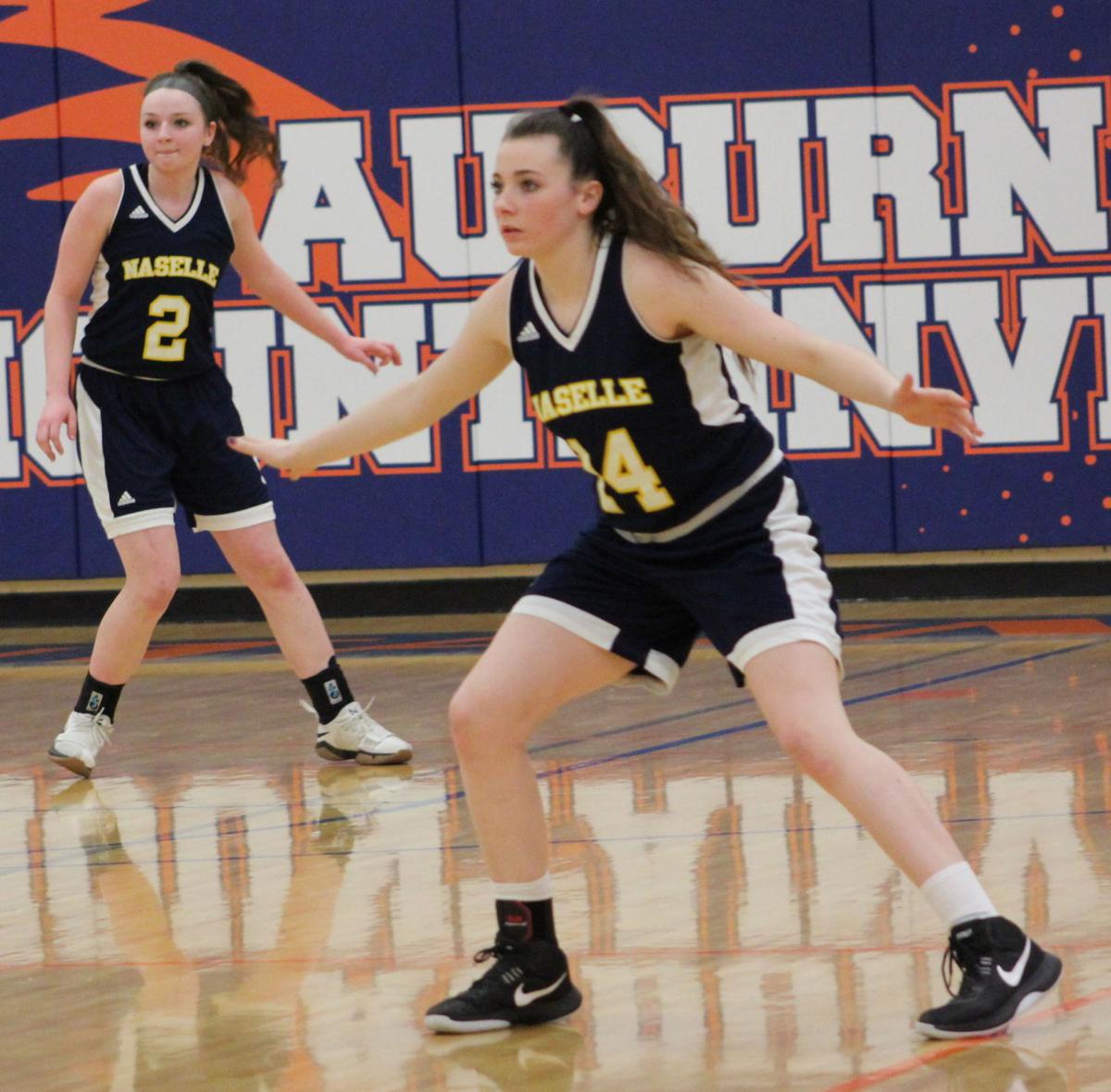 Bella Colombo (13) was joint high scorer with 13 and a key on-court leader of her team as Naselle defeated the Muckleshoot Tribal School Friday 43-39 to advance to the WIAA state championships. Here the freshman passes to sophomore Echo Cenci (3). Behind them are freshmen Lauren Katyrniuk (11), who also scored 13 points, and Delaney Kragerud (24).

AUBURN, Wash. — The Naselle girls basketball team is going to state, but only after some nail-biting final minutes in a loser-out playoff Friday.

The Comets defeated Muckleshoot Tribal School 43-39 to advance to the WIAA tournament in Spokane.

The game appeared easily in Naselle’s grasp through the early stages, although the Kings showed considerable skill in stealing the ball.

Naselle’s team has had mixed fortunes throughout the season, led by lone senior Jackie Steenerson. With junior Hollie Haataia sidelined with an injured knee, the rest of the team consists of sophomores and freshmen.

The freshmen led as the Comets built a 17-11 lead in the first quarter, buoyed by good passing between Kaylin Shrives and Bella Colombo and a three-pointer at the buzzer by Lauren Katyrniuk.

Sophomores Peyton Dalton and Echo Cenci demonstrated considerable fire battling for possession throughout the contest, buffeted by larger opponents. But Muckleshoot’s composed senior Kalea Lezard repeatedly stole the ball and set up her teammates in scoring positions all evening.

Naselle’s half-time lead was 28-17, with Shrives dribbling to the hoop to score despite the attentions of several opponents and Colombo scoring from close in after athletically rescuing a ball that appeared to be heading out of bounds.

The second half saw the Kings come out of the blocks to reduce the deficit. Although it was a neutral gym, Muckleshoot is a 20-minute drive away and its fans all around the court raised the noise and intensity level when the score narrowed to 33-30.

As the fourth quarter began, the Kings tied the game with a three-pointer then gave up a basket to a determined Dalton who scored from far range with a shot that was all swish. A Muckleshoot free throw brought the scores closer and the Auburn team inched ahead 36-35 for the first time with 5:13 remaining.

Two free throws enhanced the Kings’ lead before Shrives scored and Dalton went to the line to knot the score at 38-38.

There was a frantic quality to the final three minutes as the Kings scored and missed free throws. Colombo coolly shot a three to give the Comets the lead, endured some awkward moments when possession changed hands twice, then raced down the court for a layup that expanded the margin to four points as the clock ticked down.

The eruption as the buzzer sounded set off a Kodak moment as coaches, managers and players engulfed each other in a bench-clearing hug, broad grins mixed with tears.

Steenerson’s command in the thick of the action, plus similar exertion by freshman Delaney Kragerud, provided significant opportunities for their teammates. Colombo and Katyrniuk were Comet high scorers with 13 each.

A relieved head coach Rose Nisbet commended her team for its endurance. But she noted they’ll have to work on protecting the ball. “We had a hard time being strong with the ball, but other than that the girls followed the game plan,” she said.

Games begin in Spokane Thursday. Last year, the Comets advanced to state, but were eliminated in the first round by Mount Vernon Christian 29-19.

The Comet boys qualified for state earlier and also begin their campaign Thursday.