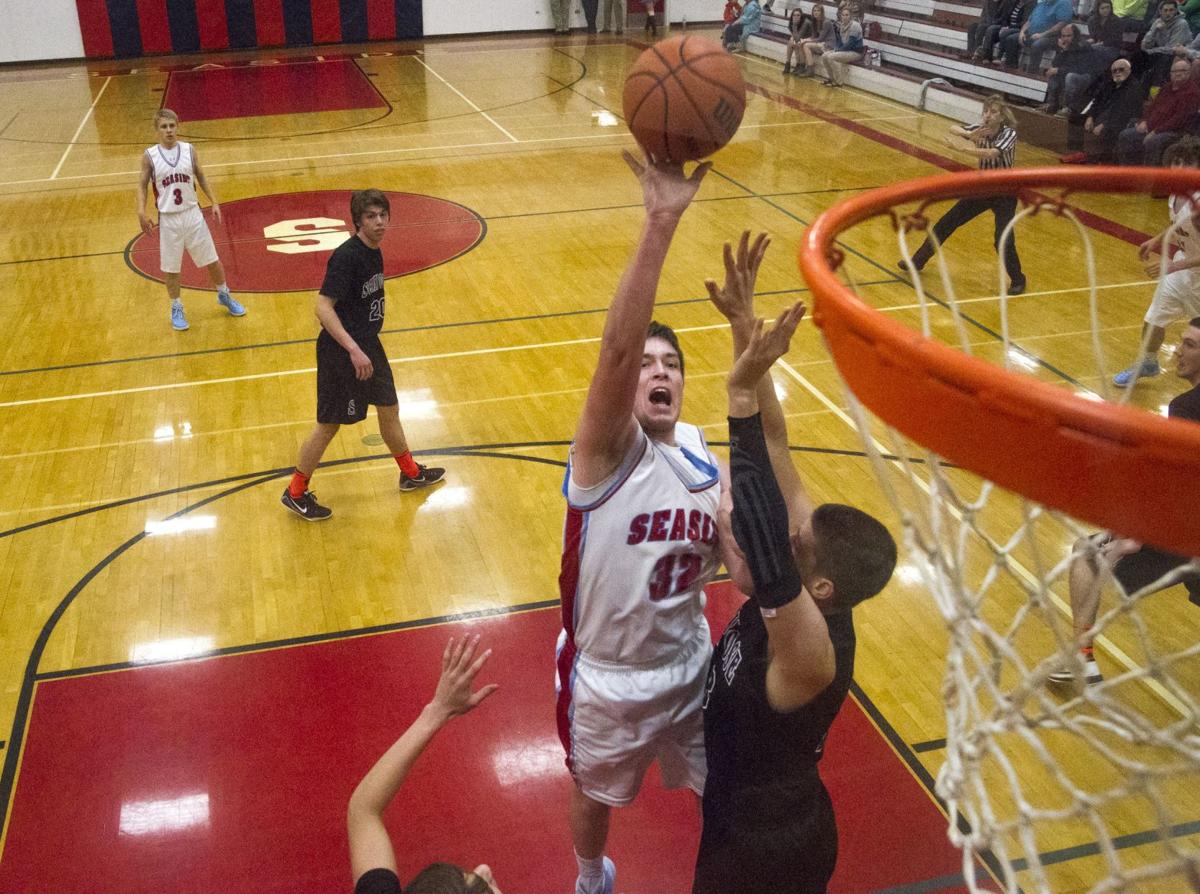 Seaside's Austin Eagon, No. 32, puts up a shot over Scappoose's Ethan Marcantonio, No. 33, during their basketball game at Seaside Tuesday. 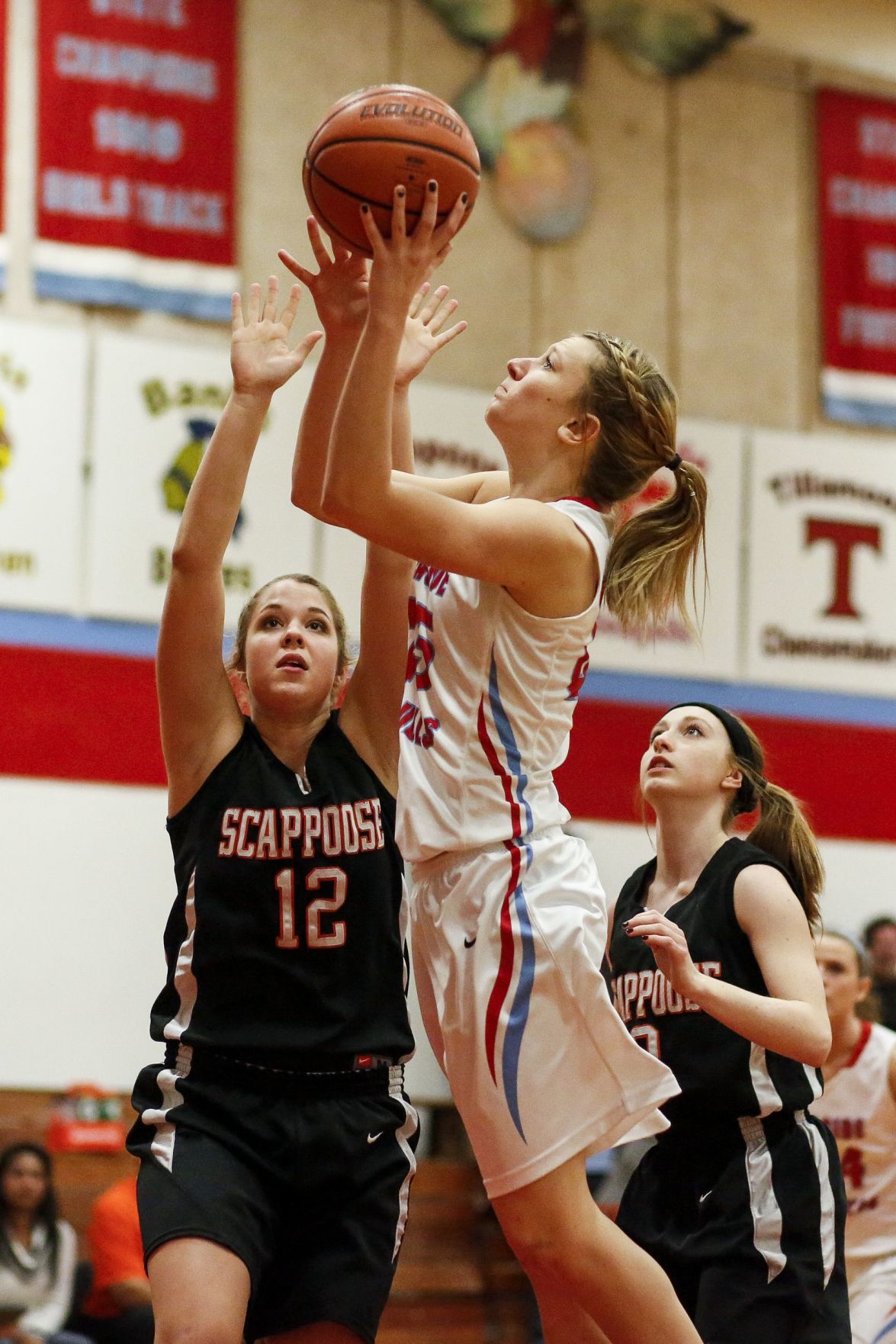 Seaside's Maddi Utti, No. 25, shoots over Scappoose's Kendal Bailey, No. 12, during their basketball game at Seaside Tuesday. 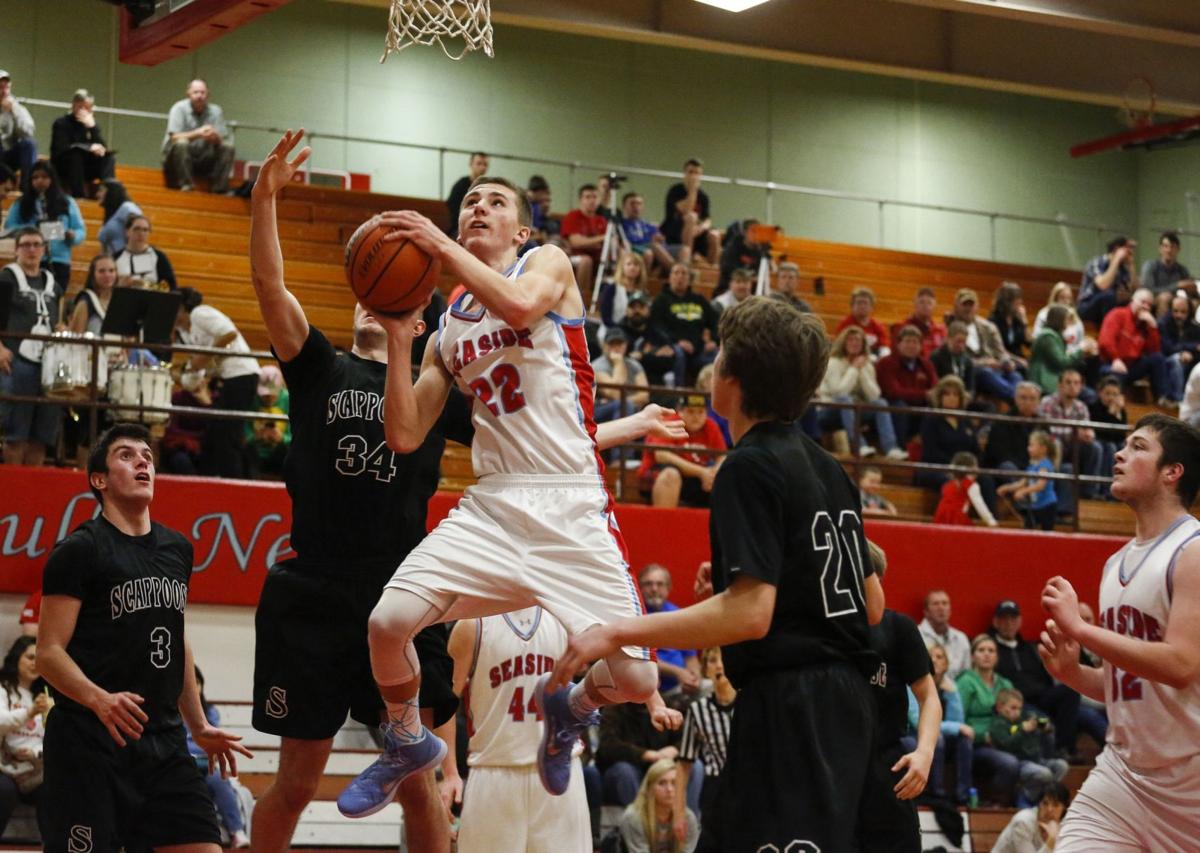 Seaside's Jaxson Smith, No. 22, drives to the basket against Scappoose's Chase Johnson, No. 34. 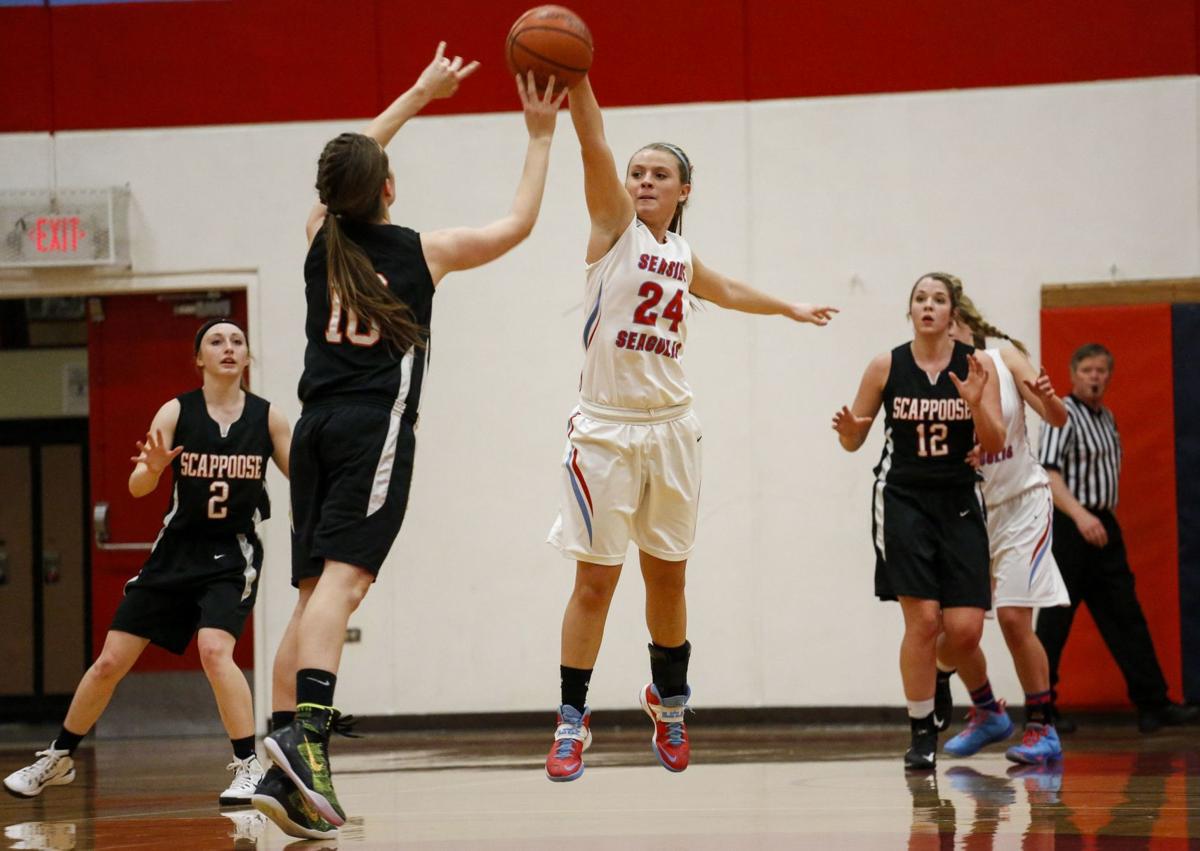 Seaside's Whitney Westerholm, No. 24, blocks a shot by Scappoose's Bella Sykes, No. 10. 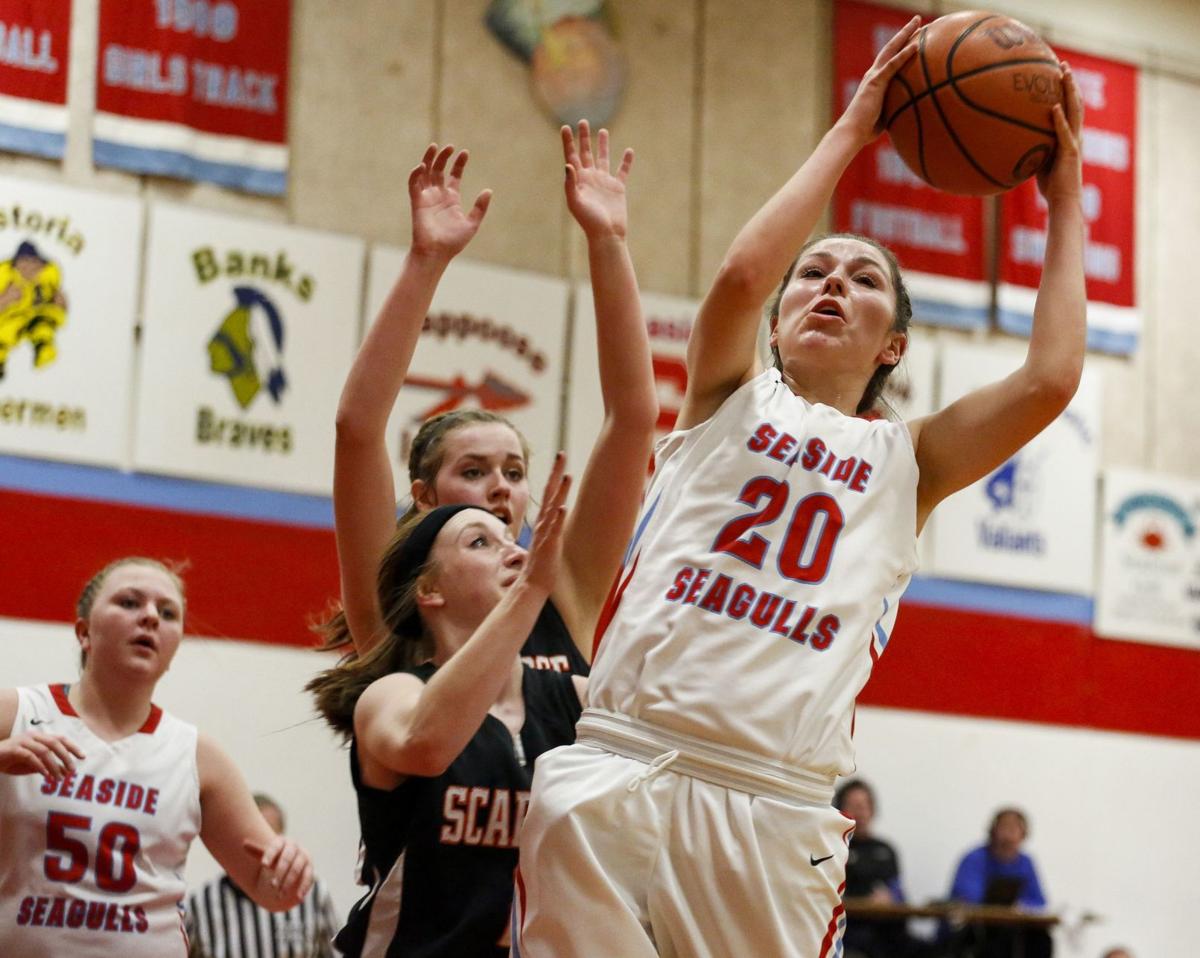 Seaside's Sydney Villegas, No. 20, pulls down a rebound in the first half.

Seaside's Austin Eagon, No. 32, puts up a shot over Scappoose's Ethan Marcantonio, No. 33, during their basketball game at Seaside Tuesday.

Seaside's Maddi Utti, No. 25, shoots over Scappoose's Kendal Bailey, No. 12, during their basketball game at Seaside Tuesday.

Seaside's Jaxson Smith, No. 22, drives to the basket against Scappoose's Chase Johnson, No. 34.

Seaside's Whitney Westerholm, No. 24, blocks a shot by Scappoose's Bella Sykes, No. 10.

Seaside's Sydney Villegas, No. 20, pulls down a rebound in the first half.

SEASIDE — The Seaside Gulls went 1-for-17 from the field in the second half of Tuesday night’s Cowapa League opener with Scappoose … and still won, 53-40, as the Gulls cruised past the Indians in a boys basketball league opener at the Gulls’ Nest.

The Gulls made their statement in the first quarter, when sophomore Jackson Januik drained four 3-pointers, helping Seaside to an eventual 27-9 lead in the early seconds of the second period.

“That was about as good a first quarter as you can play,” said Seaside coach Bill Westerholm. “We just followed through on what we had talked about doing. We wanted to keep the ball in Jackson’s hands — you can’t really go wrong if you do that.”

Scappoose had defeated Seaside 72-62 at the Sisters Tournament Dec. 30, a game in which Scappoose junior Brennen McNabb scored 19 points.

“Hunter Thompson did an excellent job on McNabb,” Westerholm said. “Michael Lewis was also all over the place defensively. We were just an offensive team the first couple weeks, and that just doesn’t cut it. We’ve put a lot of time and work in on our defense over the last four games.”

Januik finished with 22 points, with Jaxson Smith adding 10. The game featured 50 attempted free throws, with the Gulls hitting 19-of-25.

Astoria’s Derek Jarrett scored on a little roll to the hoop with 4.9 seconds left Tuesday night, and that was enough to give the Fishermen a 36-34 win over Banks at the Brick House.

The dramatic win also gave Kevin Goin a victory in his first Cowapa League game as the Astoria boys basketball coach, as the Fishermen improve to 7-8 overall.

“We’re still struggling to score a little, but I like the job we’re doing defensively,” Goin said following the win. “We’re not scoring a lot of points, but we are getting better offensively. Tucker Scroup hit a couple three’s tonight, so it’s good to see him getting more aggressive.”

Scroup’s 3-pointers came in the second half, and may have helped open a lane for Jarrett on his game-winning hoop.

The Braves were looking for Kyle Strange or Scroup to possibly take the final shot, which left an opening for Jarrett to score on a roll to the hoop.

Jarrett led all scorers with 12 points, with Strange tossing in eight. The Braves outscored Astoria 10-4 in the third quarter, and took a 29-23 lead into the fourth, where the Fishermen went on a 13-5 run.

PORTLAND — The longest win streak in Northwest League boys basketball belongs to the Knappa Loggers, who won their fourth in a row Tuesday night, 65-46, at City Christian.

Tyson Burnard scored 23 of his season-high 35 points in the second half, and was 13-of-15 at the free throw line. Andy Miller added 15 points and Justin Dragoo added seven points and 14 rebounds for the Loggers, 12-4 overall.

FALLS CITY — After opening the season with 14 straight losses, the Jewell boys basketball team has won two in a row, the latest victory a 38-32 win at Falls City Tuesday.

Rylan Murry scored 12 points and pulled down 13 rebounds to lead the Blue Jays, who outscored Falls City 14-4 in the second quarter to take a commanding 20-8 halftime lead.

Last Friday, Jewell scored a 55-38 win over Oregon School for the Deaf, as Murry scored 16 points, followed by Victor Berg with 13 and Ben Stahly with 11.

Banks went on a 12-2 run in the fourth quarter, and the Braves spoiled Astoria’s Cowapa League girls basketball opener at the Brick House Tuesday night, 44-26.

Ariel Slifka scored 14 points to lead the Braves, who outscored the Lady Fishermen in every quarter.

SEASIDE — Nothing has changed in Cowapa League girls basketball since the end of the 2013-14 season.

The Seaside girls basketball team went through league play unchallenged last year, are the Lady Gulls are almost certain to run the table again, as they showed Tuesday night.

By the time the Scappoose Indians scored their first points (a Sara Tinning 3-pointer with 5:10 left in the second quarter), the Gulls had already forced 18 Scappoose turnovers and scored 18 points of their own, on their way to an easy 47-19 win.

With a light pressure defense, Seaside forced 27 turnovers in the first half, 44 turnovers for the game.

The Gulls also jumped out to their usual 18-0 lead, behind baskets from Sydney Villegas, Maddi Utti and Haylee Dundas.

Utti had three straight scores off steals late in the first half for a 26-3 halftime lead.

Dundas drained three 3-pointers in the second half, as she and Utti both finished with 15 points.

Utti dished out five assists, and Villegas added 13 points with seven rebounds for the Gulls, who play at Banks Friday.

PORTLAND — City Christian had four players in double figures, and built an 18-point halftime lead on its way to a 64-35 win over Knappa Tuesday night, in Northwest League girls basketball.

Piper Lewellen and Felicia Vong had 15 points apiece for the Lions, followed by Susie Traver with 12.

FALLS CITY — Falls City held Jewell to just five points in the second half Tuesday night, on its way to a 38-20 win over the Lady Jays in a Casco League girls basketball game.

Gabi Morales scored 13 points to lead Jewell, which was outscored 18-6 in a decisive second quarter.

Emma Guillen had six rebounds off the bench.