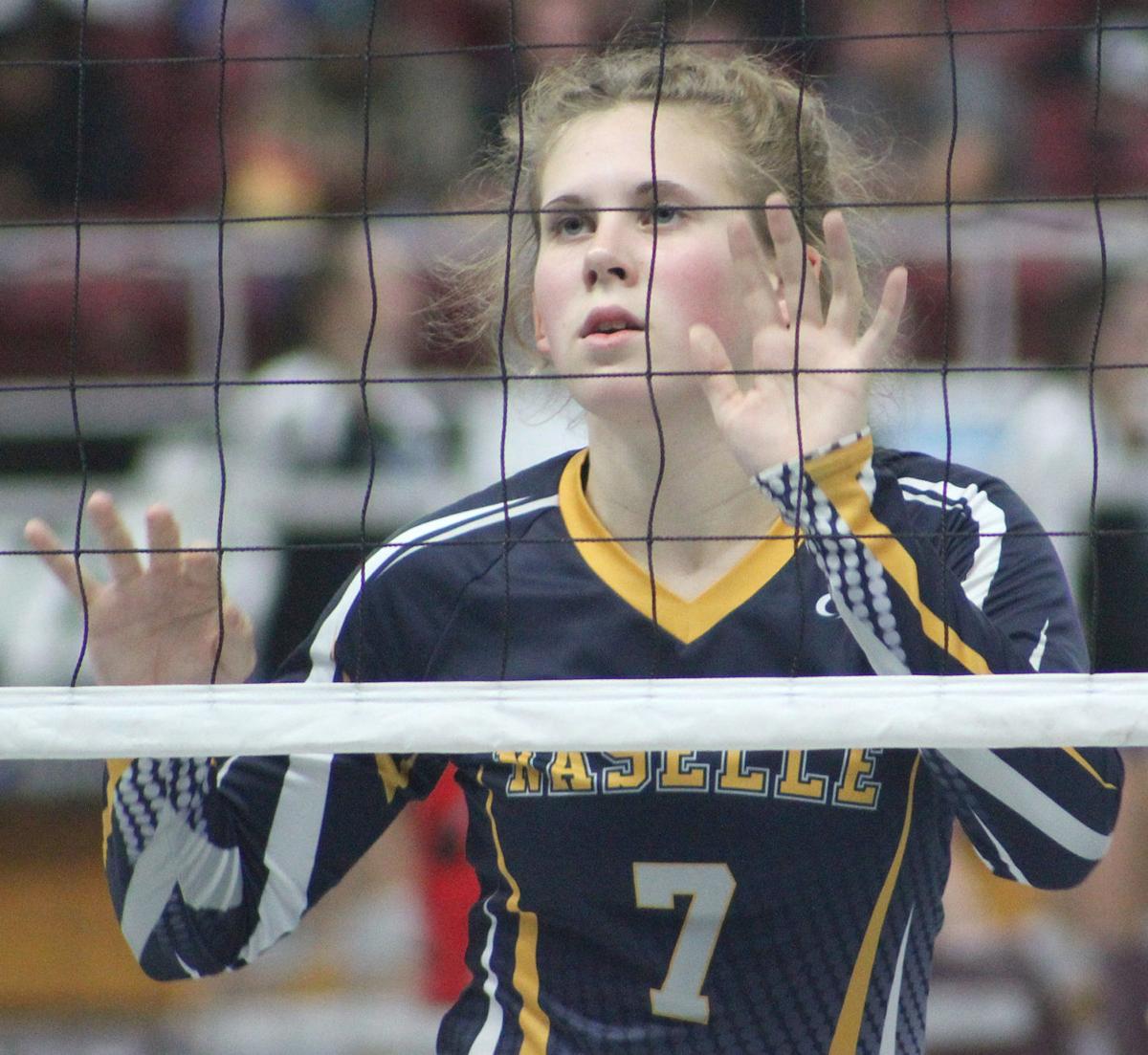 Co-captain Kendra Leeland directed the Comets' players around the court during every game this season. She, co-captain Taylor Eaton, Haley Footh and Emma Fauver played their last two games in a Naselle volleyball uniform Friday. 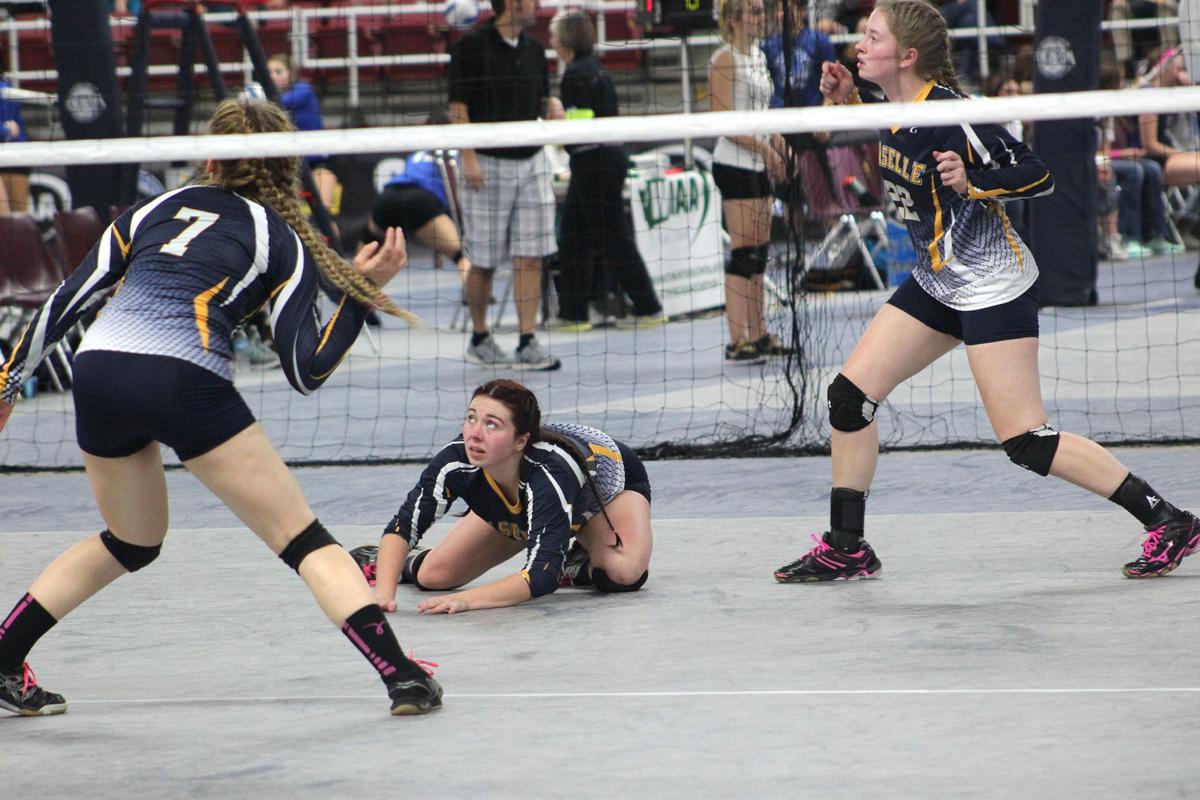 Haley Footh picks herself up after diving for the ball during Naselle's second game at the state volleyball tournament. In the action are fellow senior Kendra Leeland (7), left, and junior Kyryn Jacot (22). 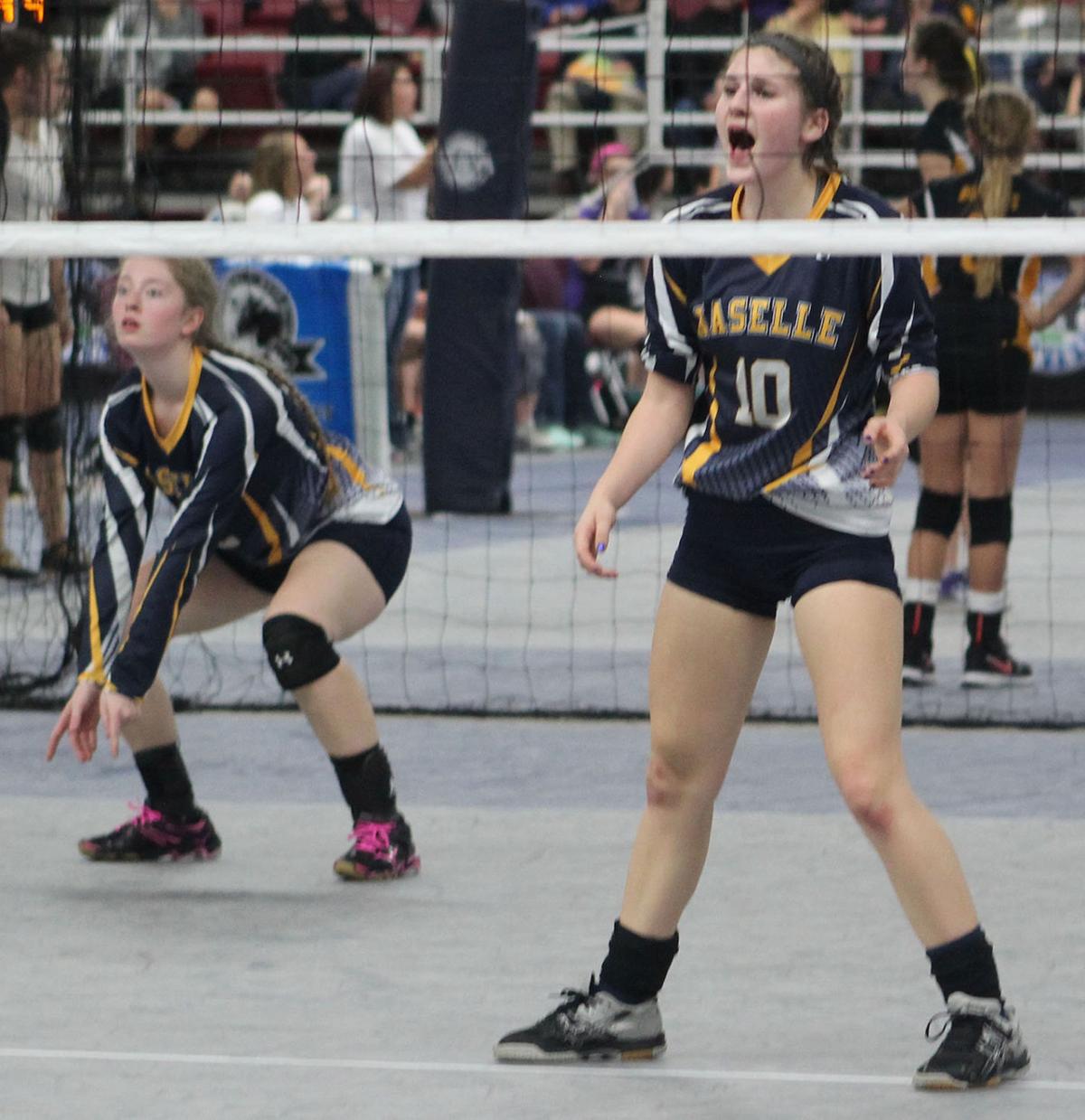 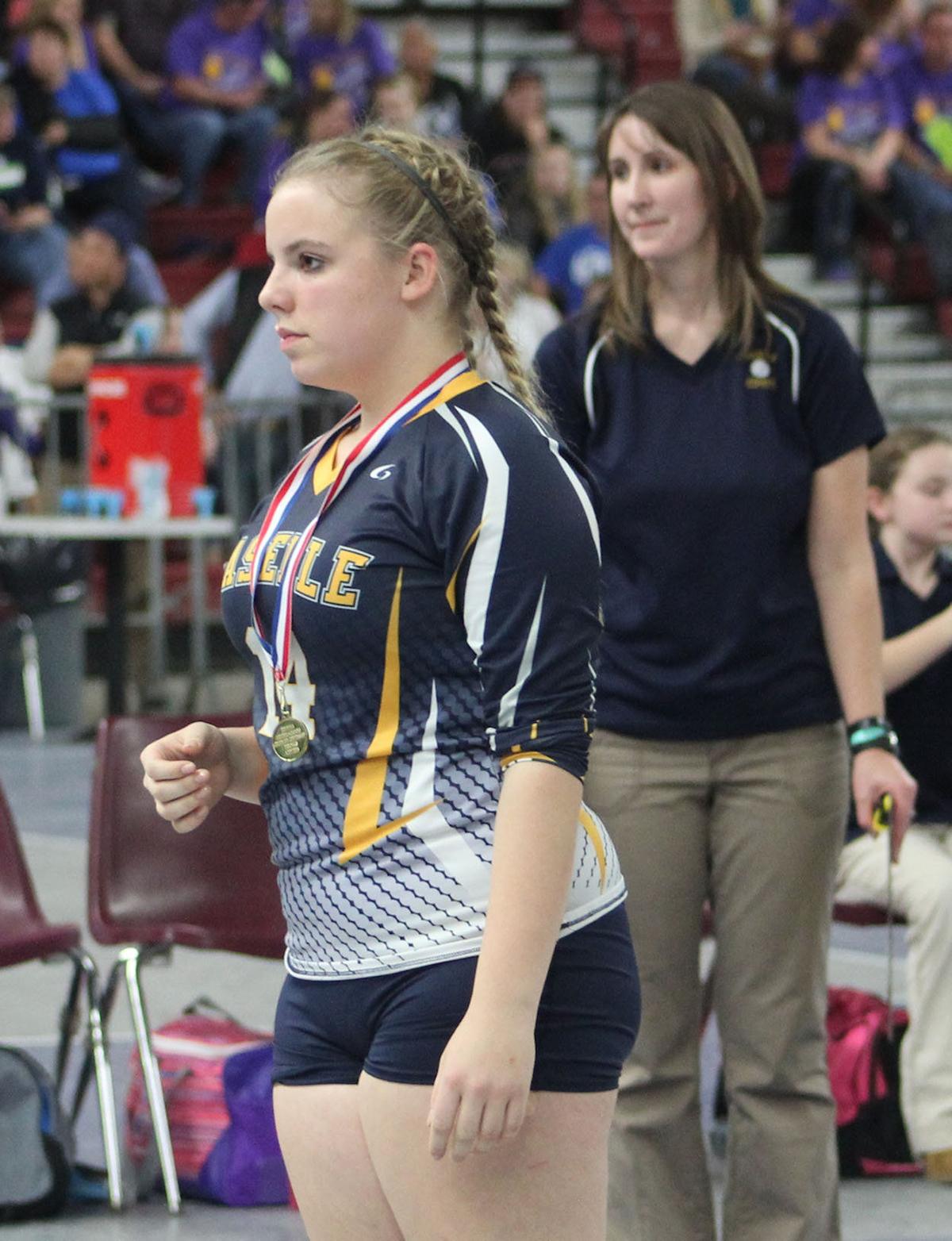 Co-captain Kendra Leeland directed the Comets' players around the court during every game this season. She, co-captain Taylor Eaton, Haley Footh and Emma Fauver played their last two games in a Naselle volleyball uniform Friday.

Haley Footh picks herself up after diving for the ball during Naselle's second game at the state volleyball tournament. In the action are fellow senior Kendra Leeland (7), left, and junior Kyryn Jacot (22).

YAKIMA, Wash. — There was no fairytale ending for Naselle volleyball’s stellar season.

The Comets came up against a buzz saw Friday, losing to Oakesdale in the opening round of the WIAA state tournament in three sets. Scores were 25-11, 26-24, 25-10.

Despite a season in which the Naselle won its league and was District IV champions, the team could not replicate the same level of successful play at the Sundome Stadium.

With six matches from three high school tournaments happening simultaneously in the early stages, Naselle played both its games in the center of the arena amid a booming roar of shouts and applause echoing around the dome.

As in prior years, the 1B tournament highlighted strong teams from Eastern Washington. Oakesdale breezed to the final where it defeated Pomeroy, the defending champions 22-25, 25-19, 25-16, 25-22. Since the 1B division was created 10 years ago, the two teams have been champions six times.

In Naselle’s first game, No. 2-ranked Oakesdale established early momentum in the first and third sets and the Comets just couldn’t catch up the lost points.

In the first set, the Nighthawks had 8 points on the board before Naselle senior Kendra Leeland scored with a kill. Junior Kyryn Jacot made a diving dig during one rally, but Naselle still lost the point.

Junior Ellie Chapman made a diving dig and a spectacular point when the ball rolled over the net and hit the court to make it 18-9 to Oakesdale. But the Nighthawks stretched their lead, thanks to some resolute blocking. A good return from senior Haley Footh and a kill by Leeland couldn’t win the set.

In the second set, Amelia Tutu’u tipped the ball over the net to add an early point. Fellow junior Tayler Ford, back from injury, made another clever tip-over to bring the scores closer early on then made a diving dig. Senior Taylor Eaton blocked well at the net and Chapman served two aces which tied the score at 17-17,

Then Eaton set up Tutu’u for a kill. Leeland tied the scores at 22-22 with a block as her grandmother, Kaye Weimer, at courtside, yelled, “One more! One more!”

The set ended 26-24 after long rallies that Naselle lost.

The third saw Oakesdale score nine points before Naselle responded. Tutu’u and Eaton combined well to get a difficult ball back over the net, then Chapman leaped for a decisive kill and punched the air with joy.

The Nighthawks gathered momentum, though, and added to their points. Leeland replied with a kill and a cleverly placed soft shot that hit the floor. Eaton served an ace to bring the Comets up to 10, but it was their last point earned in the first-round game.

Head Coach Kim Eaton was disappointed. “They were not able to show how they are capable of playing,” she said. “We spent a lot of time on our heels playing defense and we didn’t play a lot of our offense.”

The Red Devils took an 11-1 lead in the first set before Naselle came back with solid work at the net by Tutu’u and an ace by Ford. Footh had a kill and an ace to add points and junior Ashley Muessig blasted a ball over the net which Neah Bay could not return. Two kills by Chapman and one full-length diving dig brought the score to 20-18. Naselle added points with Eaton serving an ace. The Comets were briefly ahead, then tied at 24-24 until they lost a long rally then hit a kill attempt into the net.

The Comets led in the early stages of the second set, went behind and caught up, thanks in part to an ace by Jacot. A good combination play between Eaton and Chapman put them ahead 15-16, and the score went back and forth. The Comets’ best play of the tournament was next with Leeland rescuing the ball from the back court to Eaton who set for Tutu’u to hit the ball over to make the score 22-19 in their favor. However, the Red Devils regrouped with some good blocking and a missed Comet serve gave them the set.

The third began promisingly with an ace served by senior Emma Fauver. The teams traded points and the lead all the way up to 18-18 when a couple of Comet players’ returns bounced out. Leeland made a kill to reduce the deficit to 23-21 and Eaton’s next serve earned a point when Neah Bay could not return it. A lost opportunity gave the ball back to the Red Devils for match point and a diving effort by Leeland could not return the ball.

As the winners celebrated, the Naselle bench gathered into a tearful group hug before forming the traditional handshake line.

Afterward, Naselle Coach Eaton told her players to focus on the successful season, rather than the two state losses.

“Their state play was not what we have seen them do — they have played better,” she said. “But they prepared well. . . . They went through league undefeated, and were district champions.

“I am proud of the girls for what they have done as a team for all the season.”

The second loss ended the high school playing careers of four Naselle seniors, Fauver, Footh, and captains Leeland and Taylor Eaton. They have played volleyball together since seventh grade.

“We all worked hard and achieved our goals together,” said Fauver. “We played as a team and as a family.”

Footh agreed. “I am proud of us because we gave our all,” she said. “We are so much more of a team this year than we have ever been before. We really trust our teammates to have our backs as we have their backs.”

Amid the tears and hugs outside the locker room, junior Raja Estes focused on the positive. “We made it to state, we won league and we were district champions,” she said. “We are winners, in my opinion.”

(awarded by the officials):