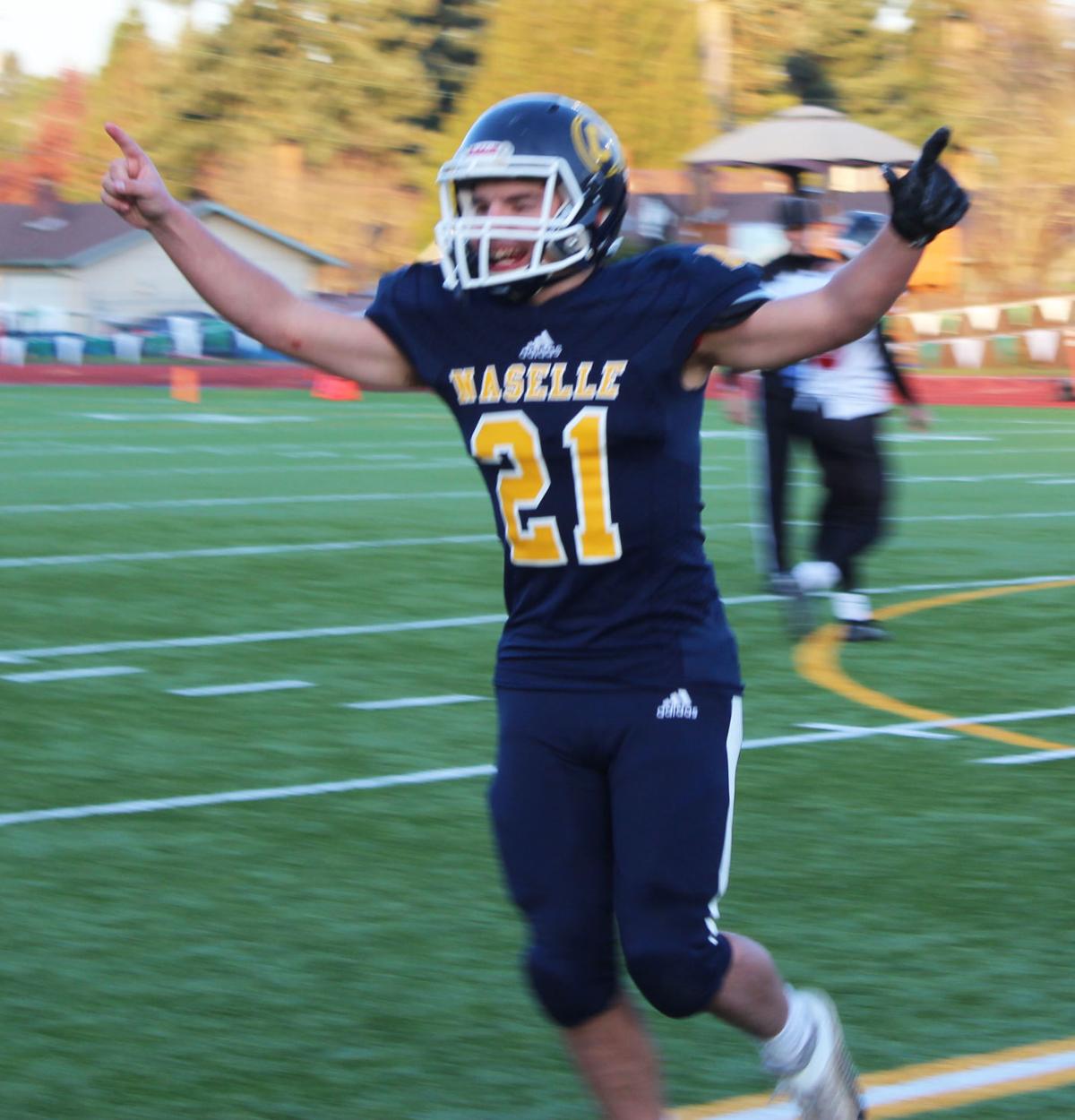 Comet celebrations don’t tend to be too exuberant, but junior Warren Wirkkala signals “No. 1” as he races to join his teammates on the sidelines when the 1B semifinal ended in a Naselle victory. 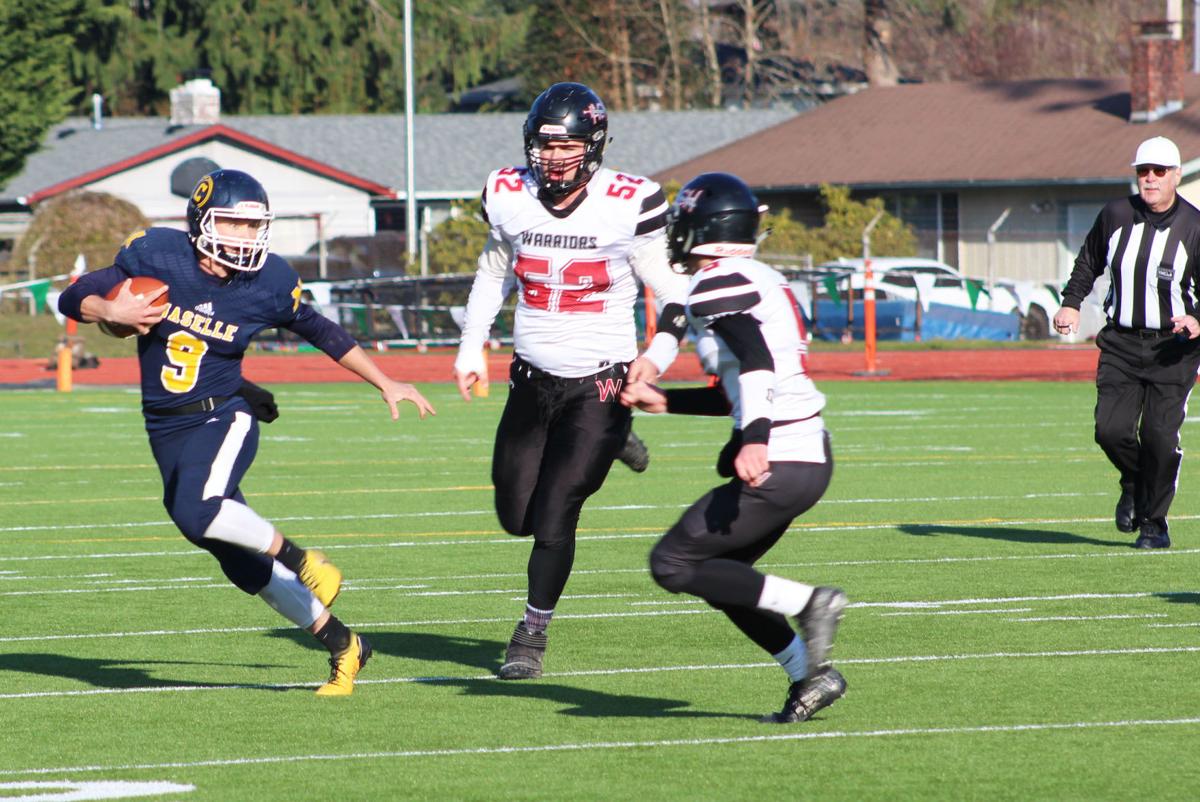 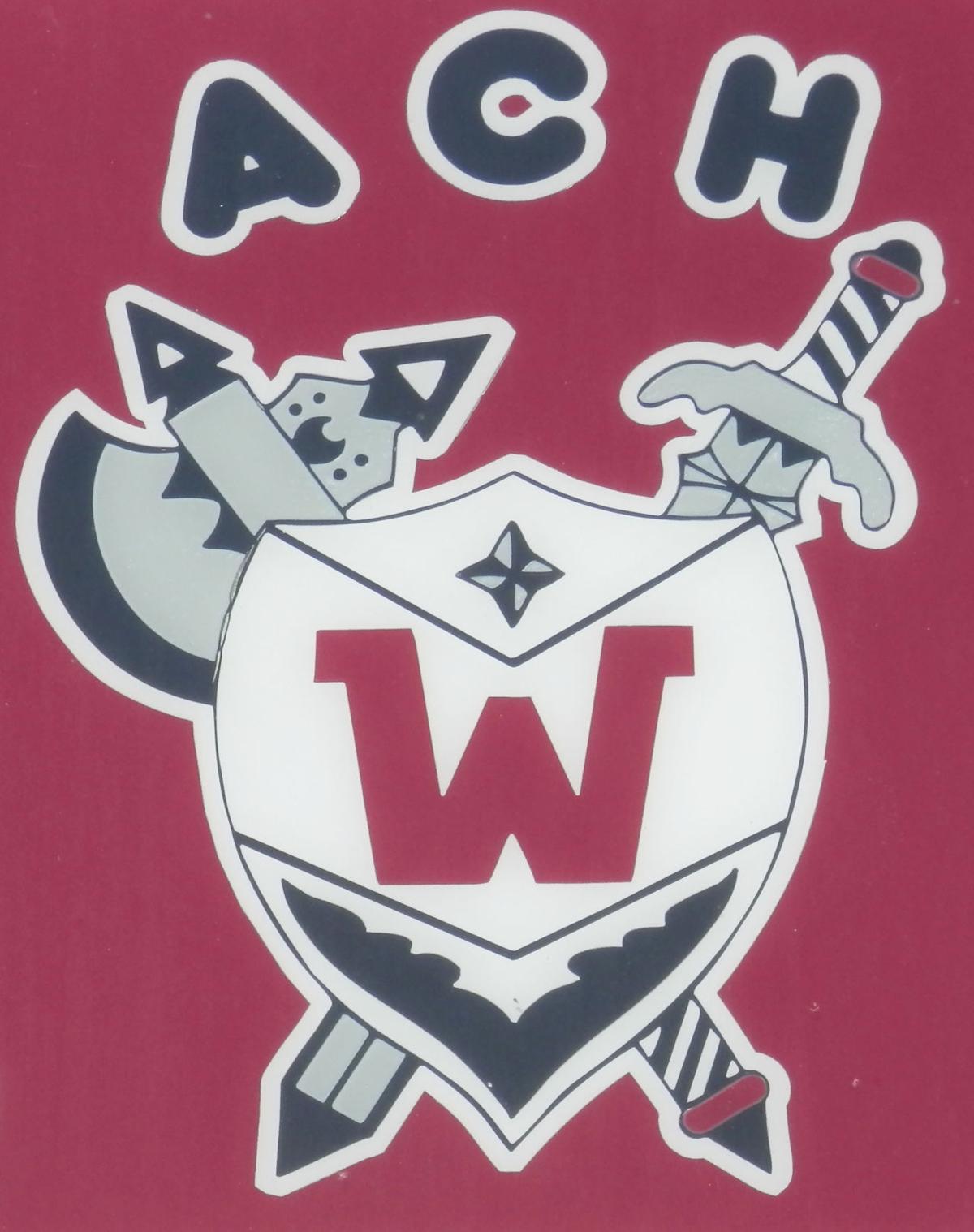 ‘ACH’s emblem is a shield, sword and ax. But Naselle’s Jimmy Strange provided the shield, Ethan Lindstrom the sword and Fa’aoso Tutu’u the ax.’

Comet celebrations don’t tend to be too exuberant, but junior Warren Wirkkala signals “No. 1” as he races to join his teammates on the sidelines when the 1B semifinal ended in a Naselle victory.

‘ACH’s emblem is a shield, sword and ax. But Naselle’s Jimmy Strange provided the shield, Ethan Lindstrom the sword and Fa’aoso Tutu’u the ax.’

TUMWATER, Wash. — To inspire the Warriors in battle, a shield, sword and ax form their emblem.

But head coach Jeff Eaton calls his Comets squad an “Army of 8.”

And Saturday, in the WIAA state semifinal, Naselle defeated its nemesis, Almira-Coulee-Hartline, 70-44 after twice being behind.

They achieved the victory with their own weapons.

• Jimmy Strange proved to be the shield, with a team-high 17 tackles and a touchdown.

• And Fa’aoso Tutu’u was the ax, scoring one conversion run which put Naselle 32-30 ahead at halftime, then four second-half touchdowns that secured the win.

“I am the happiest I have ever been as a coach,” said Eaton after choking up in tears as he thanked his players.

The win ended a jinx. ACH had eliminated Naselle in last year’s semifinal, the prior year’s quarters and again February at state basketball. “This was huge for this group of kids to get up and beat them,” Eaton said.

The win advanced the Comets to the 1B championship game Saturday to face defending champions Odessa. The Tigers beat Entiat 84-20 in the other semifinal and have won every game this season by 54 points or more.

Saturday’s matchup began with senior quarterback Lindstrom shaping to kick long then booting the ball into the ground to catch it on the bounce.

A couple of short runs led to a fumble and Brayton Schafer, the Warriors’ 6-2, 185-pound running back gained valuable yards before his quarterback Dane Isaak ran in from 16 yards. The two would prove the Comets’ biggest foes all afternoon, each scoring three touchdowns including one by Schafer on an interception.

The Warriors were 1B champions in 2017 and fought back, seeking to advance to their third consecutive title game.

Schafer crossed the line three times, putting his eastern Washington team ahead. Once he stole the ball from an opponent’s hands and raced to gain yards.

Naselle responded. Lindstrom recovered his own high-bouncing onside kick then gave the ball to Joey Strange. The second smallest player on the roster raced 48 yards through a huge gap to score, allowing himself a discreet double pump of the raised ball in celebration.

Eaton had begun the game worried about Tutu’u’s prior ankle injury. In the first two quarters, the 5-11 senior had been brought down in the backfield. But as the half ended he added the two-point conversion that gave his team a lead it would not relinquish.

The second half saw Lindstrom send Warren Wirkkala into the end zone on a 24-yard play. The score had Naselle fans cheering — then roaring even louder moments later when freshman Kolten Lindstrom grabbed a loose ball one yard from the line to set up his brother’s final touchdown dash.

Offensively, the rest of the half belonged to Tutu’u. As Tumwater Stadium’s eloquent announcer Jared Burbidge struggled to pronounce his name, ACH’s defense struggled to stop him.

For the record, the ax’s runs were 56, 23, 49 and 36 yards. On one, he broke a tackle to create his own gap. In another, he powered over the line with three defenders hanging onto his 195-pound frame. For his final score with three minutes remaining, he delicately sidestepped, leaving a defensive back grasping at air.

He amassed 184 yards on 15 carries. But the tackle count was a critical stat, too. Jimmy Strange excelled with 17, but brother Joey, freshman Kolten Lindstrom and senior Gabe Gilbert had eight each, and Ethan Lindstrom seven.

Gilbert was especially effective sacking Isaak with relish then combining with Kolten Lindstrom to bring down Schafer at a key moment.

Isaak sought to match Lindstrom with deceptive plays at quarterback, and he was a sprinter, too. His final TD featured an 80-yard run.

With time waning, the Warriors recovered a fumble at the kickoff and the sophomore reached the end zone again after a lengthy run. But the score was disallowed because of a pushing penalty.

Vocal assistant coaches Matt Scrabeck and Pete Riley kept the pressure on their Comets, even with the margin at 20 points. “Keep it simple!” Scrabeck yelled. “Finish strong.”

They didn’t break into smiles or start any sideline handshakes until Tutu’u’s final TD when the clock showed three minutes — not long enough for any realistic comeback.

As the players knelt in a semicircle before lining up for a team photo, their head coach just couldn’t get the words out. “I am so proud to be a Comet,” was all Eaton could manage before the tears came.