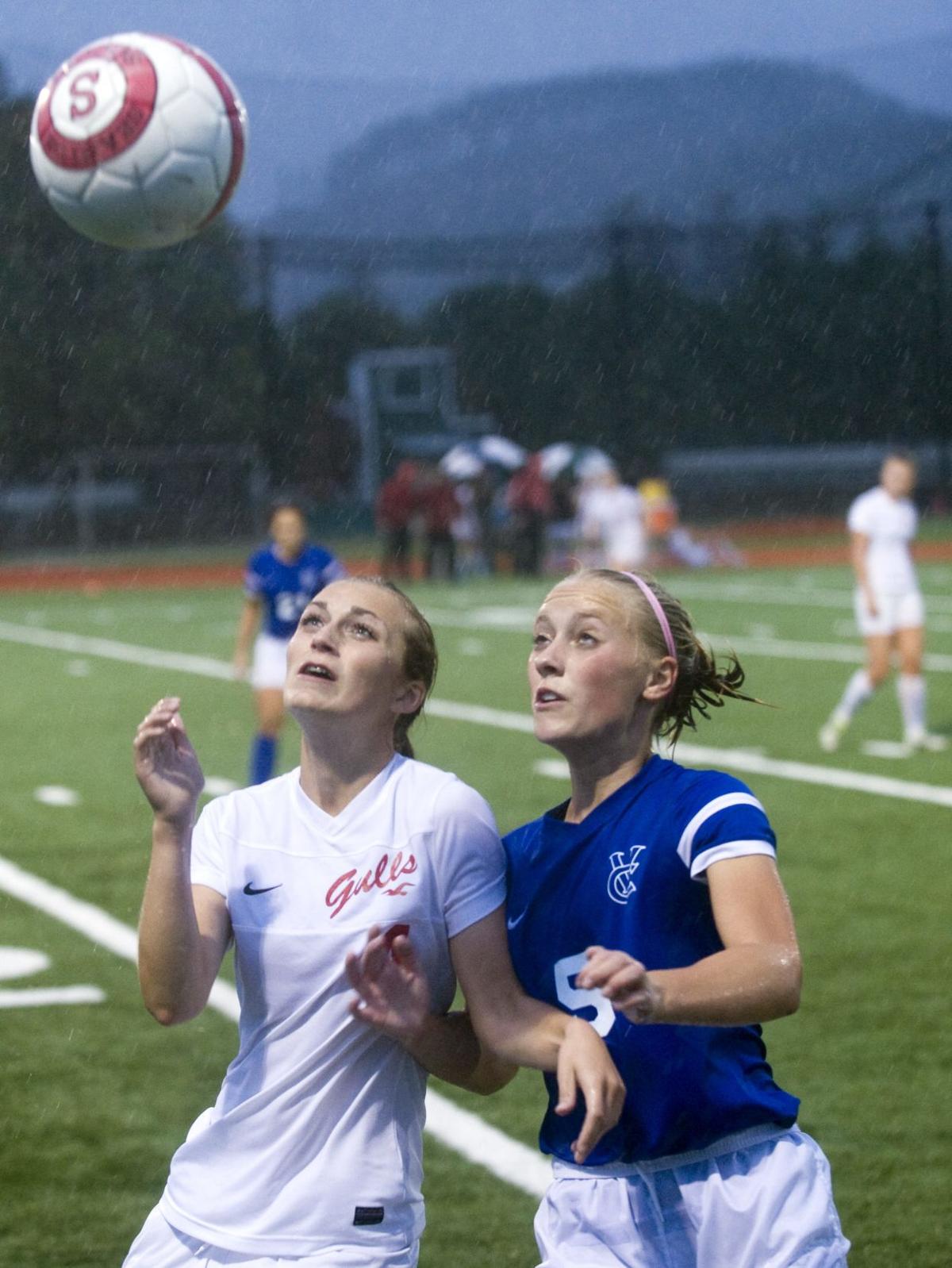 Seaside's Lizzy Barnes, left, jockeys for position to gain control of the ball Tuesday against Valley Catholic. The Valiants stormed off with a 4-0 win under the rainy skies of Broadway Field. 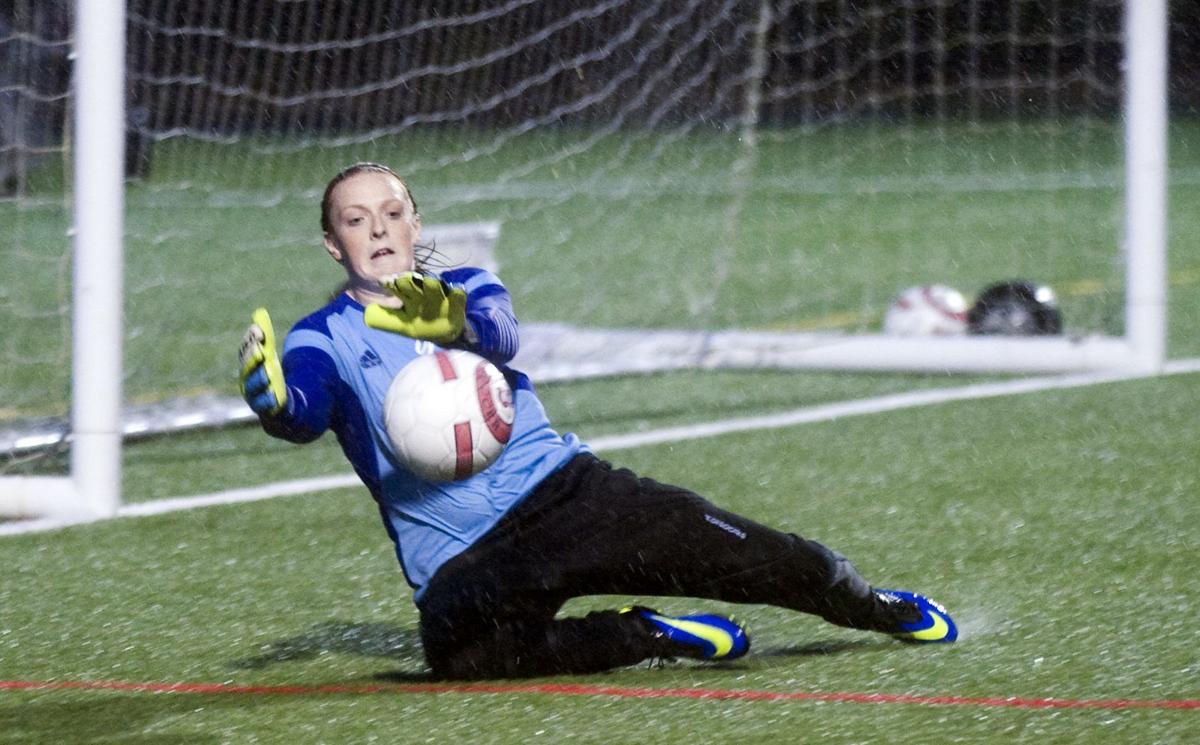 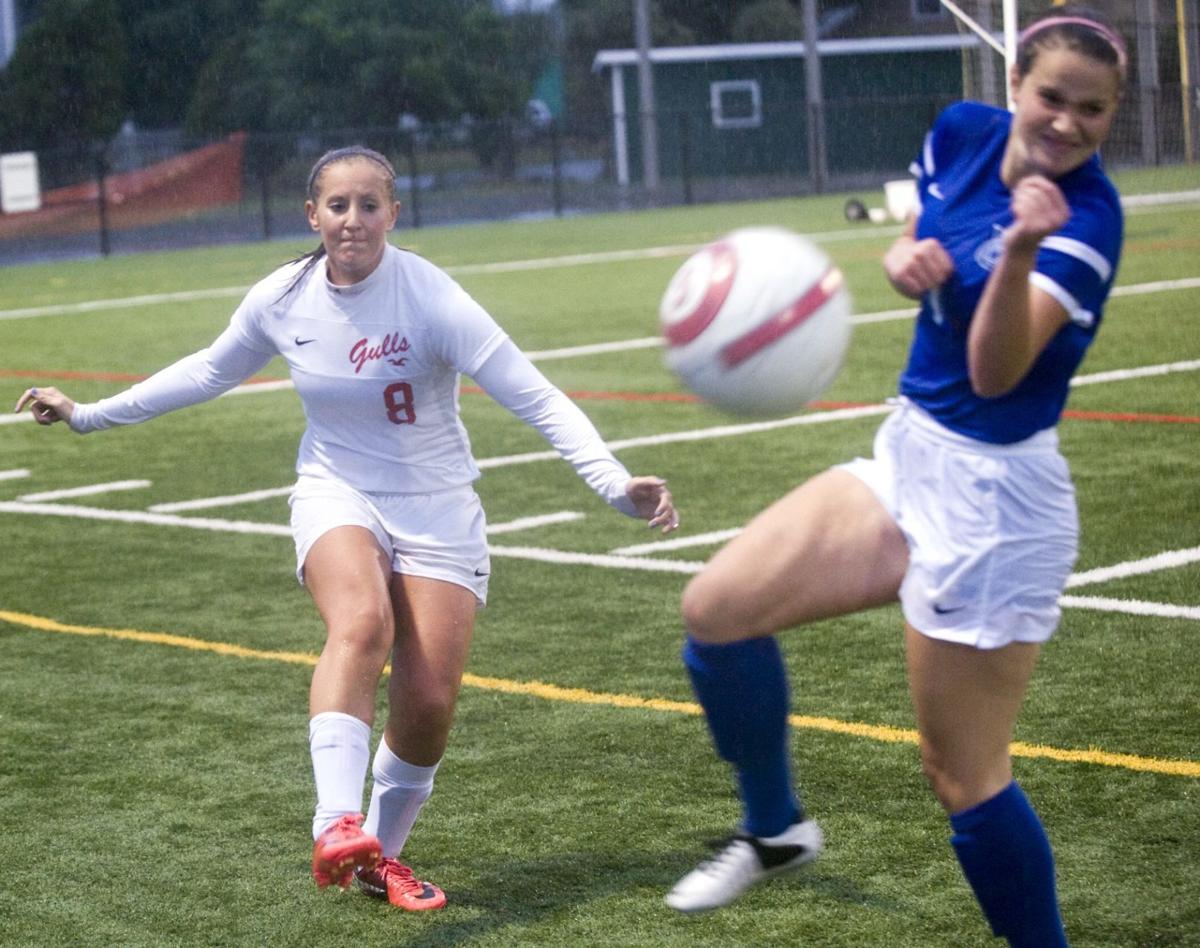 Seaside's Brianna Babbitt clears the ball for the Seagull defense, booting the ball away from Valley Catholic.

Seaside's Lizzy Barnes, left, jockeys for position to gain control of the ball Tuesday against Valley Catholic. The Valiants stormed off with a 4-0 win under the rainy skies of Broadway Field.

Seaside's Brianna Babbitt clears the ball for the Seagull defense, booting the ball away from Valley Catholic.

SEASIDE — The Valley Catholic Valiants made a pretty big splash — literally — in their first official league game at the Class 4A level.

And the Valiants showed that they will likely be a contender at the 4A level as well, as they posted a 4-0 win over the Gulls on a very wet night at Broadway.

“It was a wet one, but a fitting way to welcome the Valiants to the Cowapa League,” said Seaside coach Matt Johnson. “They were a well-balanced and very skilled team.”

It took Valley Catholic just over two minutes to score, as junior Meredith Woolverton lofted a beautifully placed corner kick to 6-foot senior Ella Turkot, who knocked in an easy header in front of the net for a quick 1-0 lead.

The Valiants tacked on goals in the 14th minute (a 15-yard shot by Turkot up the center), and the 38th minute (Sarah Connelly from 30 yards out, unassisted).

Valley Catholic might have had more, if not for several big saves by Seaside keeper Allison Bussert.

The Valiants had 10 shots on goal in the first half and nine more in the second. Bussert made saves on the first seven, before Turkot put away another header off a corner, this time from Jessi Beyer in the closing minutes.

Seaside had just one shot on goal, an attempt from 20 yards out by Maddi Utti in the 51st minute that deflected off the cross bar.

“The second half we responded well and made things a lot tougher for them,” Johnson said. “We are a better team for the experience, and I look forward to meeting them again. The girls responded well to the challenge, they played more physical in the second half and attacked with more purpose.”

The Lady Fisherman “really stepped up their level of play tonight,” said Astoria coach Sarah von Colditz. “I knew our new formation would take some time getting used to, and we are finally getting it. The girls left their heart on the field tonight. Each player walked off the field with their head high.”

Astoria had several near misses in front of the Scappoose net, as Jenna Rudolph, Morgan Postlewaite and Lexi Law all had a chance to put the ball in the back of the net, “but each ball was either saved or skimmed off to the side,” von Colditz said.

“Scappoose is a very good team with an excellent touch,” she added. “Their passing skills and movement are amazing to watch. Being defending state champions, they definitely showed us they know how to play beautiful soccer.”

SCAPPOOSE — Scappoose pulled off a stunning upset in a Cowapa League boys soccer opener Tuesday, as the Indians got past defending champion Astoria, 4-2.

Scappoose senior Devin Timmons had the hat trick, and the Indians snapped a 2-2 tie with two goals in the final 20 minutes for the victory.

After going 18-0-2 in Cowapa League games over the last two years, it was Astoria's first loss on the field in league play since a 4-1 setback at Tillamook in 2011.

“It was a heart-breaker,” said Astoria coach Bill Patterson. “But (the Indians) did everything we knew they were capable of doing. They have a pretty good forward (Timmons), and they like to play the long ball to him, and it worked three times.”

The first Scappoose goal was in the 26th minute, from Timmons, and it happened to be the only goal of the first half.

Astoria tied the game just three minutes into the second half, with Lalo Garcia scoring off a through-ball from Hector Chavez.

A defensive lapse by the Fishermen allowed Scappoose to retake the lead, before Chavez tied it at 2-2 on a penalty kick.

The next two goals belonged to Scappoose, the final goal coming with four minutes left.

The Loggers rallied from a 10-1 deficit in Game 1 before losing.

Chelsia Albee had three kills, and Stacey Aho and Bailey Corder each had two kills for Knappa.