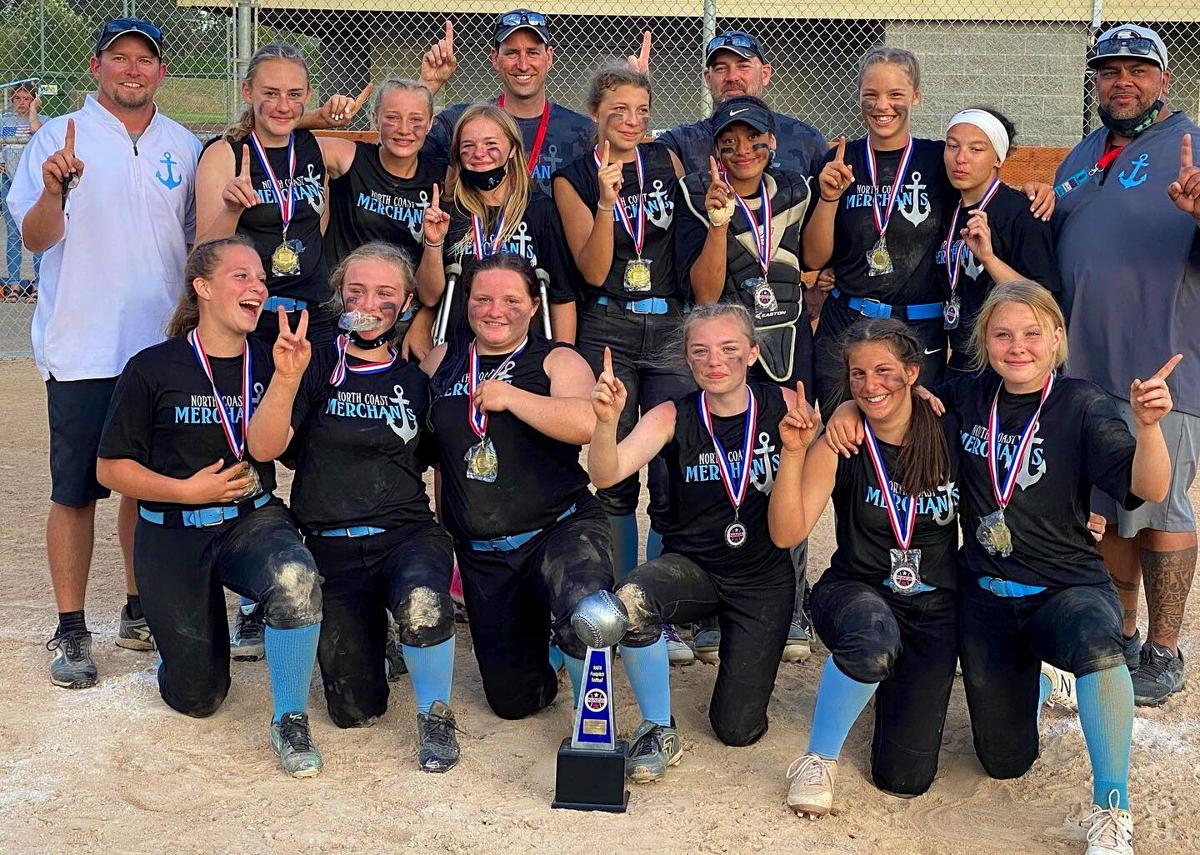 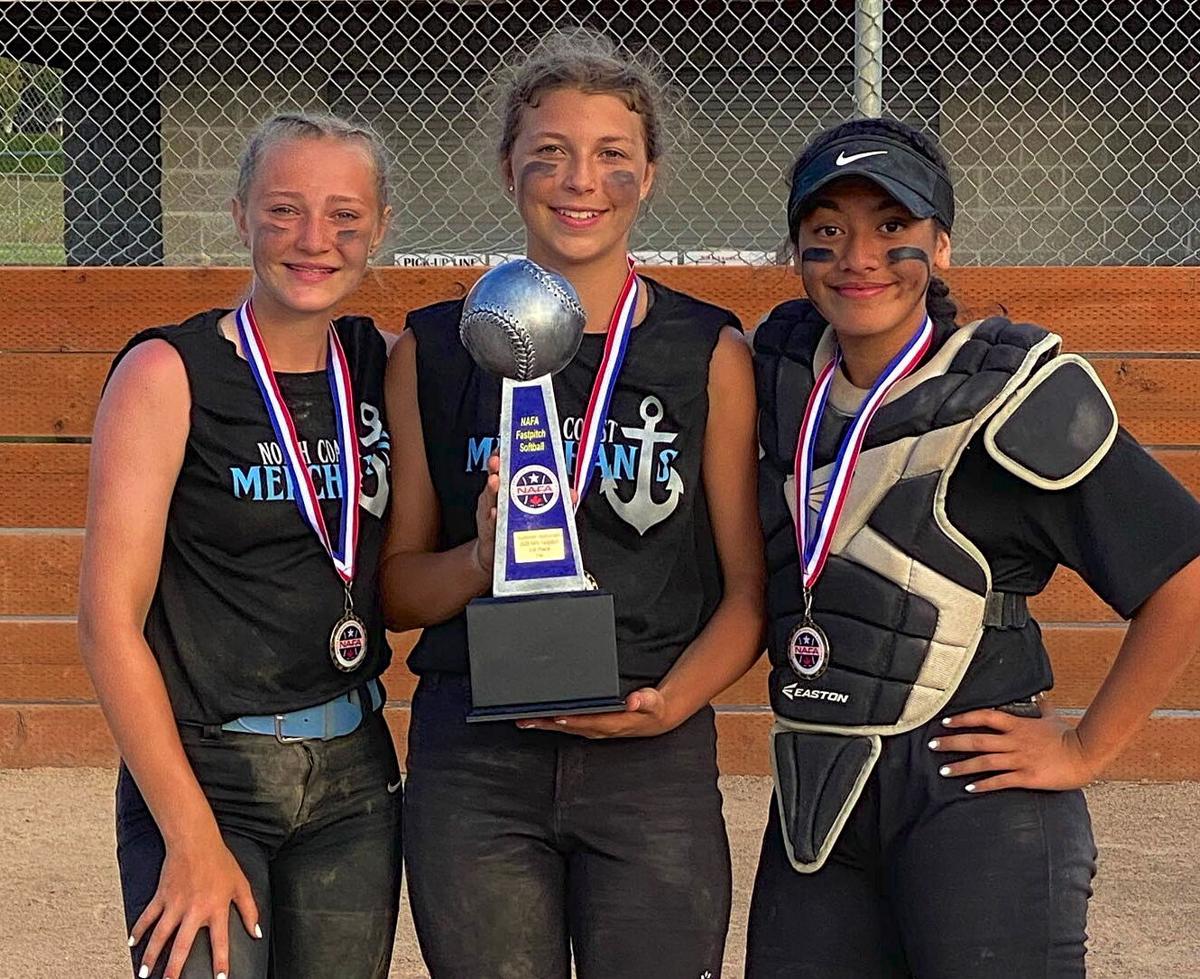 Youth softball on the lower Columbia has a national title this summer, as one local team scored a championship over the weekend in Newberg in the North American Fastpitch Association nationals tournament.

The North Coast Merchants’ 14U team, the top-seeded team after pool lay, won eight games in four days to win the association’s nationals title at the Darnell Wright Sports Complex.

“Our girls played their best softball in the two years we have coached this group,” said North Coast coach Ian O’Brien. “On Saturday in our third game of the day, we lost a tight one to the team we ended up beating in the championship.”

Meanwhile, the Astoria Future Fish 10U team placed second in their nationals title game against Beaverton, but still went 3-2 over four days to reach the championship game.

North Coast capped the competition with a 12-5 victory over the Glide Wildcats Sunday night.

The Merchants and the ‘Cats met four times in three days, with North Coast winning three and losing one.

Following a Saturday night loss to the Wildcats in a championship semifinal, the Merchants had to come back through the losers bracket, and beat Glide twice on Sunday to win the state title.

The team of players from the North Coast region began their big week with a 5-2 win over the Wildcats Thursday afternoon.

Glide had six hits to the Merchants’ four, but three runs by North Coast in the first inning held up for the win. Lily Simpson had two of the four hits for the Merchants, while pitcher Maddie Wilkin earned the victory, striking out six with three walks.

North Coast followed with an easy 10-0 win over the Lake Oswego Renegades, as Wilkin tossed a no-hitter with only one walk to end pool play.

The Merchants had nine hits in four at-bats with Jamie Annat going 2-for-2 with three RBIs while Wilkin had a double and London O’Brien and Taeja Tuimato both had triples.

North Coast had just one game Friday, a 10-0 win over the St. Helens Black Ops.

Wilkin threw a three-hitter over four innings, with seven strikeouts and no walks. Simpson drove in five runs with a double and a home run, and O’Brien added a triple.

The blowout victories continued Saturday as the Merchants opened with an 8-1 win over the Gresham Affliction.Wilkin allowed just one hit with 10 strikeouts and five walks, and North Coast scored a 13-2 victory against Dayton MVP, as the Merchants pounded out 13 hits over five innings. Eight players had hits, which included a triple by Gabbie Martinez and a double for O’Brien. Wilkin gave up seven hits, but drove in four runs to help her cause.

The only loss of the tournament for North Coast came Saturday night, when the Wildcats scored a 4-1 win in an error-plagued (seven combined) game.

North Coast bounced back with another blowout victory Sunday morning, 14-0 over Dayton MVP, as Wilkin, Taylor Pass and Jasmine Horton combined on a one-hit shutout with four strikeouts and no walks in a game that lasted just three innings. Tuimato was 3-for-3 and scored three runs.

In their third game of the week against the Wildcats, the Merchants gained some revenge for Saturday’s loss with a 4-3 win.

After falling behind 2-1, the Merchants took the lead with two runs in the third, and tacked on one more in the fifth, when North Coast loaded the bases without a hit, and scored on a bases loaded walk.

Following a short break, the same two teams played for the fourth time in four days, this time for the championship.

Leading 3-1 after four innings, the Wildcats woke up in the bottom of the fifth, scoring twice to tie the game.

But North Coast answered big, exploding for six runs in the top of the sixth.

Lena Wakefield scored the first run on a wild pitch, and Tuimato followed with a line drive single to center, scoring Pass.

Two more runs crossed the plate on a fielder’s choice grounder by Simpson, and O’Brien slammed the door shut with a two-run, inside-the-park home run for a 9-3 lead.

The Merchants tacked on two runs in the seventh on more run-scoring hits by Tuimato and O’Brien.

O’Brien finished 4-for-5 at the plate and drove in three runs, and Tuimato had five RBIs, going 3-for-5 with three runs scored, including an inside-the-park homer in the third inning.

Pass had a triple and also scored three runs.

Wilkin carried the Merchants in the circle all season, and was the winning pitcher in the title game. She allowed 10 hits, with 11 strikeouts and two walks, throwing 113 pitches.