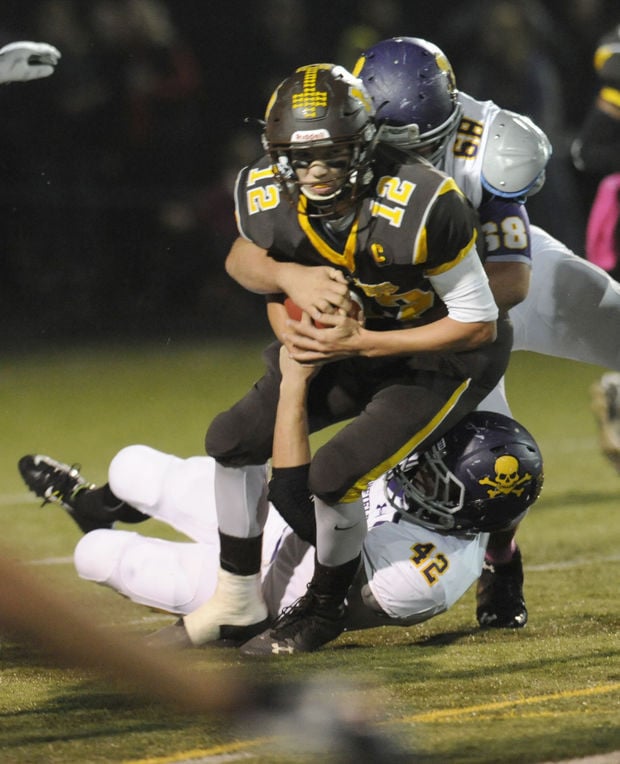 A couple of coastal football powers will go at it Friday night in North Bend, where the Bulldogs will host Astoria in a first-round game of the Class 4A football state playoffs.

The kickoff is scheduled for 6 p.m. and the game will be streamed online at www.astoriaford.com.

It’s a rematch with a lot more at stake this time around.

The Fishermen will be making their second trip of the season to North Bend, where Astoria hopes to make it 2-for-2 against the defending state champion Bulldogs.

Late touchdown passes from Fridtjof Fremstad to Ryan Palek and Ryker Helmersen helped beat the Bulldogs, who lost again the following week to Marist, but then won five straight to win the Far West League. They haven’t lost since.

On the line in Friday’s game will be a trip to the quarterfinals, where the Fishermen have not been since 2010.

Astoria coach Howard Rub expects the Bulldogs to be keyed up for this one.

“We’ve watched more recent film, and they’ve become a little better at what they were trying to establish early on,” he said. “Their (10-7) win against Marshfield was fairly impressive. Marshfield had been scoring a lot of points, and for them to really shut them down is really impressive. We know we’re definitely in for a battle.”

Make no mistake — the Fishermen will be playing to win instead of taking the “just glad to be here” approach — but they’re also just glad to be here. Especially after back-to-back 1-4 league seasons, and no state playoffs since 2010.

“We had early exits (in 2011 and ’12), so to be in the round of 16 after two seasons of being done by Halloween, it feels real good to be in the tournament,” Rub said. “We’re hopeful that we can get hot at the right time.”

The winner of Friday’s game will advance to face either North Marion or Sisters.

The scouting report on the Bulldogs:

“Siuslaw and South Umpqua gave them pretty good games,” Rub said of North Bend’s 33-27 and 38-28 victories, respectively. “Overall, they have really good skill position players, and some really good guys up front who get off the ball well.”

“He does a real good job running the read-option,” Rub said. “He’s a two-way threat, throwing and running. They like to spread the ball around in the first half, and the second half is all about trying to create some space for him.”

Another key factor could be North Bend placekicker Ian Bream, who kicked two field goals in the September game. Carter Wallace kicked one field goal for Astoria, a 35-yarder that ultimately provided the deciding points.

“(Bream) has a great leg,” Rub said. “The kicking game will be really big again, just like special teams were big the first time around.”

Astoria’s secret to success: Play their “bend-but-don’t-break” defense, sit back and wait for the opponent’s turnovers and penalties. In other words, let the other guys make the mistakes.

In last week’s win over South Umpqua, the Lancers outgained the Fishermen 356 to 206, but South Umpqua had three turnovers and committed several key penalties in the red zone.

In the September win at North Bend, the Bulldogs outgained Astoria 364 to 254, but North Bend was flagged for 11 penalties for 117 yards, which included two big pass interference calls.

Astoria trailed 20-10 with 3:40 left, but a blocked punt with under a minute remaining helped the Fish complete their comeback victory.

The Fishermen are still without Fremstad (separated shoulder), but they will have two other key players at full strength who saw limited action in the previous game.

“We didn’t have Wyatt Dietrich in the lineup,” Rub said. “He got hurt on the fifth play of the game, and it was Clay Englund’s first game back after his August injury, so he was not a big part of the offensive game plan. We hope that having those guys in the mix will create some different problems for (the Bulldogs).”

Helmersen is running the Astoria offense in place of Fremstad, and led the Fishermen to their first playoff win in five years last week.

“Ryker is going to have a good handle on the offense,” Rub said. “If we’re in that two-minute mode, he will be able to perform well in that. Everything that we’re trying to do in the run game, he has a good understanding.”

But never count a Cowapa League team out. Astoria, Banks and Scappoose all hope to do some damage in the playoffs, while the Far West League has two teams in the bottom half of the bracket (Marshfield and North Bend).

“The Cowapa, the Far West and the Oregon West — those three leagues have really provided some tough levels of competition” this year, Rub said. “It will be interesting how it all shakes out.

“We feel fortunate that we were able to get a win back in September, and we’ll do everything in our power to try and find a way to make that happen again,” he said. “Our guys have experienced what it’s like with their band, their crowd and their stadium.

“The Purple & Gold that is able to attend will be loud and supportive. That was a big factor in last Friday’s win. Our crowd was fantastic.”

Look for another close battle, with turnovers playing a key role. And since the Fishermen usually win the turnover battle …

Astoria’s reappearance in the state playoffs won’t be a one-year deal. The Fishermen junior varsity went undefeated this season, 10-0.