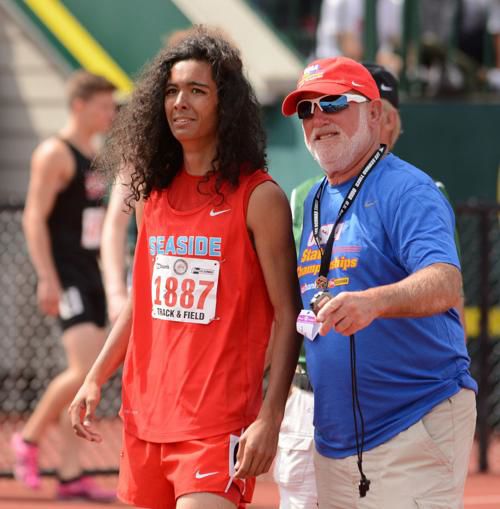 Serving as a meet official in the 2018 state track meet at Hayward Field, Neil Branson points to the time run by Seaside's Rafi Sibony, left, who finished fourth in the 800 meters. 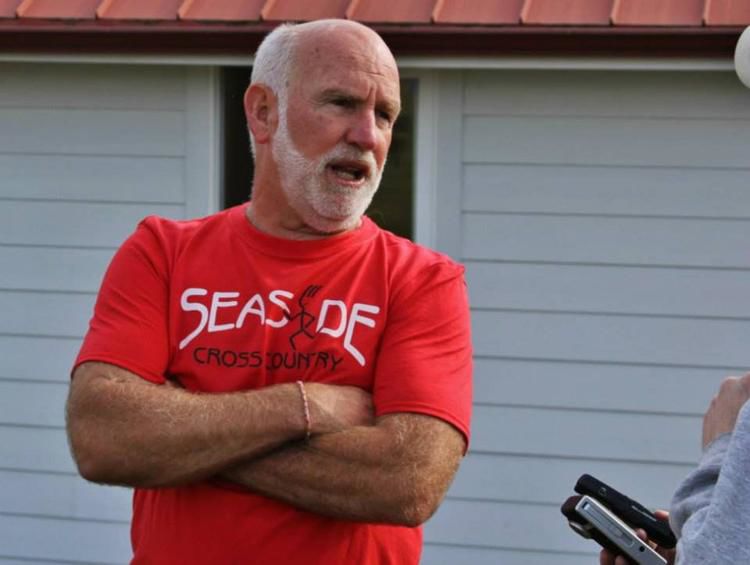 Being interviewed at a past 3-Course Challenge cross country meet, Neil Branson is now the one interviewing athletes at big track meets.

Serving as a meet official in the 2018 state track meet at Hayward Field, Neil Branson points to the time run by Seaside's Rafi Sibony, left, who finished fourth in the 800 meters.

Being interviewed at a past 3-Course Challenge cross country meet, Neil Branson is now the one interviewing athletes at big track meets.

While traveling in eastern Africa this past winter, I was contemplating a May and June filled with track and field.

I was to volunteer at the Nike Jesuit Relays, and Regis Community Twilight Invitational. At the Cowapa League championships, I was slated to be the meet referee.

For the OSAA state championships, I would have been an official in some capacity; while for the Pac-12 Championships, Pre Classic and Olympic Trials, I would don my correspondent’s hat.

It was a fast-moving bus loaded with fun. The wheels of the bus that were going round and round started slowing in mid-March, and slowed considerably with high school and collegiate spring sports being sidelined, and then came to a screeching halt with the cancelation of the Tokyo Olympics. Bummer.

Bummer, a bit for me, yet I was a small cog in the sizable machinery of track and field. My heart sank for the athletes. Mostly, I pined for high school seniors who would never get back the lost season.

Oregon state track and field championships in six classifications, two genders, and 17 events out the window and potentially 228 athletes (counting relays) missing out on being a “state champion.”

Senior collegiate athletes, if they choose to do so, can return for a final season. Professional track athletes, for most, the end came early enough that they could shift gears back to an elongated building process.

Certainly some were primed. This was their year, and for others the extra year of training will be a silver lining. Yet also to be taken into consideration for the professional athlete is the loss of earnings.

Those of the upper echelons, who consistently win or place high in the Diamond League meets, earn sizable prize money, and at the apex are those athletes getting paid appearance fees for some events.

Necessity is the mother of invention. Athletes have a yearning to compete, while track and field faithful have an equal craving to watch athletes test their skills. If the men and women are unable to engage each other in person, then what is to be done?

Here are some examples of the creative ways athletes have met, or will meet, on the field (sometimes remote) of honor.

Seven pole vaulters in Duesseldorf, Germany competed at a drive-in theater while fans watch from their cars. In yet another vaulting competition, world record-holder Mondo Duplatis, two-time World Champion Sam Kendricks and 2012 Olympic champion Renaud Lavillenie competed in their backyards in Louisiana, Mississippi and France, respectively

Not your normal “who goes the highest” wins, but who could clear five meters (16 feet, four inches) the most time in two 15-minute halves. Lavillenie and Duplantis each made 36 clearances The former was considered the winner as he made he made his 36th vault a few seconds before Duplantis.

The world’s top three decathletes, world record-holder Kevin Mayer of France, reigning World Champ Niklas Kaul of Germany and 2019 world silver medalist Estonian Maicel Uibo got into the action. In 10 minute segments they were to see how many successful four meter (14-foot) vaults they could make. Then on to the shot put, it was who could throw beyond 12 meters (39-4) in the same time period and a point for every 20-meter shuttle they could cover in five minutes.

Coming up Saturday, there is a virtual meet between Oregon Track Club Elite and the Atlanta Track Club. Events will be limited to 600 and 1,200 meters, and a 2x2x400 mixed gender relay. Both clubs will compete at closed venues with no crowds present.

The event can be seen on Atlanta Track Club's YouTube and Facebook accounts starting at 4 p.m. Saturday.

Earlier in June, there was a “meet” between Kenya and Norway, with each team competing at home. I did not see the meet nor have I been able to find the results, yet a friend of mine said there was some stiff competition and amazing results.

What matters about all this? If you are a fan of track and field, of sports, you can Google and find a wide variety of unique competitions. And, to me, the best of it all is the ingenuity of people who love the world of athletics. Where there is a will there is a way. And if you want to find a very good humored and professionally-called events, check out the Marbula One races on YouTube.