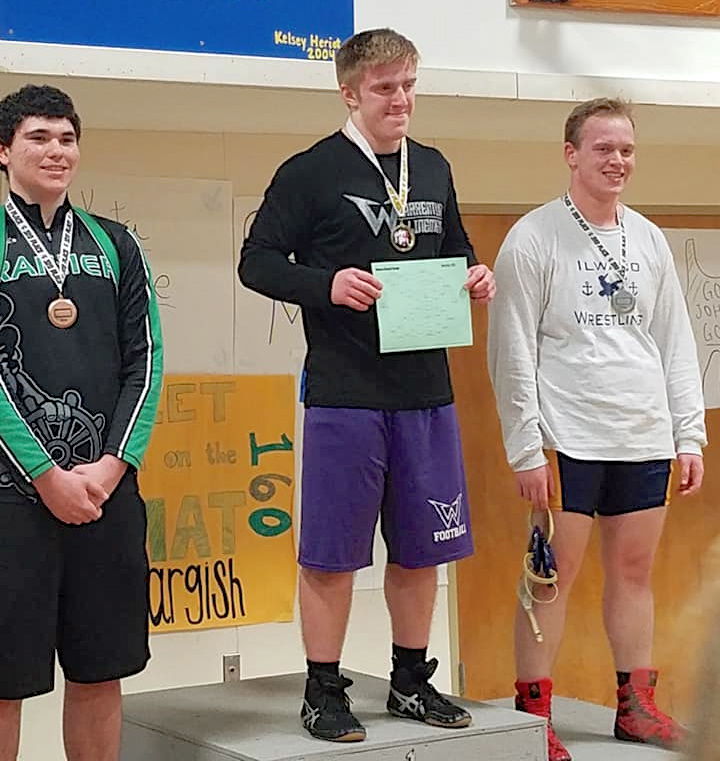 With the post-season fast approaching, the Warrenton wrestling team is beginning to heat up again, as the Warriors won their third tournament of the season over the weekend.

The Warriors made the short trip across the river and won the team title of the annual Beach Brawl, held Saturday at Ilwaco High School.

“We scored a lot of bonus points for falls, and everybody contributed,” said Warrenton coach Corey Conant. “Sam Irwin won the title at 220, and Jade Vollner and Isabella Carr each won in the girls division.”

At 220 pounds, Irwin only had to wrestle twice to win the championship.

After two byes, he pinned Dylan Prock of Nestucca in 33 seconds, then won by fall over Dakota Shepard of Ilwaco in 1:52.

Warrenton’s Aricin Rodriguez was second at 106, with wins over Jacob Whittles of Nestucca and Daniel Snyder of Life Christian, before Tyson Portman of Raymond scored a 4-3 decision over Rodriguez in the final.

Armin Rodriguez won his first two matches by fall at 126 pounds, then lost a 9-6 decision to Rainier’s Logan Chapman in the title match.

Parker Greenawald did the same at 132, winning in the quarterfinals and semifinals, before Kelso’s Hudson Backman pinned Greenawald in the final.

In the girls’ tournament, Carr pinned her first two opponents (Brooklynn Hanna of Life Christian and Bethany Martin of Ilwaco), then won by injury default in the final at 146-159 pounds.

Vollner won by fall in all three of her matches in the 190-235 division, including a pin over Ilwaco’s Serena Kuhn (1:27) in the final.

Andrew Gastelum lost in the semifinals to Greenawald, then scored a major decision (11-2) over Deryk Turner of Neah-Kah-Nie in a consolation match.

For the Fishermen, Astoria’s Gunnar Olsen took second at 120, where Olsen won three in a row in the championship bracket, including a 29-second fall over Seaside’s Frederick Hoeffiger in the quarterfinals and a 6-4 decision against Warrenton’s Austin Atwood in a semifinal.

Will Chavez of Neah-Kah-Nie pinned Olsen in the title match at the 5:27 mark.

Astoria teammate Skylar Smith added second place points at 285, where Smith had two byes to start the tournament, scored a fall over Ilwaco’s Bryan Sparks in the semifinals, then lost by fall to Ilwaco’s Michael Rodda in the title bout.

At 110 pounds in the girls’ tournament, Astoria’s Emma King won two matches against the same wrestler for the title, pinning Clatskanie’s Nevaeh Douma, the second time in 2:37.

For the Warriors, “Our district is made of almost entirely different teams than are in our region, so while we are thrilled to win, we still have work to do against district relevant teams,” Conant said.

Warrenton has the second day of league duals Thursday, and the duals will determine seeding for the district tournament, Feb. 14-15 in Amity.

“It’s a very exciting time of the year, and we can’t wait to wrestle at districts,” Conant said.

The Warrenton girls travel to Century High School for the northern regionals, Friday and Saturday. The top four wrestlers in each weight class qualify for state. Four girls will also qualify from the southern regional, to create an eight-girl bracket at each weight for the state tournament.