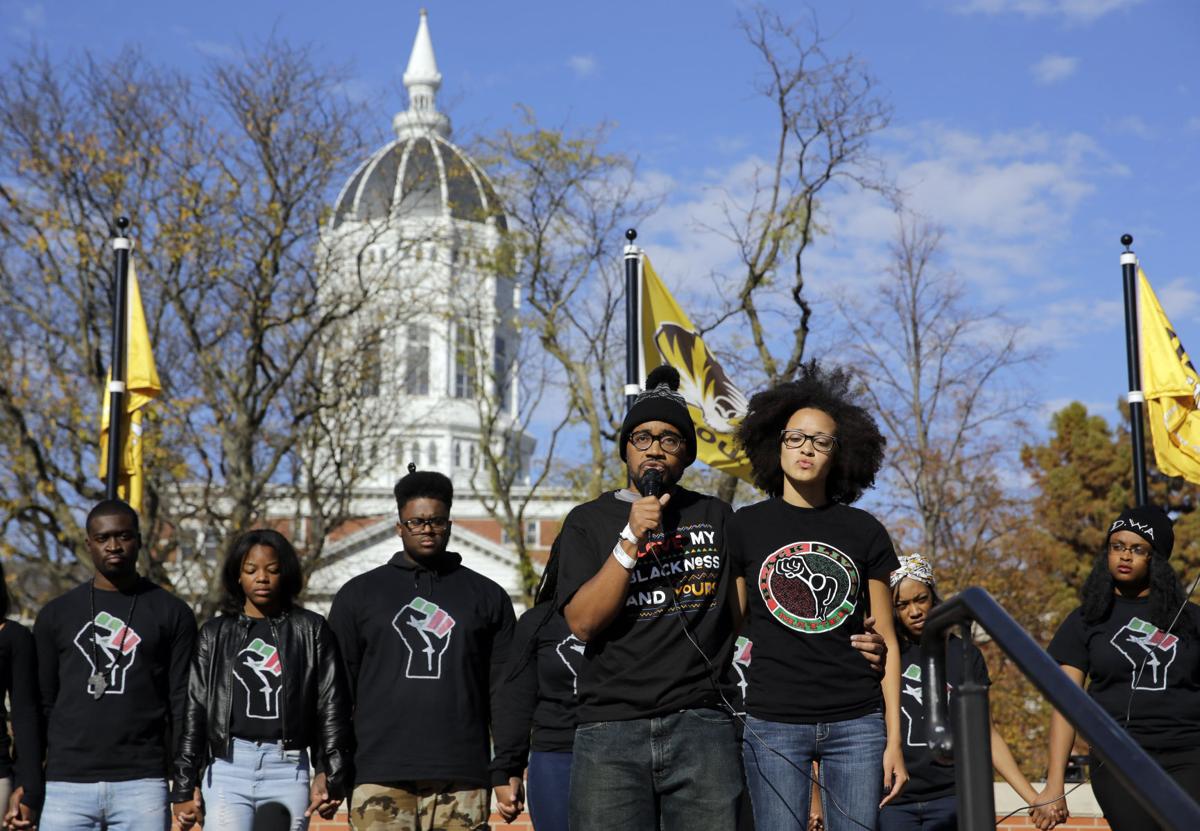 Jonathan Butler, front left, addresses a crowd following the announcement that University of Missouri System President Tim Wolfe would resign Monday at the university in Columbia, Mo. Butler has ended his hunger strike as a result of the resignation. 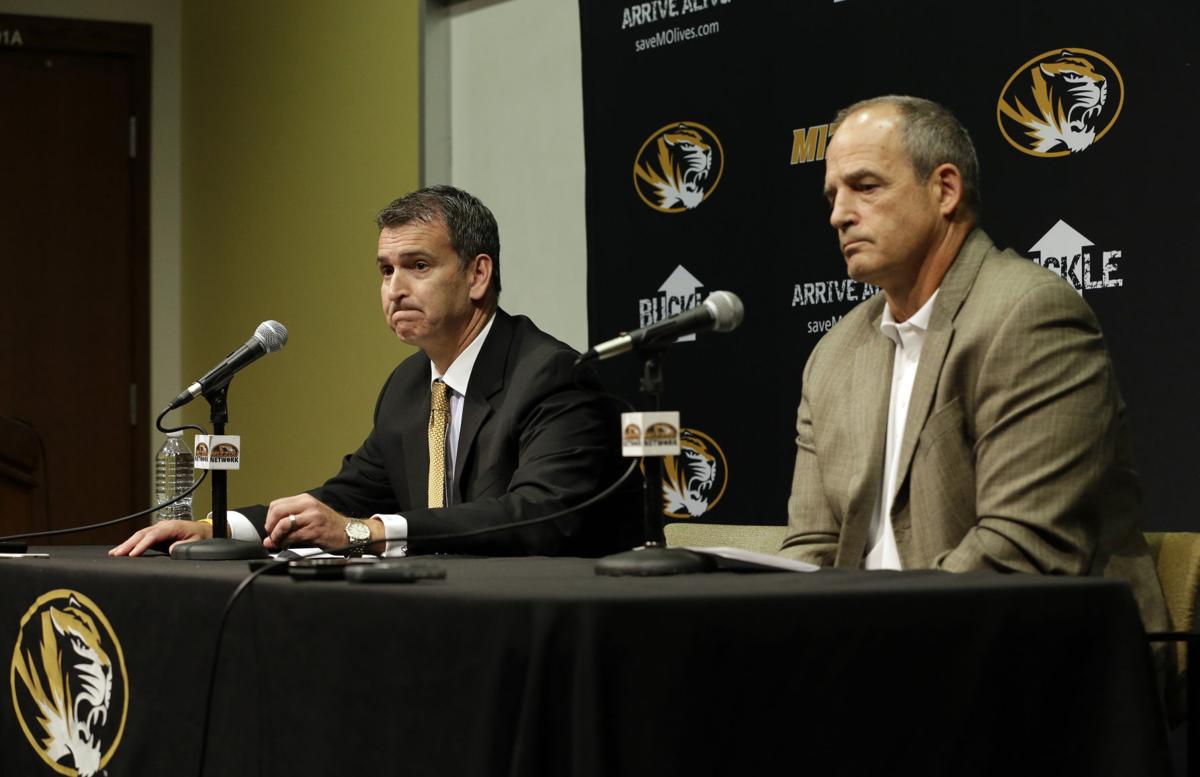 Missouri Athletics Director Mack Rhoades, left, and head football coach Gary Pinkel address the media Monday in Columbia, Mo. Football will resume at Missouri following the resignation of University of Missouri system president Tim Wolfe after several members of the team, pointing to Wolfe's inaction in handling of racial tensions at the school, announced over the weekend that they would not play until the president was gone.

Jonathan Butler, front left, addresses a crowd following the announcement that University of Missouri System President Tim Wolfe would resign Monday at the university in Columbia, Mo. Butler has ended his hunger strike as a result of the resignation.

Missouri Athletics Director Mack Rhoades, left, and head football coach Gary Pinkel address the media Monday in Columbia, Mo. Football will resume at Missouri following the resignation of University of Missouri system president Tim Wolfe after several members of the team, pointing to Wolfe's inaction in handling of racial tensions at the school, announced over the weekend that they would not play until the president was gone.

The Missouri football team banded together to add some high-profile heft to a campus protest that resulted in Monday’s resignation of Tim Wolfe, the president of the state university system. Wolfe was under scrutiny for how he handled complaints about racism and other student-welfare issues, and he was out of a job just two days after the football players indicated they wouldn’t practice or play unless changes were made.

That plan included skipping Saturday’s game against BYU in Kansas City, which would have cost the school more than $1 million.

It was an extraordinary declaration of solidarity coming at a time when the leaders of college sports are adjusting to more empowered and outspoken athletes than they’ve seen in years, emboldened by court victories against the NCAA — and now with the ability to vote on NCAA legislation — and more vocal than ever thanks to social media.

“These black football players understood that they have the power,” said Shaun Harper, executive director for the Study of Race and Equity in Education at the University of Pennsylvania. “That is so rare. I don’t know another class of black people on a university campus that has as much power as these guys, who generate millions of dollars for their institutions and billions of dollars for their athletic conferences. Not in our modern history have we seen black students collectively flex their muscle in this way.”

Harper authored a 2013 study on black male athletes and racial inequities in Division I sports. According to the study, blacks make up 63 percent of Missouri’s football and men’s basketball players, but less than 3 percent of the total undergraduate population.

Because they are often sheltered and controlled within athletic departments, black student-athletes aren’t always aware of their power, Harper said.

“Hopefully, this situation raises their consciousness about their authority,” he said. “If black men on these teams and at other places that are like Mizzou do what these guys just did, it could be a form of activism that procures lots of benefits for them as well as for the black student collective they represent.”

The rise of the empowered college athletes goes beyond race but there is no denying black athletes have been leading figures in some of the most significant recent examples.

Two seasons ago at Grambling, a historically black school, players refused to play a game against Jackson State because they were upset about the firing of a coach, long bus trips to games and poor facilities. The university then committed more than $30,000 to make improvements to the weight room.

Last year, football players at Northwestern, led by quarterback Kain Colter, who is black, tried to unionize team members. Colter’s efforts ultimately failed, but many of the benefits the movement sought — guaranteed four-year scholarships and athletic scholarships that cover the full cost of attendance — are now a reality across wide swaths of Division I.

In March, Oklahoma’s football team refused to practice for a week after members of the local Sigma Alpha Epsilon fraternity chapter were caught on video singing a song that used a derogatory term for black people and referenced lynching.

Sooners linebacker Eric Striker, who is black, responded with an angry call for change and became a de facto spokesman for the team. Striker’s teammate, center Ty Darlington, said he’s not sure what would have happened if the SAE incident had occurred during the season, like Missouri’s situation.

“Thankfully, it never came down to us having to decide whether we were going to play games or not. But if it would have, that would have been such a difficult decision,” Darlington said Monday. “And I can’t say for sure what would have happened.”

At Oklahoma, football coach Bob Stoops supported his players and even joined in when they decided to hold a silent protest instead of practicing.

At Missouri, coach Gary Pinkel not only supported a group of about 30 players who announced they would boycott football, but he gathered the whole team the next day and united them all for the cause.

“They want to get more involved with the campus,” Pinkel explained Monday. “I think that’s a positive.”

Receiver J’Mon Moore said he was the first player to visit the protesters last week in the tent city that had popped up on Carnahan Quad. Moore promised his support to Jonathan Butler, the grad student who decided he would not eat until Wolfe stepped down, and then shared his experience with his roommate, Anthony Sherrils.

Moore and Sherrils then spoke to defensive back Ian Simon and defensive end Charles Harris and a desire to support Butler began to spread.

“Our plan was to use our platform to make a difference and stand behind Jonathan,” Moore said. “That’s what we did at the end of the day.”

The independence even showed Monday, as Pinkel held a news conference while his players were elsewhere: Out on campus, among other students celebrating Wolfe’s resignation, and issuing their own statement.

“We just wanted to use our platform to take a stance as fellow concerned students on an issue that has special meaning as a fellow black man’s life was on the line,” senior defensive back Ian Simon said. “We love the game, but at the end of the day, it is just that — a game.”

Harris stood nearby, wearing a T-shirt that read “I Can’t Breathe,” a reference to the words uttered by Eric Garner, an unarmed black man who died in a police chokehold in New York City in 2014.

“Let this be a testament to all of the athletes across the country that you do have power,” Harris said. “It started with a few individuals on our team and look what it’s become. Look where it’s at right now.”