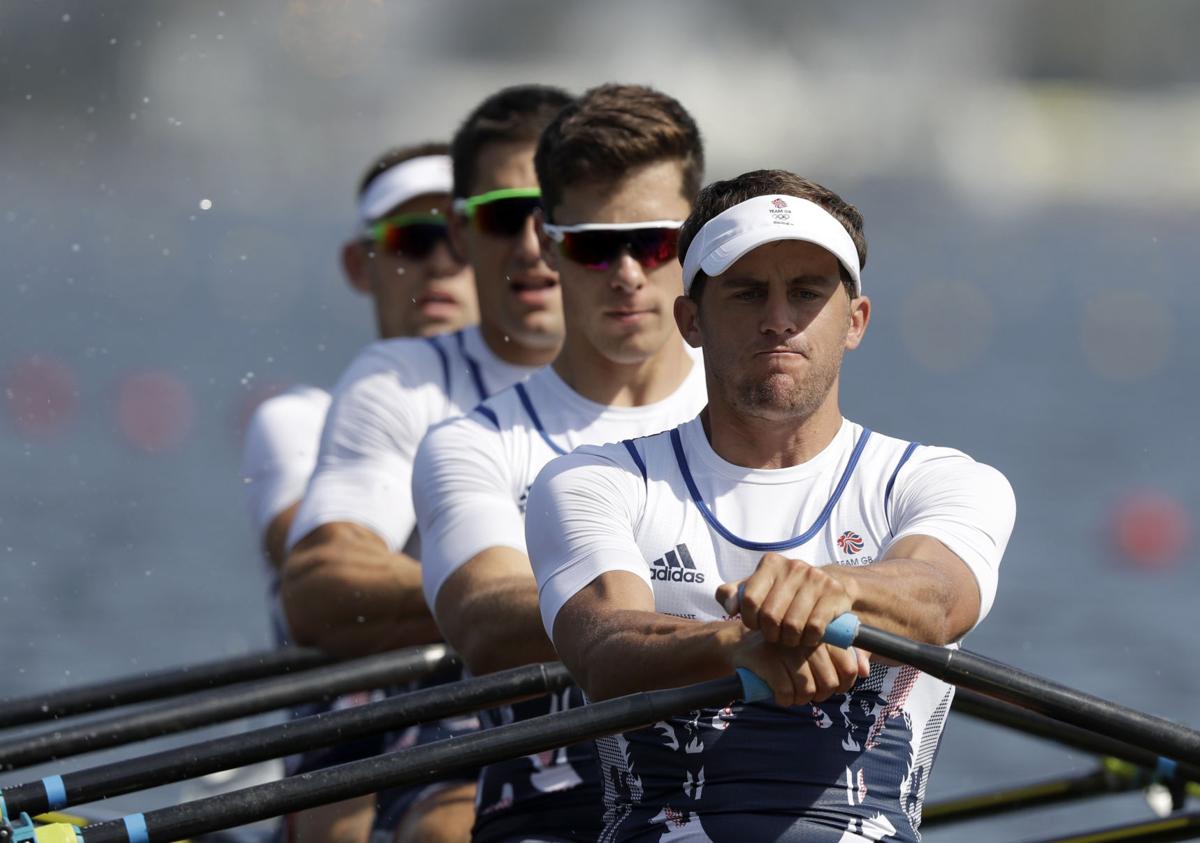 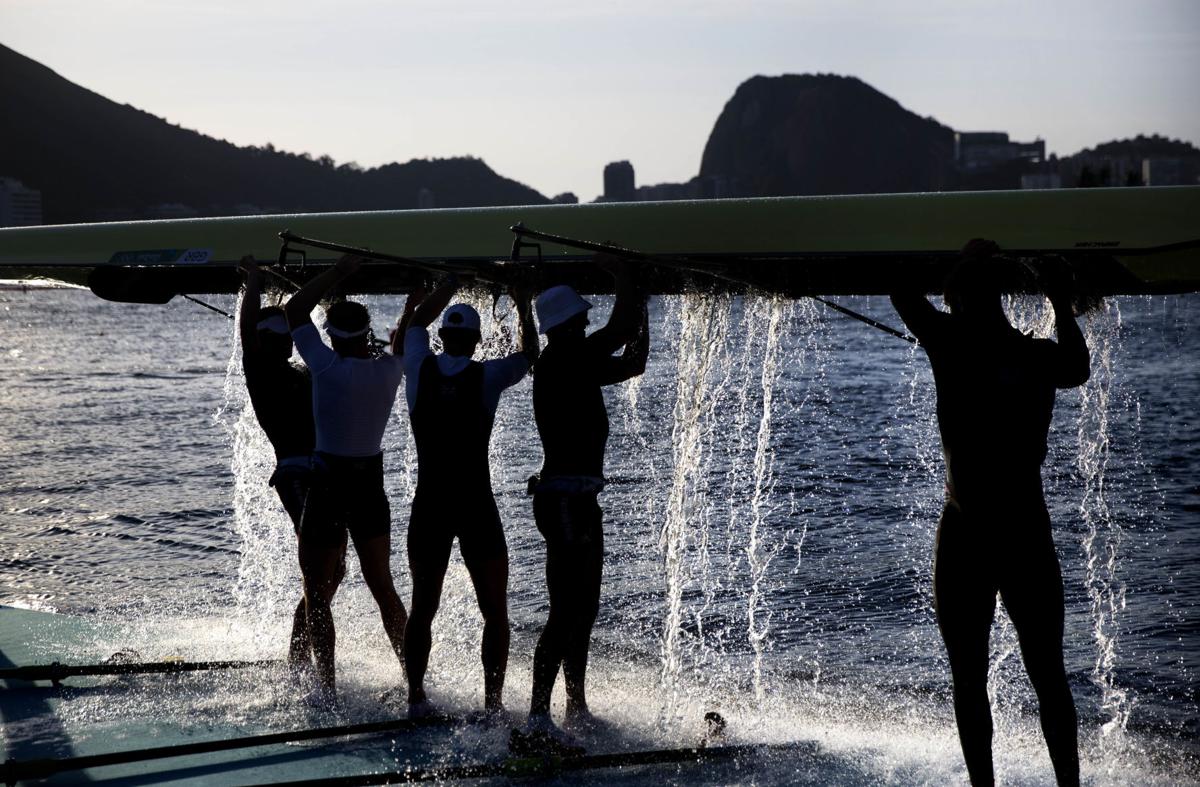 Rowers from Great Britain dump water out of their boat after a practice session at the rowing venue in Lagoa at the 2016 Summer Olympics in Rio de Janeiro, Brazil, Sunday.

Rowers from Great Britain dump water out of their boat after a practice session at the rowing venue in Lagoa at the 2016 Summer Olympics in Rio de Janeiro, Brazil, Sunday.

RIO DE JANEIRO — There’s a contradictory mission for rowers competing in this year’s Summer Olympics. Get into your boat, work your hardest — but try to avoid the water.

And definitely don’t swallow it.

On Saturday at the polluted Rodrigo de Freitas lagoon — the venue for Olympic rowing — rowers bleached the handles of oars. They swished with anti-bacterial mouthwash, kept water bottles in plastic bags, and took precautions to avoid coming down with diarrhea or other gastrointestinal symptoms that could compromise years of training and a chance at gold.

To the naked eye, the lagoon’s polluted water seemed clearer than usual on Saturday, likely the result of bioremediation to clean up the sewage-filled area.

Despite the immaculate appearance, a 16-month long independent analysis by The Associated Press has shown the rowing venue — and other water venues used by 1,400 athletes in the Olympics — is teeming with dangerous viruses from human sewage that could cause athletes to become ill.

Rio treats only about half of its sewage, dumping the rest into the waters surrounding the metropolitan area of 12 million. Despite promises the water would be clean by the opening of the games, the AP’s tests confirmed widespread contamination.

The pollution has set up a quandary for the athletes. Competitors in a water sport must essentially avoid the water.

Some have been training off and on for months in Rio, hoping to build up immunity. Others decided to come in quickly and take their chances.

Canadian rower Carling Zeeman rushed to the dock to prepare for her heat, and instead of racing strategy from her coach, she got something else.

“I was greeted by a bottle of hand sanitizer,” she said.

Officials did their best to put a positive front on the problem. The water, while polluted, does often look clean. Drier winter weather in Rio recently has also helped because there has been no torrential rain to flush human waste from the hillside slums that surround the city into the lagoon.

The water looked so pristine that Matt Smith, the executive director of World Rowing — the world governing body other the sport — made a bold claim.

Smith, who heads the Switzerland-based body, said the lagoon provided “excellent water quality,” which would shock Rio natives who live around the lagoon situated under the soaring Christ the Redeemer statue.

They are accustomed to smelling the stench, seeing fish die off, and few swim in a body of water that looks postcard-perfect from a distance but not so good up close.

Smith is relying on water-quality studies done by the state of Rio de Janeiro, which measure only bacteria levels. The studies have shown bacterial pollution levels regarded as safe by the World Health Organization and the International Olympic Committee.

The WHO and the state do not test for viruses, a more expensive and advanced test.

Many athletes complained more on Saturday about conditions they could see — in this case high winds and choppy water — and less about viruses and bacteria they couldn’t.

Still, avoiding the water is an impossible task.

“We try to avoid contact with the water as much as possible,” Australian rower Kim Brennan said, also detailing a day of white caps and spray on the wide, exposed lagoon. “Obviously, we were pretty much swimming in it today, so we’ll find out soon enough what’s in there.”

Brennan, an Olympic bronze and silver medalist in London, said her team was taking “extra precautions” and trying to “prioritize our hygiene.”

“We try to avoid any hand-to-mouth contact and try to avoid getting any of the water in our mouths,” Brennan said.

Mahe Drysdale of New Zealand was optimistic and said it was “a lot better than anyone expected it to be.” But he said he wasn’t a scientist — and still had a plan to combat the water.

“We’re just making sure we don’t put our hands in our mouth after touching the water,” he said. “And we make sure that anything we eat and drink has been protected from the water.”

But even on calm days, rowers get wet from spray and splash. And there are risks when the water gets rough.

A Serbian pair in sculls learned that the hard way when they tipped over, breaking the cardinal rule of avoiding contact. They tumbled straight in.