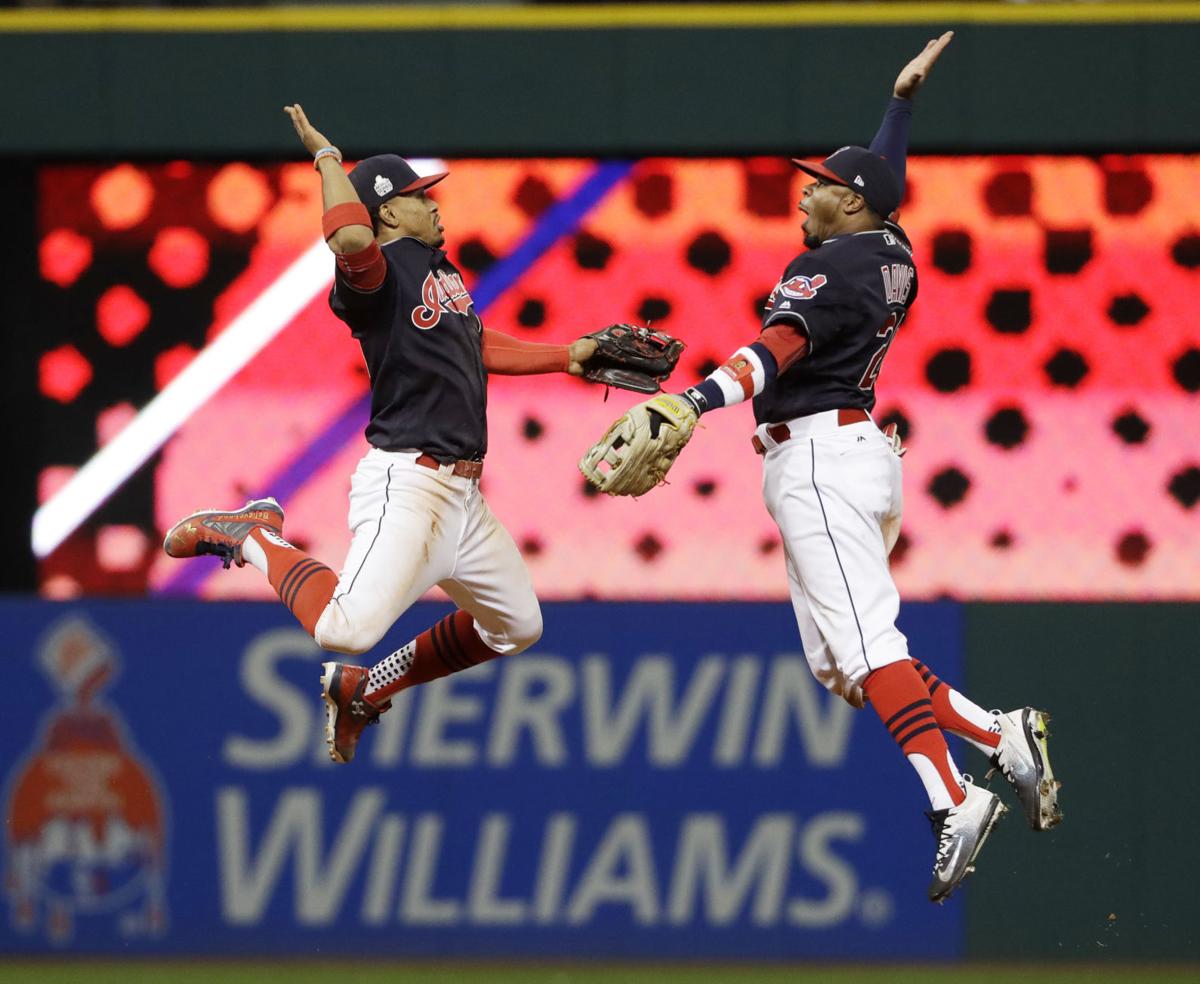 Cleveland Indians' Francisco Lindor and Rajai Davis celebrate after Game 1 of the Major League Baseball World Series against the Chicago Cubs Tuesday, Oct. 25, 2016, in Cleveland. The Indians won 6-0 to take a 1-0 lead in the series. 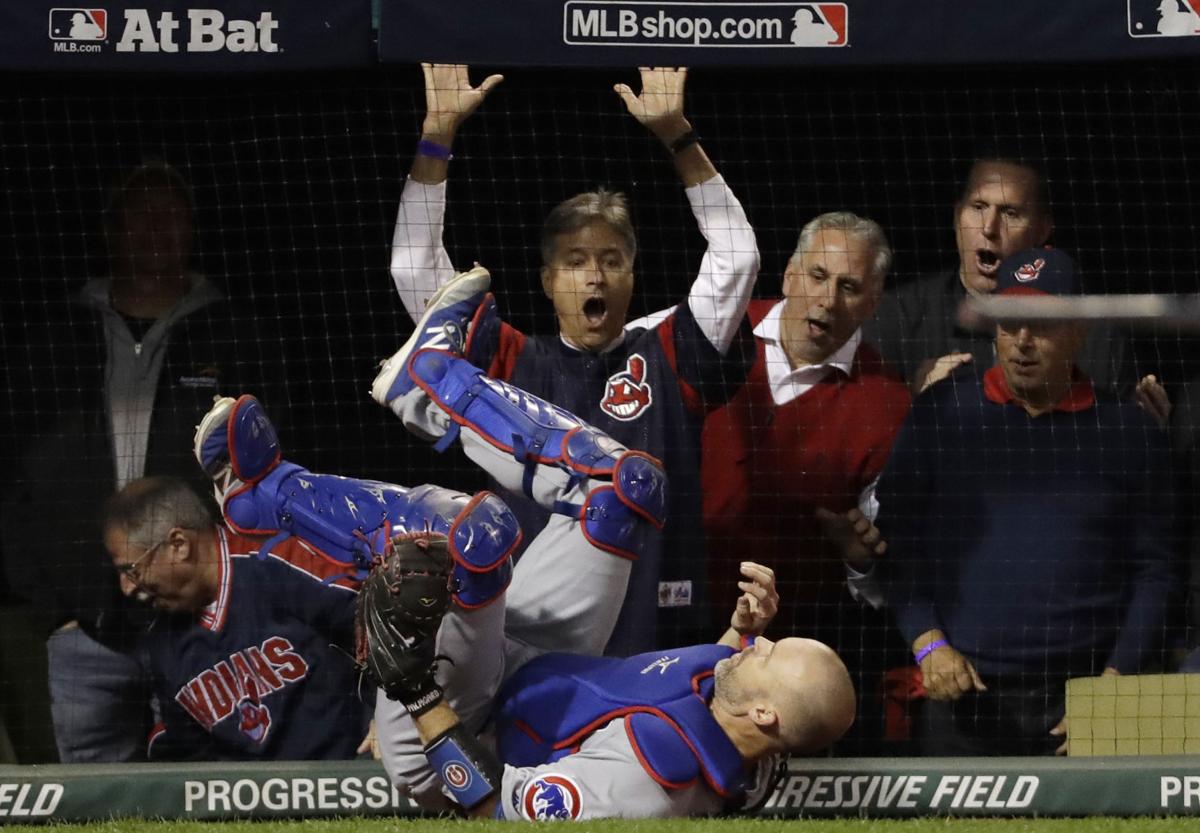 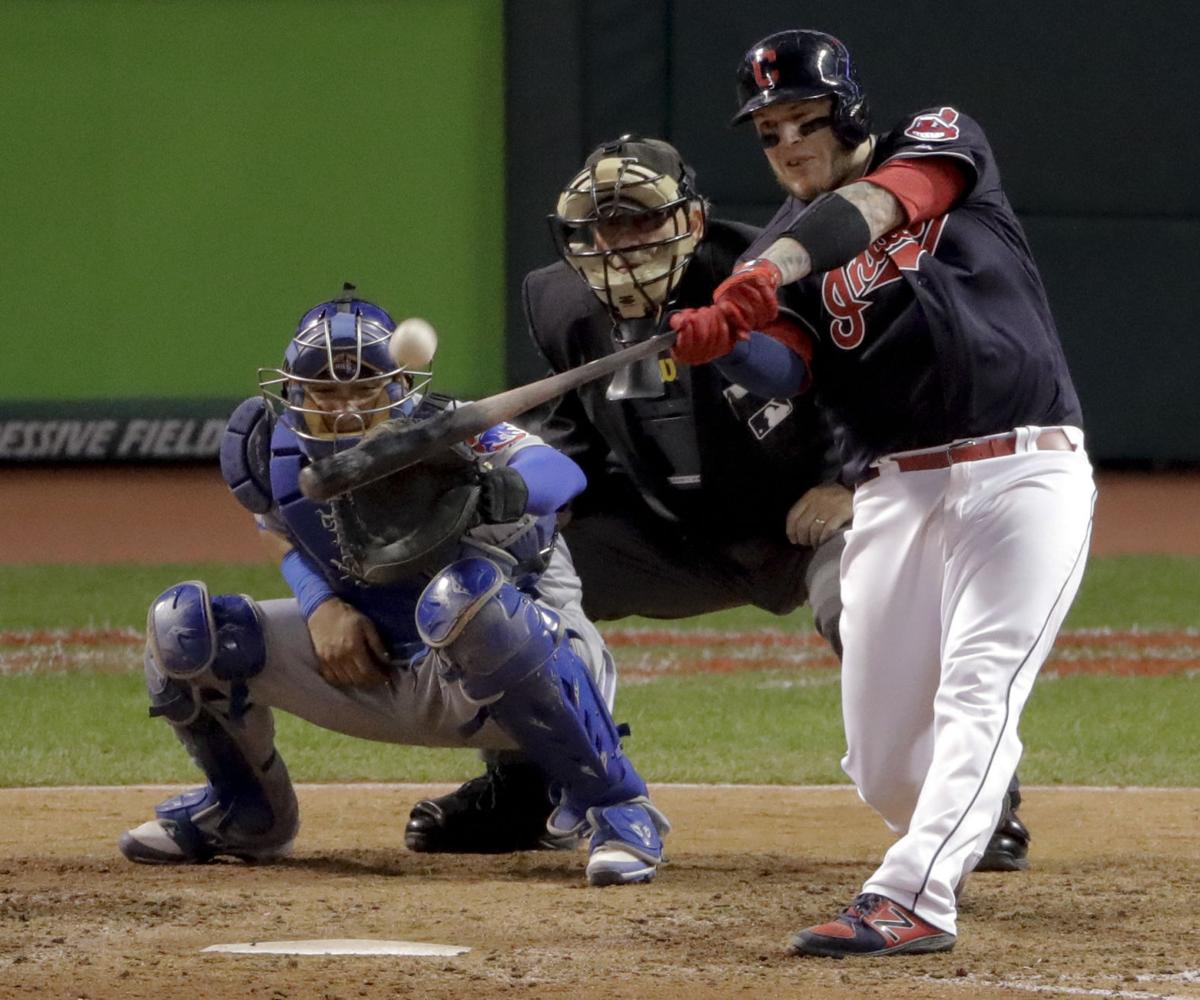 Cleveland Indians' Roberto Perez hits a three-run home run against the Chicago Cubs during the eighth inning of Game 1 of the Major League Baseball World Series Tuesday in Cleveland. 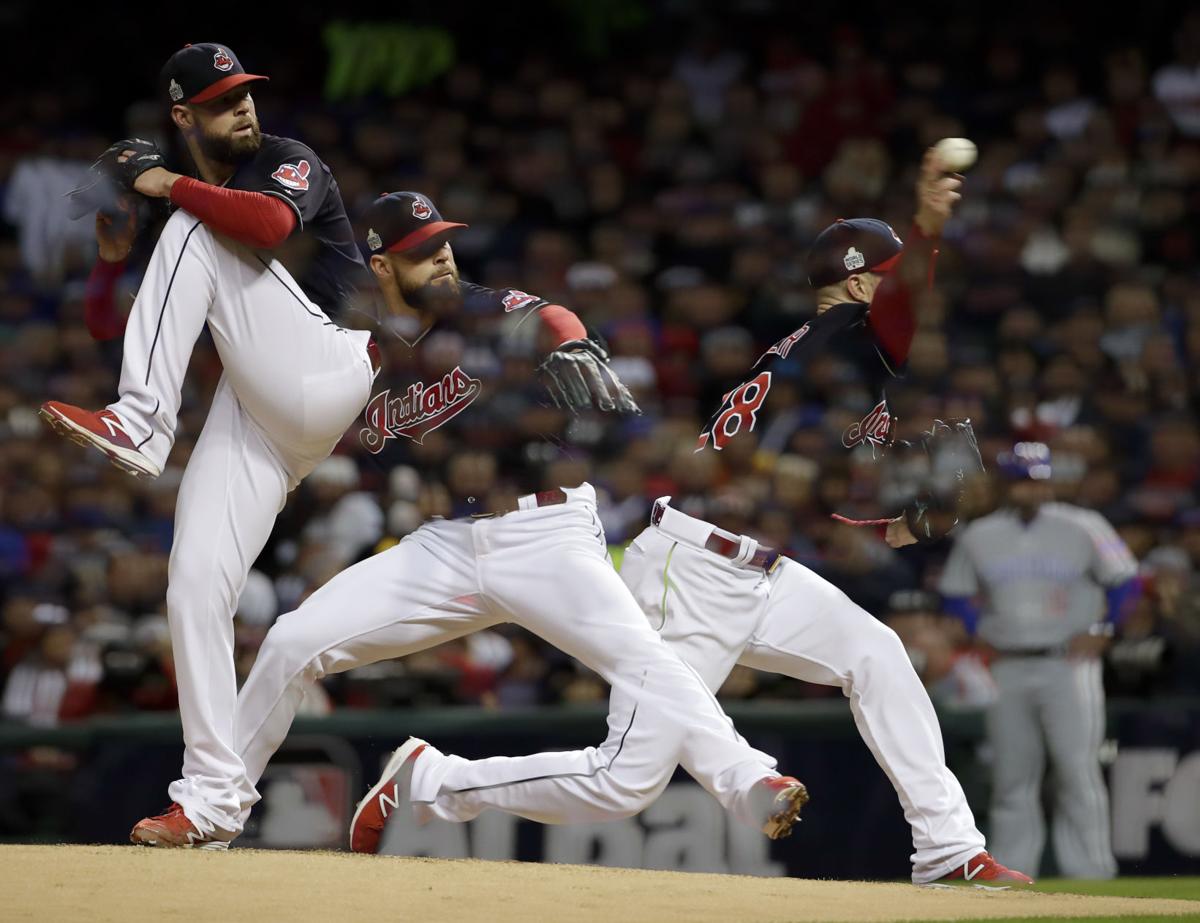 In this multiple exposure picture, Cleveland Indians starting pitcher Corey Kluber throws against the Chicago Cubs during the third inning of Game 1 of the Major League Baseball World Series Tuesday in Cleveland.

Cleveland Indians' Francisco Lindor and Rajai Davis celebrate after Game 1 of the Major League Baseball World Series against the Chicago Cubs Tuesday, Oct. 25, 2016, in Cleveland. The Indians won 6-0 to take a 1-0 lead in the series.

Cleveland Indians' Roberto Perez hits a three-run home run against the Chicago Cubs during the eighth inning of Game 1 of the Major League Baseball World Series Tuesday in Cleveland.

In this multiple exposure picture, Cleveland Indians starting pitcher Corey Kluber throws against the Chicago Cubs during the third inning of Game 1 of the Major League Baseball World Series Tuesday in Cleveland.

CLEVELAND — Corey Kluber and the Cleveland Indians are off to a pitch-perfect start in the World Series.

The Chicago Cubs, meanwhile, fell completely flat in their first appearance since 1945.

Kluber dominated into the seventh inning, Roberto Perez had four RBIs with a pair of home runs and the Indians beat the Cubs 6-0 in Tuesday night’s opener of a highly anticipated matchup between the teams with baseball’s longest championship droughts.

“It’s almost like you have that extra level of intensity,” said Kluber, who became the first Series pitcher to strike out eight batters in the first three innings.

AL Championship Series MVP Andrew Miller escaped a bases-loaded, no-out jam in the seventh and stranded runners at the corners the eighth, preserving a three-run lead and delighting the sellout crowd of 38,091 in Cleveland’s first-ever Series home opener.

“The atmosphere in the World Series is so great,” Miller said. “You can’t help but get caught up in it and enjoy it.”

The Indians pitched their fourth shutout in nine games this postseason. After stifling two dangerous lineups in Boston and Toronto during the AL playoffs, Cleveland shut down a hard-hitting Cubs team that scored 23 runs against the Dodgers in the final three games of the NLCS.

Back in the Series for the first time since 1997, the Indians scored twice in the first off October ace Jon Lester.

Perez hit a fourth-inning solo shot and added a three-run drive in the eighth against Hector Rondon, becoming the first Cleveland player and the only No. 9 batter to homer twice in a Series game.

“Oh, I don’t think I’ve ever had a night like that,” Perez said.

He has three home runs in 27 at-bats during the postseason after hitting three in 153 during the regular season.

Francisco Lindor added three hits as the Indians improved to 8-1 this postseason. Cleveland manager Terry Francona is 9-0 in the Series, including sweeps by his Boston teams in 2004 and ‘07.

The Game 1 winner has taken the title in the last six Series and 17 of 19.

Trevor Bauer, trying to come back from a sliced pinkie caused by a freak drone accident, starts Game 2 for the Indians on Wednesday night against Jake Arrieta. Because the forecast called for an increased chance of rain later in the evening, Major League Baseball took the extraordinary step of moving up the first pitch by an hour to 7:08 p.m.

Kluber painted the corners, and 24 of his 59 strikes were called by plate umpire Larry Vanover. Twelve batters were caught looking, including seven Cubs.

“I think his ball was moving too much today,” said Perez, Cleveland’s catcher. “We got guys off balance the whole night.”

Kluber combined with Miller and Cody Allen to fan 15 — two shy of the Series record for a nine-inning game — and Chicago went 2 for 15 with 10 strikeouts with runners on base.

With the Indians hoping for their first title since 1948 and the Cubs seeking their first since 1908, Lester stumbled in the opening inning.

He entered 3-0 with a 0.43 ERA in three Series starts and got his first two outs on five pitches before Cleveland loaded the bases with two outs. Jose Ramirez had a run-scoring swinging bunt single and Brandon Guyer was hit by a pitch — he led the majors with 31 during the regular season.

“There is an importance on small ball, but you can’t try to hit a swinging bunt. That’s a little bit of good fortune,” Francona said. “Then Guyer got hit, which he is really good at.”

Perez connected in the fourth for a 3-0 lead.

“When you’re going against a guy like Kluber who’s locked in from pitch one, to give up two in the first, that makes it tough,” Lester said.

Teams that combined for 174 seasons of futility, America’s biggest droughts since the Great Plains’ Dust Bowl of the 1930s, captivated even many non-baseball fans.

On a night of civic pride, LeBron James and the NBA’s Cavaliers received their championship rings next door prior to their season opener, and Cleveland hosted a World Series opener for the first time.

The Cubs had not played in the Series since five weeks after Japan signed the Instrument of Surrender ending World War II.

Kluber, whose win in the All-Star Game gave the AL home-field advantage in the Series, improved to 3-1 in the postseason and lowered his ERA to a sparkling 0.74.

He was pitching on six days’ rest, and his two-seam fastball darted through the strike zone. Kluber struck out nine in six innings and walked none.

Kyle Schwarber, making a surprise return in his first big league game since tearing knee ligaments on April 7, doubled off the right-field wall in the fourth — a drive kept in by a stiff wind on a 50-degree night. Kluber then got Javier Baez to fly out.

Zobrist’s leadoff double in the seventh finished Kluber, and Cleveland loaded the bases with no outs against Miller on Schwarber’s walk and Baez’s single. Pinch-hitter Willson Contreras flied to Rajai Davis in short center, and Davis threw home rather than double up Schwarber, who had strayed far off second.

Using his intimidating slider, Miller struck out Addison Russell and David Ross to escape the jam, stranded runners at the corners in the eighth by fanning Schwarber with his 46th pitch, his most in five years. Miller has thrown 20 scoreless innings in postseason play, including 13 2/3 innings with 24 strikeouts this year.

Allen worked the ninth to close it out.

Ramirez also had three hits each for the Indians, who beat Toronto in the ALCS despite hitting just .168. Zobrist had three hit for the Cubs.

Lester gave up three runs, six hits and three walks in 5 2/3 innings. He was rattled by Vanover’s calls, barking at the umpire in the third, then stopping for a discussion at the inning’s end.

“I’m confident. I know our guys are, too,” Schwarber said. “We put up good at-bats against those guys today. We just didn’t come up with a knock when we needed to.”