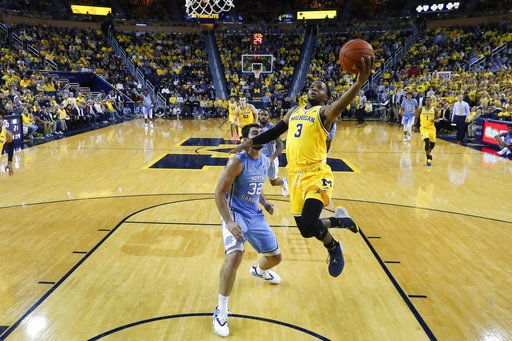 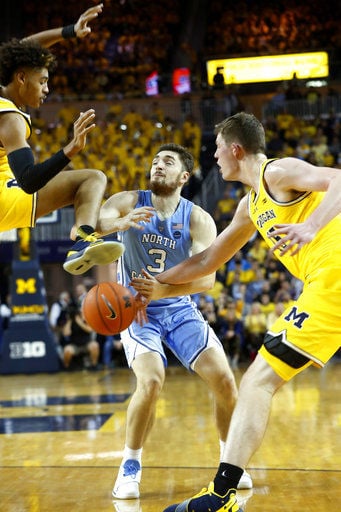 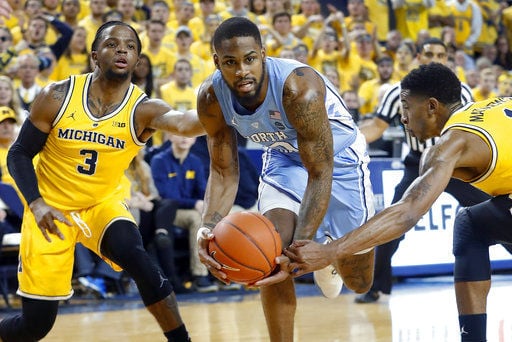 ANN ARBOR, Mich. (AP)  Charles Matthews had 21 points and seven rebounds, and Zavier Simpson spearheaded another impressive defensive effort by No. 7 Michigan, which rolled to an 84-67 victory over No. 11 North Carolina on Wednesday night.

Jordan Poole scored 15 of his 18 points in the second half for the Wolverines (7-0), who led 39-35 at halftime and then shut down the Tar Heels' fast-paced offense for a while. North Carolina (6-2) came in averaging 96.6 points per game, but Michigan was allowing half that at 48.3. The Tar Heels ended up between those two extremes, but a good deal closer to the lower number.

Michigan outscored North Carolina 34-16 in the first 12:13 of the second half. At times, just getting a shot to the rim felt like an accomplishment for the Tar Heels. An alley-oop dunk by Jon Teske put the Wolverines up 49-39, causing North Carolina to take a timeout. Matthews provided an even more emphatic highlight later on, slamming home an offensive rebound while drawing a foul.

Matthews completed that three-point play to make it 56-42, and then Teske and Matthews blocked shots at the other end. A 3-pointer by Poole made it 63-43.

Michigan led 73-51 before North Carolina went on an 11-0 run. Matthews halted that with a 3-pointer.

North Carolina was sharp offensively early, taking a 21-11 lead, but the Wolverines responded with a 19-4 run that included 10 points by Iggy Brazdeikis. Michigan closed the half on a bright note as well. Matthews sank a 3-pointer, then the 7-foot-1 Teske dove on the floor to secure a loose ball, helping set up a 3 by Poole in the final seconds.

North Carolina: The Tar Heels were on the road  and they're certainly not alone in losing big to Michigan this season. Villanova fell by 27 to the Wolverines at home. But this was an ugly night for North Carolina, which started well on the offensive end and still ended up shooting 39 percent for the game.

Michigan: The Wolverines probably wish the NCAA Tournament started now. Matthews had a terrific all-around game at both ends of the court, and Michigan showed yet again that it can shut down even a talented offensive team for extended stretches.

Michigan has the win over Villanova and this rout. If the Wolverines make it through the rest of the week without a loss, they could move up a few spots, depending on what teams above them do. North Carolina figures to drop after a second loss in seven days.

Michigan: The Wolverines open their Big Ten schedule at home against Purdue on Saturday.