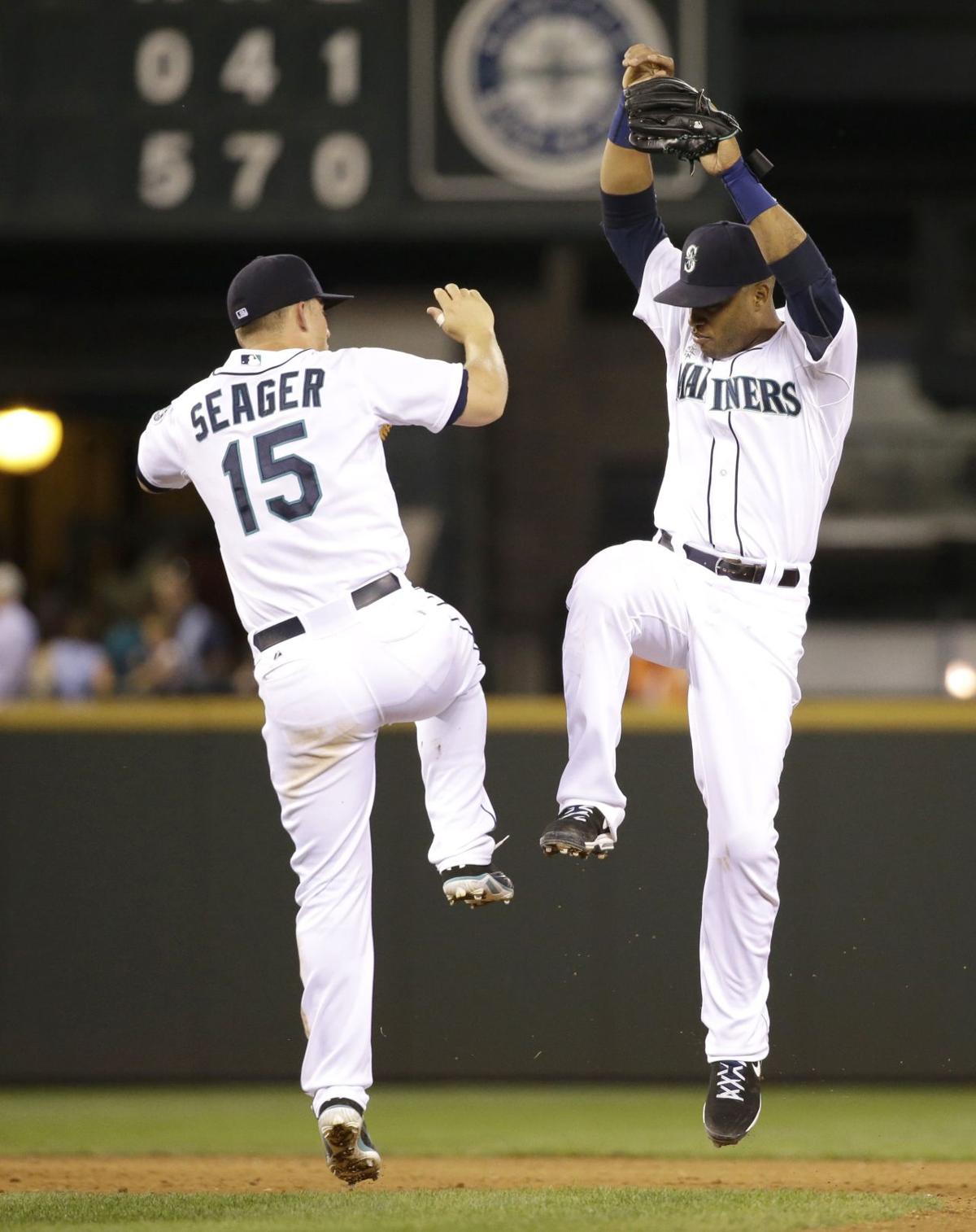 Seattle Mariners' Kyle Seager (15) and Robinson Cano share congratulations after the team beat the Texas Rangers in a baseball game Tuesday in Seattle. The Mariners won 5-0. 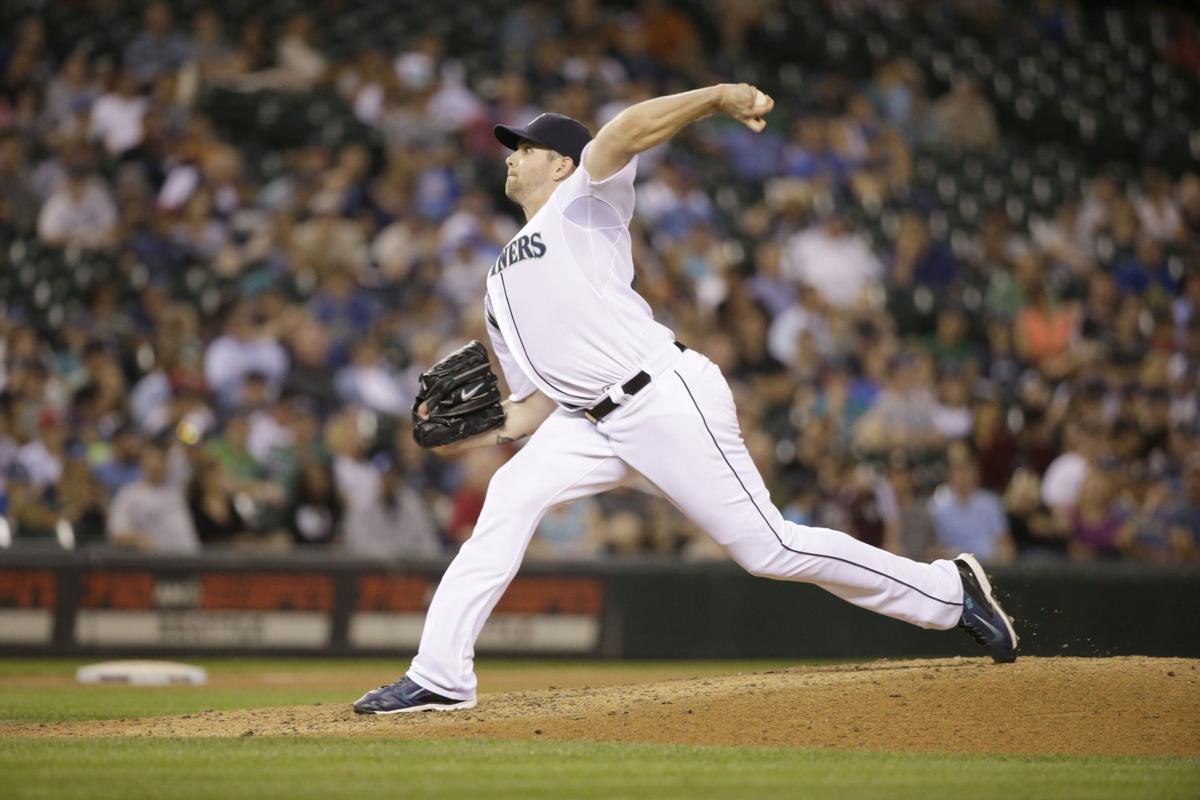 Seattle Mariners' Kyle Seager (15) and Robinson Cano share congratulations after the team beat the Texas Rangers in a baseball game Tuesday in Seattle. The Mariners won 5-0.

SEATTLE (AP) — The rust is starting to come off for James Paxton, and the rest of the American League might want to take note.

Given an early lead after Robinson Cano hit his 12th home run in the first, Paxton pitched into the seventh inning in a bounce-back start to lead the Seattle Mariners to a 5-0 win over the Texas Rangers Tuesday night.

Paxton threw a career-high 118 pitches and came an out away from tying his career high with seven innings pitched. The rookie lowered his ERA to 1.71, the best mark for a pitcher in his first 11 major league starts since 1990.

“He’s getting there, he’s not quite there as far as command is concerned, but I think stuff-wise, velocity-wise, yeah, he’s there,” said Mariners manager Lloyd McClendon of Paxton, who missed almost four months due to a strained back muscle.

“I feel like I’m getting closer with each start,” Paxton said. “I feel like my stuff is starting to come around.”

Cano’s towering two-out home run in the first opened the scoring and was his 71st RBI of the year.

Seattle broke open a two-run game in the fifth, with the big blow coming on a double by Endy Chavez, which drove in a pair. Dustin Ackley scored Austin Jackson later in the inning with a single.

“He just didn’t command the baseball the way he had been earlier,” Rangers manager Ron Washington said. “He couldn’t keep his fastball away like he wanted to, he couldn’t get his breaking ball over with consistency, and he left his changeup up a lot tonight. He just didn’t have his command.”

The Rangers put runners on the corners with two outs in the third after a review reversed a call at first base and negated an inning-ending double play. Alex Rios grounded out, though, to end the threat.

Texas failed to advance a runner past first base until Mike Carp took second on indifference in the ninth.

Danny Farquhar did not allow a hit in the final 2 2-3 innings for the Mariners.

The Mariners avoided back-to-back losses for the first time since losing four straight from July 22-25.

“We’re focused, we’re playing good baseball,” Chavez said. “We just need to continue to do that.”

Mariners: OF Chris Denorfia was scratched with a stiff neck a couple hours before to Tuesday’s game. Chavez replaced Denorfia in right field.

Rangers: Rangers OF Alex Rios will have his right thumb reevaluated on Wednesday. Rios has been dealing with a bruised thumb for a week and it was heavily wrapped after Tuesday’s game, but Washington said it was not the reason he pinch-hit for the veteran in the eighth. ... Texas still hasn’t announced RHP Yu Darvish’s season is over (elbow inflammation), but the likelihood that the Rangers ace pitches again during the 2014 season is diminishing given that it would take time to work back into game shape.

Mariners: Seattle planned to recall RHP Erasmo Ramirez from Triple-A Tacoma on Wednesday to start the matinee finale against Texas. Ramirez is 1-5 with a 4.04 ERA at the big league level this year, but hasn’t allowed more than two runs his last six outings.

Rangers: RHP Colby Lewis looks to avoid the first four-game losing streak of his career and propel Texas to a series win.

Mariners 2B Robinson Cano has five home runs in August, the most he’s had in any month this season.

Texas SS Elvis Andrus failed to reach base via a hit or walk, snapping a streak of 20 games against Seattle. Andrus had hits in 17 of the 20 games.