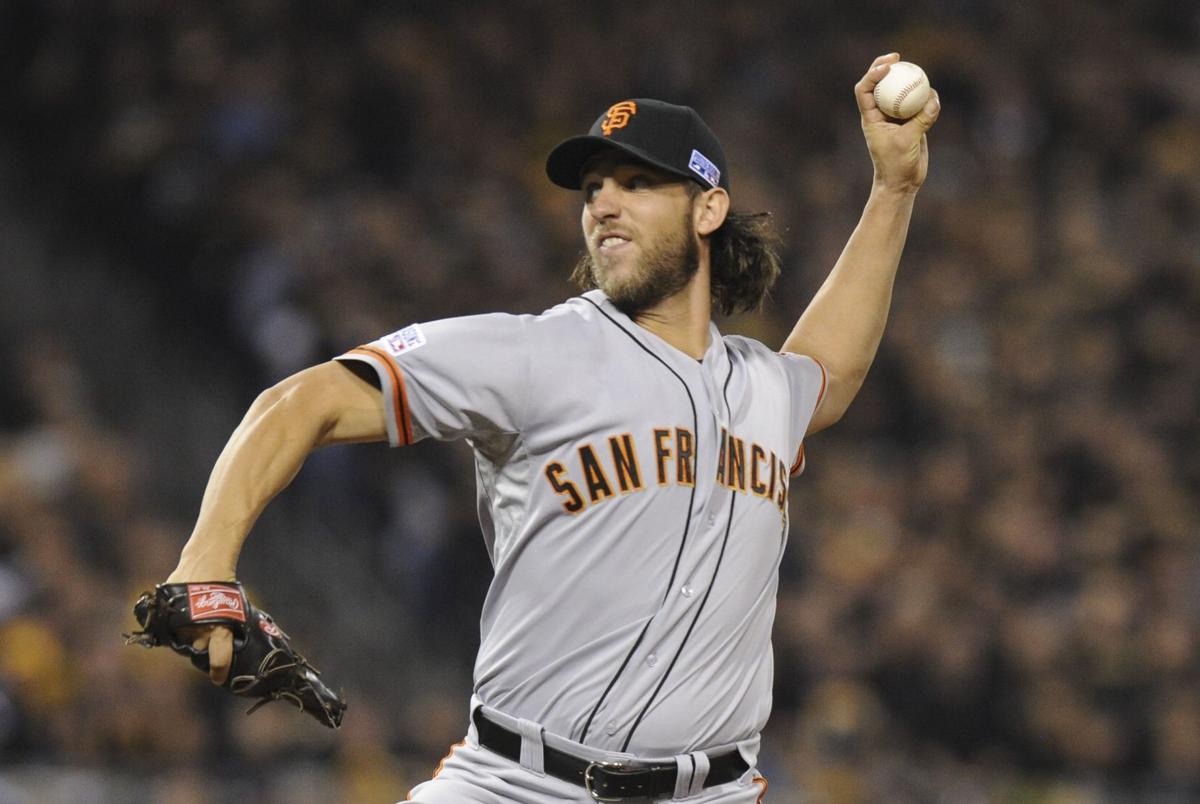 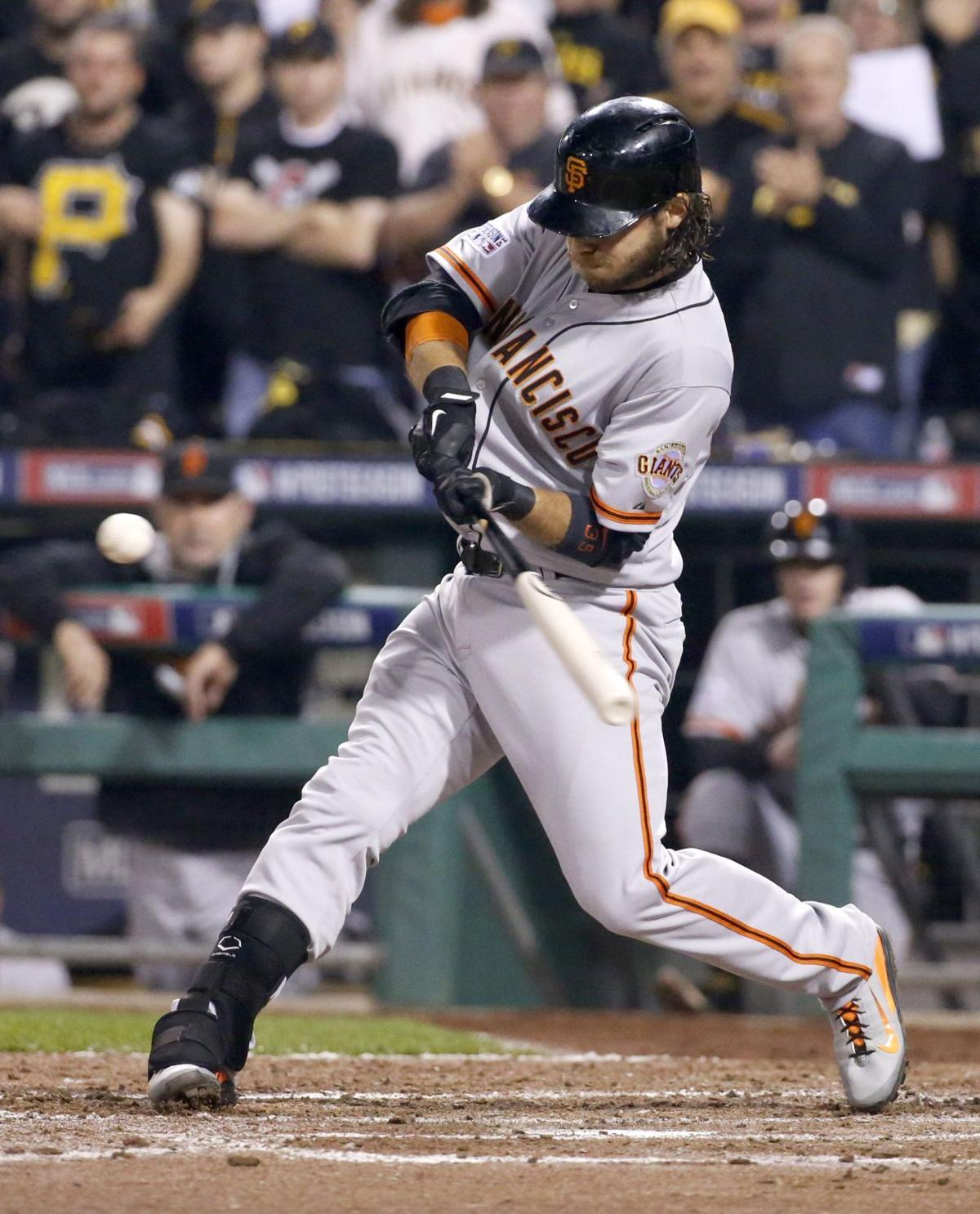 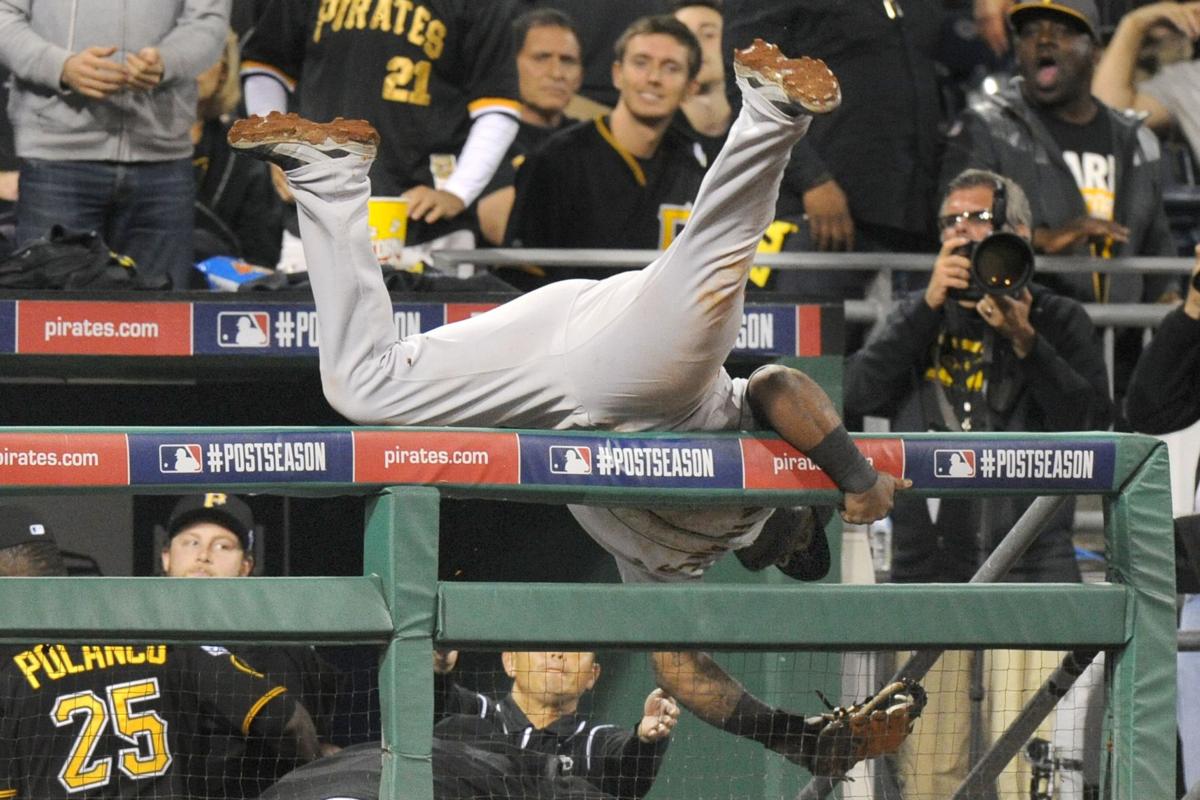 San Francisco Giants' third baseman Pablo Sandoval flips over the dugout railing after making a catch on a fly ball by Pittsburgh Pirates' Andrew McCutchen in the seventh inning of the NL wild-card playoff baseball game Wednesday in Pittsburgh.

San Francisco Giants' third baseman Pablo Sandoval flips over the dugout railing after making a catch on a fly ball by Pittsburgh Pirates' Andrew McCutchen in the seventh inning of the NL wild-card playoff baseball game Wednesday in Pittsburgh.

PITTSBURGH (AP) — Madison Bumgarner grabbed four beers, tilted his head back and chugged like a champion.

Then again, the San Francisco ace has plenty of practice.

The Giants celebrating in a soaked clubhouse on the road? Must be October. Next stop: Washington.

Bumgarner dominated the Pittsburgh Pirates in an 8-0 whitewash in the National League wild-card game Wednesday night, tossing a four-hitter as the Giants advanced to best-of-five Division Series in Washington starting Friday.

“If you don’t want to pitch in these games, you probably need to find something else to do,” Bumgarner said.

No chance of the Giants doing that anytime soon. They’ve ended each even year this decade with a World Series title. The quest for a third to join the championships they captured in 2010 and 2012 began in familiar fashion, with a lights-out performance on the mound and enough offense to get by.

“We thrive in these situations,” shortstop Brandon Crawford said. “I don’t know what it is. We just keep fighting no matter what the circumstance.”

The Giants won their eighth consecutive postseason game — dating back to the 2012 NL championship series when they rallied from a 3-1 deficit to stun St. Louis — and seventh straight with their season on the line — including the division series against Cincinnati that year. The memories of that run remain fresh in a clubhouse that seems to thrive once the games start to dwindle.

“We’ve been through it before, a lot of this team has,” Brandon Belt said. “We used that experience tonight. We know when we get in these situations we’re going to have a good ballclub.”

San Francisco will need to rely on that experience when they face the red-hot Nationals. Washington won the season series with San Francisco 5-2, though it won’t matter much when they square off in Game 1.

“It’s a different time of year,” Belt said. “It’s a playoff atmosphere. We know we’re a good team but so are they. We know we’ve got to go against them and not make any mistakes.”

The Giants didn’t make any on Wednesday, not with Bumgarner doing his thing.

Mixing his fastball with a slider and curve the Pirates rarely touched, Bumgarner was in complete control and looked very much like the ace who won 18 games during San Francisco’s bumpy regular season.

“We got outplayed tonight,” Pittsburgh second baseman Neil Walker said. “Bumgarner went out there, he did what he wanted to do. He put up the strike zone and he made it tough on us.”

So did Crawford, whose grand slam off Edinson Volquez in the fourth inning was the first in postseason history by a shortstop — and he wasn’t aiming for the fences.

With the bases loaded in the fourth and nobody out in a scoreless game, Crawford turned on Volquez’s hanging breaking ball and sent it to right. Pittsburgh’s Travis Snider waited to play it off the wall. He never got the chance, instead slumping his shoulders as the ball landed a couple of rows deep to give the Giants a 4-0 lead that felt considerably larger.

“I was in shock a little bit,” Crawford said.

So were the Pirates, who never recovered. One night after Kansas City edged Oakland in a thrilling start to baseball’s postseason, this one was over by the middle innings.

Overpowering one of the NL’s best lineups, Bumgarner walked one and threw 79 strikes in his latest stellar October performance. The big left-hander, who allowed only four singles, has thrown 15 scoreless innings in two World Series starts.

Volquez was trying to cap his comeback season by sending Pittsburgh to the NLDS for the second straight year, but he couldn’t match Bumgarner.

The right-hander cruised until the fourth, when a pair of singles and a walk loaded the bases with none out. He’d retired Crawford 19 of the 22 times he’d faced him during his career.

It’s the 24th that he’ll remember.

“I tried to bounce it down, back foot, and the ball just kept going,” Volquez said. “Bad spot.”

That was more than enough for Bumgarner. Pittsburgh, fourth in the majors in extra-base hits this season, rarely hit the ball hard.

Bumgarner was helped by his defense, too. Third baseman Pablo Sandoval — all 245 pounds of him — flipped over the railing in front of the Pittsburgh dugout to track down a foul popup off the bat of Russell Martin.

Sandoval landed on his feet, a perfect symbol of San Francisco’s seemingly endless resiliency when October rolls around.