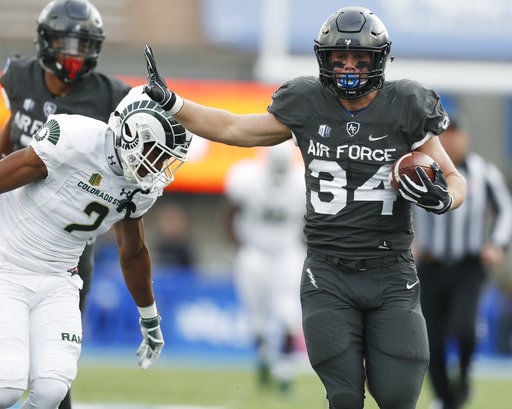 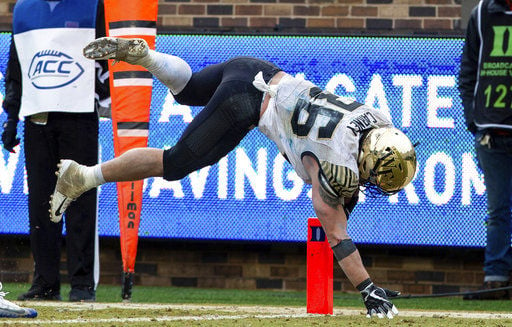 Wake Forest's Cade Carney dives for a touchdown late in the second half of an NCAA college football game against Duke in Durham, N.C., Saturday, Nov. 24, 2018. (AP Photo/Ben McKeown) 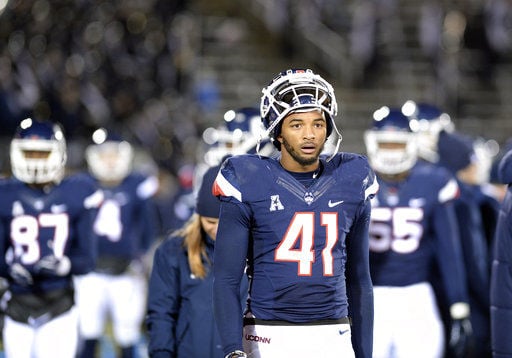 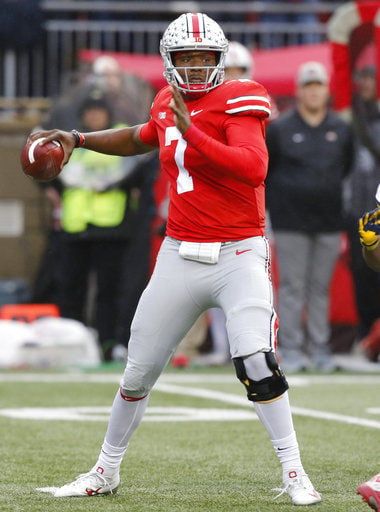 Wake Forest's Cade Carney dives for a touchdown late in the second half of an NCAA college football game against Duke in Durham, N.C., Saturday, Nov. 24, 2018. (AP Photo/Ben McKeown)

Air Force's Cole Fagan is the pride of fullbacks this week.

Fagan had career highs of 34 carries for 260 yards against Colorado State for the top rushing performance in the Football Bowl Subdivision over the past week and the best by a fullback in Falcons' history.

Fullbacks, of course, thrive in the triple-option offenses run by the service academies and Georgia Tech. The position otherwise has been in decline for years. Though 30 of the 130 FBS programs list fullbacks on their depth charts, only three players at the position in non-option offenses have more than 20 carries this season.

Fagan, who broke the Air Force fullback record of 213 yards by Andy Smith in 1988, turned in the school's first 200-yard rushing game since Arion Worthman had 215 against San Jose State in 2016.

The 6-foot-1, 230-pound junior finished the regular season with 997 yards, most in the nation by a fullback.

Other 200-yard performances this past weekend:

Freshman Juma Otoviano, in his first start for Rice, ran for 224 yards against Old Dominion as the Owls ended an 11-game losing streak.

Connecticut's defensive averages of 50.4 points and 617.4 yards per game are worst of all time in the FBS.

Louisiana-Lafayette held the previous record for average points allowed, at 50.2 in 1997. The Huskies (1-11) were far worse than the previous record-holder for yards allowed. That was Kansas, which surrendered 560.8 per game in 2015.

Ohio State's Dwayne Haskins set Big Ten single-season records for touchdown passes and passing yards. His six TD passes against Michigan gave him 42, two more than Drew Brees had for Purdue in 1998. His pushed his season passing total to 4,081 yards, ahead of the 3,985 by Purdue's Curtis Painter in 2006.

Central Michigan's Jack Sheldon punted 15 times against Toledo, the most in a game since Rutgers' Michael Cintron punted 16 times against Michigan in October 2016. Sheldon finished the regular season with 89 punts, most in the nation, for the 1-11 Chippewas.

Washington's Jake Browning threw 196 career passes inside the opponent 20 without an interception before Washington State's Skyler Thomas's pickoff in the first quarter Friday.

STAT OF THE WEEK

California converted just 1 of 17 third downs against Colorado  and won. The Bears matched Rice for most third-down opportunities with only one conversion.