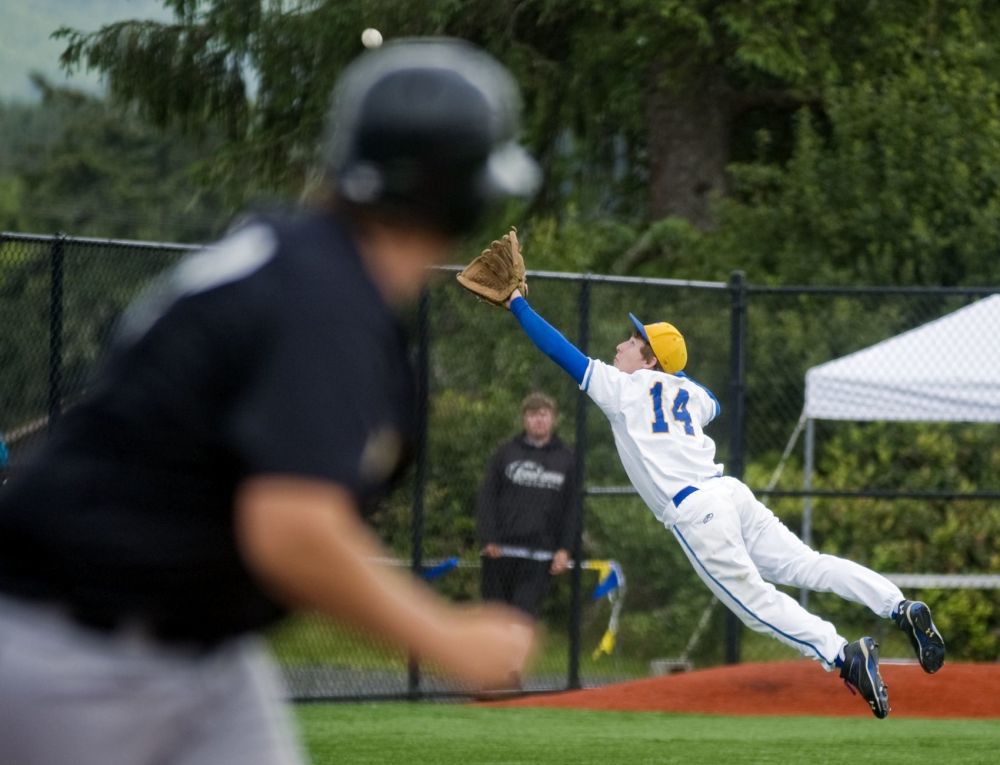 <p>Knappa's Andrew Goozee lays out to make the diving catch on a ball hit into foul territory near third base. The Loggers took care of business Wednesday defeating Lost River 25-1 at Seaside's Broadway Field.</p> 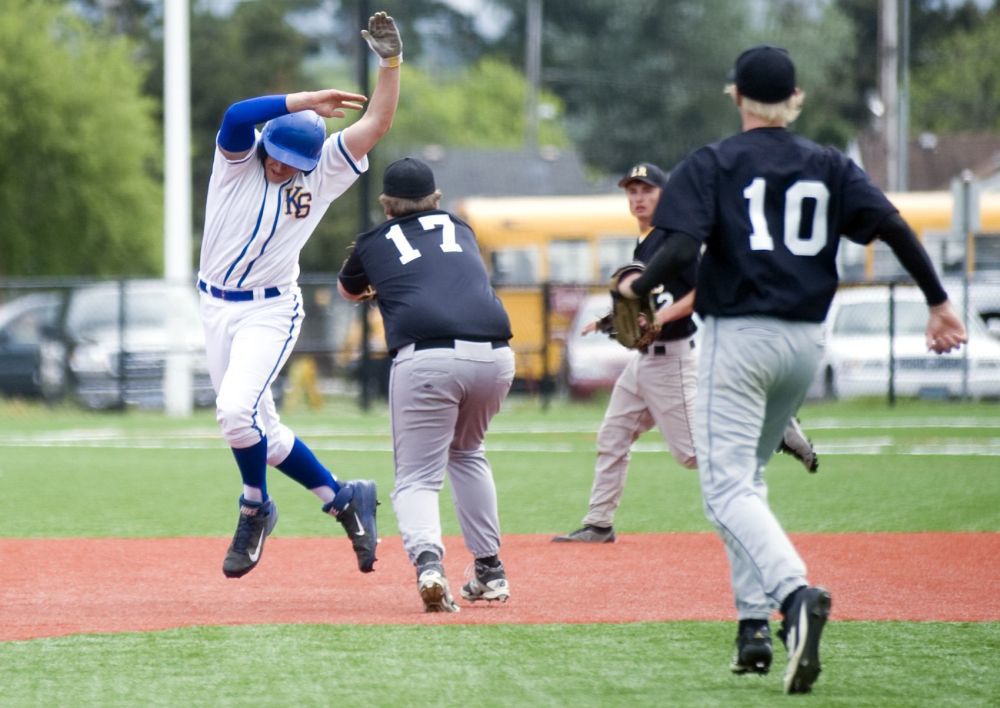 <p>Knappa's Nate Truax is called out while attempting to avoid the tag from Lost River third baseman Tanner Girtman.</p> 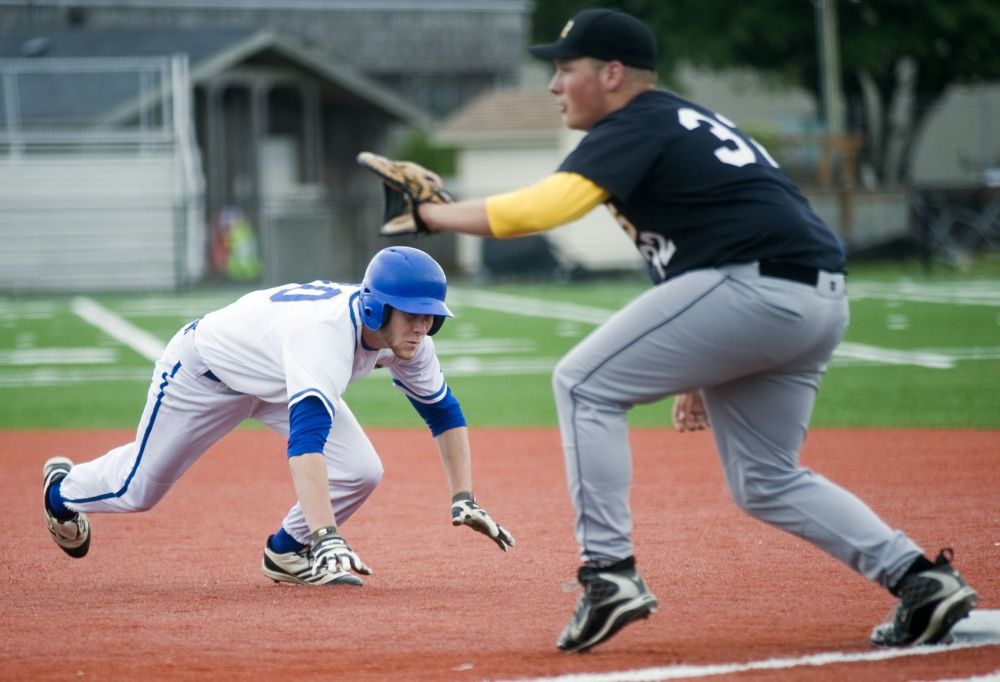 <p>Knappa's Austin Palek scrambles back to first base to avoid a pick-off attempt by Lost River. Palek was active on the base paths, coming up with four steals.</p> 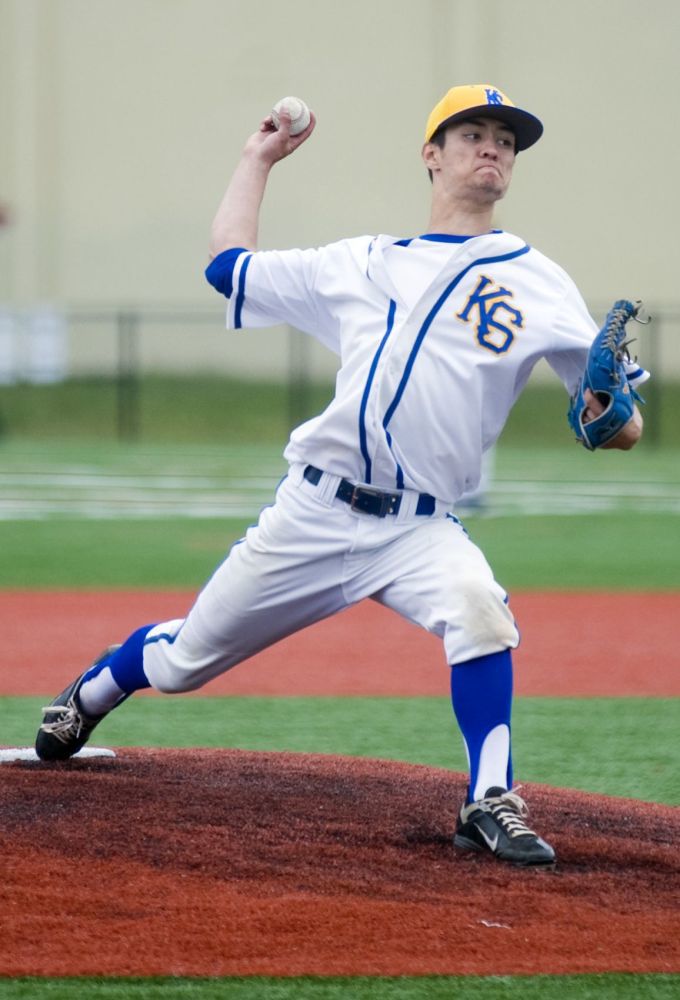 <p>Knappa's Andrew Goozee lays out to make the diving catch on a ball hit into foul territory near third base. The Loggers took care of business Wednesday defeating Lost River 25-1 at Seaside's Broadway Field.</p>

<p>Knappa's Nate Truax is called out while attempting to avoid the tag from Lost River third baseman Tanner Girtman.</p>

<p>Knappa's Austin Palek scrambles back to first base to avoid a pick-off attempt by Lost River. Palek was active on the base paths, coming up with four steals.</p>

SEASIDE  Its nice to be back. Thats what the Knappa Loggers were probably telling themselves after Wednesdays 25-1 victory over Lost River, in a first-round game of the Class 2A state baseball playoffs.

The game was played at Broadway Field, after wet weather forced the move from Knappa to Seaside.

The Loggers  winners of 27 straight and the favorite to win it all June 6 at Volcanoes Stadium  had not played since May 16. They had plenty of practice time over the nearly two-week layoff, most of it outdoors.

We kept our cool during those two weeks, said Knappa junior Andy Miller, Wednesdays winning pitcher. We had good practices every day, and we were ready for today, for sure. We were all ready for a playoff atmosphere game, and we came out fired up.

Indeed, the Loggers scored five runs in their first at-bat and racked up 20 hits in six plate appearances, with just one error defensively.

Toss in another oh-by-the-way no-hitter (Miller, Tyson Burnard and Chase Rusinovich combined for eight strikeouts and three walks), and the Loggers are looking unbeatable.

More good news  Knappa will face Portland Christian in Fridays quarterfinal, a team the Loggers swept 3-0 during the league season.

The winner will face either Weston-McEwen or Umpqua Valley Christian in the semifinals.

That will be a fun, good game against the Royals, Miller said. Im looking forward to it.

Miller pitched five solid innings, with five strikeouts and two walks before giving way to Burnard in the sixth and Rusinovich in the seventh.

The Raiders, meanwhile, had lost 12 of their previous 16 games coming into Wednesdays playoff, and finished 6-14 overall in the regular season.

Ranked 38th out of 50 teams at the 2A level, Lost River was ranked below Northwest League teams Portland Christian, Gaston, Portland Lutheran, Faith Bible, Vernonia and Nestucca  all of whom went a combined 0-18 against Knappa this season.

In other words, Lost River had no chance against the states No. 1-ranked team.

The first sign of trouble for the Raiders in Wednesdays game came in the bottom of the first, when the Loggers reached base on a walk, a double by Burnard, a run-scoring double from Noah Kinney (an error allowed another run to score), and an RBI single by Austin Palek.

Lost River finally recorded an out, then walked Jason Miller and gave up a two-run single to Nate Truax, giving Knappa a quick 5-0 lead.

A few bloopers on the base paths led to the Loggers stranding 12 runners for the game, but the game was well decided by then.

On the mound, Andy Miller faced just 10 batters over the first three innings.

My change-up was working really good today, he said. I felt good about it.

The Loggers added a little power to their game in the bottom of the third, highlighted by a double from Squints Palek, a two-run triple by Andy Miller, a run-scoring single from Burnard and a triple to left field by Kinney that helped Knappa take a 10-0 lead.

Miller said the Loggers will face their share of competition, eventually, and theyll have to win with pitching and defense.

Definitely, he said. Were probably not going to score 25 runs every game. We just have to keep throwing strikes and keep doing what were doing.

Notes: Of all the schools that made the Sweet 16 in 2007, only two have returned to the final 16 every year since then  Lost River and Knappa.

By comparison, only five teams in Oregon (1A through 6A) have scored 300 or more.

The Loggers have also given up just 74 runs, the second-fewest in 2A baseball. Kennedy has allowed 73. Kennedy gave up 14 of those runs to Knappa, in a 14-13 loss to the Loggers March 26.

Knappa has a 5-0 record against teams in the final eight.

Palek, Cameron Players of the Year

Knappa baseball and softball players have been dominant on the diamond in 2014. Knappas Kacie Cameron was named the Northwest Leagues Player of the Year for softball, and senior Austin Palek took home a share of the MVP award for baseball.

The Loggers landed seven players on the Northwest All-League baseball team, including one freshman, one sophomore and four juniors.

PHILOMATH  The Philomath Warriors worked their way out of a tough bases-loaded, no-outs jam in the top of the sixth, and held on for a 5-4 win over Astoria Wednesday, in a Class 4A first-round state playoff game at Philomath.

The Fishermen end their season at 16-8 overall, while the Warriors (16-9, winners of eight in a row) advance to face Henley in the quarterfinals.

We were one hit away from the quarters, said Astoria coach Dave Gasser, whose team held a 3-1 lead through 4 1/2 innings, before giving up four in the bottom of the fifth.

We just couldnt quite get over the hump, he said. It wasnt through a lack of effort. Our guys competed, and Im proud of every one of them. We started three freshmen and three sophomores, and we played good defense all year. We were tough to score on, and thats a great tribute to our practice habits and some young kids who handled the pressure very well.

And we had some key seniors who did a wonderful job of making sure the young ones kept up.

Astoria scored two runs in the third, as freshman Kyle Strange beat out an infield single and scored on a double to center by Nick Strange, who scored moments later on a grounder by Chris Leonardi.

The Fishermen manufactured another run in the fifth, when Nick Strange singled to left field, then scored on a base hit by Ole Englund for a 3-1 lead.

The Warriors answered in the bottom half of the inning, which started with a leadoff triple by Joe Noble, who went 2-for-4 with two runs scored.

Jack Klipfel drove in Noble with a single, Klipfel sprinted home on a base hit by Ben DeSaulnier, and a two-out double to left field by Eric Sinclair brought in two runs for a 5-3 lead.

Sinclair was making his first start of the season, after suffering a stress fracture in his foot during wrestling season.

Astoria added a run in the sixth when Fridtjof Fremstad scored on an infield single by Trevir Mayfield, and the Fishermen loaded the bases with no outs.

DeSaulnier, the Philomath starter on the mound, got the Fishermen on two straight infield pop-ups, followed by a ground-out to get out of the inning.

DeSaulnier went six innings and eventually picked up the victory, scattering six hits with seven strikeouts and two walks. Walter Brattain  the Oregon West Conference Pitcher of the Year  came in the seventh and retired three of the four batters he faced.

BONANZA  Knappas run of bad luck in the state playoffs continued Wednesday, as Bonanza topped the Lady Loggers 6-3 in a Class 2A first-round state playoff contest.

We played a good game  just too many mental errors, said Knappa coach James Nichols, as the Loggers fall to 0-for-6 in the state playoffs over the last six years.

Knappa pitcher Kacie Cameron allowed nine hits with eight strikeouts, while Jasmine Reynolds and Maddy Pitts each had two hits, including a double. Stacey Aho also had a double for Knappa, which finishes 18-10 overall, while Bonanza (23-6) advances to host Central Linn Friday.