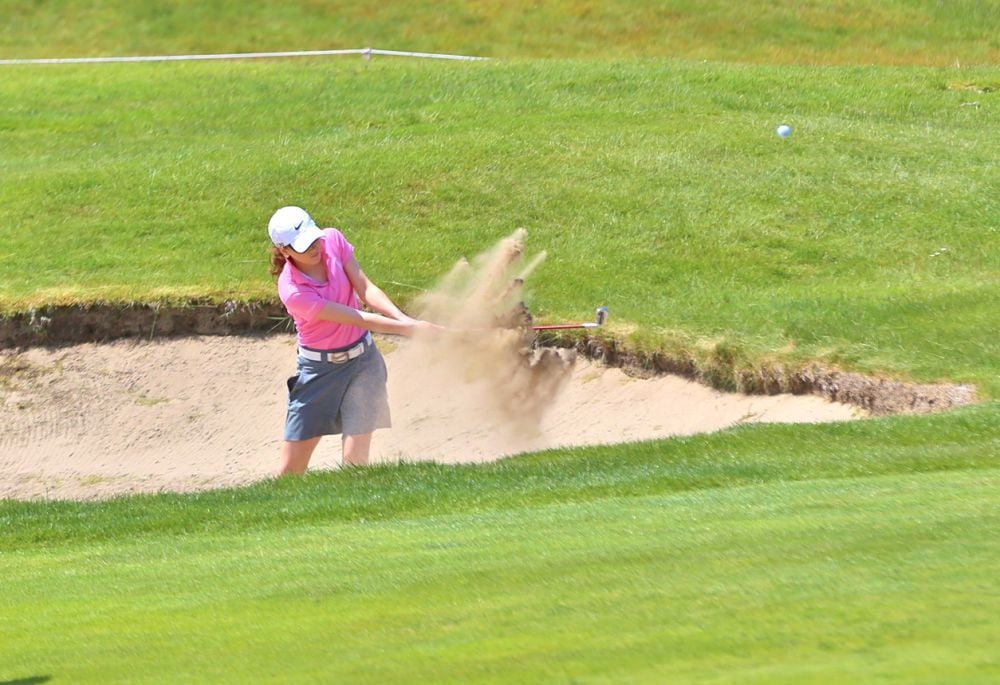 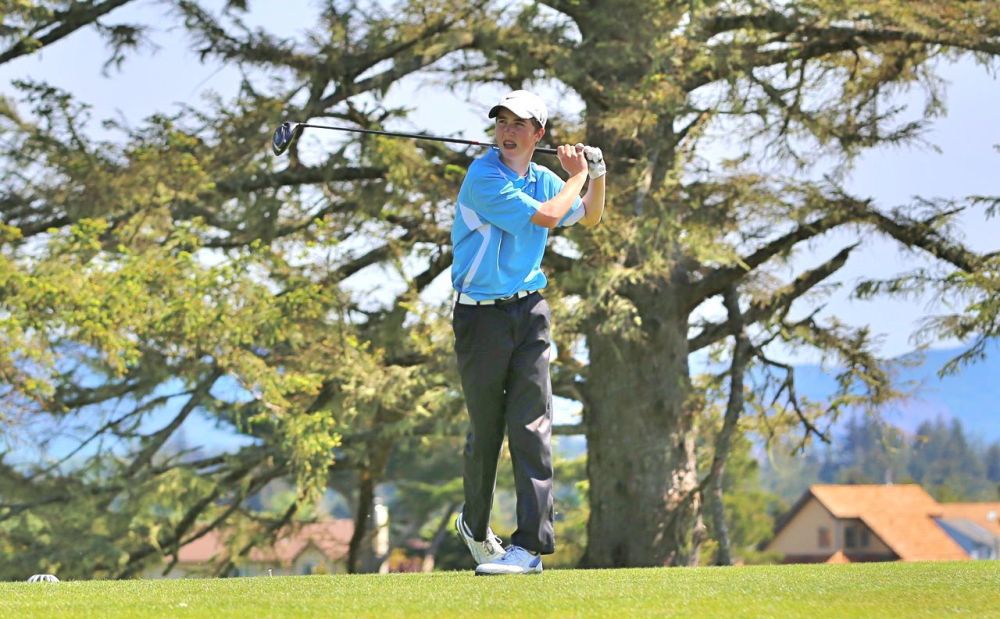 <p>Sam Hinton, Seaside High golfer, won the individual league title for District 1/4A. He shot 77 on the second day of the two-day competition, for a total of 155.</p>

<p>Sam Hinton, Seaside High golfer, won the individual league title for District 1/4A. He shot 77 on the second day of the two-day competition, for a total of 155.</p>

The District 1/4A boys golf title is finally back with Seaside.

The Gulls built a nice lead after one round, then finished it off with a 328 on Day 2 at Quail Valley Golf Course to finish with a final-round score of 655  83 strokes better than runner-up Scappoose (738), which edged third-place Banks (739) by just one stroke. Tillamook shot a 769 and Astoria posted a 792.

Seaside dominated the Cowapa this season, winning all of its dual matches, in addition to the district title. The Gulls should own the league for the next few years, with all of their golfers returning next season.

Seaside junior Sam Hinton shot 77 on the second day for a 155 total, as he edged out last years medalist, Riley Philippi, of Banks, by just two strokes for the league individual title.

All five Seaside players made the all-league team as Aaron Richardson tied for third (161), Shane Fritter took fifth (163), Trenten Meyer shot 176 for eighth and Donald Zwahlen finished ninth with a 186.

Will Keeran had the top score for Astoria, but the Fishermen ended up out of the running for a state qualifier. Joey Voeller and Tucker Johnson tied with a 190.

We had two good days of golf, said Seaside coach Jim Poetsch. We are playing some really good golf at the right time of the year. It is great to get the league title back in Seaside, and we are looking forward to what promises to be an exciting state tournament.

Sam had a great tournament and went head-to-head with a guy that used to be the best in the league. Now he gets to claim that title.

Hinton said, It was so cool to see all five of us in the top 10 with three in the top five. We played well as a team. My goal all season long was to win this event, and to do that along with the whole team doing well is a bonus.

It was great to finally play to my potential along with the team, Richardson said. But this was just a bump in the road, and now we have to go accomplish our final goal.

Fritter added, It was good to see Sam get what he worked so hard for by winning the individual. I have been close, putting some good rounds together. Also, Donald is starting to come around and starting to shoot low. Our team is very close to being able to achieve our goal.

Meyer said, Overall, it was two solid scores for us at district. We are in great position heading into the state tournament.

Zwahlen quipped, As a senior I am glad that my team made it to state. It was really helpful with a team full of great golf players. All we can do is improve from here.

Seasides Katy Kawasoe has been all of the above over the last four years, as the senior clinched her fourth straight individual district title Tuesday at the Astoria Golf & Country Club.

It was definitely one of my biggest goals in high school, so I was really excited to get it, said Kawasoe of her fourth straight district crown.

I havent played in a ton of tournaments this year, with the rain and everything, she said. Ive been playing all right, but I wasnt scoring very well. So I was kind of nervous, but confident. I was just trying to focus and hit the greens and play hard today.

With a second-place team finish behind Scappoose, Seaside will send its entire team to state, while Astorias Chloee Hunt was also a state qualifier, as she finished in a fifth place tie on the leaderboard at 219, just one stroke ahead of the next golfer.

Kawasoe held an 18-stroke lead after Mondays first round, then shot an 83 Tuesday to finish with a two-day total of 161. Syrina Revis of Scappoose was a distant second at 192.

Kawasoe had a birdie on the third hole and had a 39 on the front nine, and followed with a 44 on the back.

I had a really good front nine, and then I didnt do as well as I wanted to on the back, she said. But I still took care of business. I made a lot more putts (Monday). My short game kind of fell apart today  that was the only problem.

Kawasoe had a 37 on the front nine of Mondays round at Gearhart Golf Links, which included her highlight shot of the tournament.

I had a bogey on five, and then on six, I hit my drive into a sand trap on the right side. I had about 130 yards to the green, and I took a 7-iron and hit it about 10 feet from the hole. That was pretty exciting, and definitely the highlight of both days.

Scappoose was finally able to take the district team title away from the Lady Gulls, as the Indians finished with an 822 team score, to Seasides 868. Both teams plan to participate in the Class 4A state tournament at Trysting Tree Golf Club in Corvallis.

The Gulls will be taking part in the state tournament for the 16th time in the last 17 years.

While her teammates (Caroline Kotson, Cadyn Carr and Kaylea Roberson) will be making their state tournament debuts, Kawasoe will be there for the fourth and final time.

This stage of Kawasoes competitive career will come to a close, as she heads off next year to Syracuse University, which does not have a womens golf program.

I just want to play good at state, and shoot two consistent good scores  and just to have fun, since this is my last year and my last big tournament of high school, said Kawasoe, who feels like shes playing the best golf of her career.

I feel like that. If I could just make some more putts, Id be getting a lot better scores. I feel like Im playing pretty solid.

The first two runs belonged to Seaside, and the next 12 belonged to Astoria May 13 at Broadway Field, as the Fishermen cruised to a five-inning, 12-2 win over the Gulls in a Cowapa League baseball contest.

While Seaside was playing its second game in two days, the Fishermen were just beginning a stretch of four games in four days.

Seasides first four batters of the game reached base  a walk to Aaron Tadei, a run-scoring triple by Kevin LaCoste, an RBI double by Zach Quicke and a walk to Nick Richardson.

The Gulls also had a runner at third with no outs, but failed to score.

The Fishermen quickly tied the game in the top of the second, as Carter Wallace had a single for the first of his four hits, and later scored on a fielders choice hit by Nick Scott; and Fritz Fremstad scored on a sacrifice bunt by Kai Brown.

Scott added a two-run double in the third, and the Fishermen erupted for eight runs in the fifth.

Trevir Mayfield had a two-run single, Kyle Strange drove in a run, and Chris Leonardi delivered the big blast with a line drive to center field that got past the Seaside outfielder.

Nick Strange and Ole Englund scored on the play, and Leonardi won the race around the bases for an inside-the-park homer.

On the mound, Leonardi and Nick Strange combined on a five-hitter. Zach Quicke had a single and a double for Seaside.